Imola Red. Named for the famed racing circuit that plays home to the Italian Grand Prix, it represents one factor: speed, and it has become a cult favorite of BMW fans since its first appearance on the E36 M3 GT. It is, by most measures, a rare color, no matter the chassis it is offered upon, old or new. Both the color's aesthetic and history are fitting, though, for the F10 M5, introduced in 2011 as the fifth-generation of the iconic sports sedan. Heralded as the fastest sedan on Earth (yet again,) the F10 M5 has left a mark on the world of performance and sports tuning, with 553 horsepower on tap and power delivery that leaves almost anything, save for exotics, in the dust. For Ravi Dolwani, of CSF, it was the perfect platform to polish and perfect. 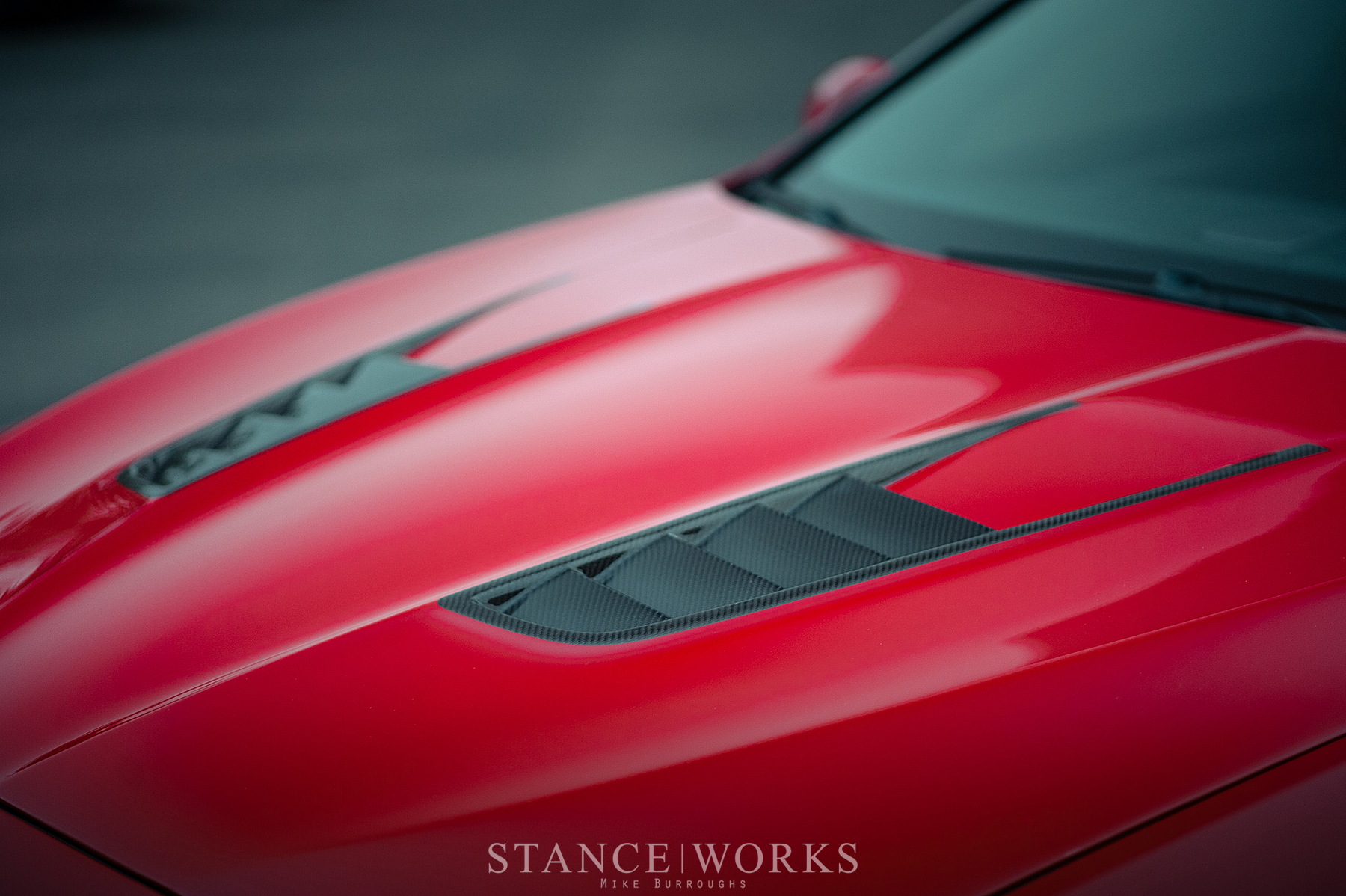 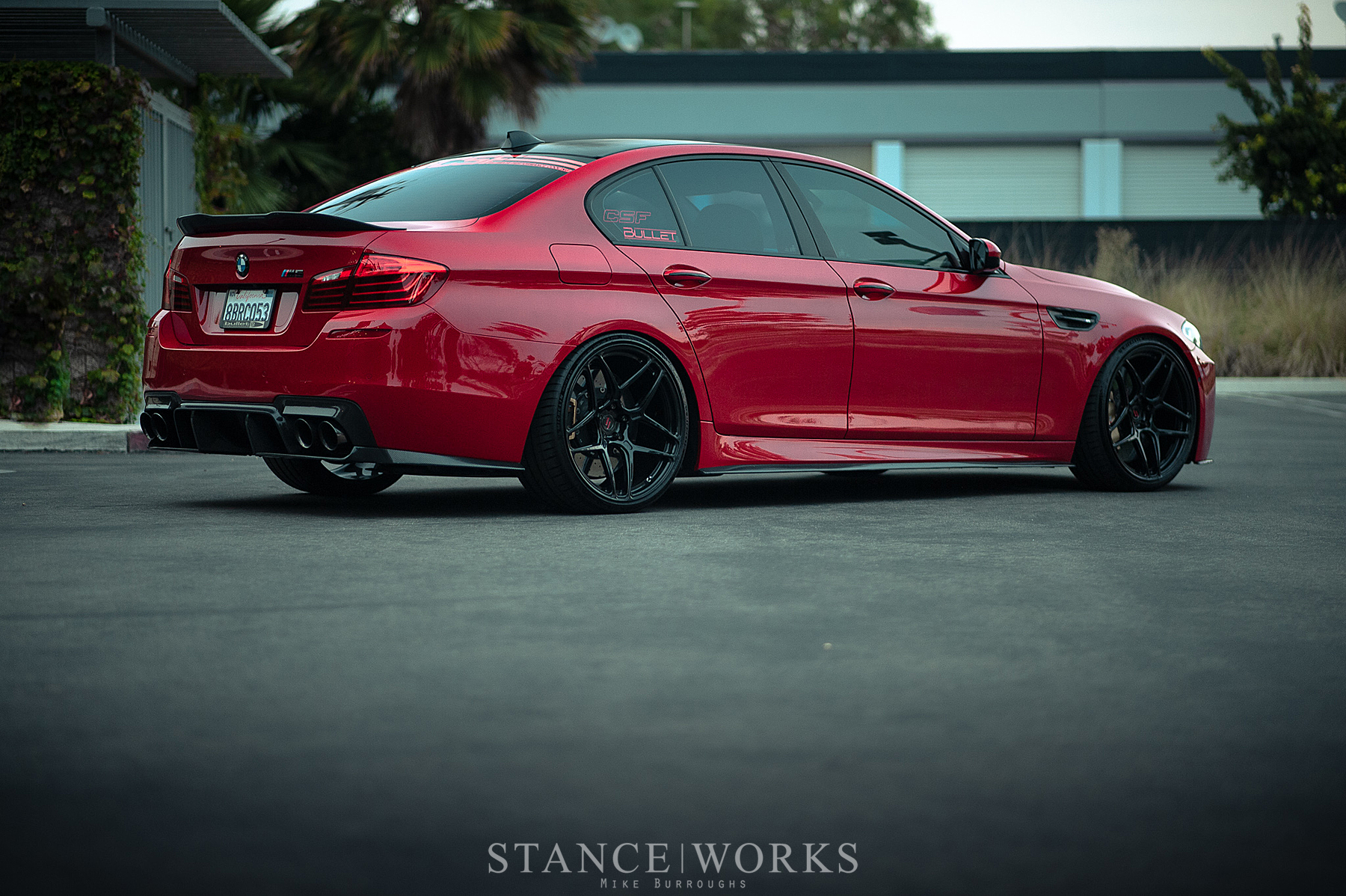 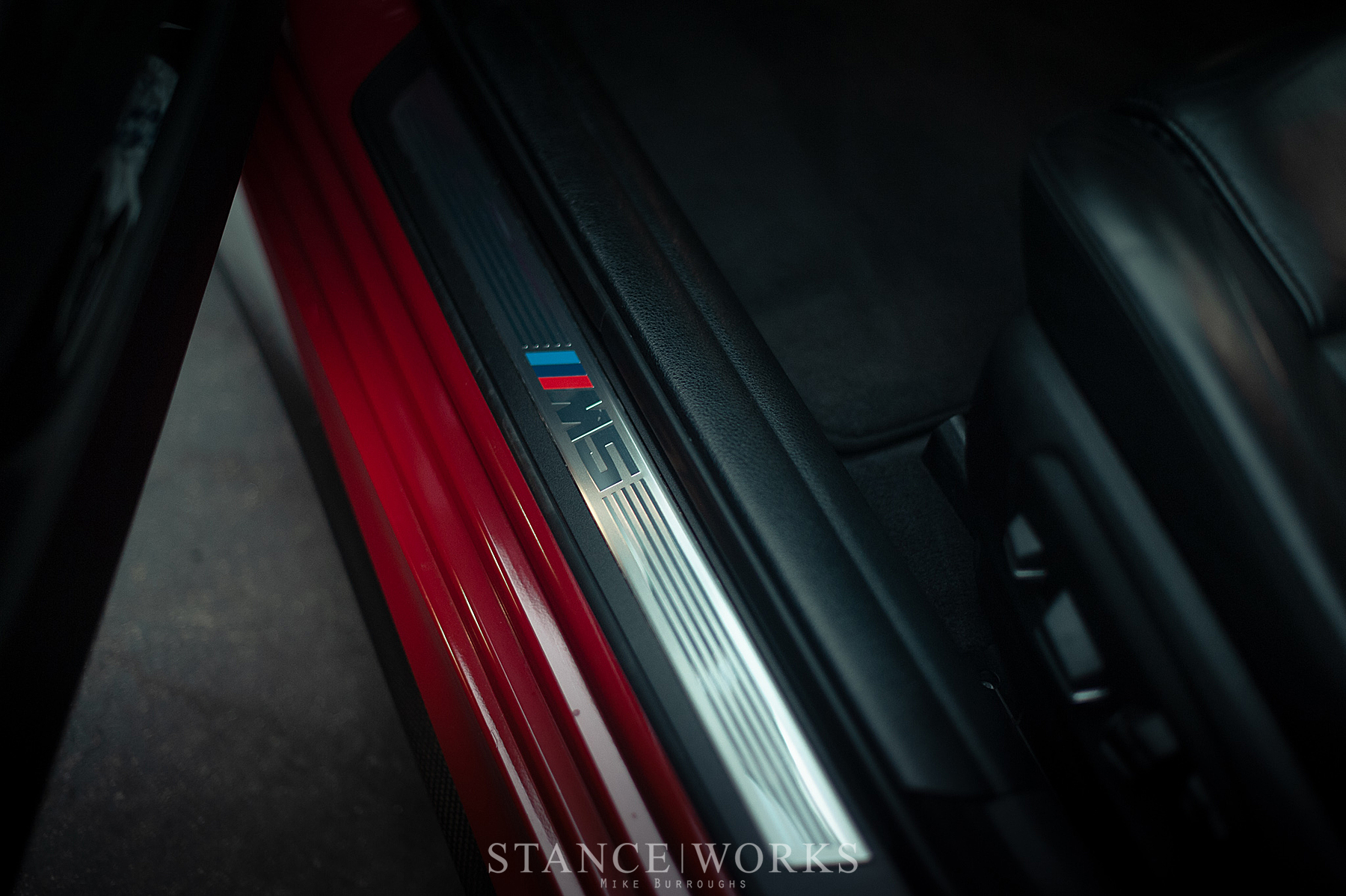 Finding an Imola Red M5, for starters, is no easy task. In a sea of examples that are mostly white, black, or somewhere loosely in between, the Italian red is a standout color that commands attention, and often, a price premium. Once acquired though, the pedal was pushed to the floor, both literally and figuratively, as Ravi sought a way to improve the output of the sedan without sacrificing daily drivability. As the owner and head of CSF's Racing and High Performance division, he pooled his resources and developed the liquid-to-air charge coolers alongside PureTurbos, which sit front-and-center in the engine bay, finished in Fire Engine red with hammer-texture clear coat. Around them sits a pair of RK Autowerks carbon fiber cold air intakes. Playing opposite is a set of Evolve Automotive catless downpipes, routed out to an FI Exhaust valvetronic cat-back system. In conjunction with a VF Engineering HEX Stage 2 tune, the sedan now pumps out a wildly impressive 628 horsepower to the rear wheels. With sticky 305 Michelin PS4S tires in the rear, the power is planted firmly, launching the M5 forward with fervor. 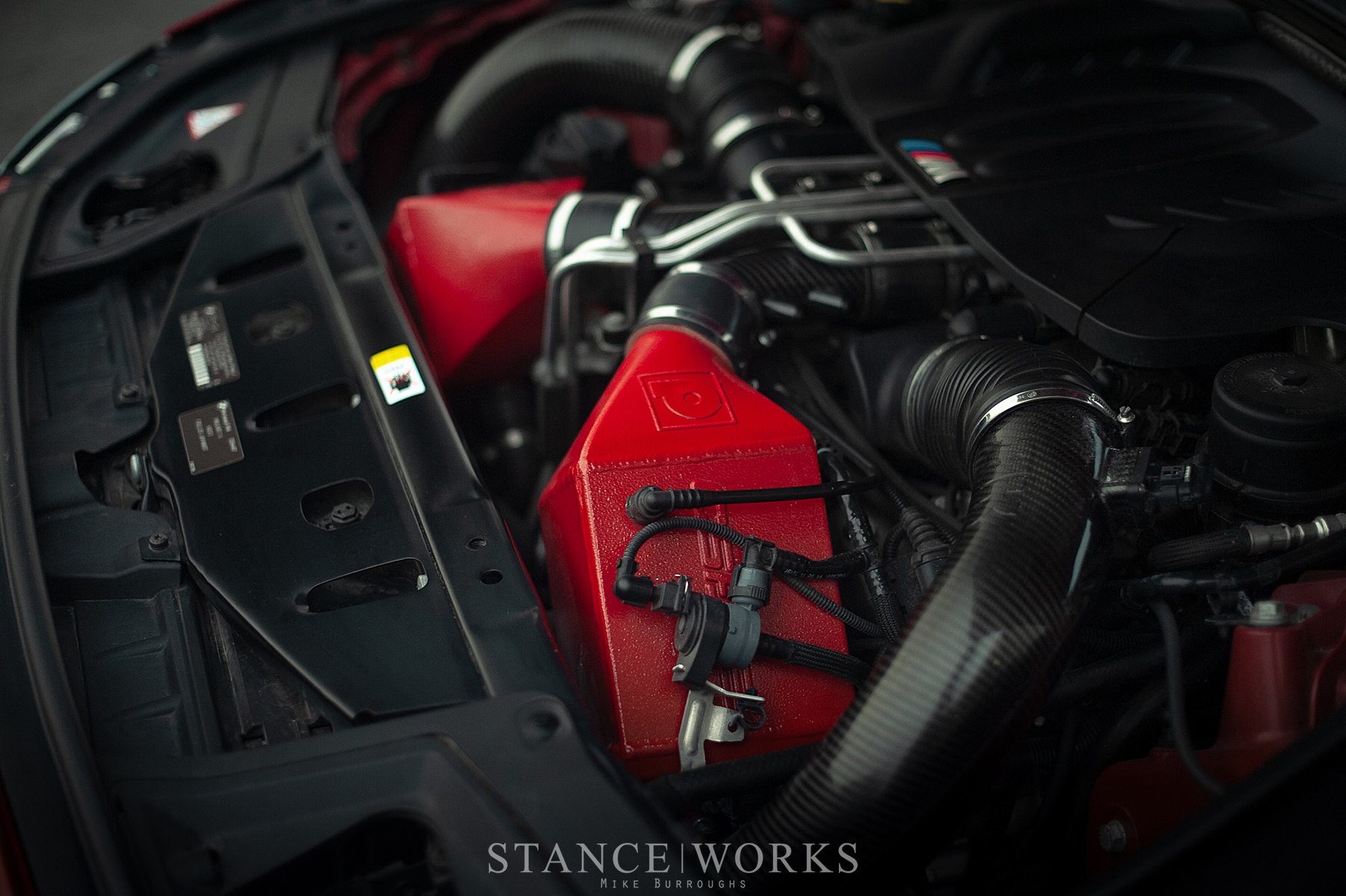 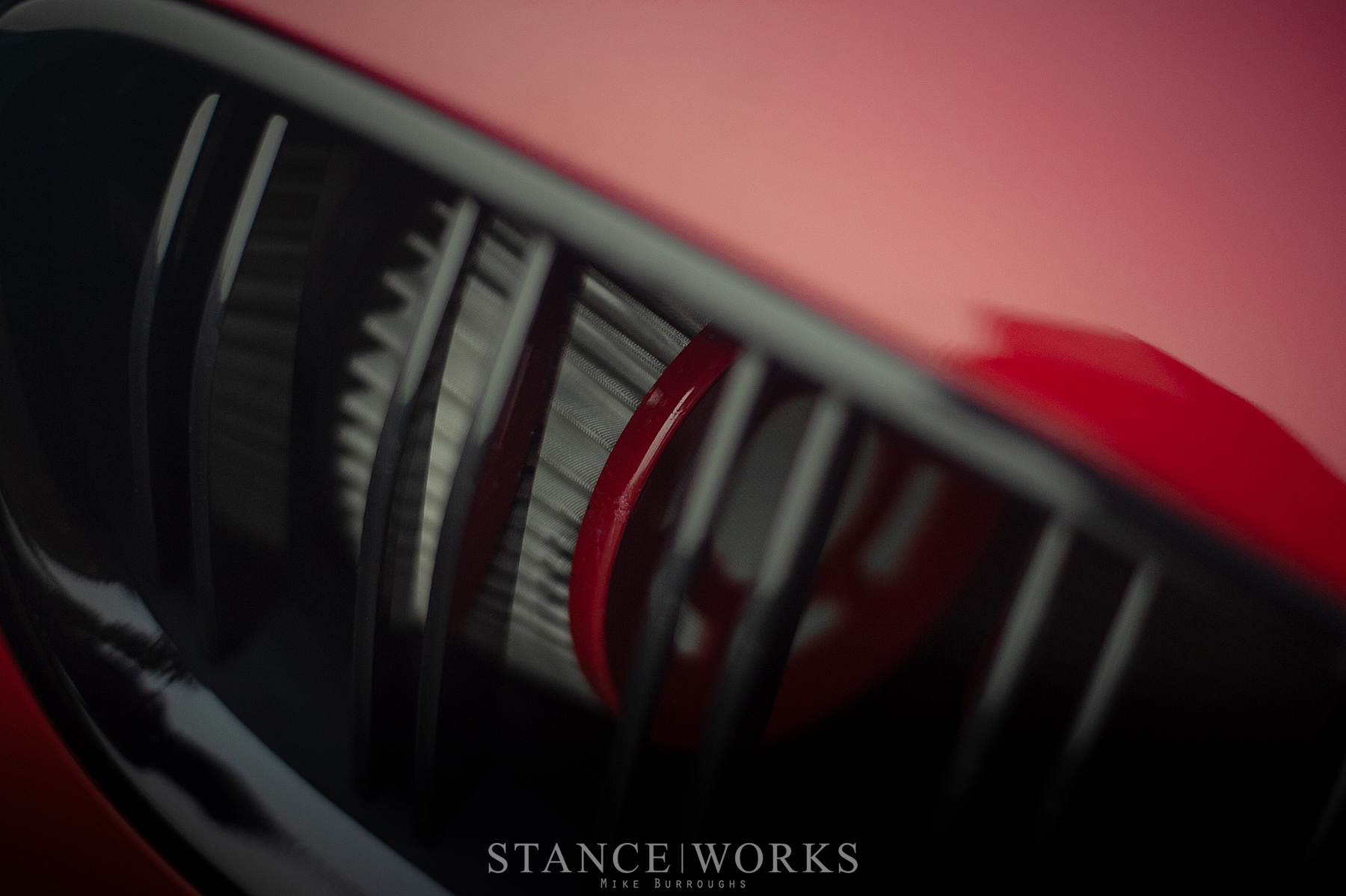 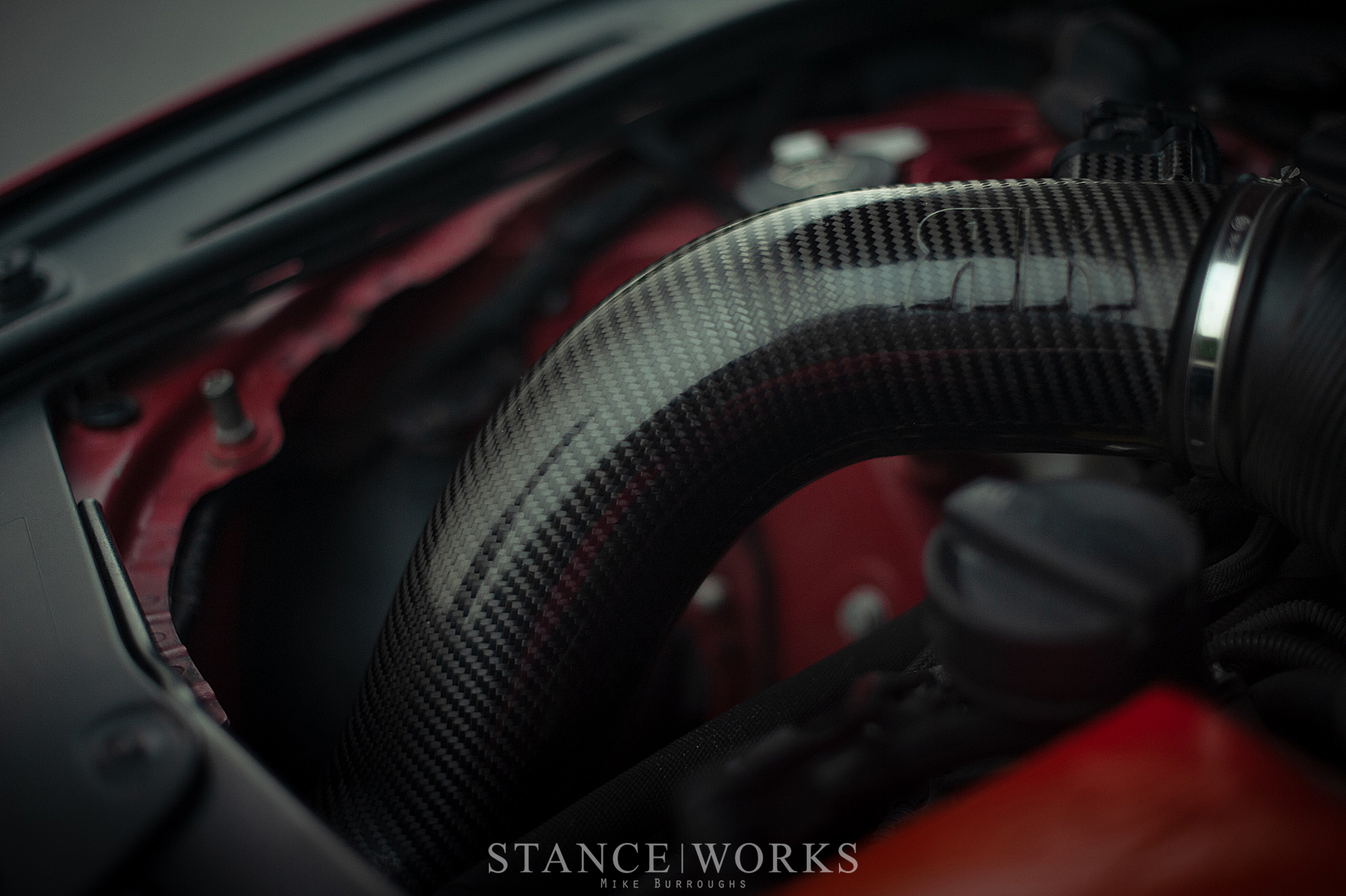 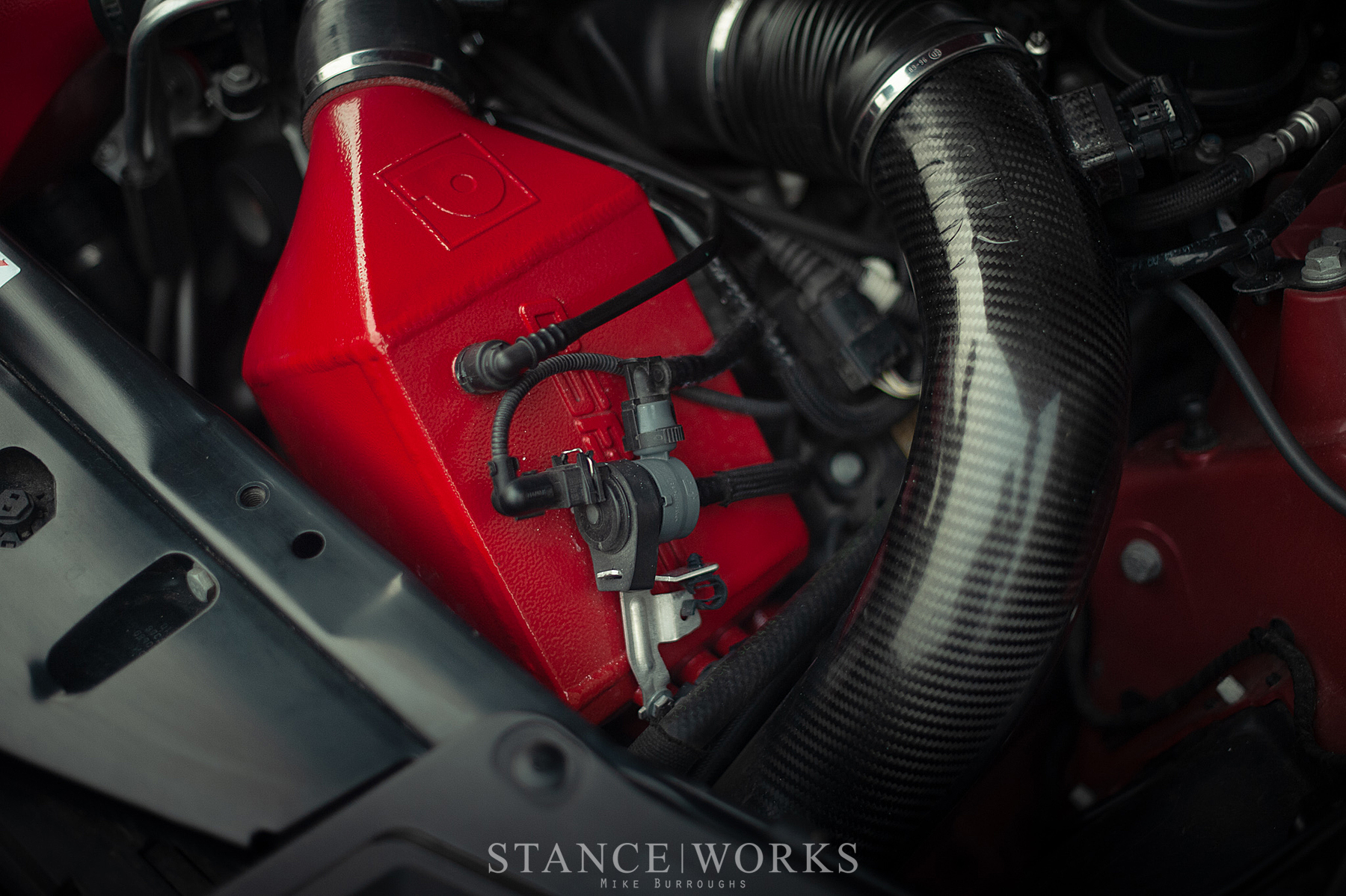 With so much bite, some bark was important too. Imola Red on its own wasn't quite enough, leading Ravi to take his Competition Package and Executive Package-equipped sedan to the next level, inspired by an OEM+ aesthetic that aims to embrace the idea of "tasteful" without venturing towards "over the top." The foundation for the look of the car is provided by a PSM Dynamic full-carbon aero kit, which has been paired with an Agency Power carbon fiber vented hood and an IND gloss black-out kit for the car's chrome brightwork. Lurking down in the corners of the bumper, hints of the Radenso Radar 360º RCM radar detector and laser jammer system appear, giving some insight into just how fast the sports sedan must be. Ravi takes every precaution. 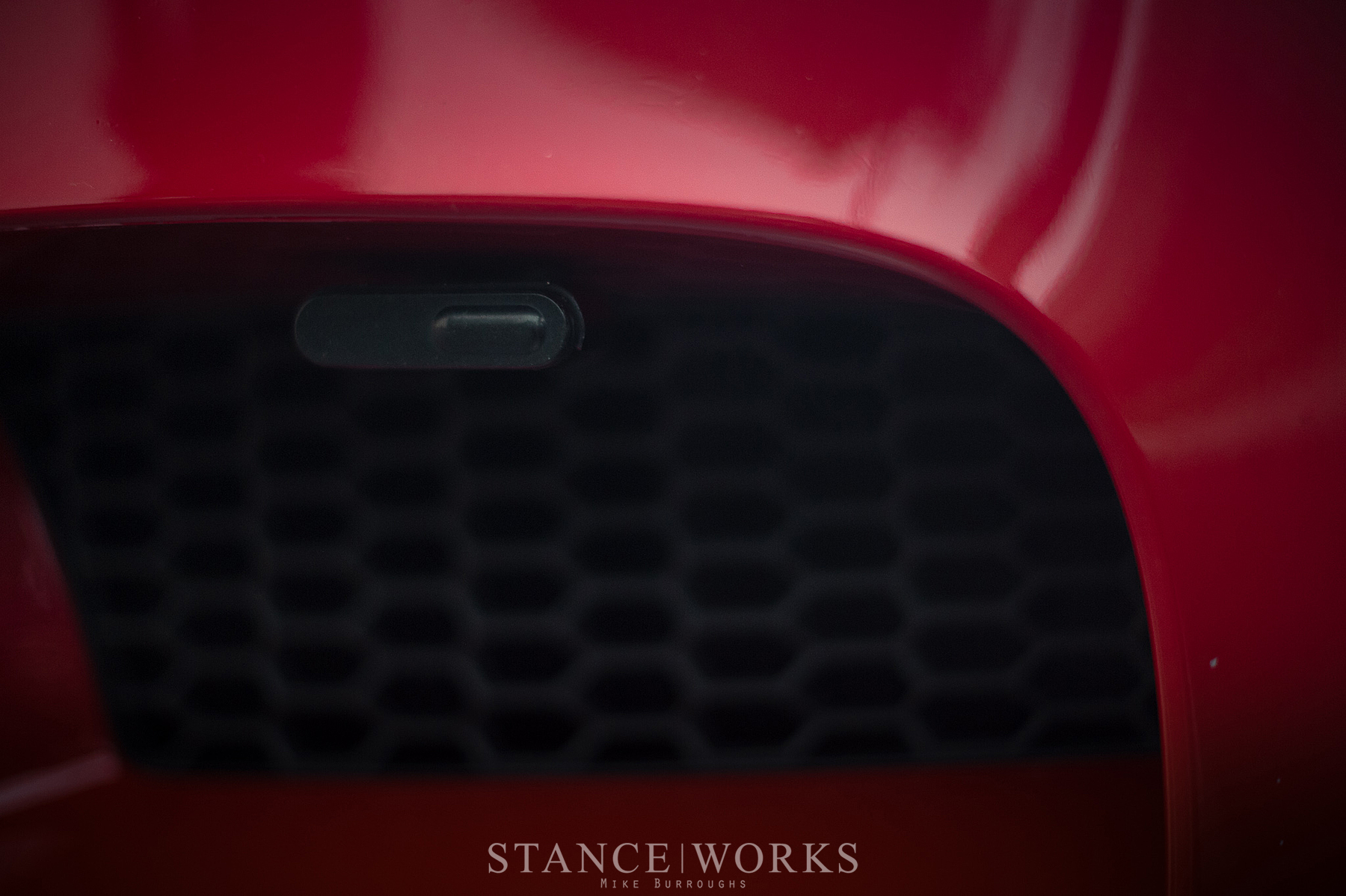 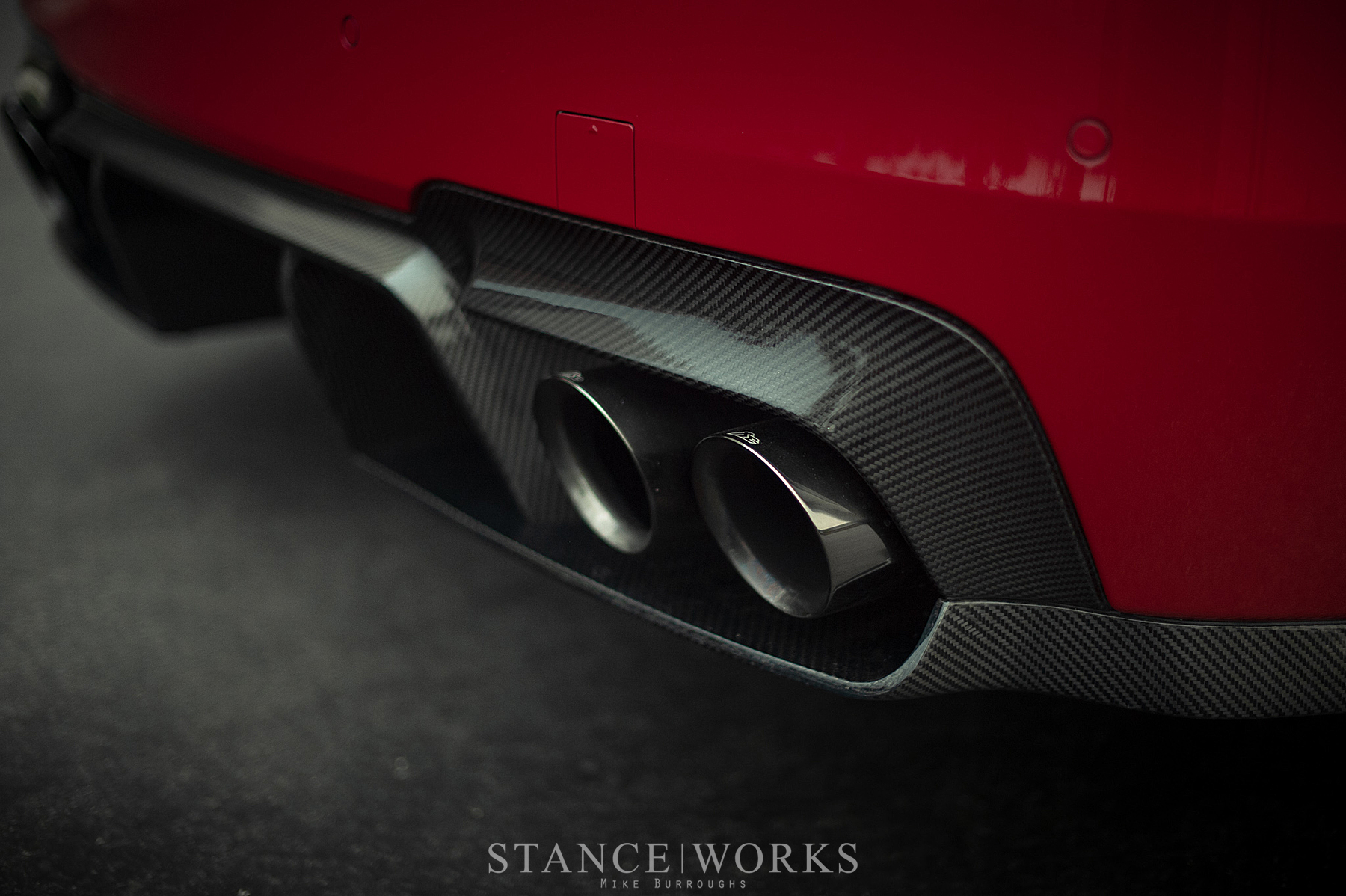 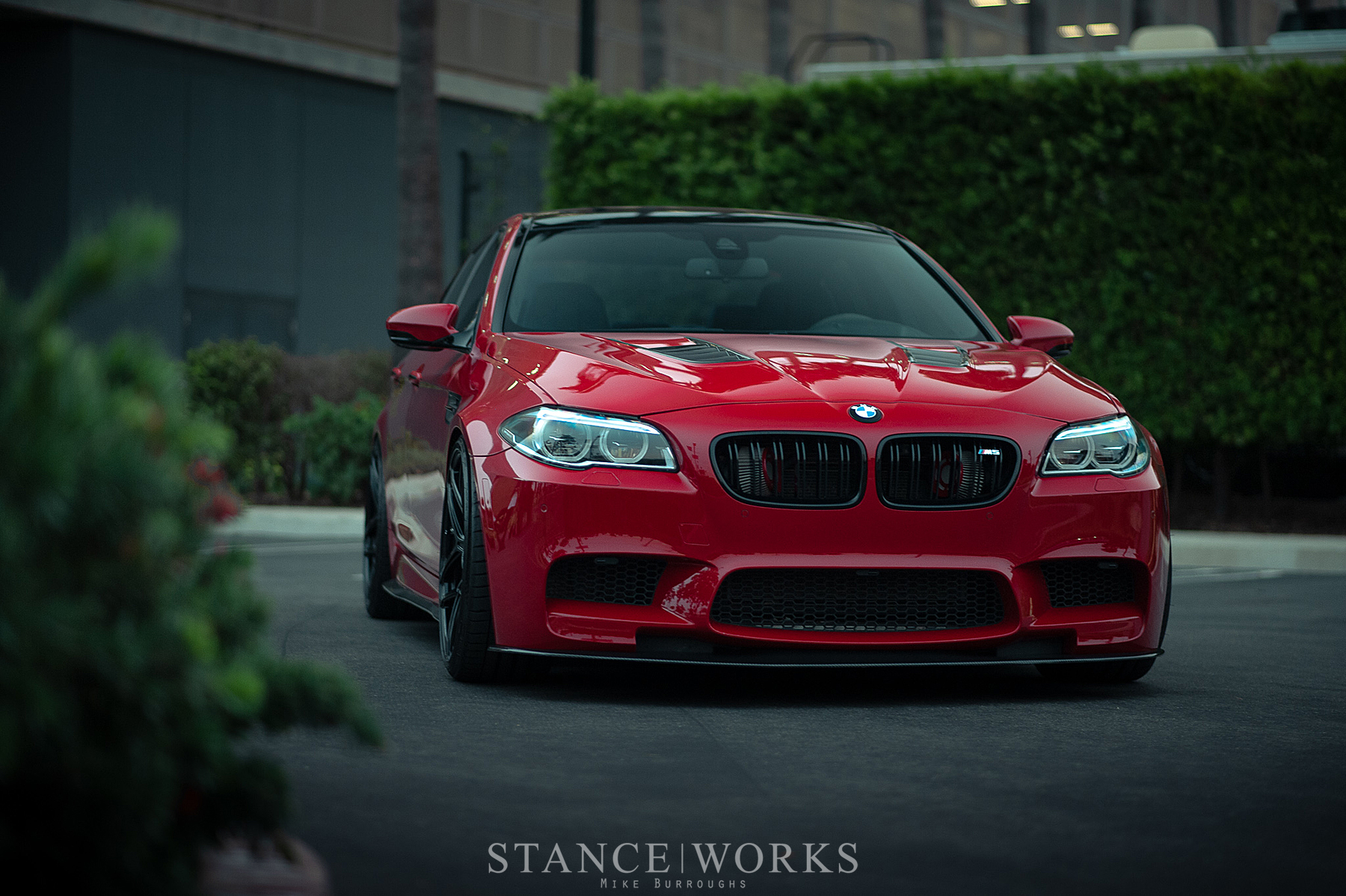 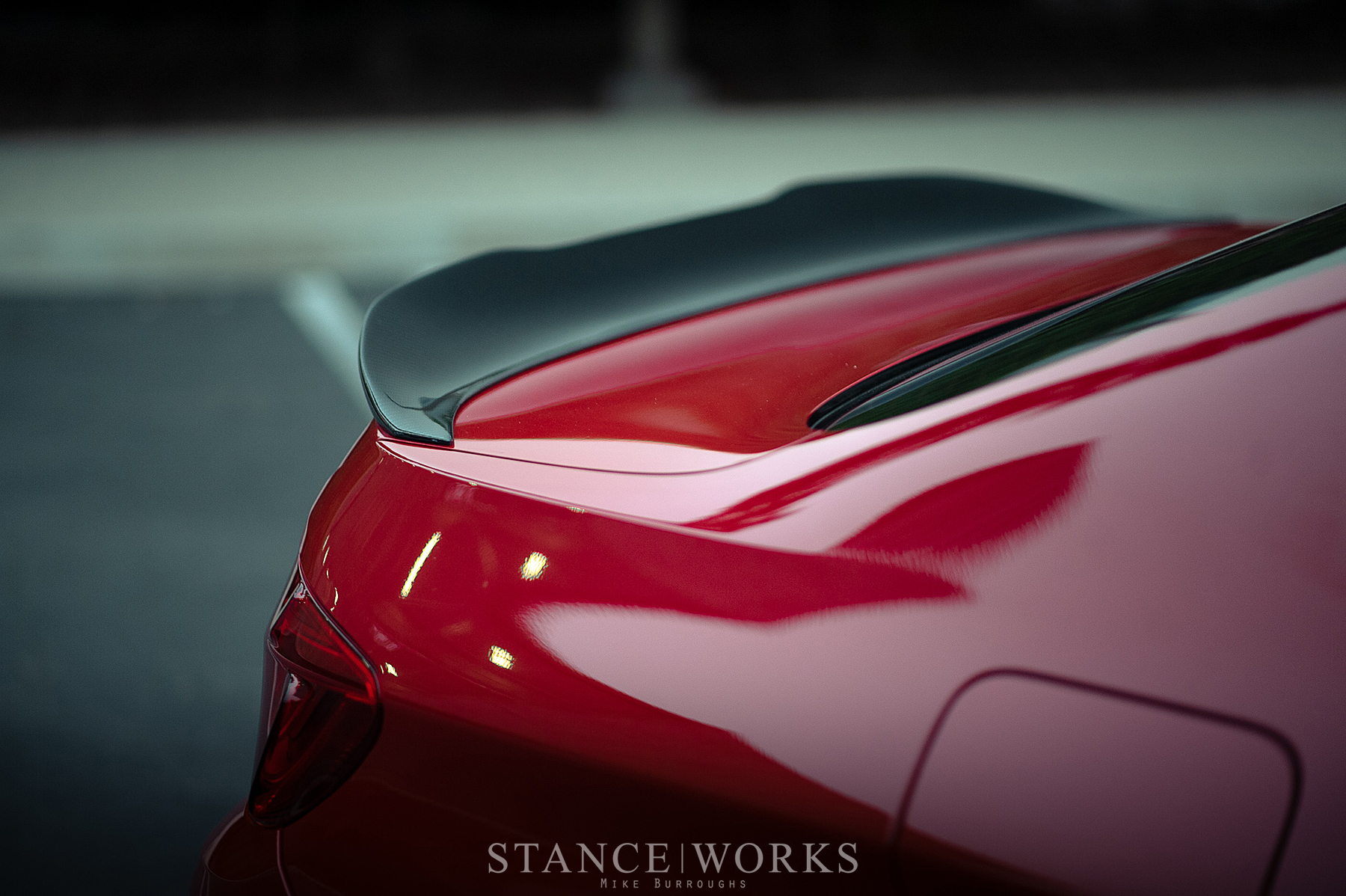 The inside of the car is optioned with factory black Marino leather, with an M Performance electrionic steering wheel, paired with 3D Design billet paddle shifters, standing as the centerpiece. The control unit for the radar and laser system sits to the wheel's right, while the rest of the interior retains the rule and order BMW deemed in Munich. 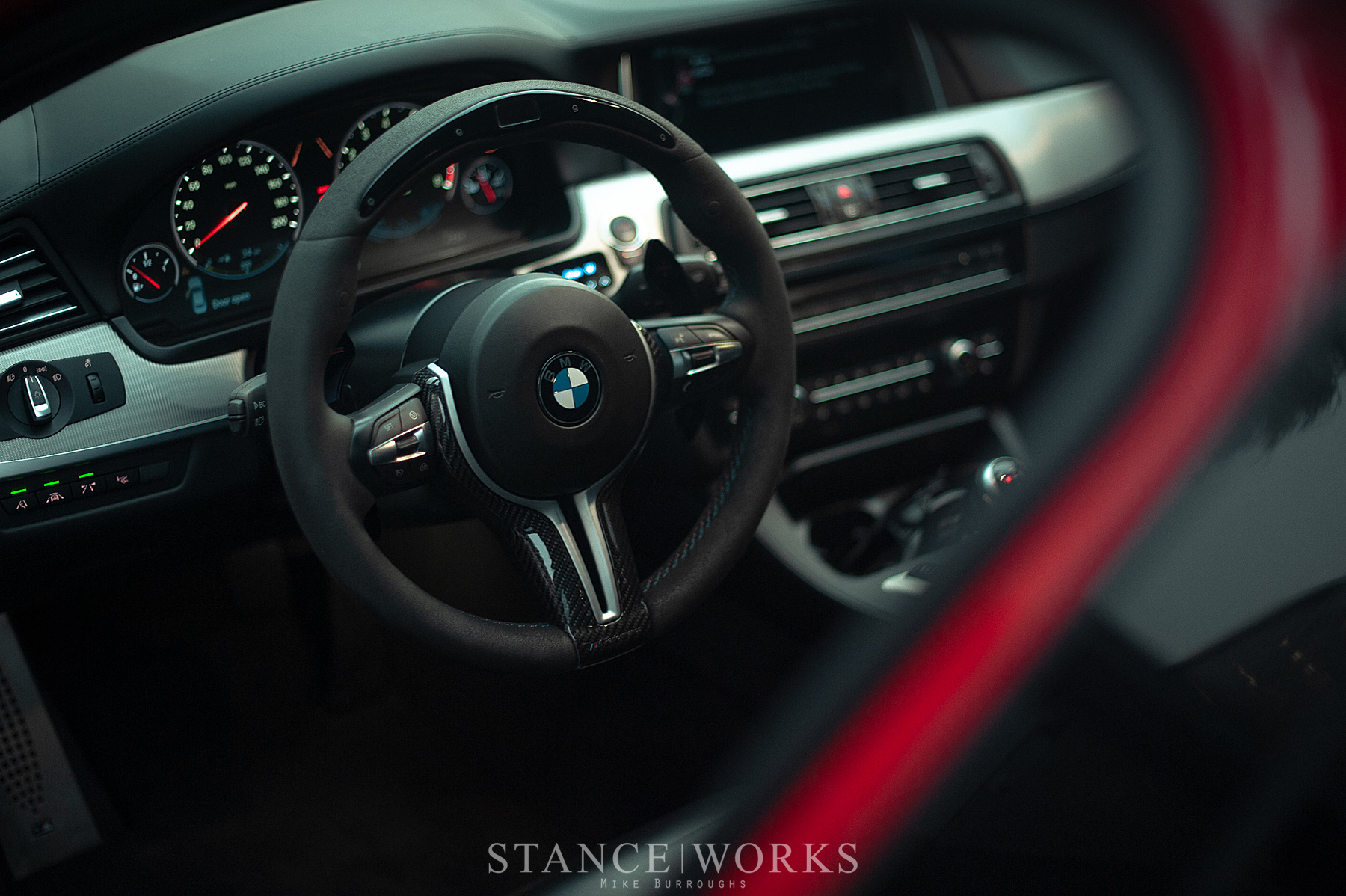 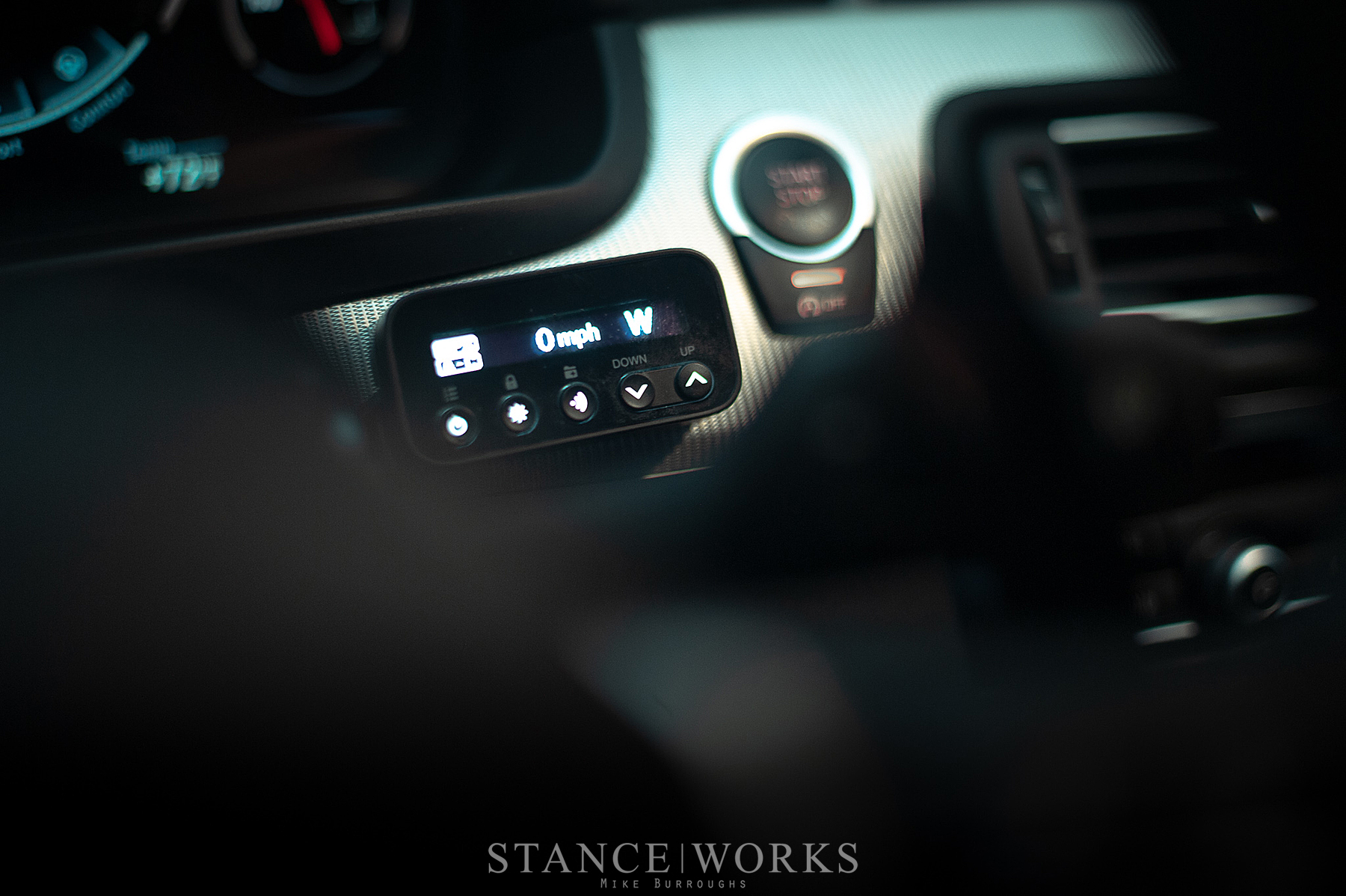 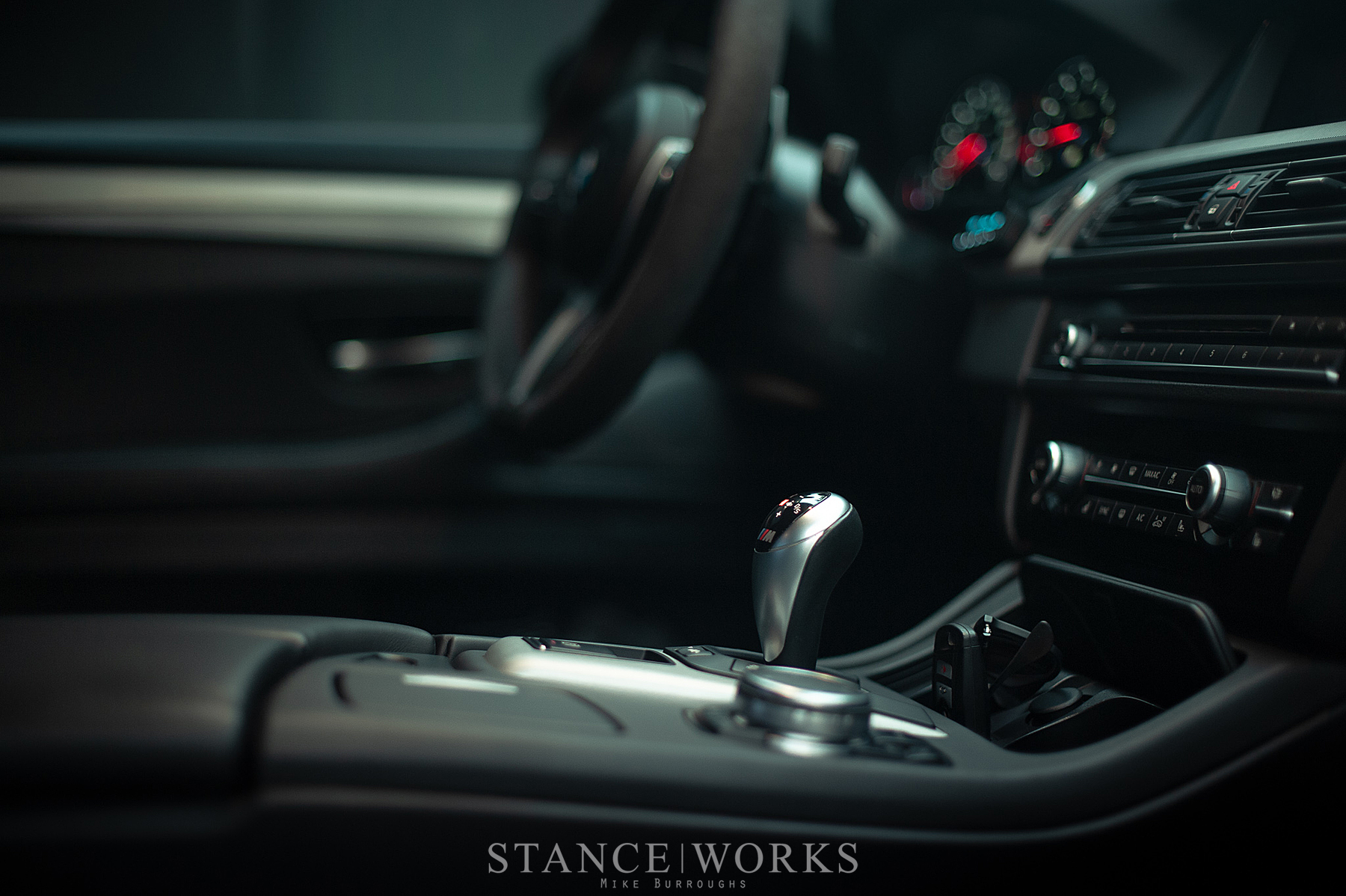 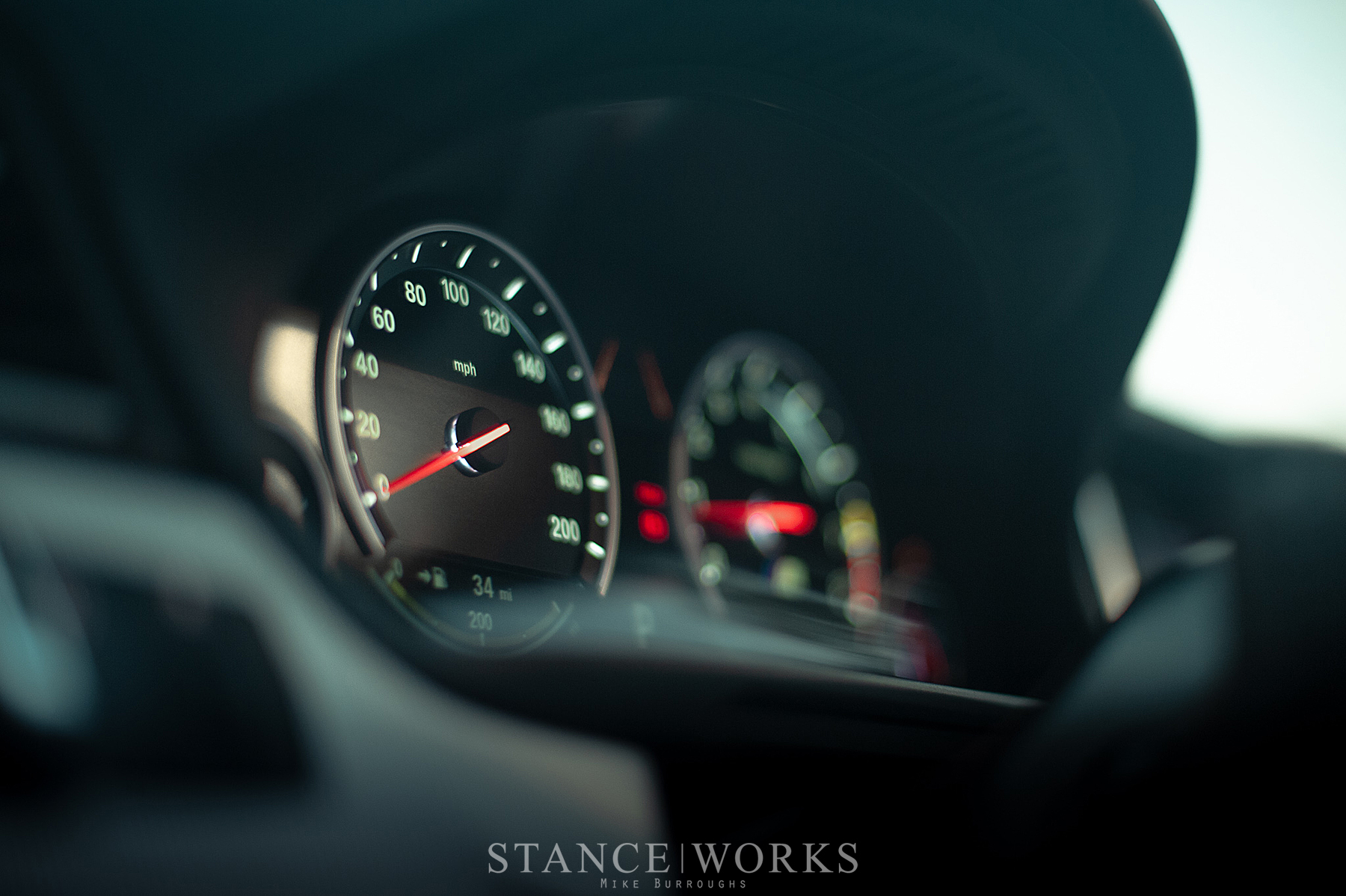 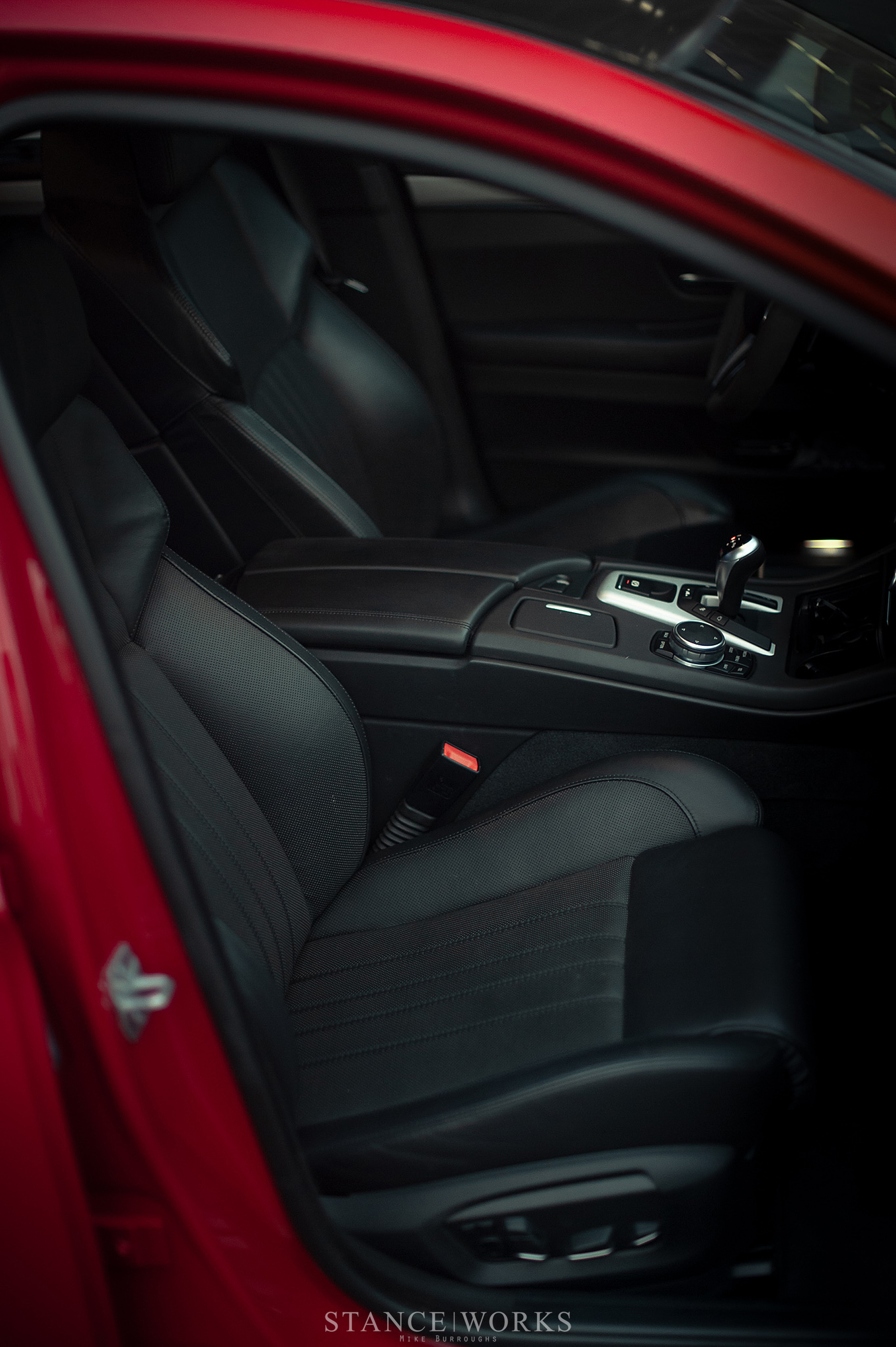 Last but not least, of course, is the running gear. While straight-line speed is of considerable importance to Ravi, the dynamics of the car are too. Thanks to a KW Suspension HAS kit, he's been able to fine-tune the ride height and ride of the car without sacrificing the engineering BMW afforded the high-end saloon. 6Sixty Design Monoblock wheels, measuring out to 21x9.5 and 21x11, provide the largest change to the overall look of the car, while factory carbon-ceramic brakes lurk behind them. Project Kicks Iconix R40 open-end lugnuts offer a final finishing detail for the car, and as a whole, it's a package thats undeniably fit for the M. 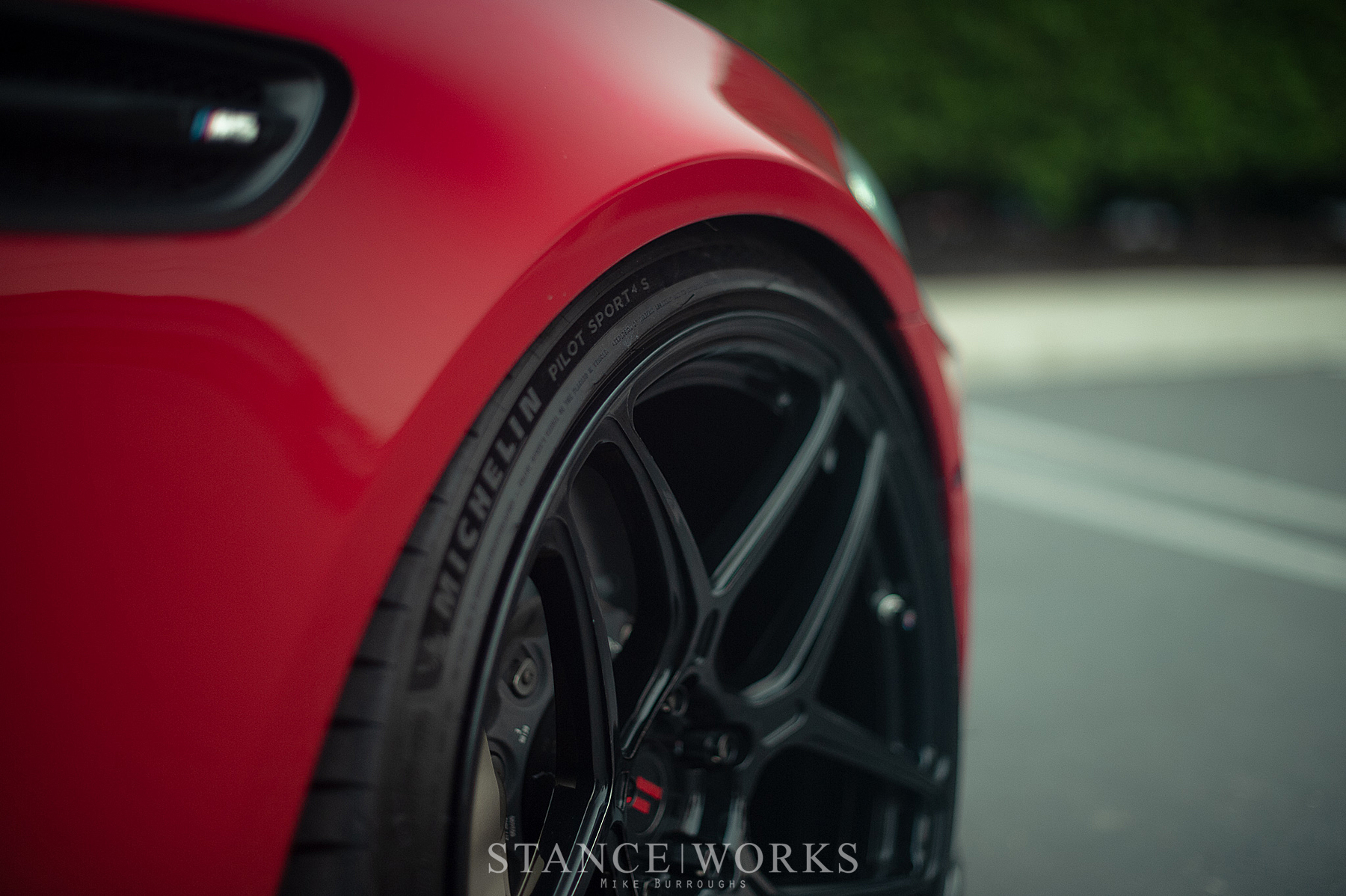 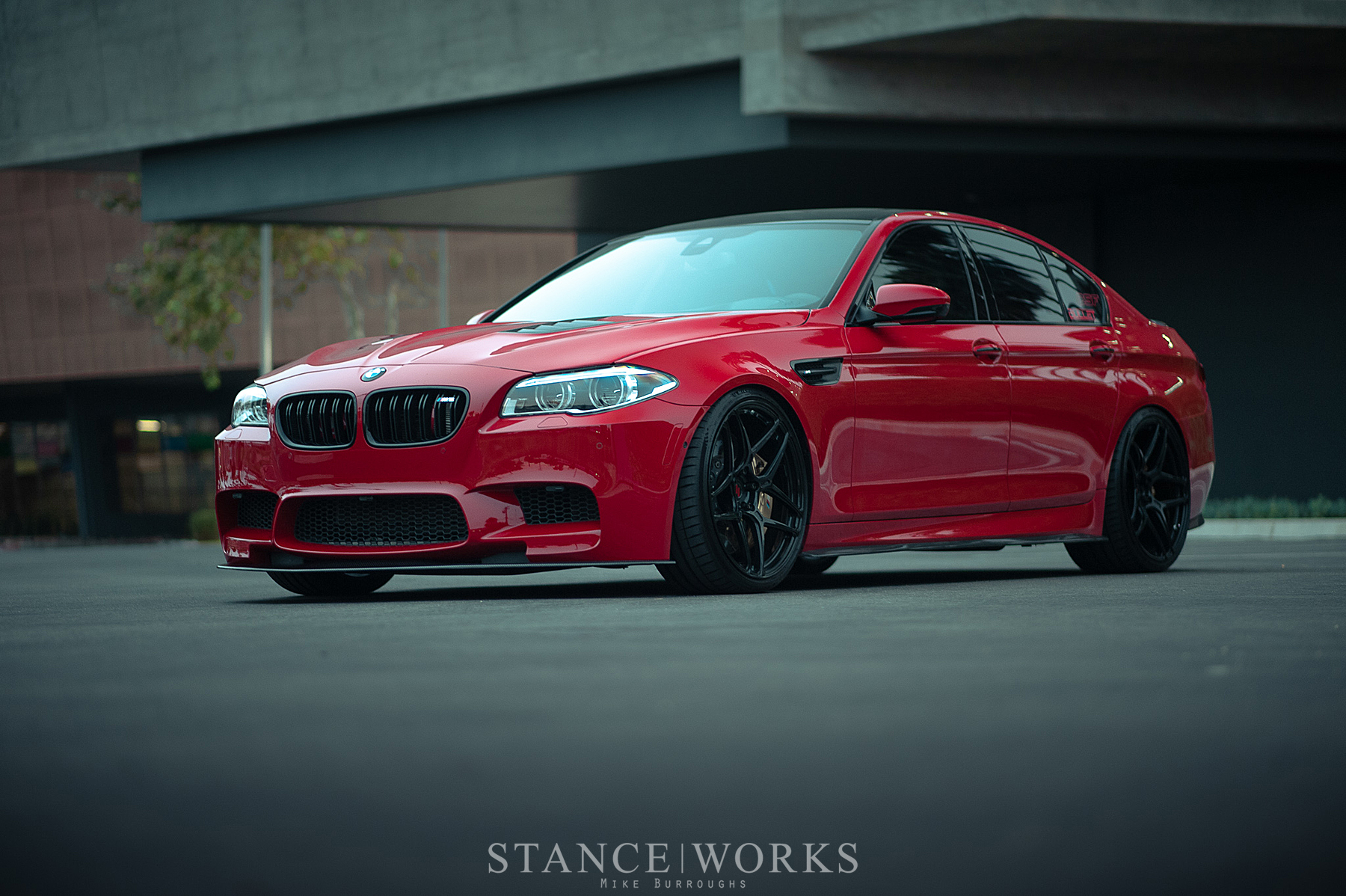 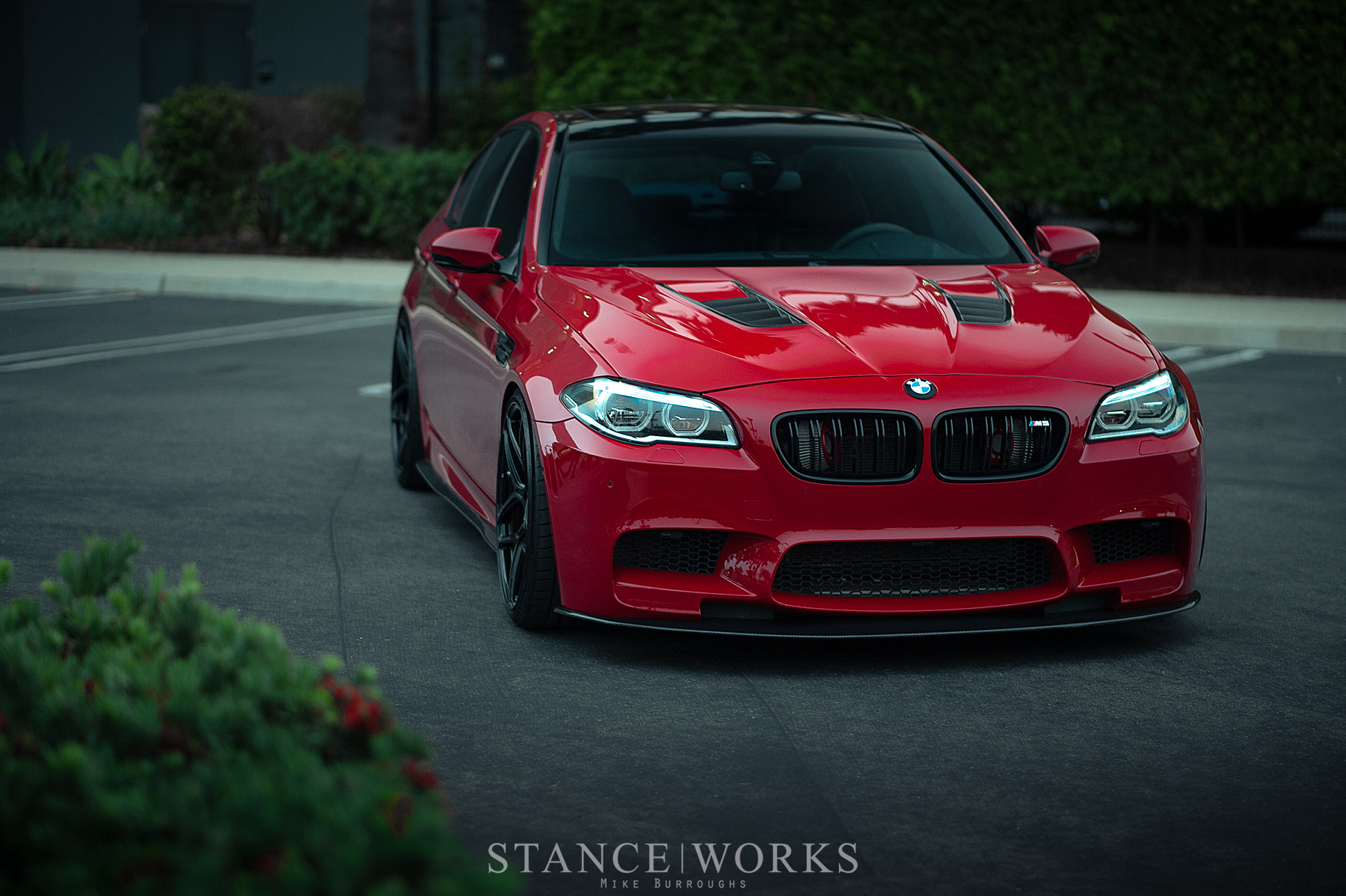 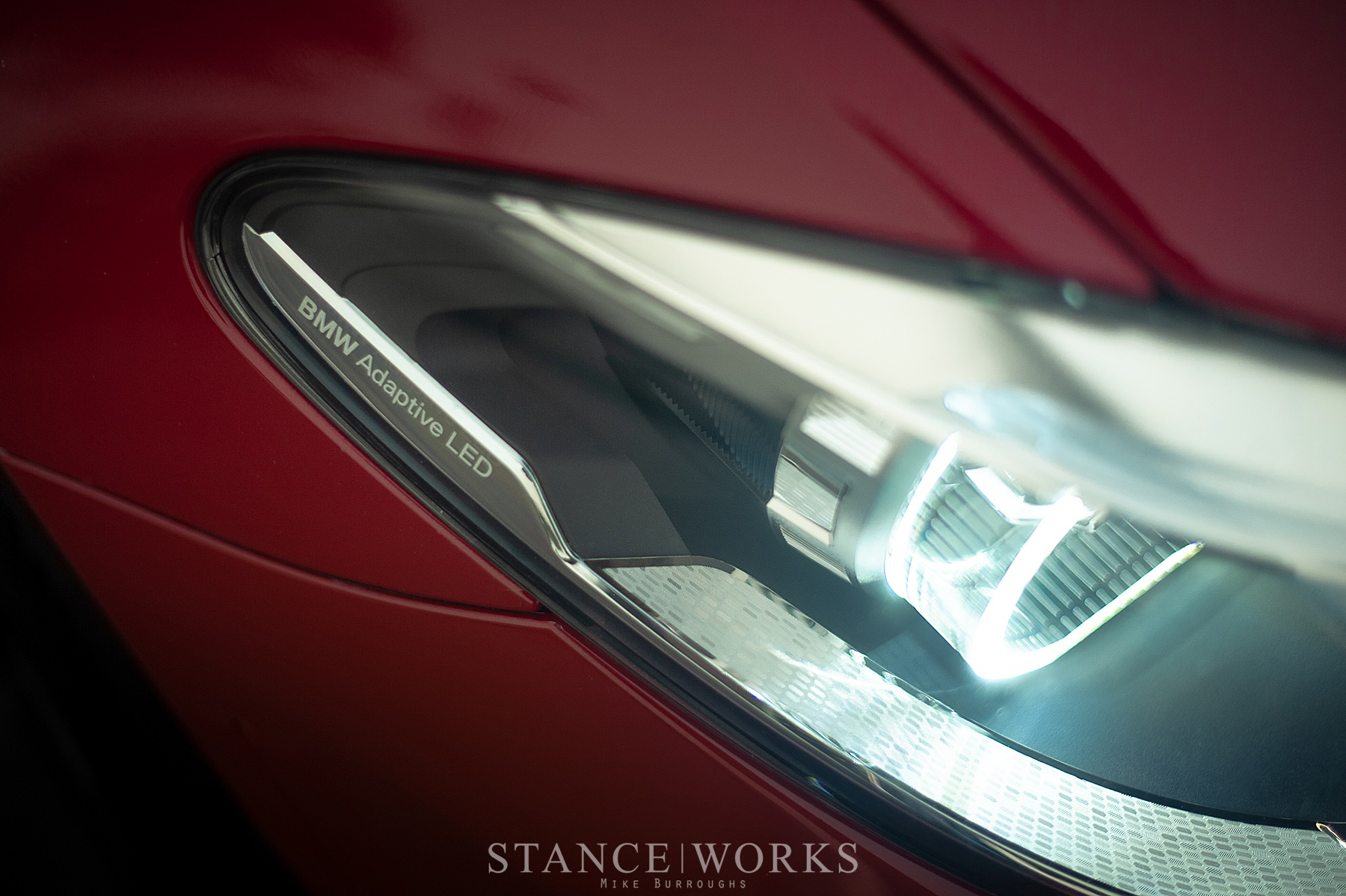 With hints of carbon peeking through the hood's Imola Red paint the M5 makes no attempt to hide what it truly is; instead, it wears its heart on its sleeve, straddling a line between performance and practicality that takes experience to find. Having built a name around high-horsepower, high-performance and 100%-streetable cars makes up a significant part of Ravi's build resumé. Thus, unsurprisingly, he's turned out a car that is executed to perfection, and defines what, likely, many of us could only hope for in a true driver's car. 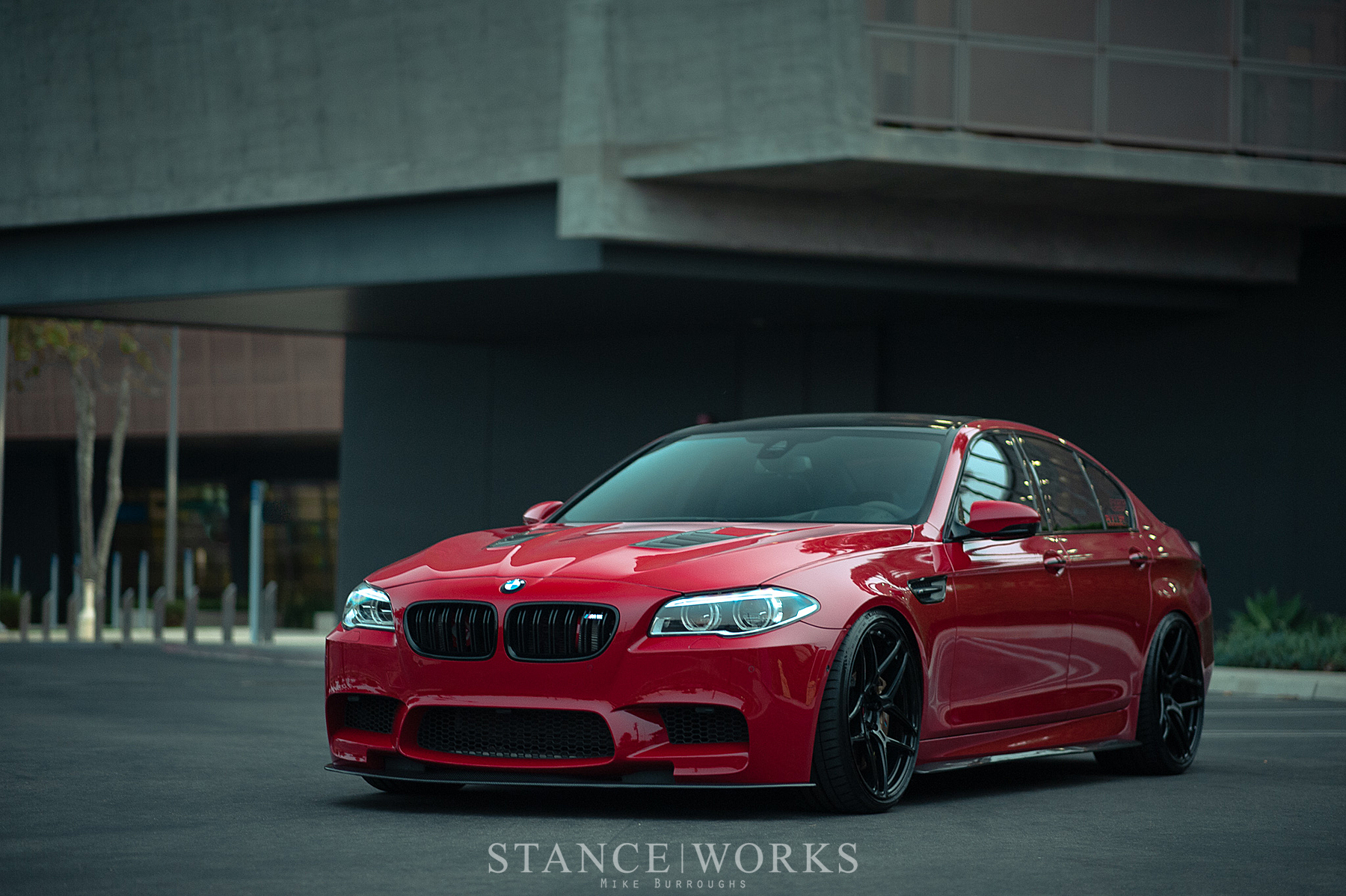 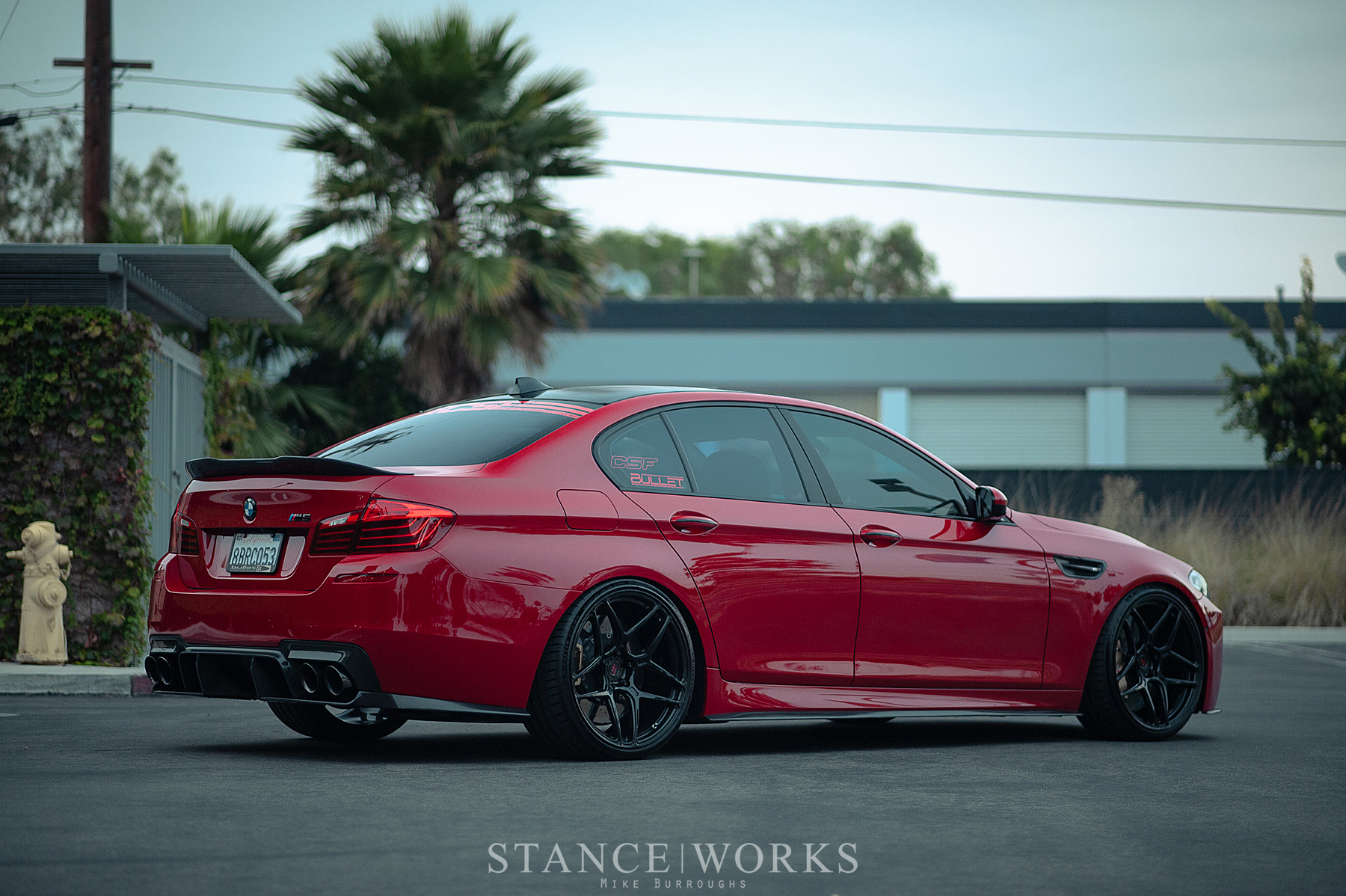 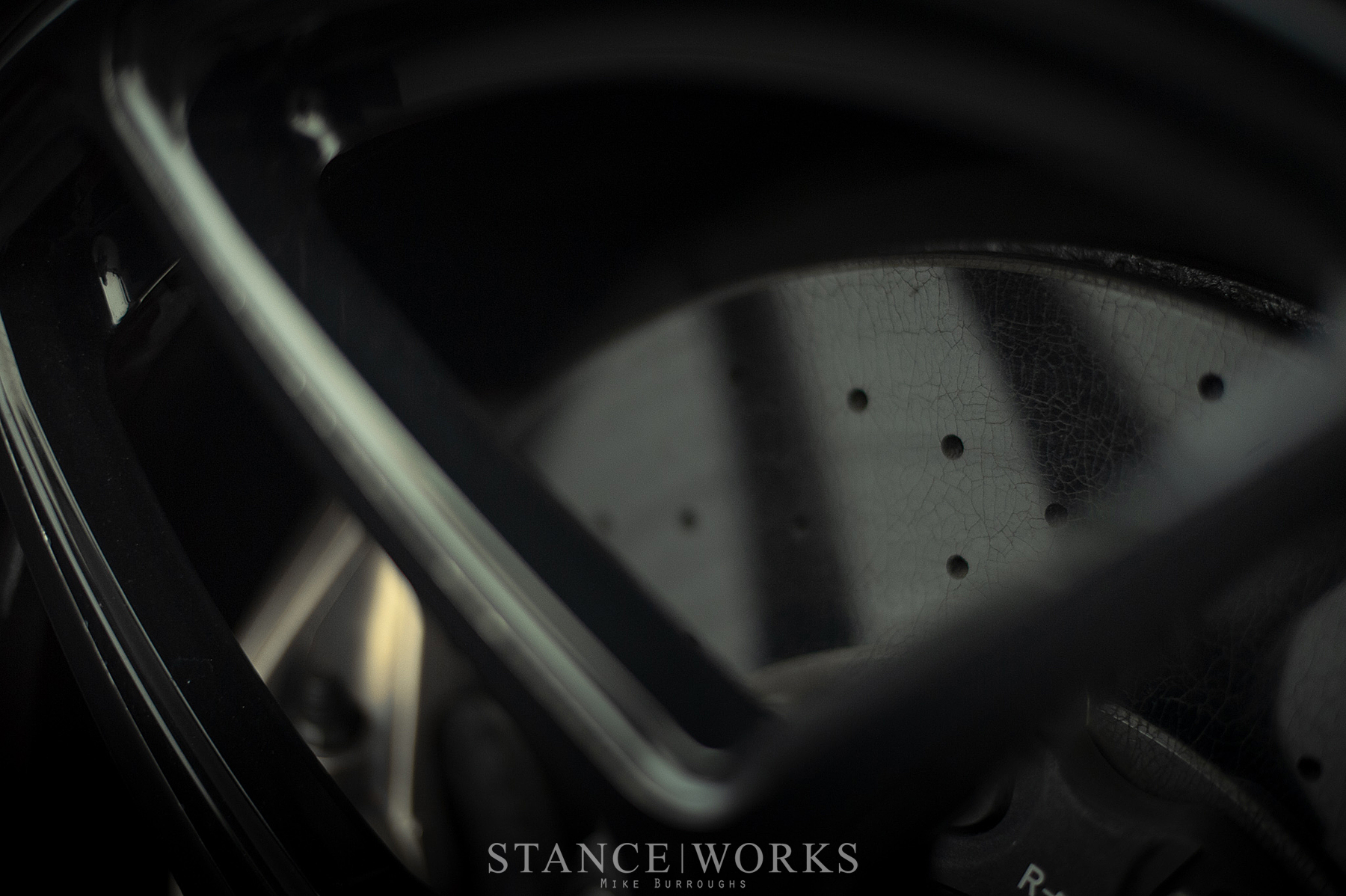 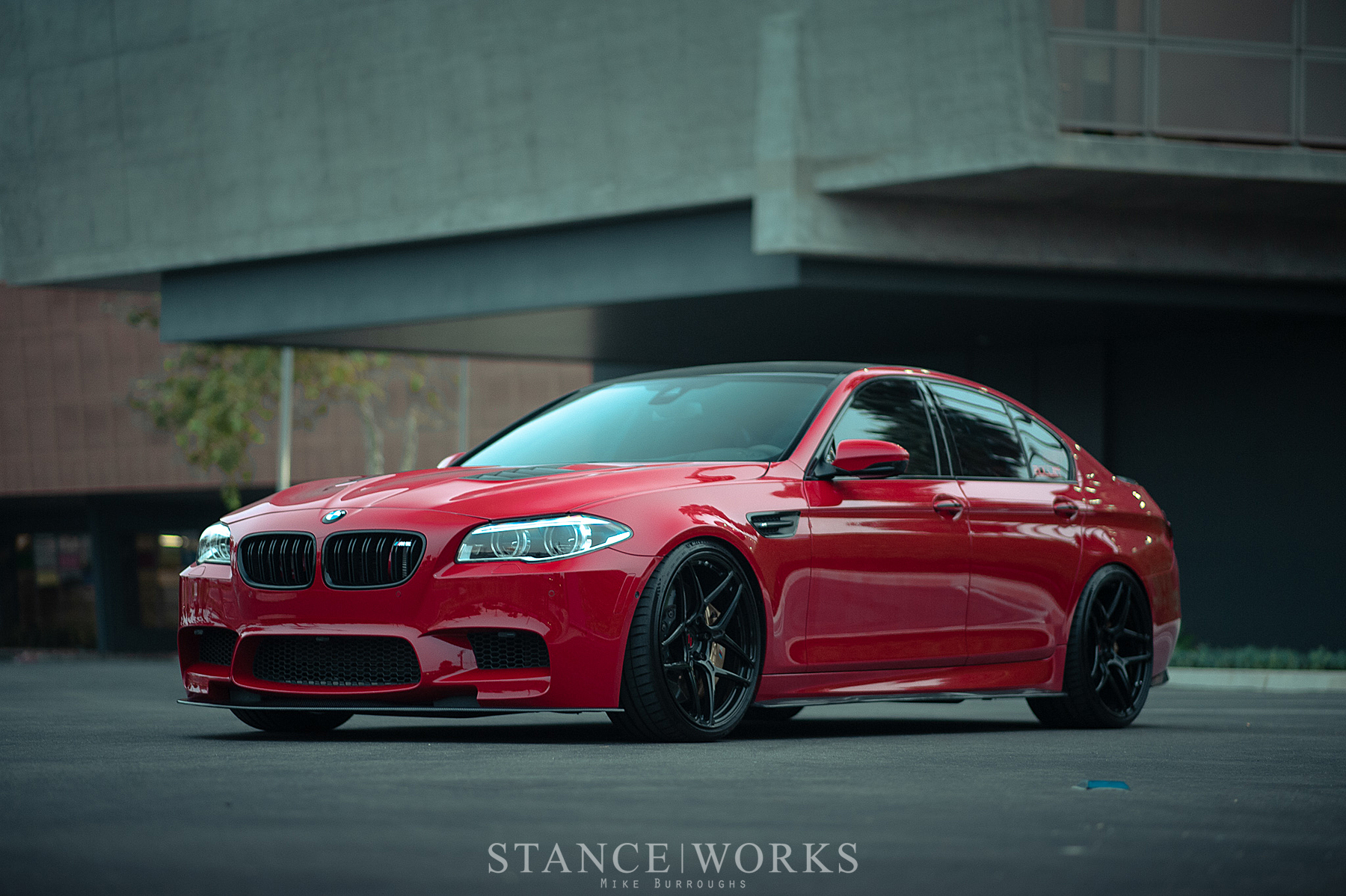