A monolith, set upon a backdrop that can only be found in the foothills of the San Joaquin: Justin Chenoweth's 4x4 E-150 is, at mini,um, an imposing force on the trail. It towers above seemingly every vehicle on the dirt at nearly 9 feet (3m) tall; its shadow stretching for miles at dusk. At its widest, the van spans just two inches shy of a Hummer H1, pushing tight trails and obtrusive brush to their limits thanks to its Super Duty running gear and 35" BFGs. However, its presence tells only half the story, for it is a gentle giant, built to bring camp anywhere, any time. If you ask Justin himself, he'll admit it's as close to ideal as he could muster, a concept years in the making. 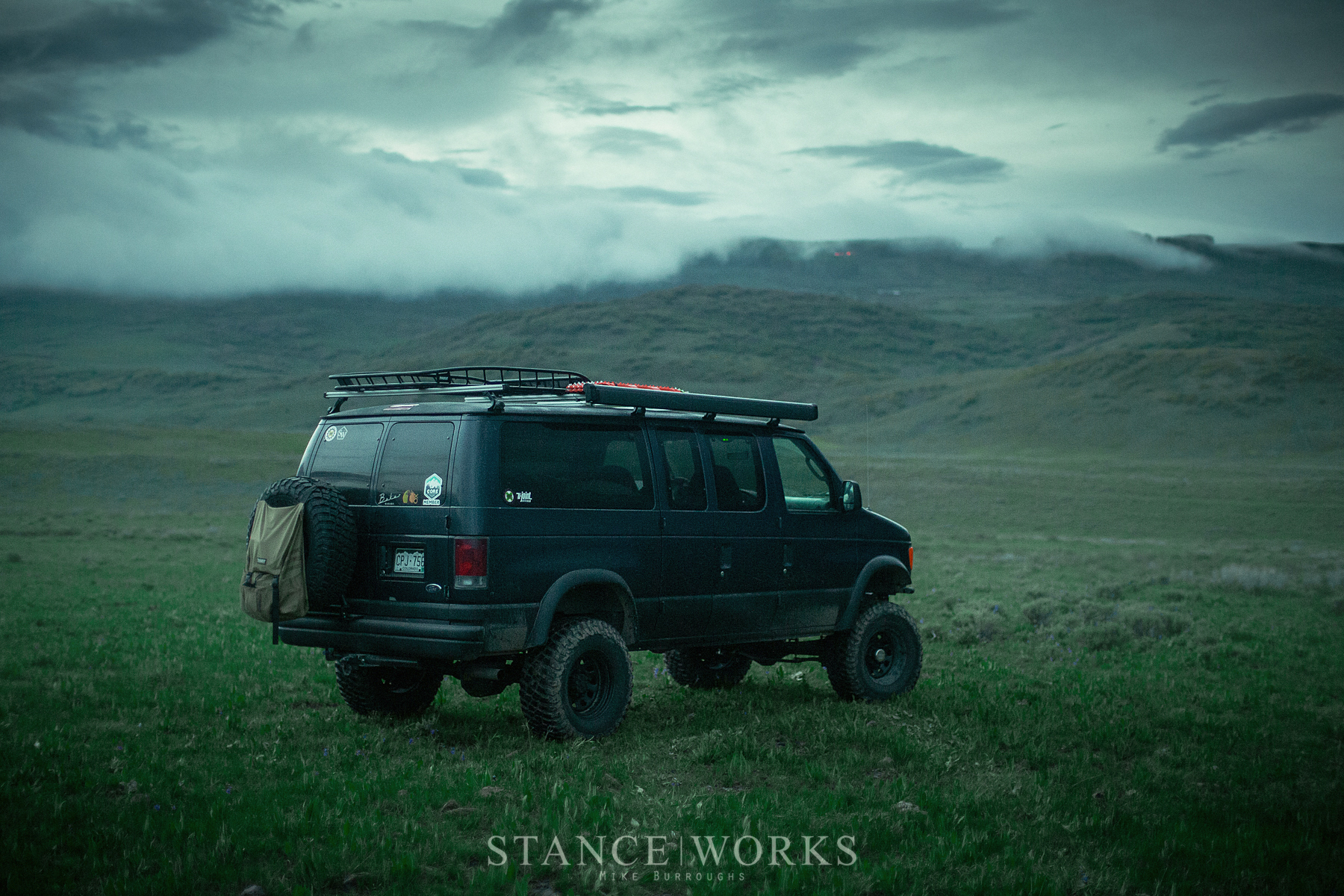 For most of the StanceWorks Off Road family, our first opportunity to see the benevolent behemoth was at the start of 2019's annual trek. As always, Justin led the pack to camp where we sat waiting with anticipation. In near silence, the van's 5.4-liter V8 powered it up the hillside and into camp, shrouded entirely by the clack and clatter of the diesel Land Cruisers that followed. It's tough to imagine, then, a Ford E-series Chateau van stealing the spotlight from imported Japanese 60- and 80-series trucks, but for the night and the following morning, the van was unquestionably the star of the show. 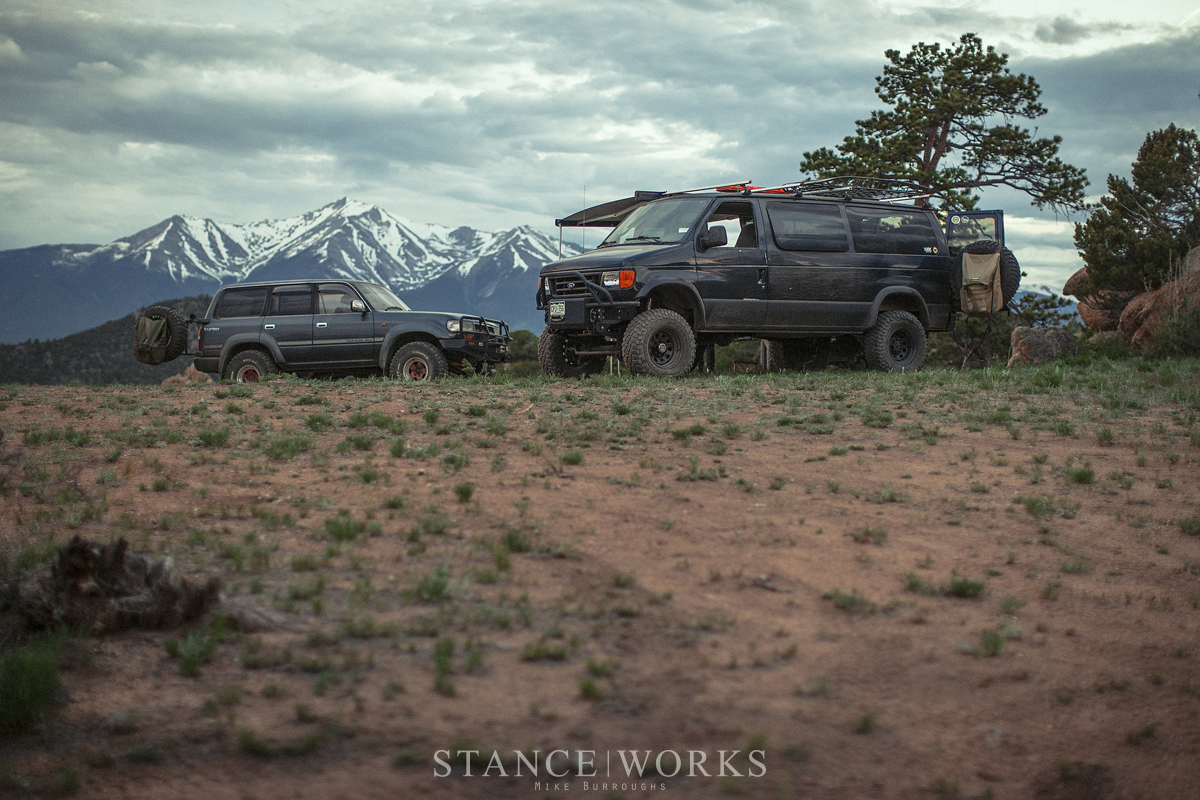 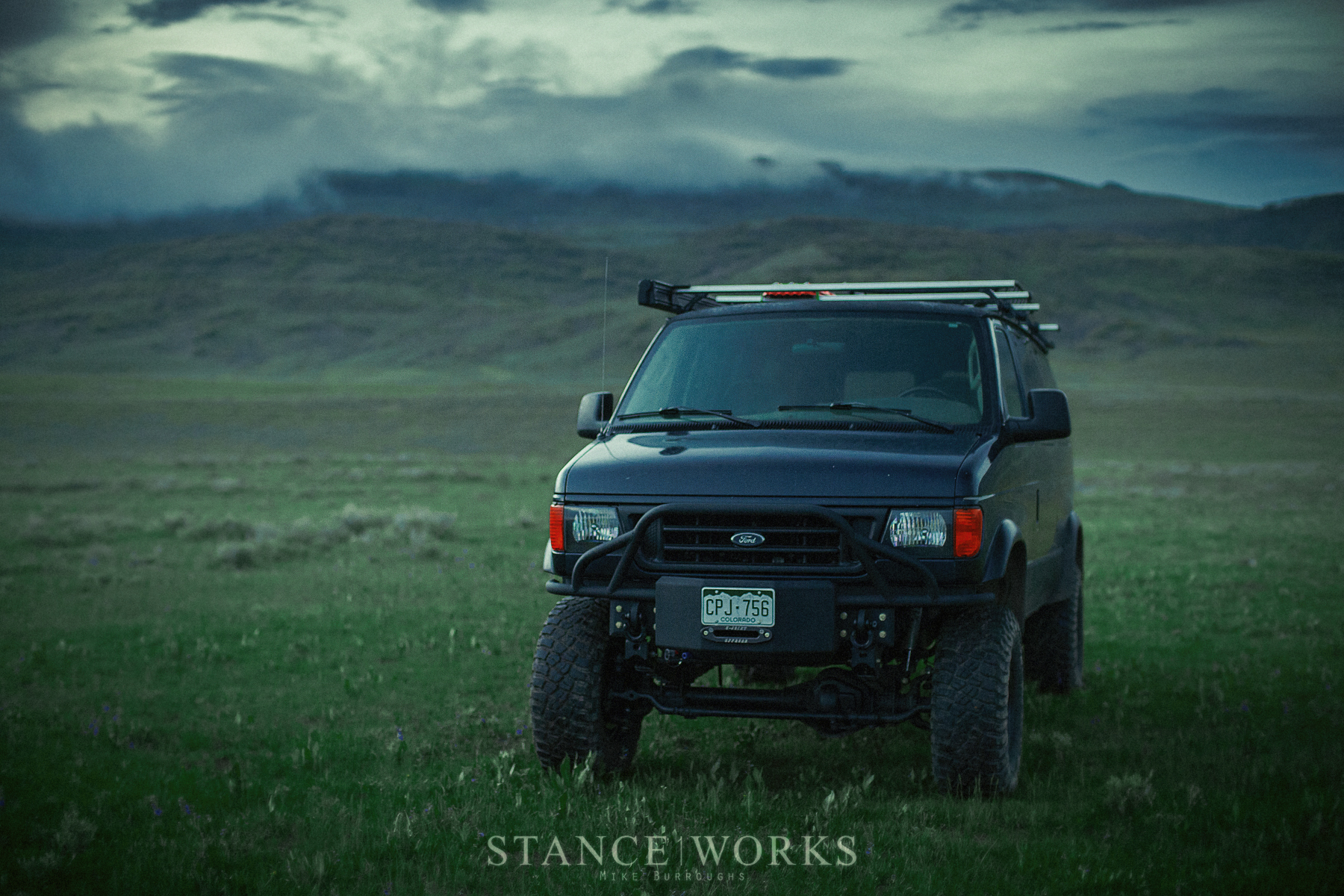 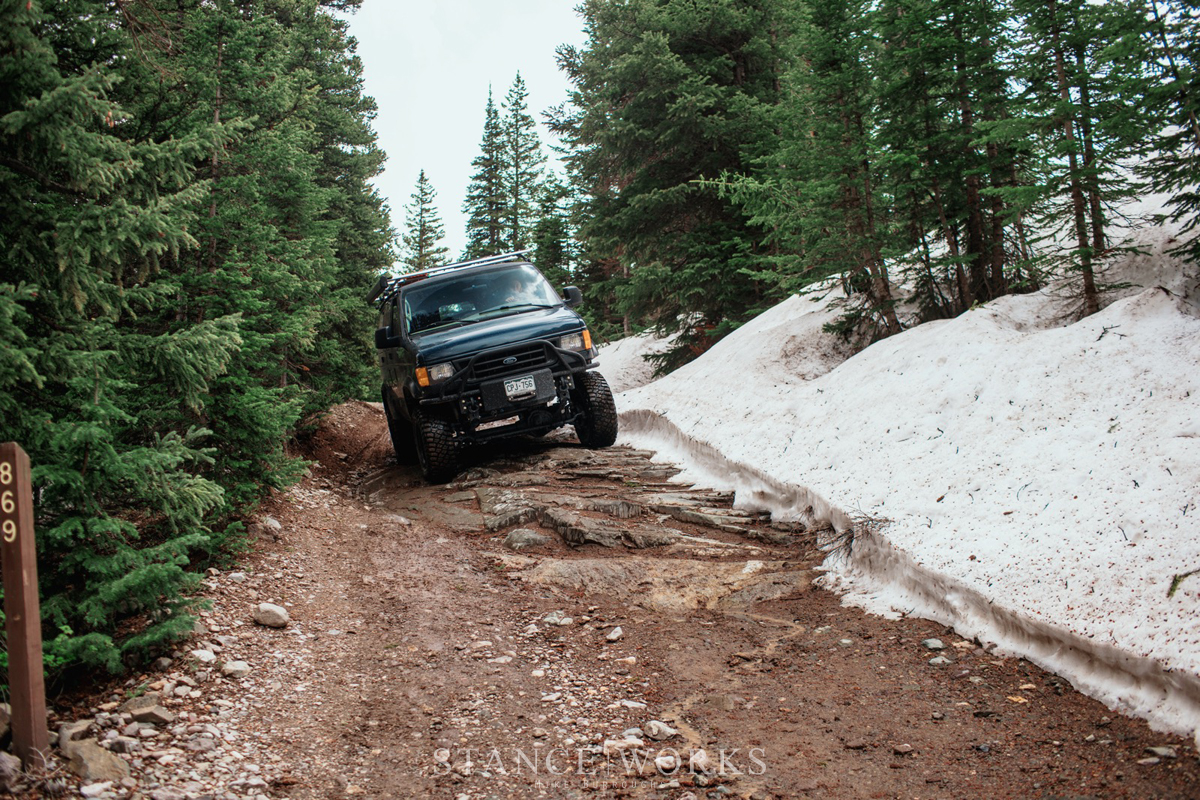 The van follows in the footsteps of Justin's former off road build, a third-generation Ford Ranger topped by a James Baroud tent and a buildout in the bed. While it met most of the needs for him, his wife Rose, and their dog Charlie, it left a lot to be desired; a list of drawbacks Justin became more than intimate with over the years spent pushing the small pickup to its limits. For quite some time, Justin hemmed and hawed over diving into a van build, knowing that, while it would meet both his needs and his expectations, getting there would be no easy task. At the start of 2019, though, Justin bit the bullet and bought a 2003 E-150 that was, to put it nicely, in need of some serious work. 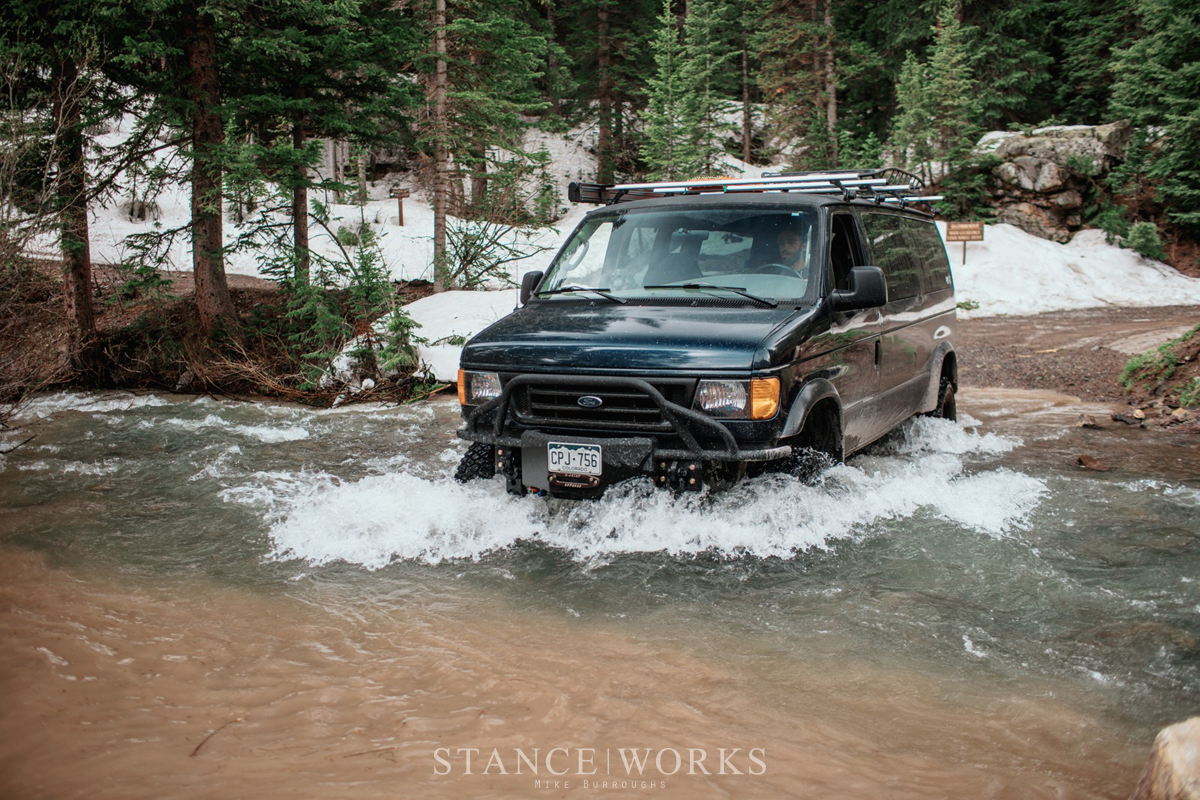 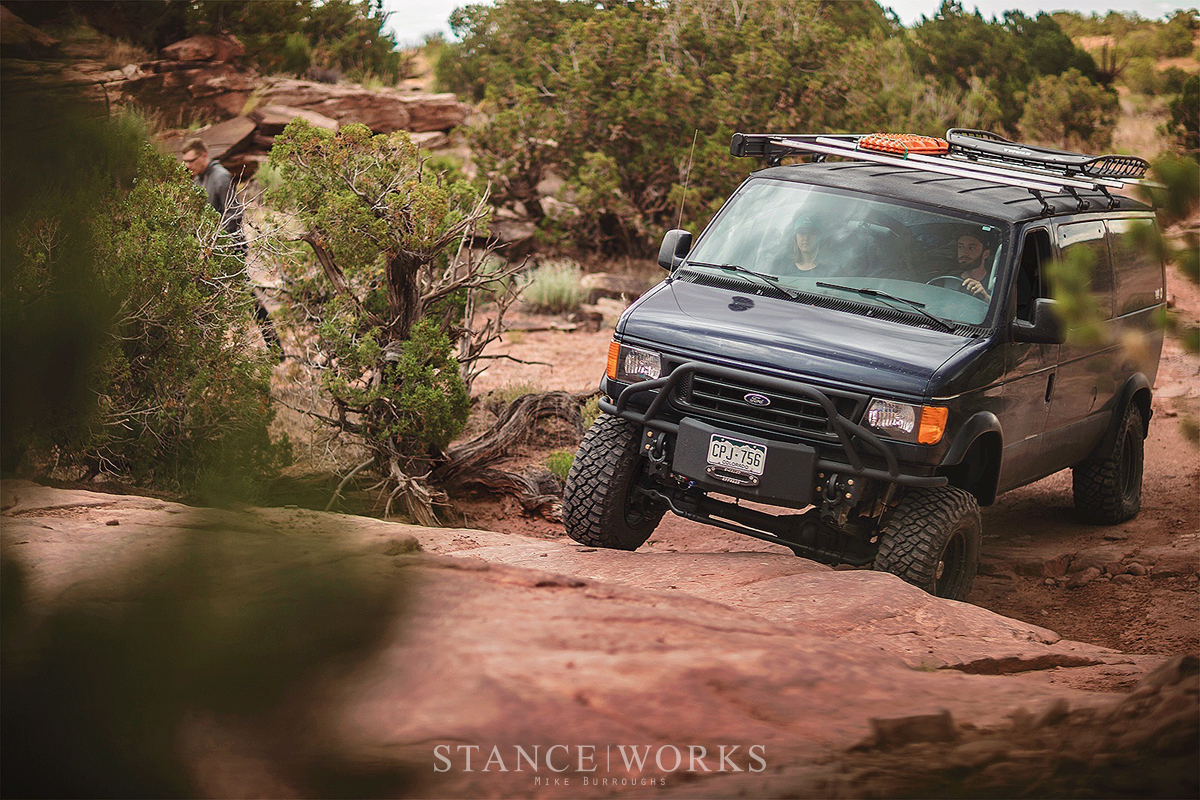 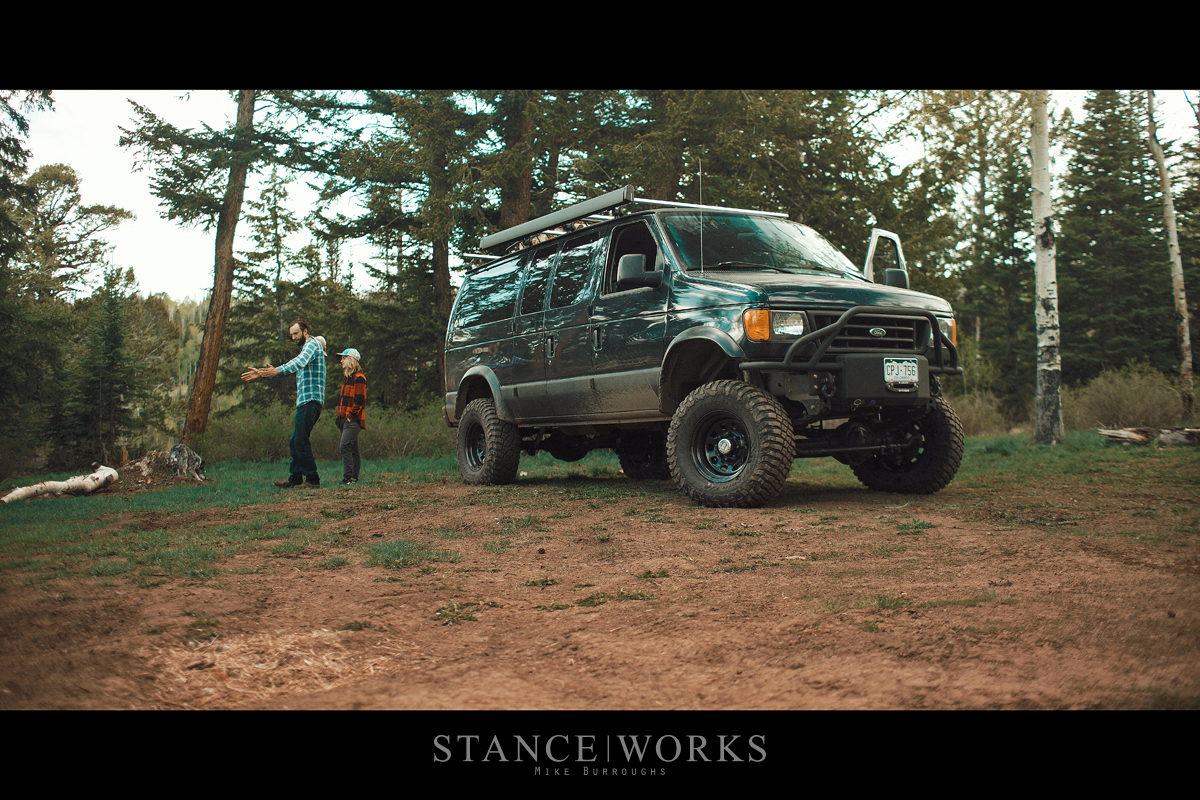 The E-series vans of the era were only offered in two-wheel-drive variants from Ford directly. Other coachbuilding houses, such as Sportsmobile, have built a name upon 4x4 conversions, but most come at a price premium. As an owner and operator of Baker Garage in Denver, Colorado, Justin is more than familiar with his way around a vehicle, and as a former Ford Master Tech, he knows a thing or two when it comes to blue ovals. Not one to be limited by a pre-built solution, Justin turned to UJoint Off Road, a North Carolina company that specializes in E-series 4x4 conversion kits, which allowed Justin the freedom to source the parts he felt best suited the build at hand. 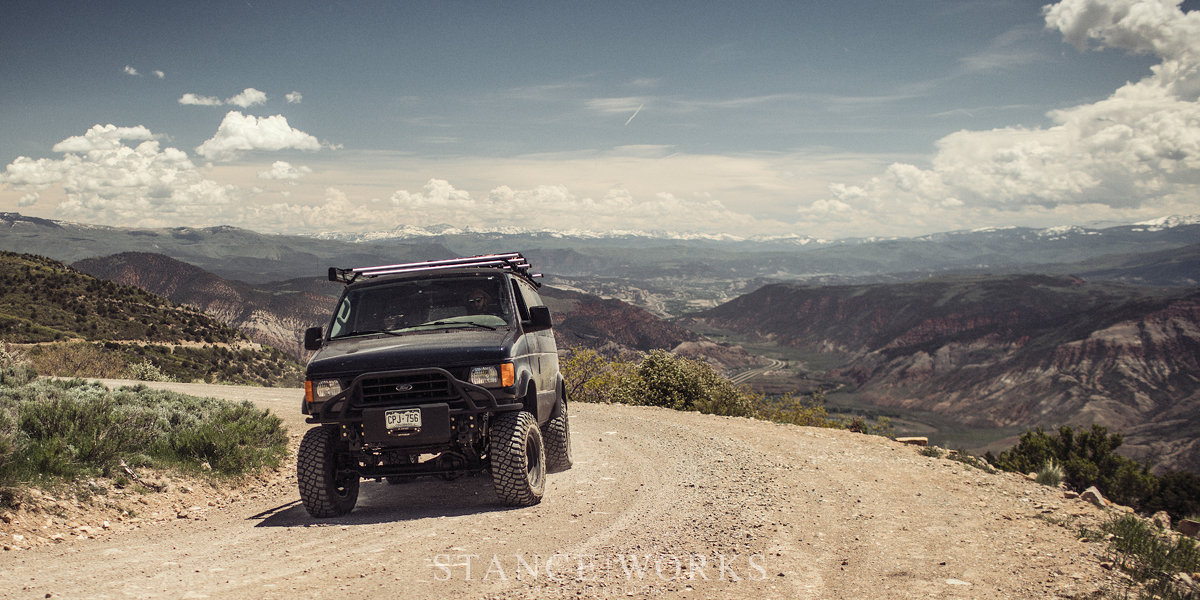 Underneath, the van is now akin to a 99-04 Super Duty Ford, from the axles and spring packs, to the mounts, shackles, and smaller odds and ends. Utilizing all Ford equipment means the van is still serviceable with factory parts, and allows for a massive list of aftermarket options that improve the capabilities of the big blue beast, such as the Ox cable locker at the tail end of the wagon. The conversion also provides a significant lift to the truck, which allows it to clear its 35s (and now 37s) with ease. 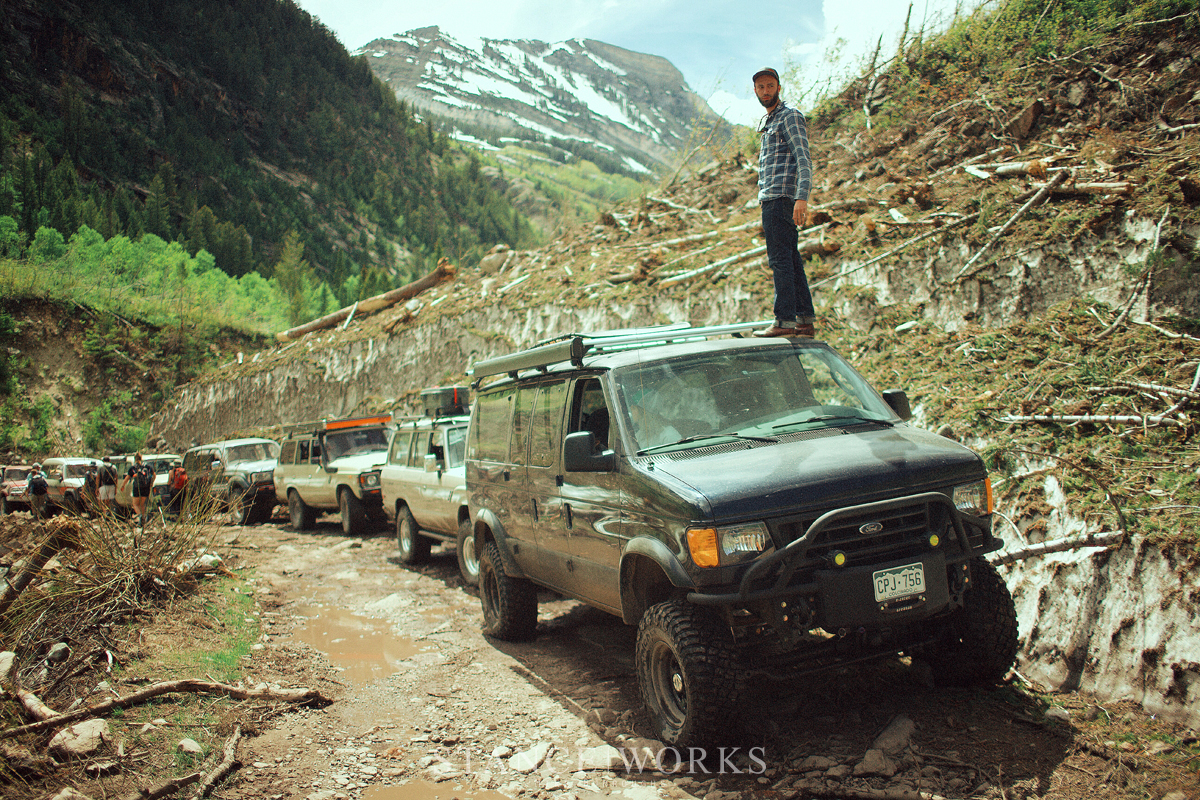 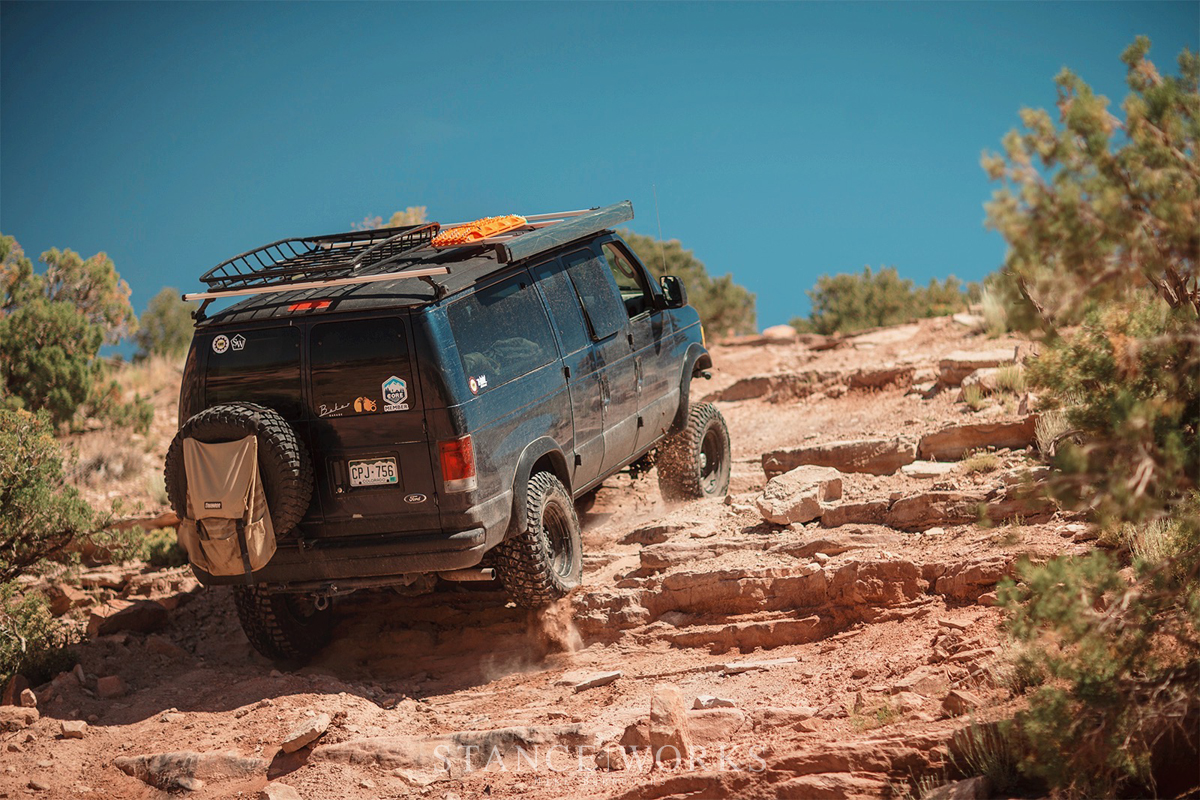 The truck, of course, has all the fixin's, such as an aluminum UJoint front bumper, a rear tire carrier swingout, a winch, and a Thule rack and awning, just to name a few. As exciting as the outside of the truck is, though, it's the inside that leaves a lasting impression. Thanks to the help of his father, a lifelong carpenter and cabinet maker, the van received a complete interior buildout that leaves a lot of housing looking rather lackluster. There's even a rug for decor, inside. 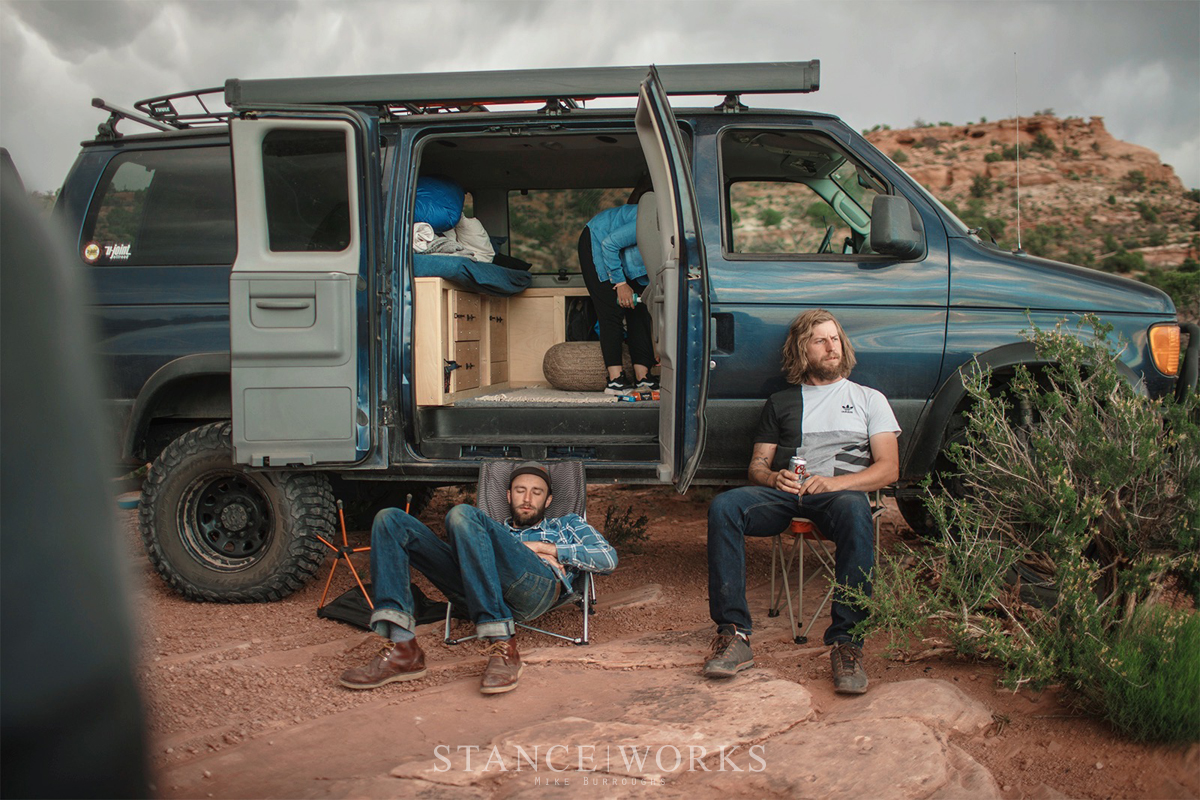 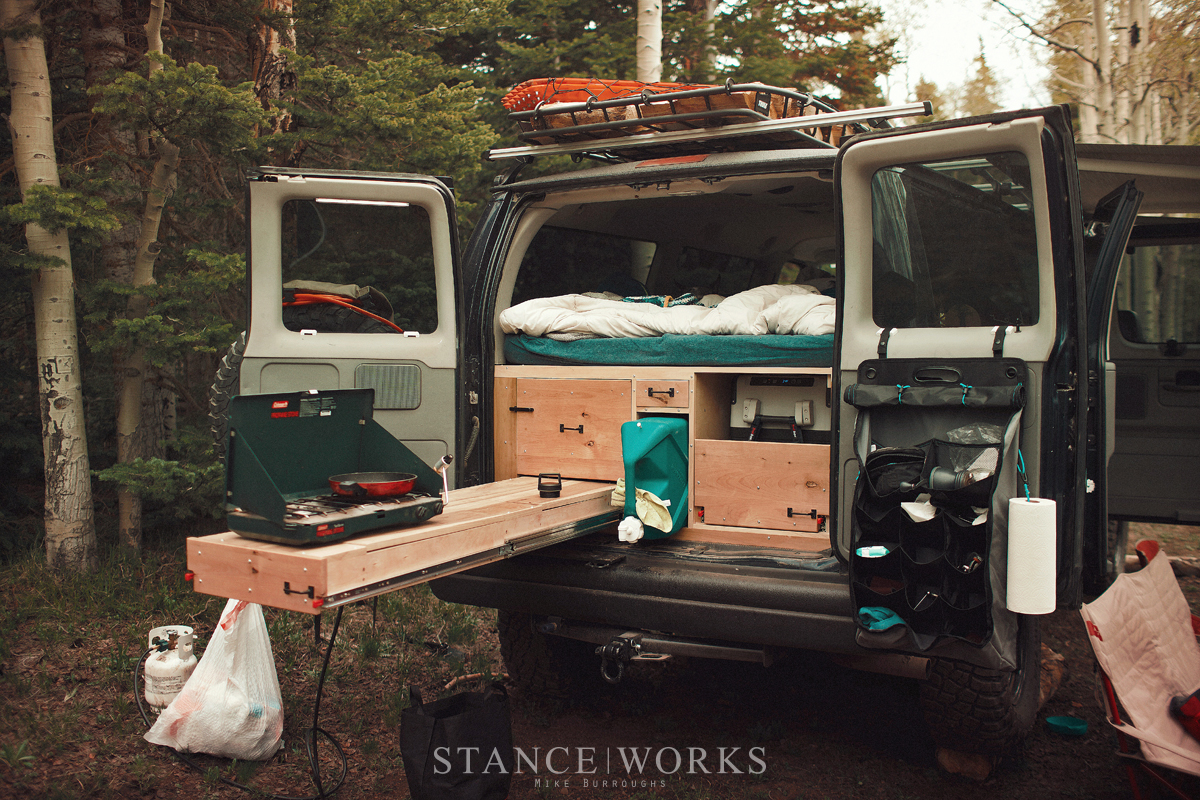 The centerpiece of the interior is the sleeping platform, which measures 6 feet (2m) square, and sits atop an incredible stowage system, which acts as standard storage for clothing, gear, and kit inside the van, and as a complete kitchen assembly at the back. A cooktop workbench, which houses the classic Coleman stove, extends nearly 6 feet out of the back end of the truck for ample cooking and prep space. A 7-gallon water jug rests in the center, and the Dometic fridge slides out on a tilting slider for easy access. The entire assembly, of course, takes up only a portion of the van's interior space, leaving room for ample movement before reaching the captain's chairs at the front. 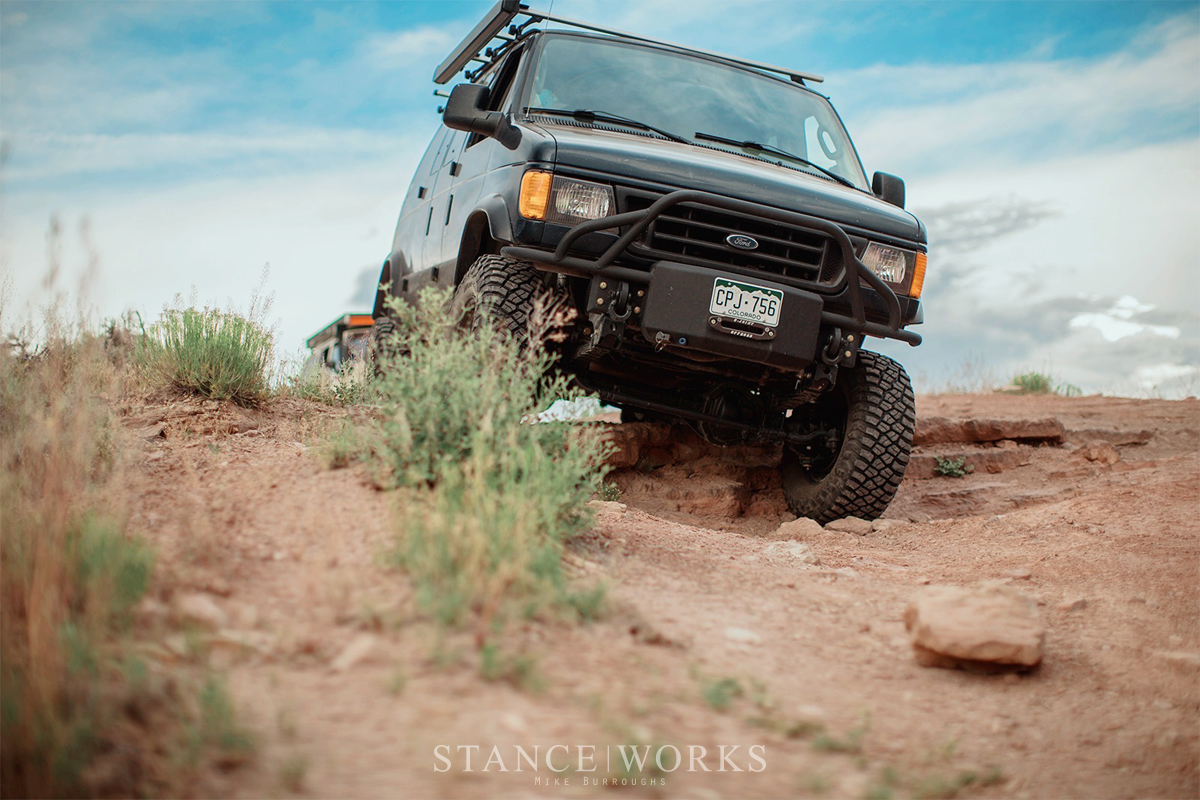 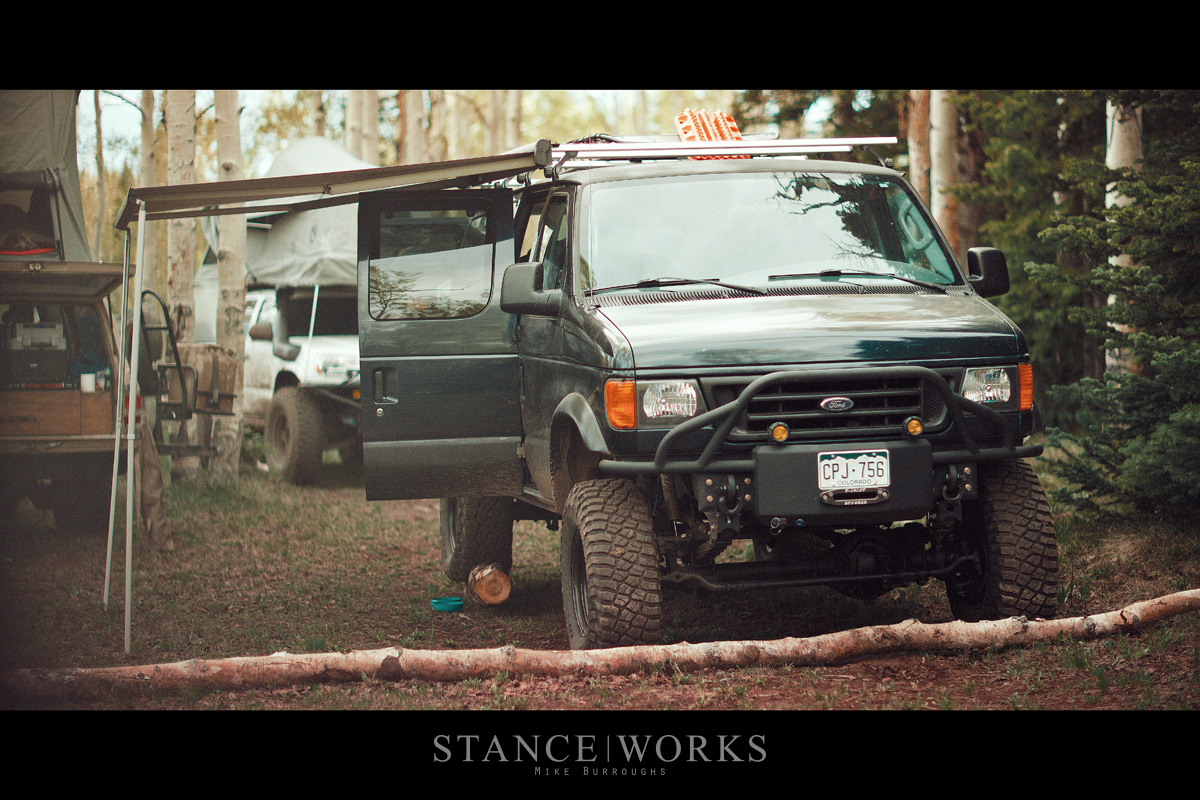 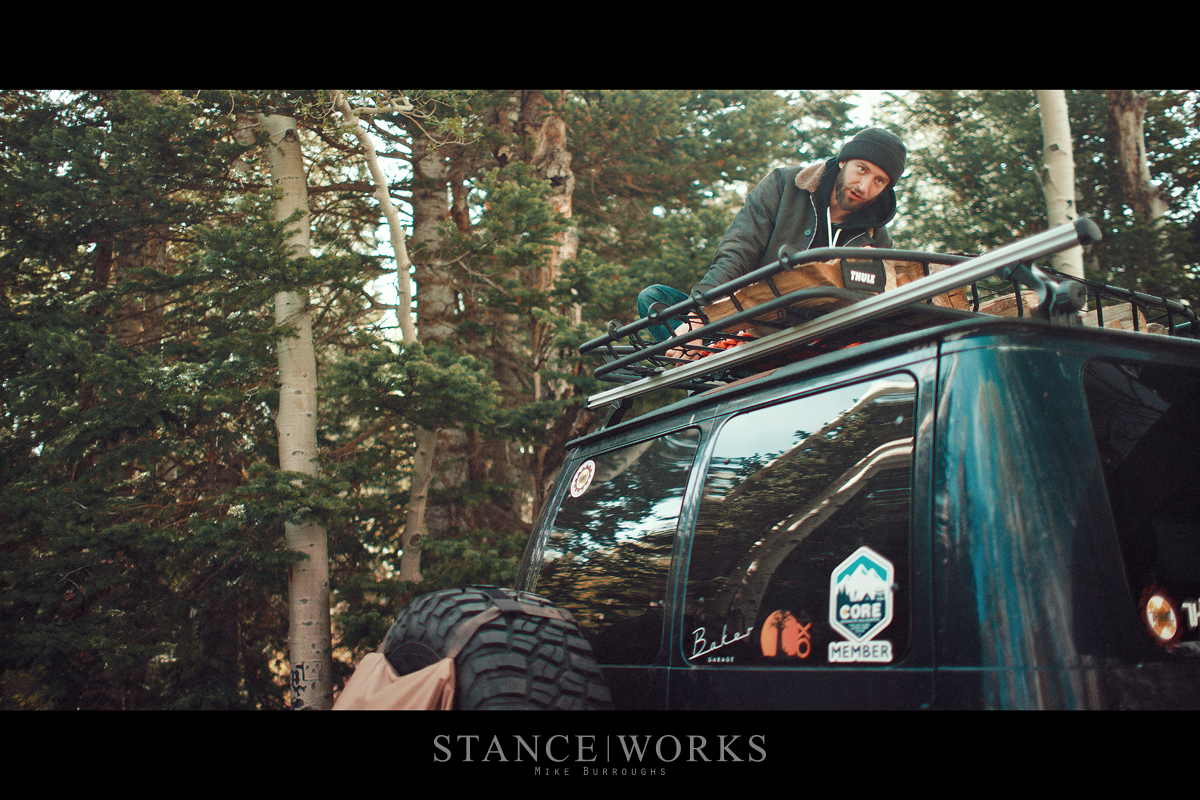 Power, of course, was run throughout the truck for accessories, lighting and additions in the future. An on-board air system and air tank lurk underneath, providing further utility and the necessary equipment for tire fill-ups after days spent on the trail. Of course, there was more to the build than throwing parts and carpentry skill at it, though. Extensive paintwork and some rust repair was required on the van's roof and lower surfaced, which received a toughened coating for future-proofing from the elements. The odds and ends needed to bring the van from a work truck to a place one might want to spend a significant amount of time were needed, too. 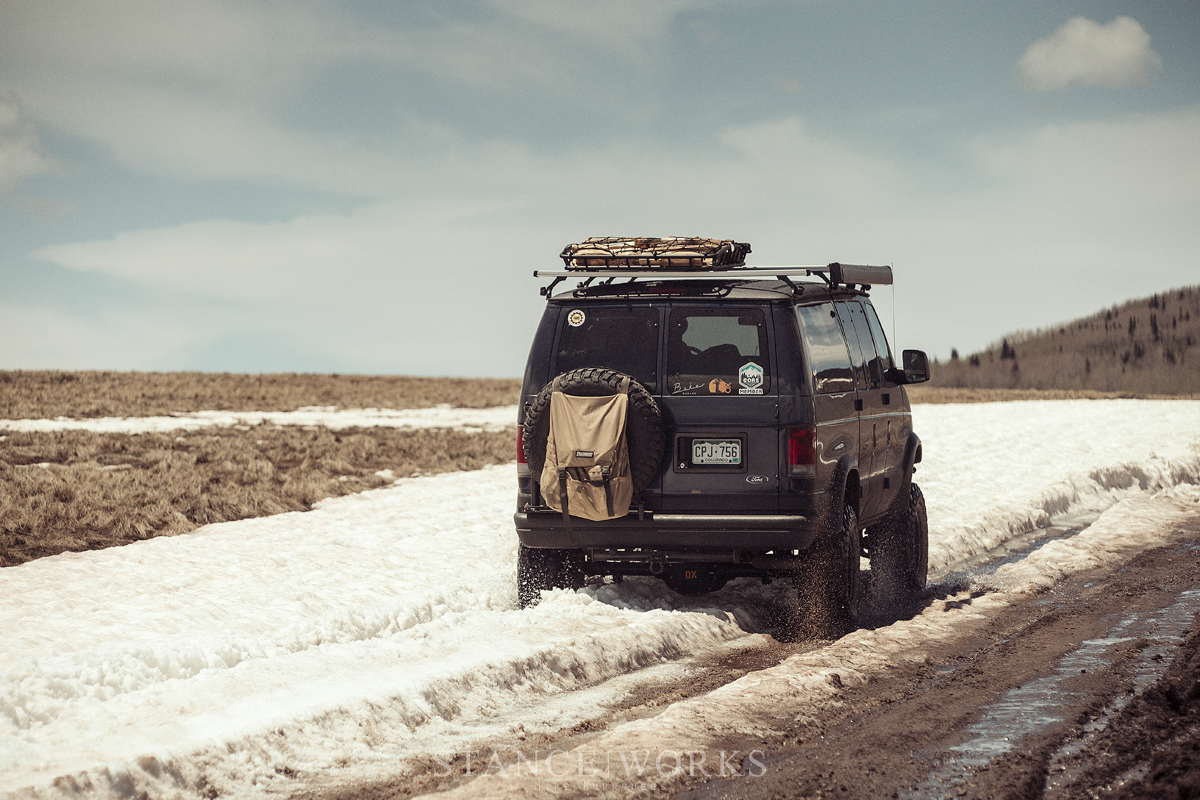 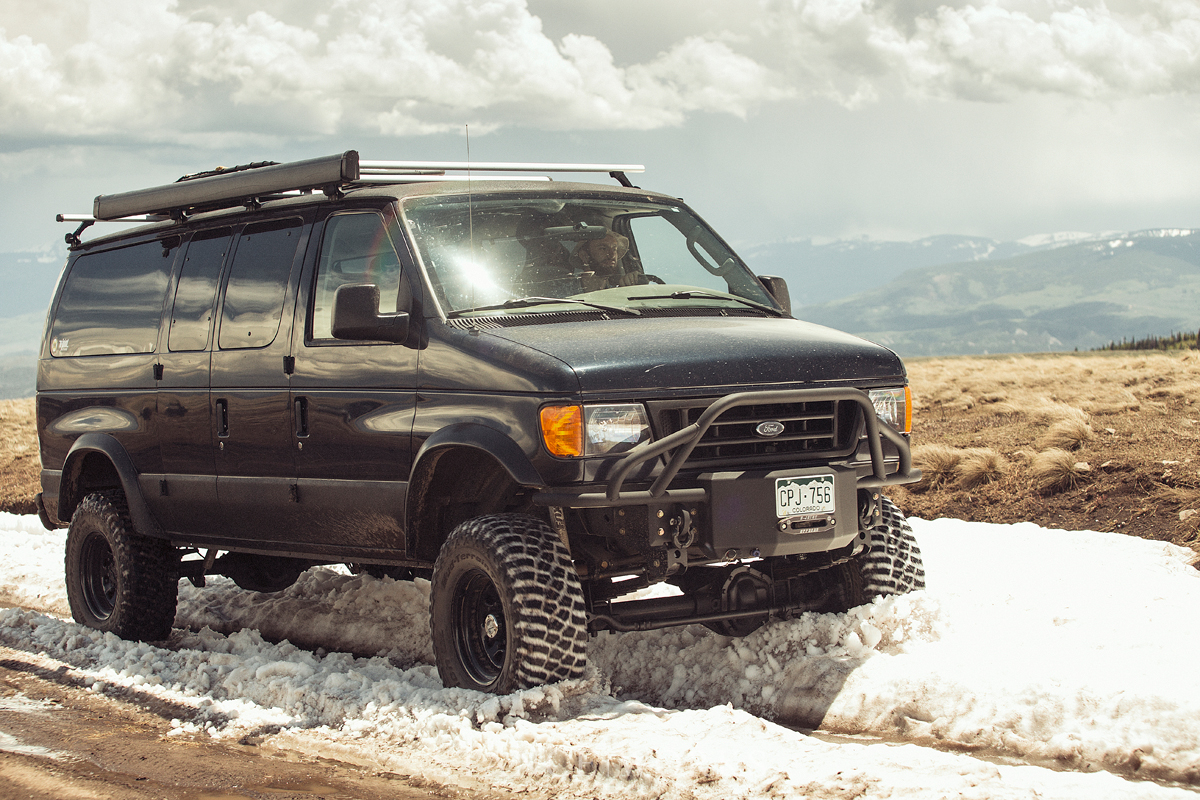 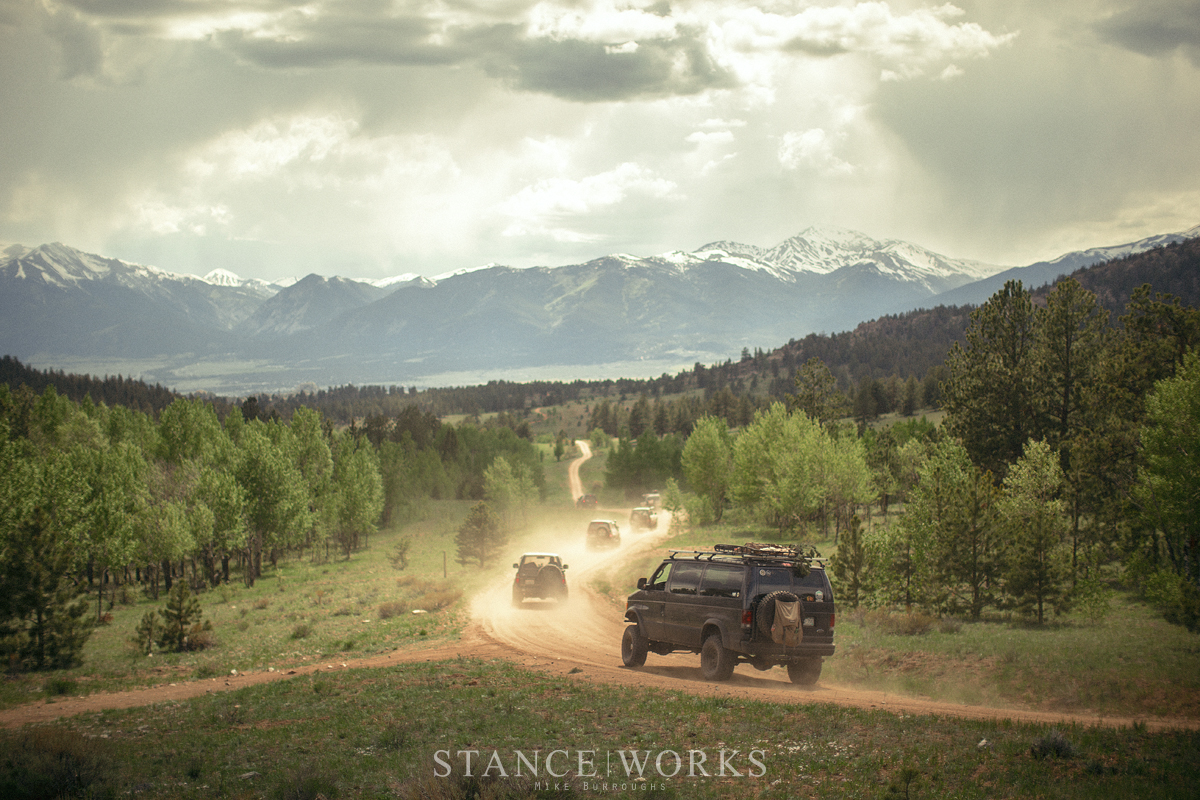 As a fully mobile, fully livable space, its not a far cry from an RV, although its size is confined to a significantly smaller package. The van has function at the forefront of its execution, and the sum of its parts work in unison to deliver what many would consider to be the ultimate camping vehicle. Don't be fooled by the interior temperament: it's a machine Justin can, has, and will push to the limits of tip and traction in the name of finding the ultimate spot. In all, it's a van that is the embodiment of Teddy Roosevelt's iconic saying: "speak softly, and carry a big stick," he says. "You will go far."  The E-150 at hand is an unabashed take on building a truck to suit every purpose at hand, and we'll happily say, it's a take well done. 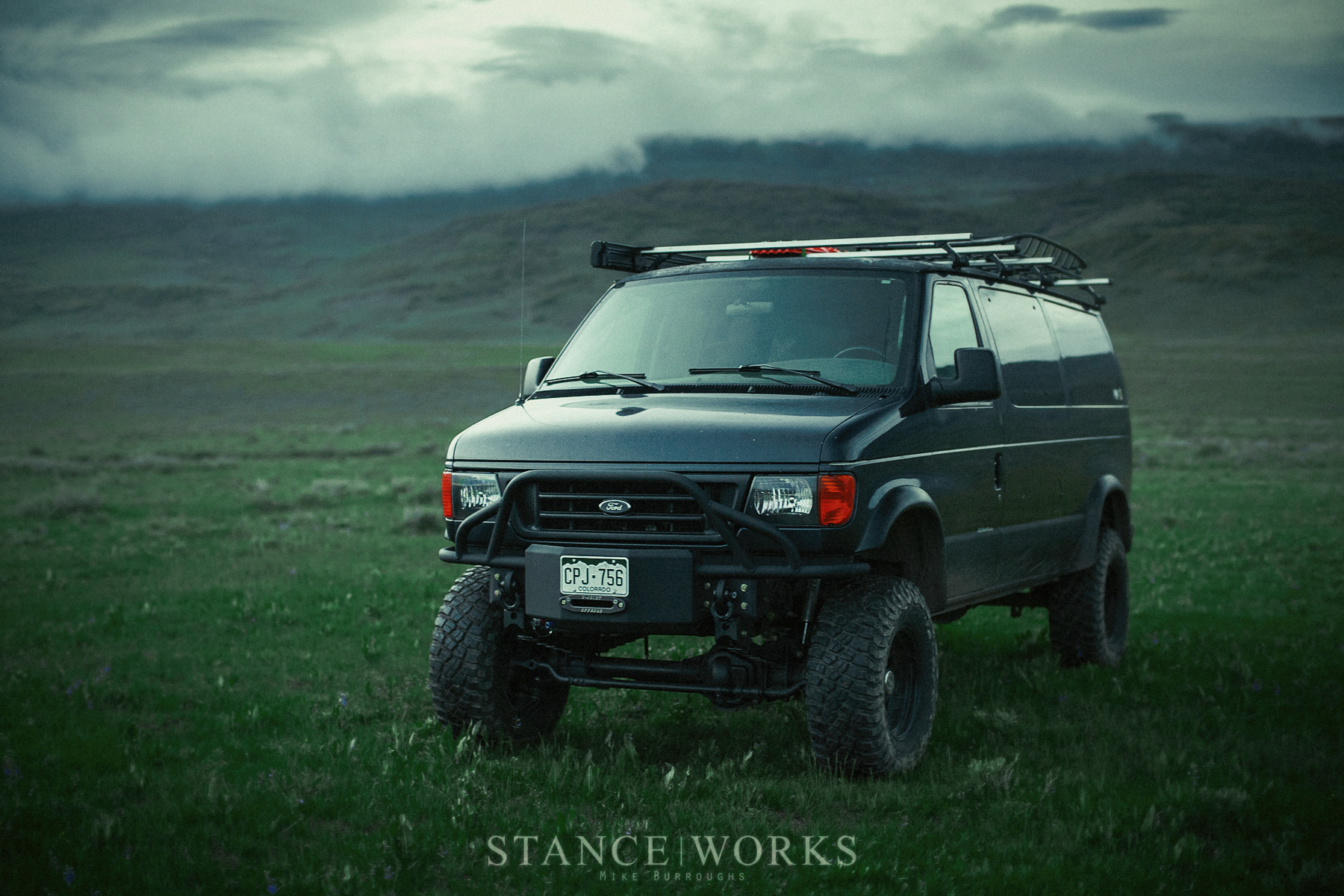 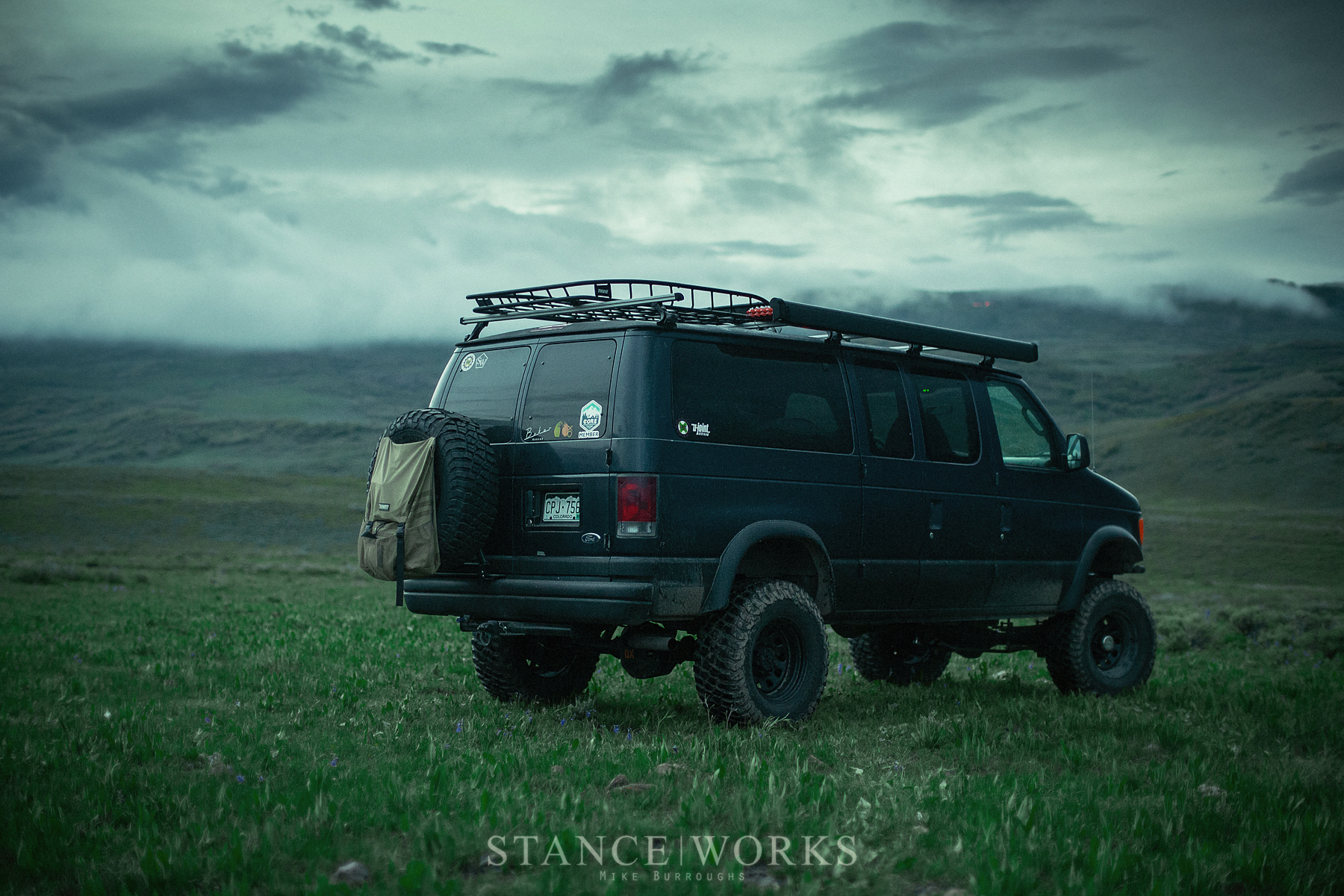