When it comes to Stateside car culture, it's difficult to remember the Audi marque much further back than the 1980s, with the Audi Fox standing as one of only a few prior examples most enthusiasts might be familiar with. Despite that, Audi's history is a complex one, dating back more than a century, to a gentleman named August Horch and his founding of Audi Automobilwerke GmbH in 1910. In 1932, the Auto Union was formed, which brought about Audi's iconic four interlocking rings. Audi as we know it today, though, began in the 1960s, when the brand was acquired by Volkswagen. 1965 saw the launch of the Audi F103, and 1969 saw the merger of Auto Union with NSU, ultimately yielding the company we know today. 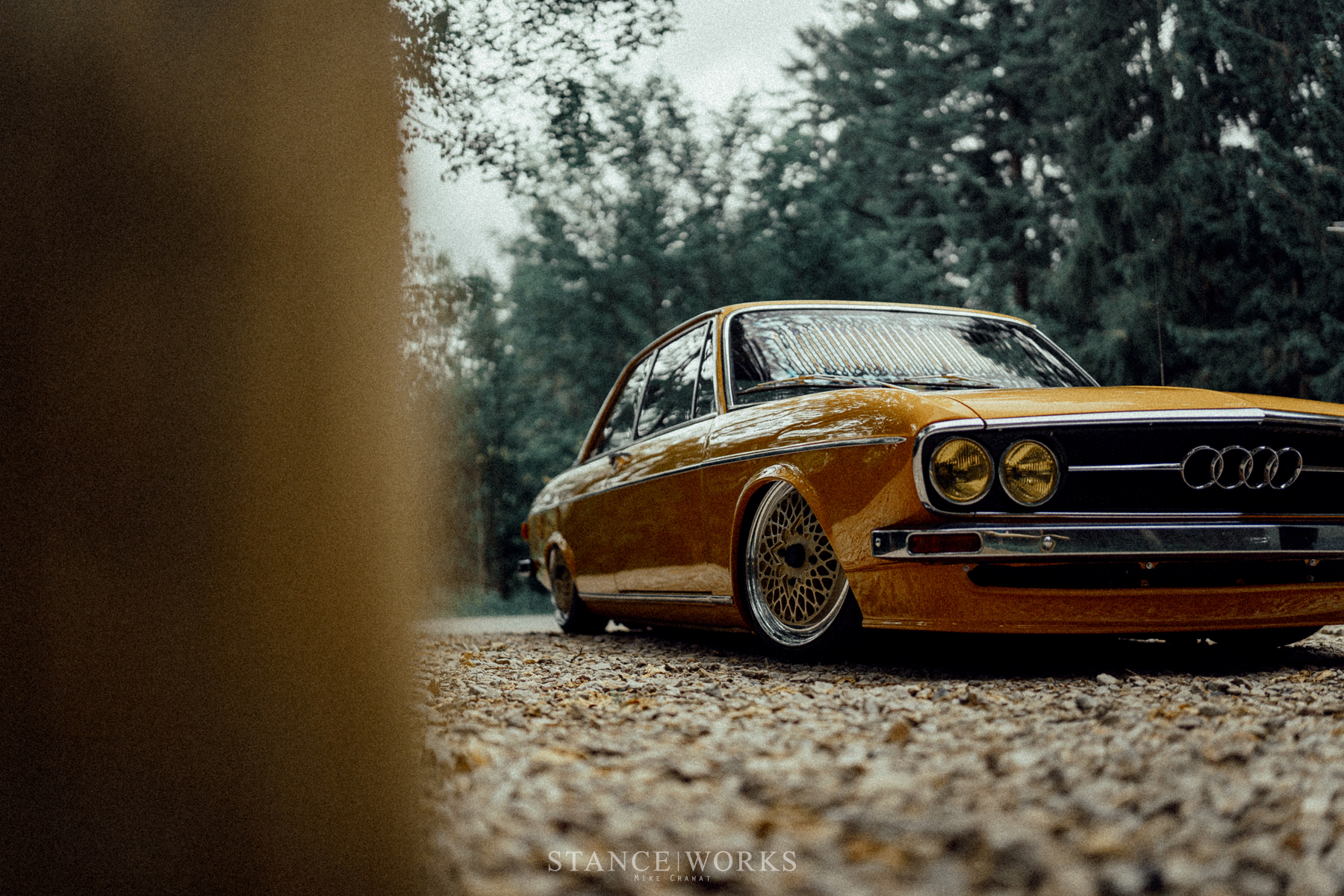 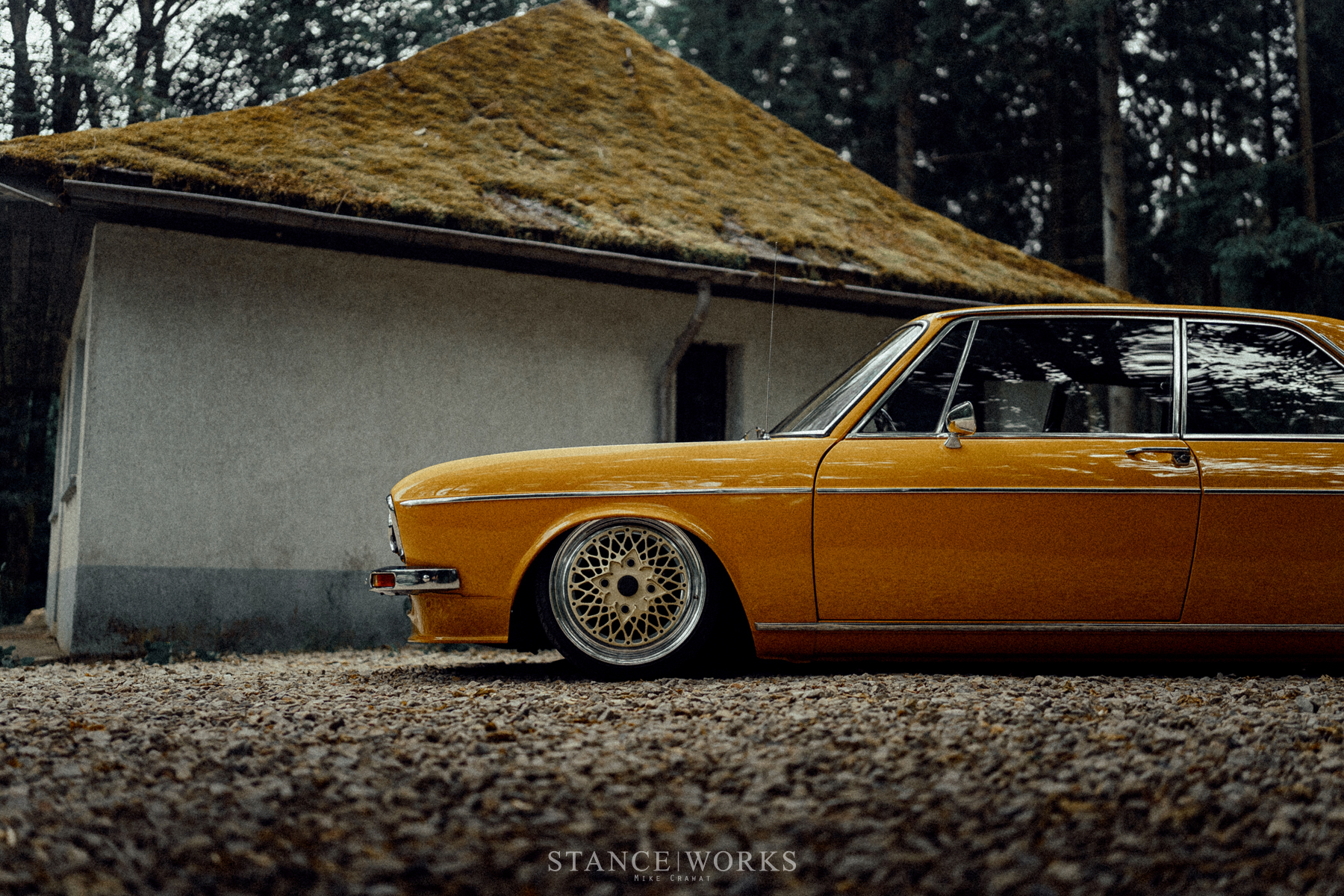 That, of course, makes David Müller's 1972 Audi 100 LS an example of the earliest modern Audis, having been introduced in 1968 as the F104 or "C1" chassis. Its name, the 100, denoted its power output, provided by a 1.8-liter inline four in a front-engine front-wheel-drive layout. Offered initially as a two- and four-door sedan, and later a fastback coupe, the Audi 100 saw tremendous success, with total production numbers exceeding 800,000 cars built. The platform was even offered in the United States starting in 1970; however, saying that they're "few and far between" might be an overstatement. 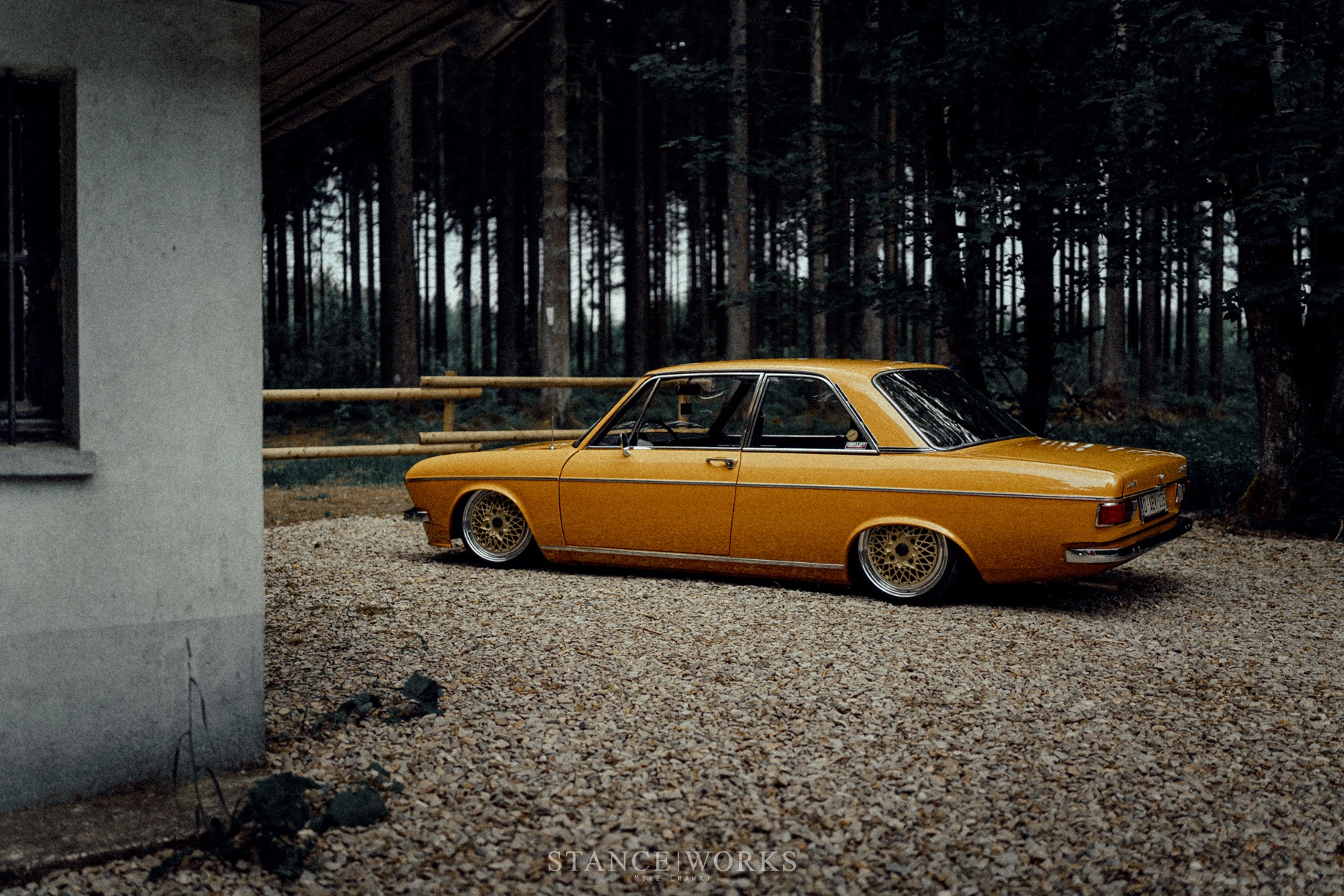 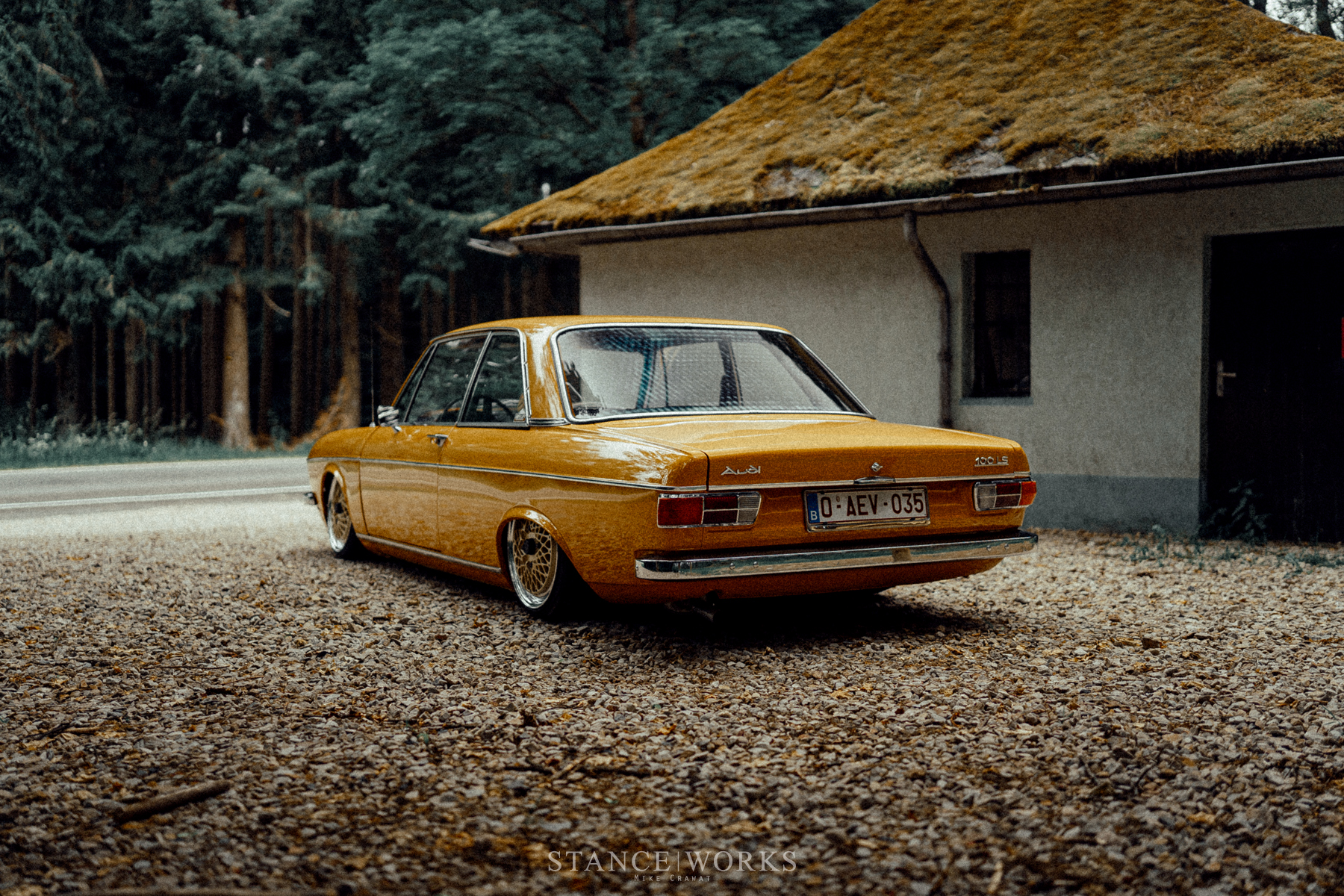 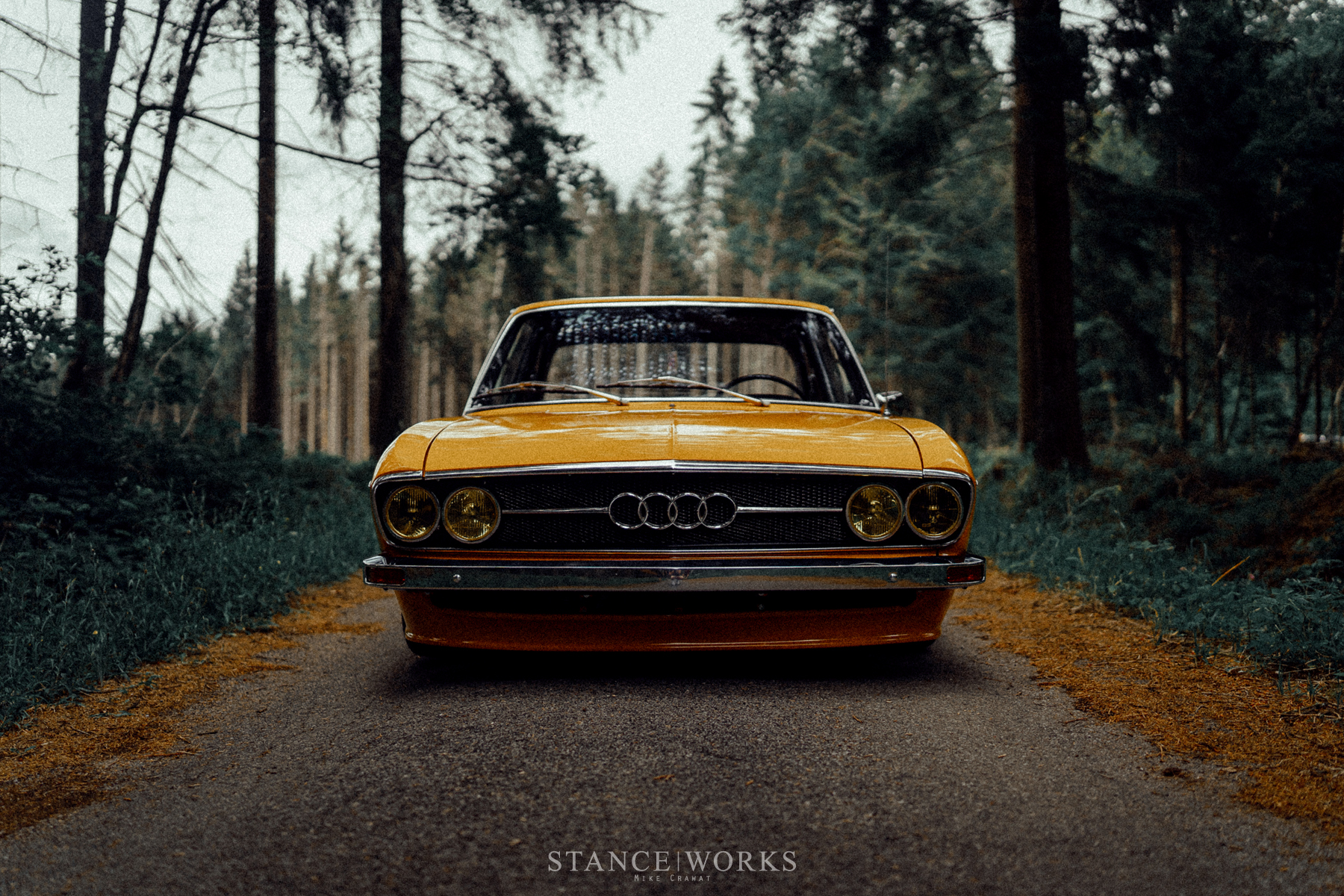 For David Müller, the Audi 100 has always offered a sense of draw. As a Belgian native, he's quick to admit that even there, the platform is both rare and expensive, which for years meant that his vision for such a build was more dream than plan. Fate had other plans, though, and during a remote work session just 5 kilometers (3 miles) from his workplace, he passed by an Audi 100 C1 parked on the roadside, with a for-sale sign in the window. David knew immediately, it was time to spring into action. On his way back to work, he stopped for a closer look, which revealed a pre-facelift Tibetorange 100, with a black interior and column shifting: everything he could hope for. David hurried back to work and finished his shift, and as soon as he was free, he returned to purchase the car. 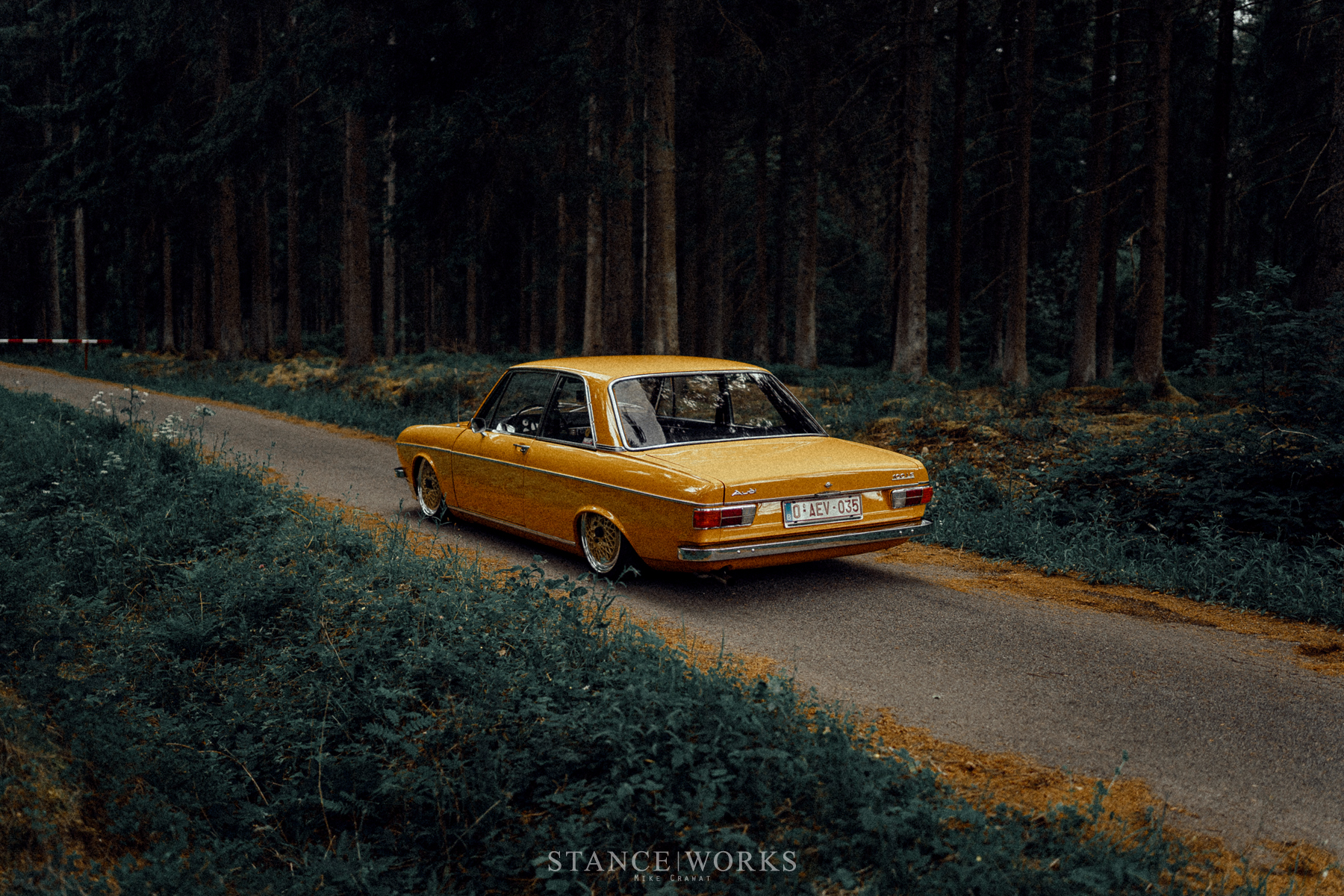 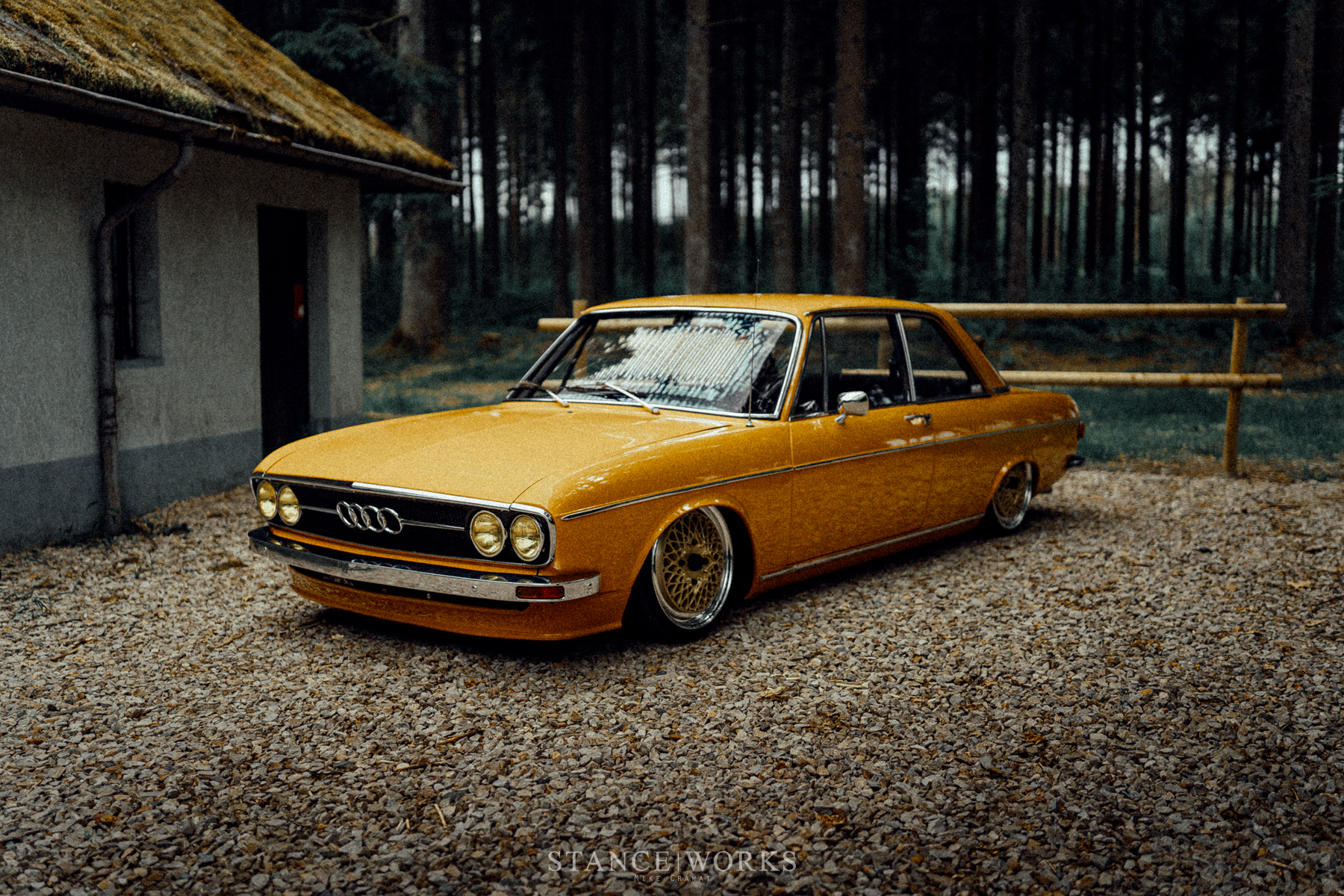 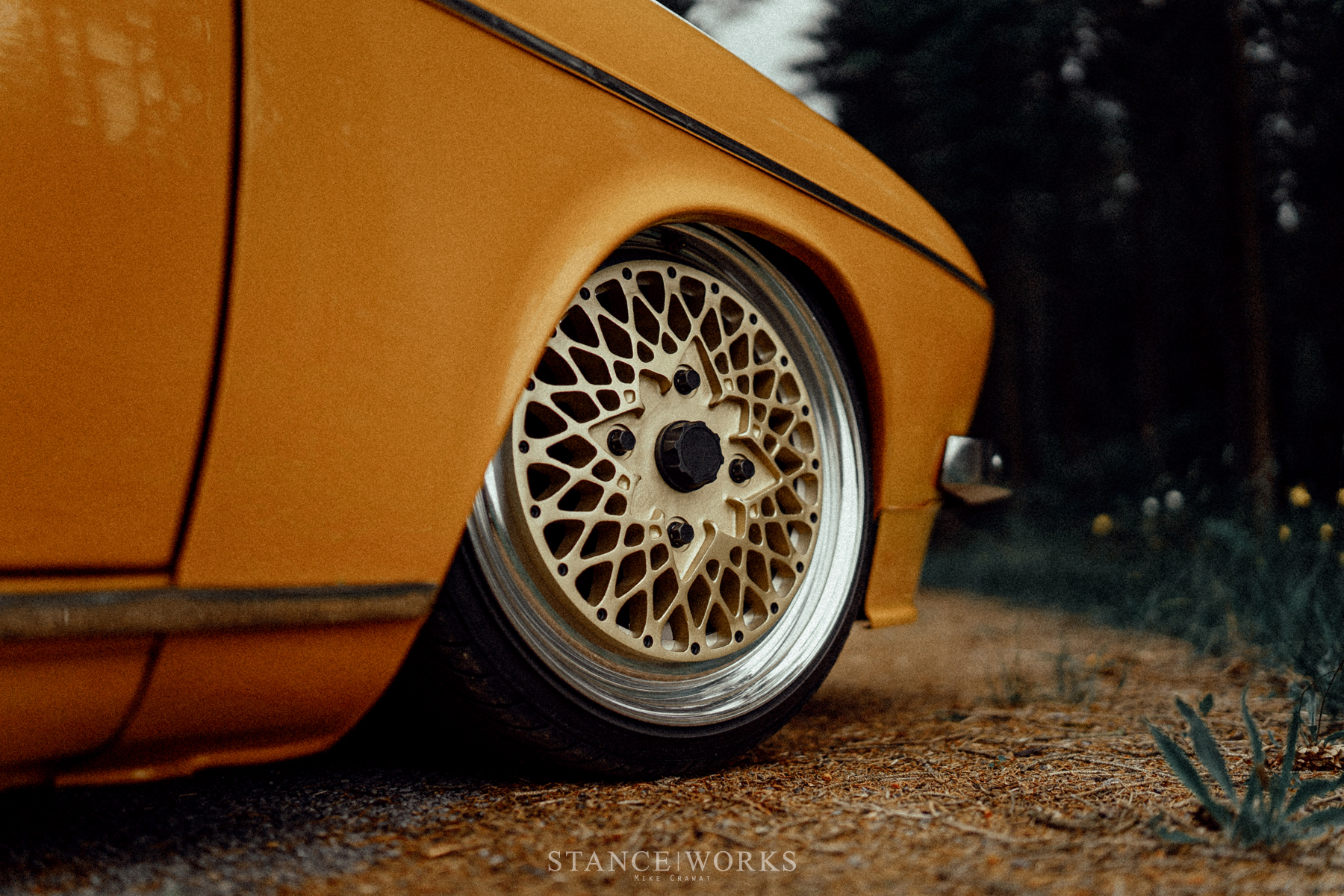 David knew from the get-go that the car was in need of love: the paint was worn, the engine was tired, and the transmission was missing second gear entirely, to scratch the surface. Thankfully, home was just one town away, allowing David to limp the sedan home and dive in head-first. For better or worse, the flaws were quick to surface, and it wasn't long before David knew the car would need a complete restoration. 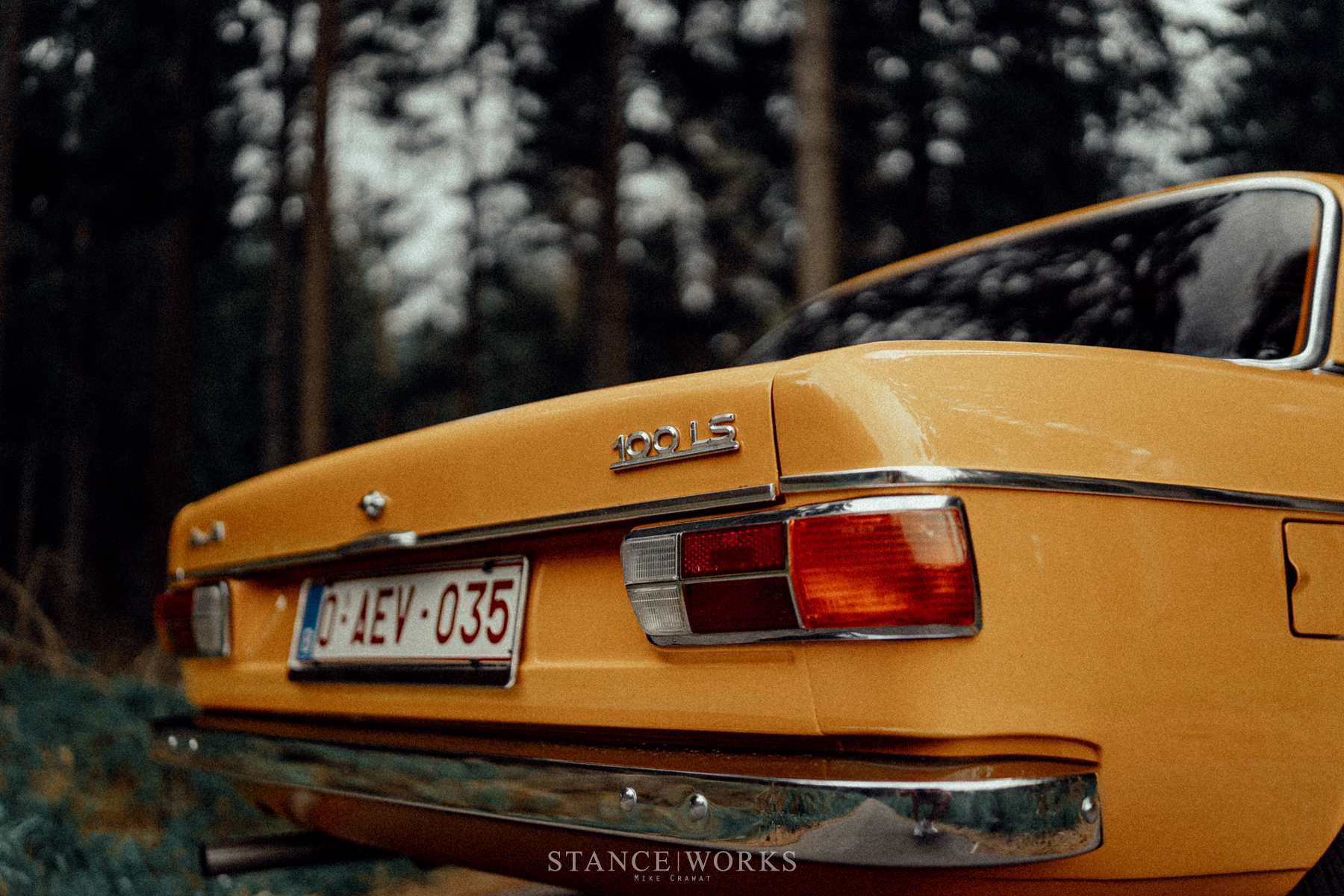 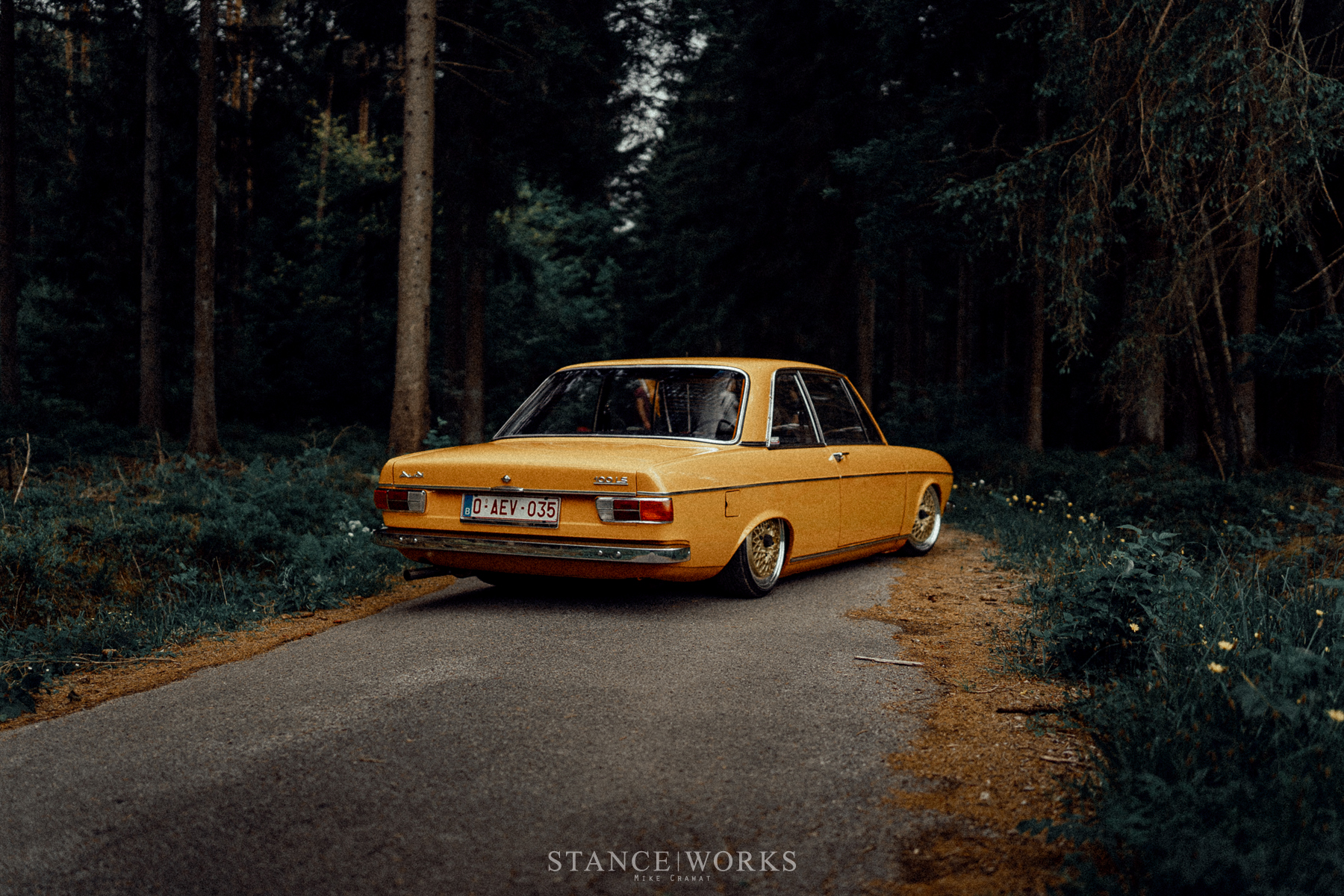 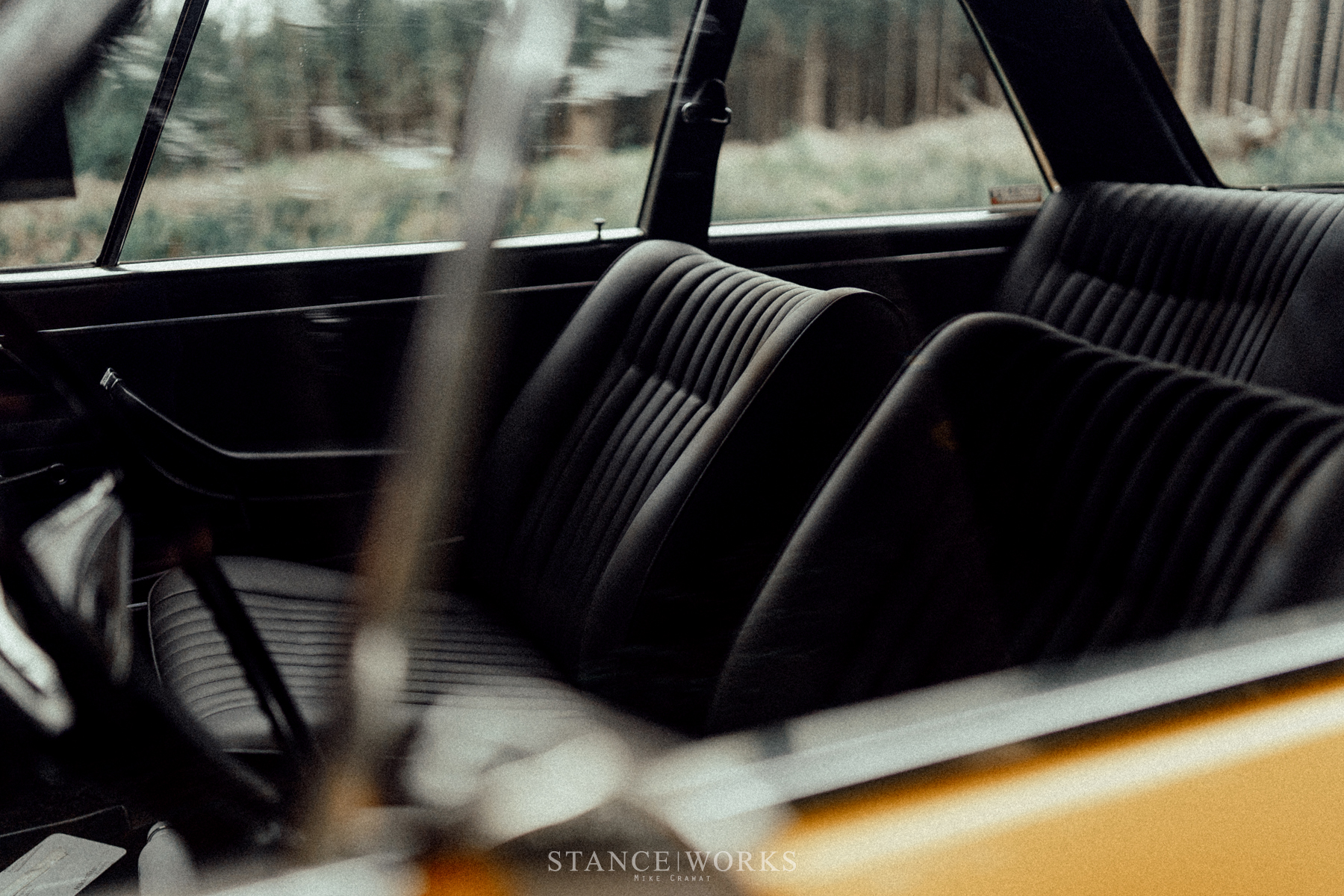 David's list begins with the engine: following the failure of the original lump, David sourced an engine from the 100 Coupe, which was blessed with the largest displacement engine available for the platform, at 1.9 liters. With 113 horsepower on tap, it's not what most would consider to be "powerful," but it's decisively the best period-correct and nearly-original option available for the car, and a 13% increase in power is nothing to scoff at. For the transmission, David rebuilt the original unit with donor parts. 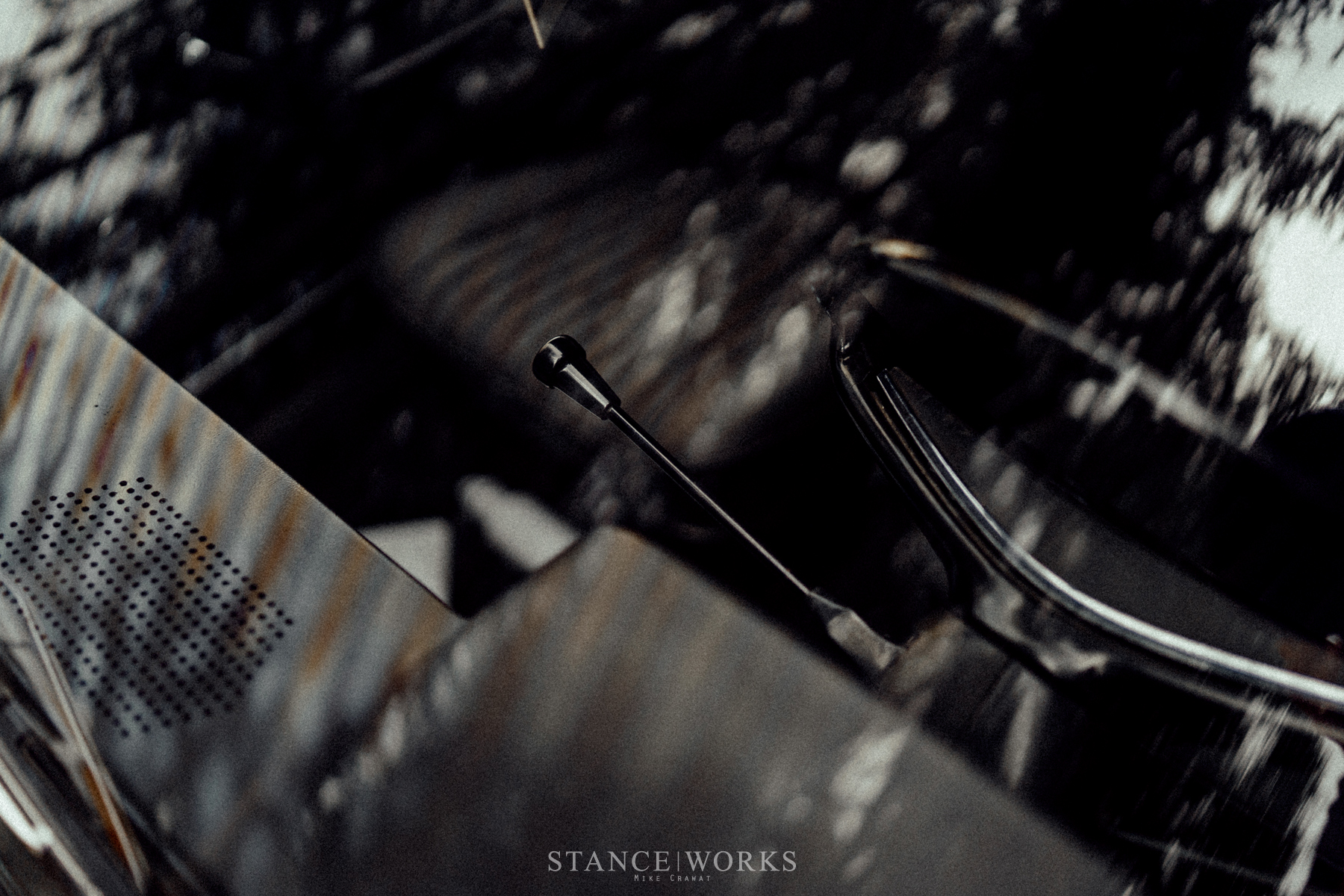 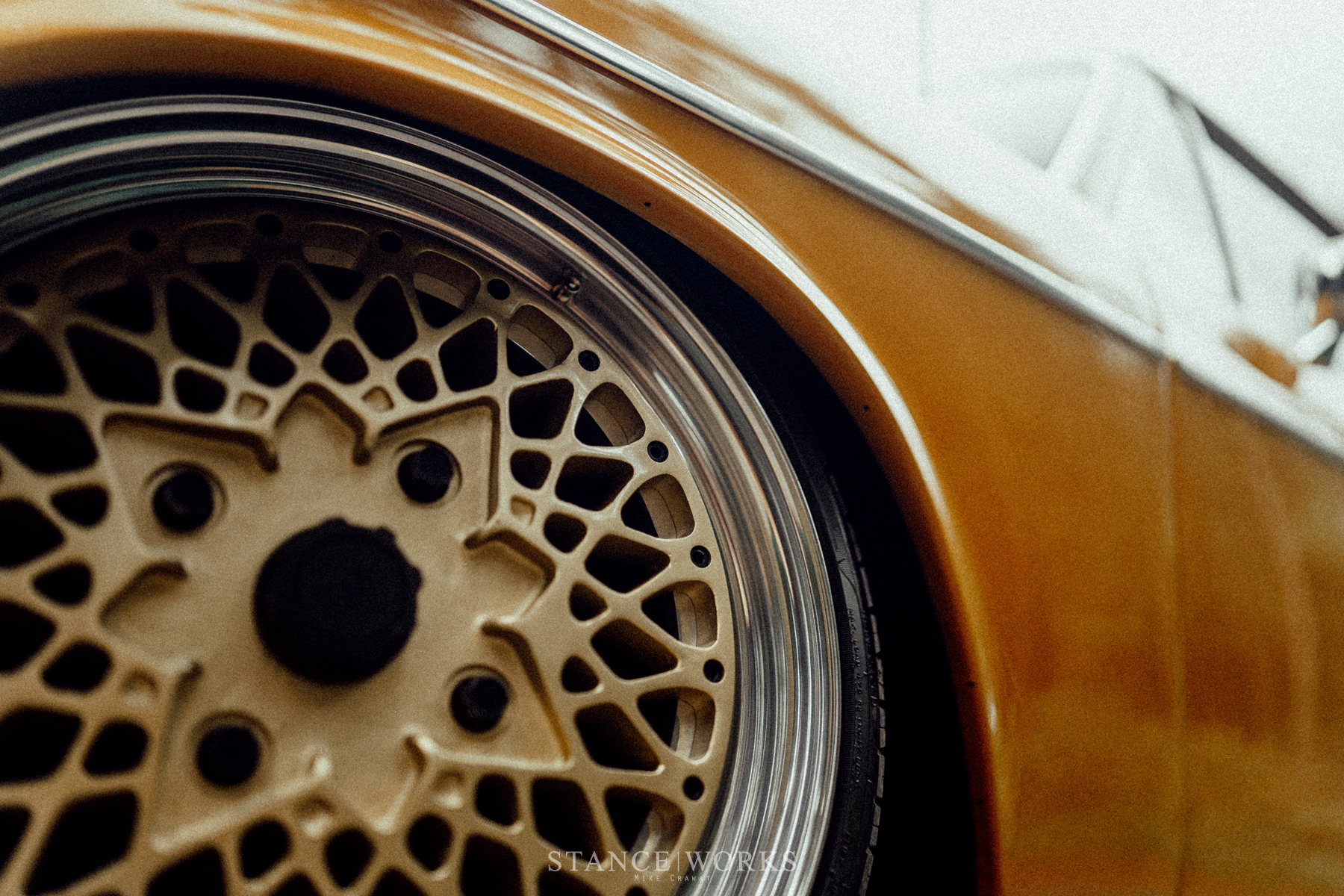 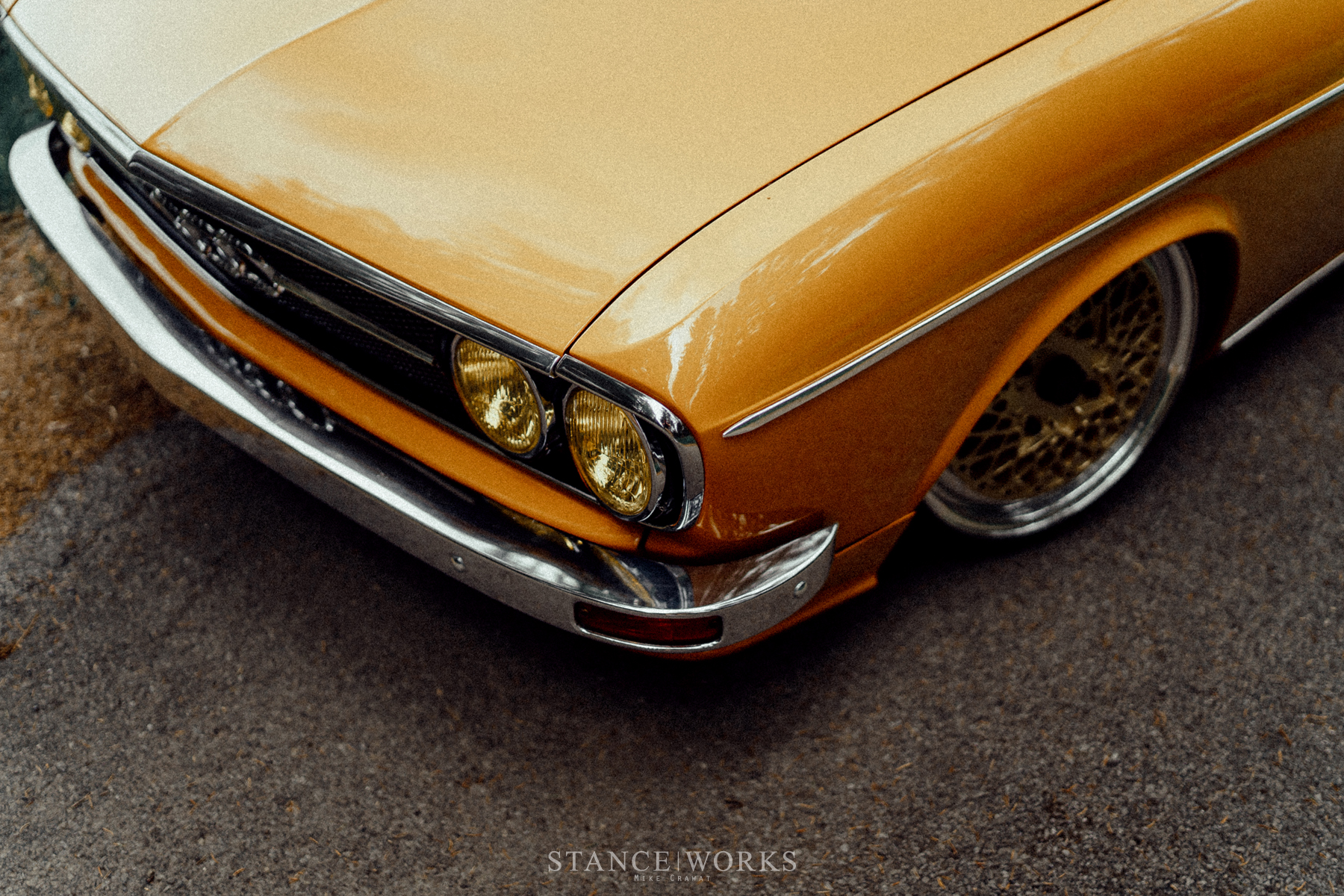 Inside the car, David had the front and rear seats reupholstered with black leather, and undertook redoing the leadliner himself with the help of a friend. Today, the interior is all black, but otherwise trimmed to all-original spec, as though it came that way from the factory. 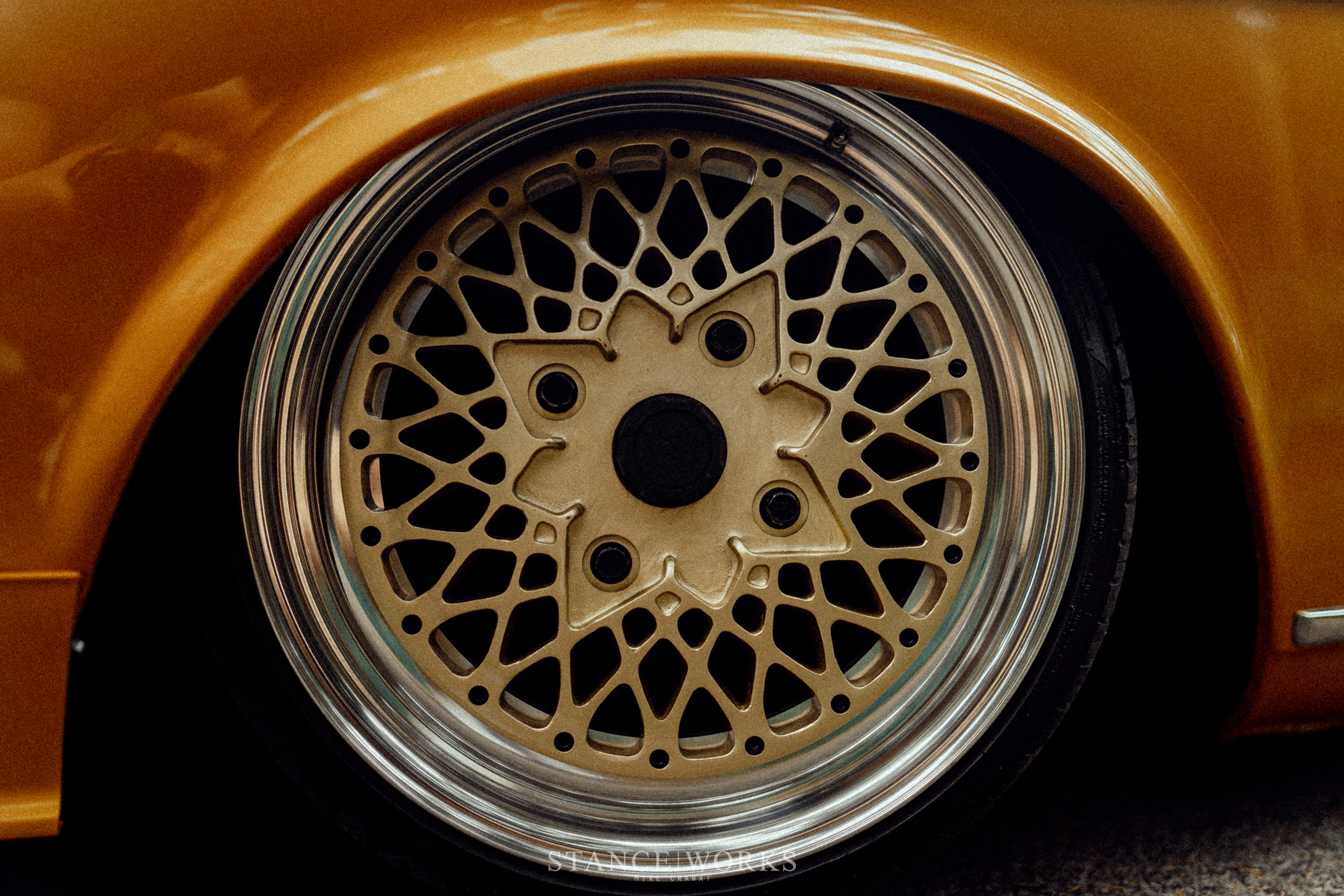 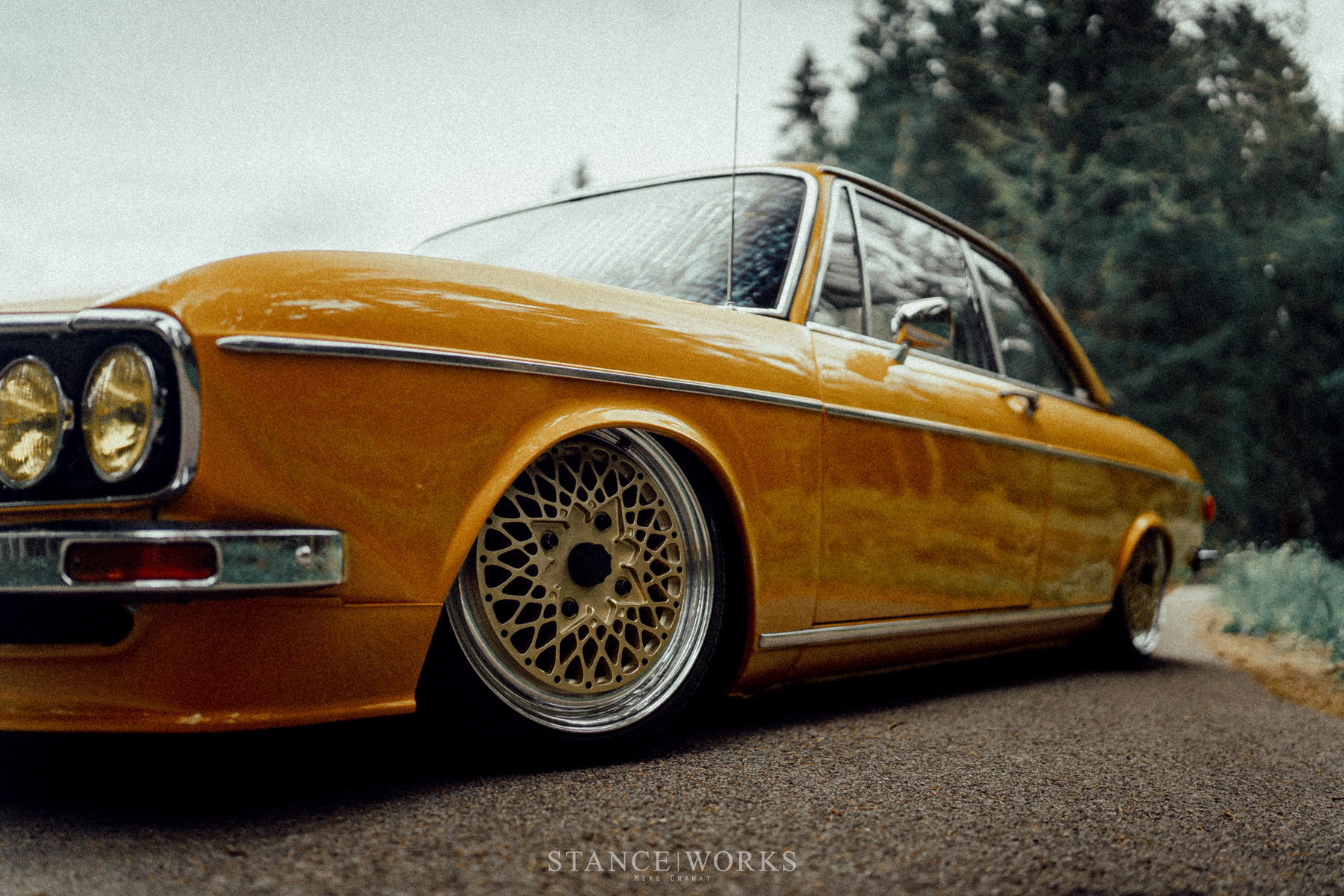 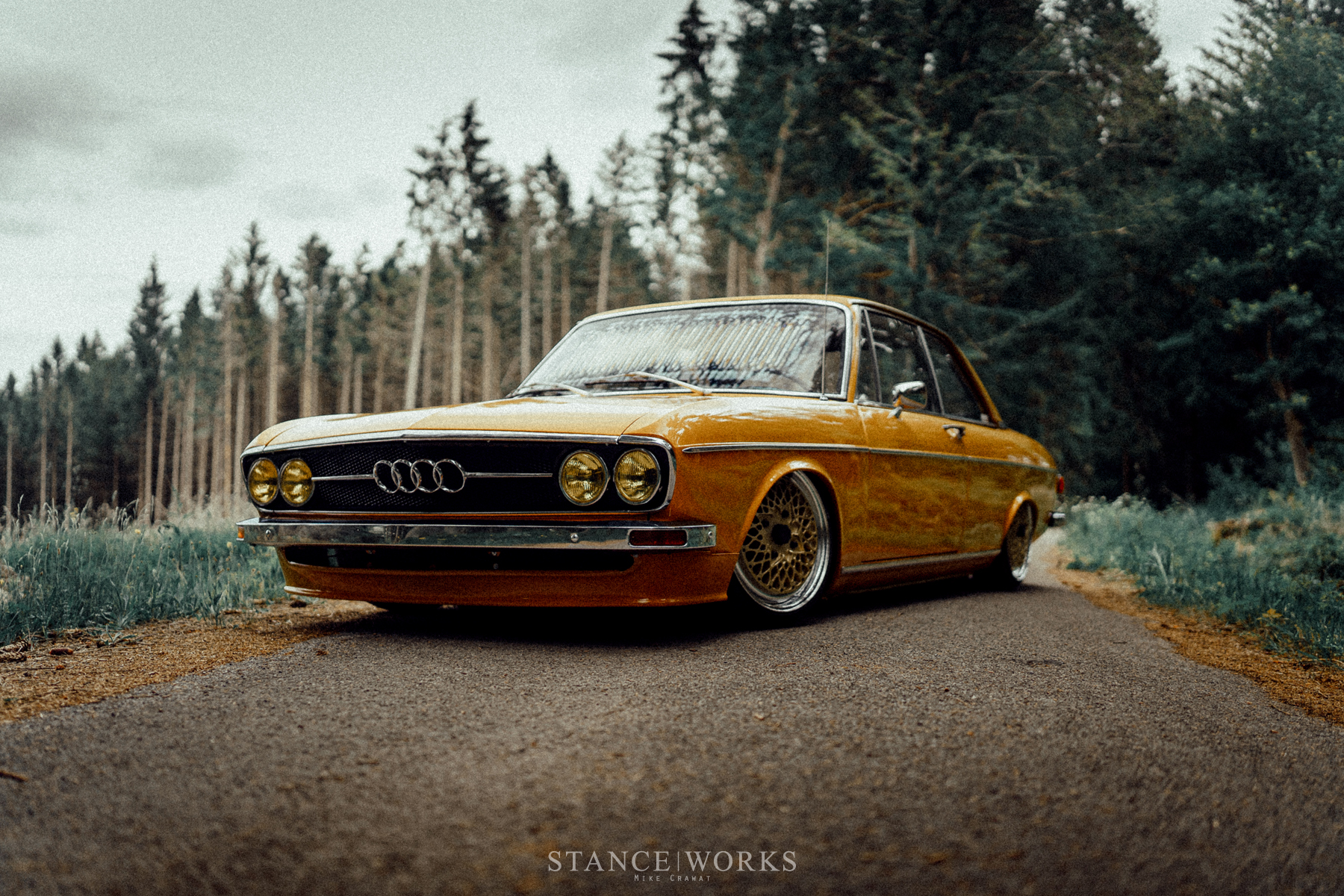 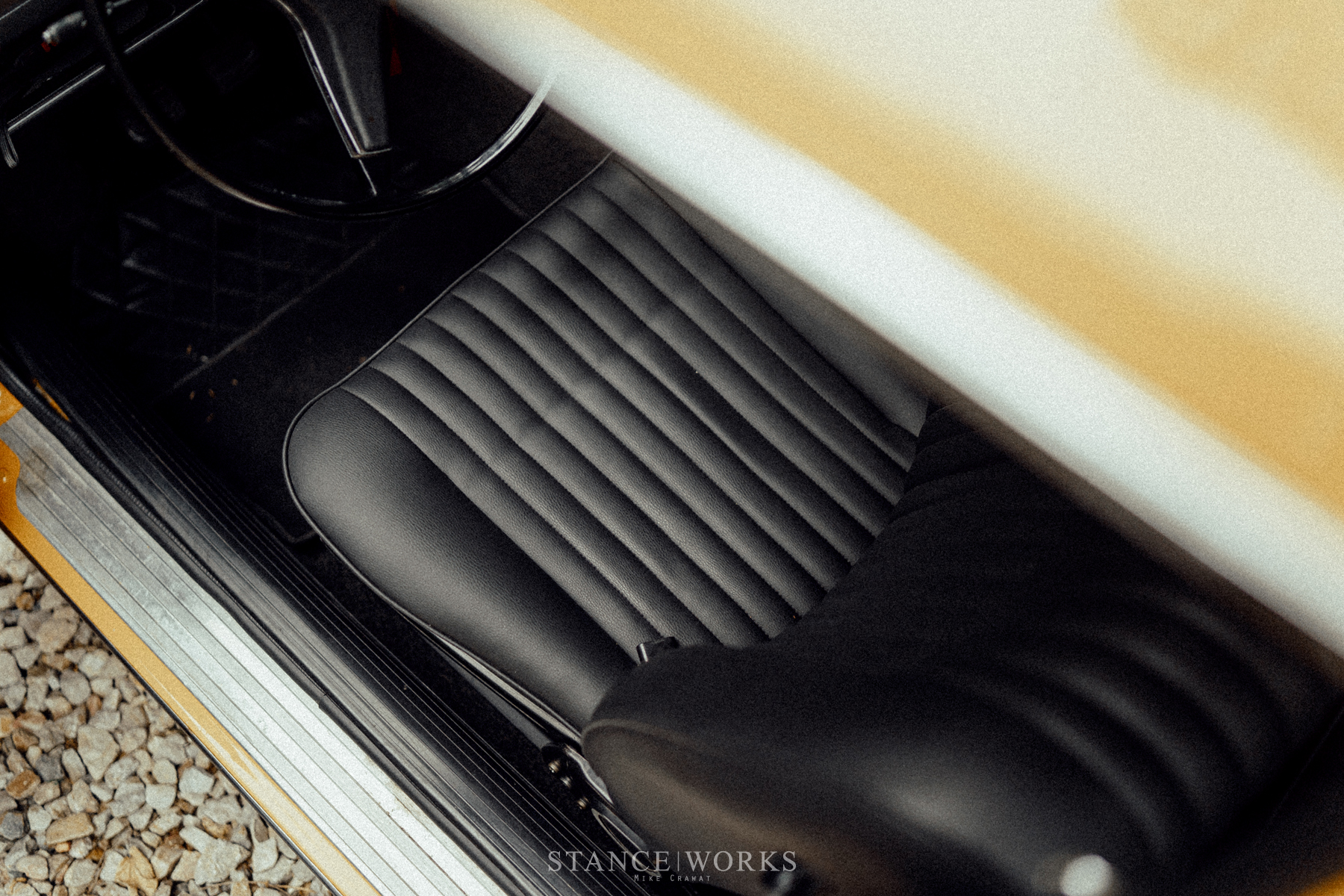 The car's exterior is where the creative liberties really begin. Although the car was fully repainted in its original hue of Tibetorange, and given the full rust repair treatment, David opted to change the nose of the car to the GL trim level. Originally equipped with a pair of glass housing headlamps, the GL trim favors a set of four round units, an obvious upgrade in our opinion, and fitting thanks to the "GL" level engine pulled from the coupe. Further exterior touches include a front spoiler from the Audi 100 C2, and of course, the wheels. 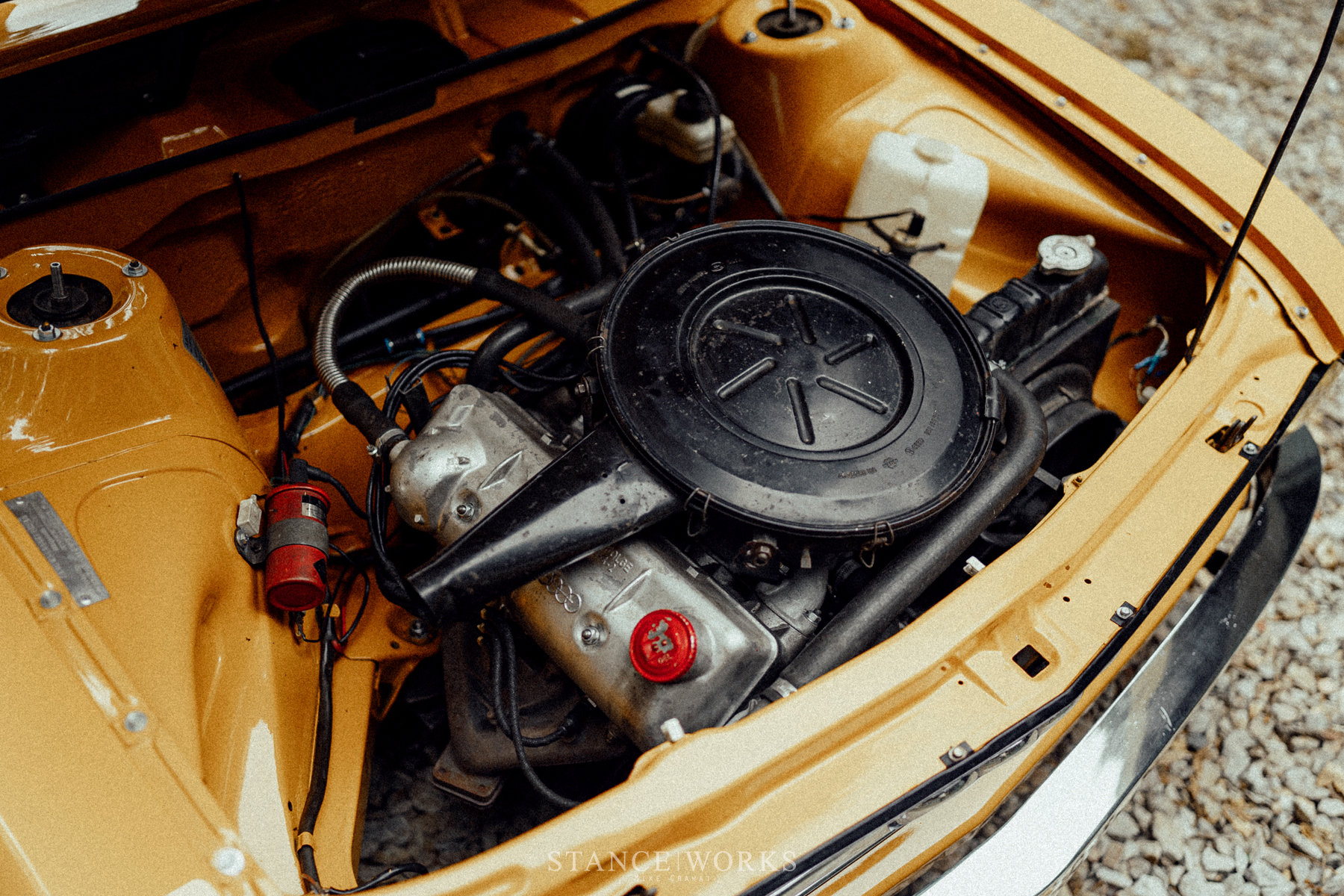 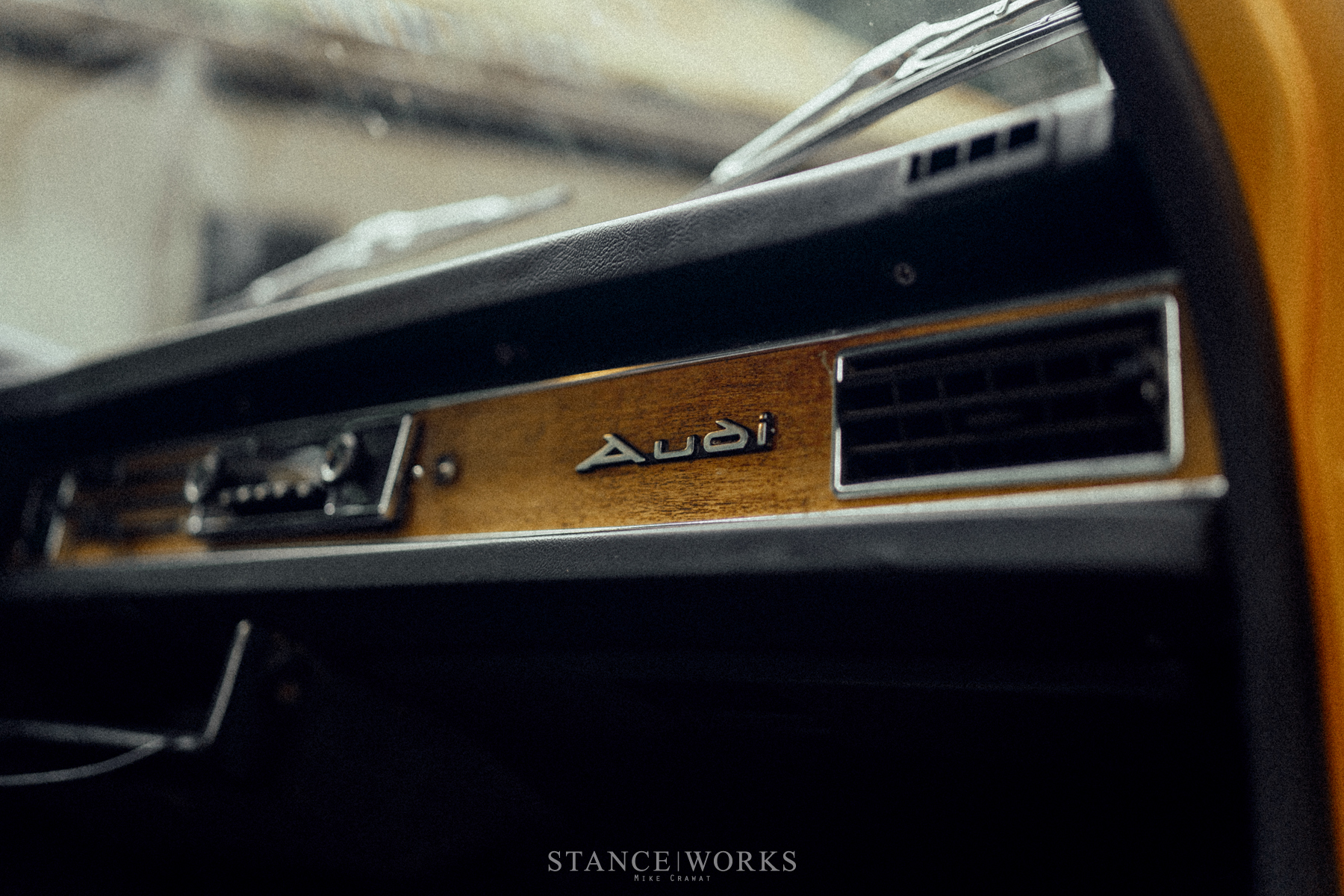 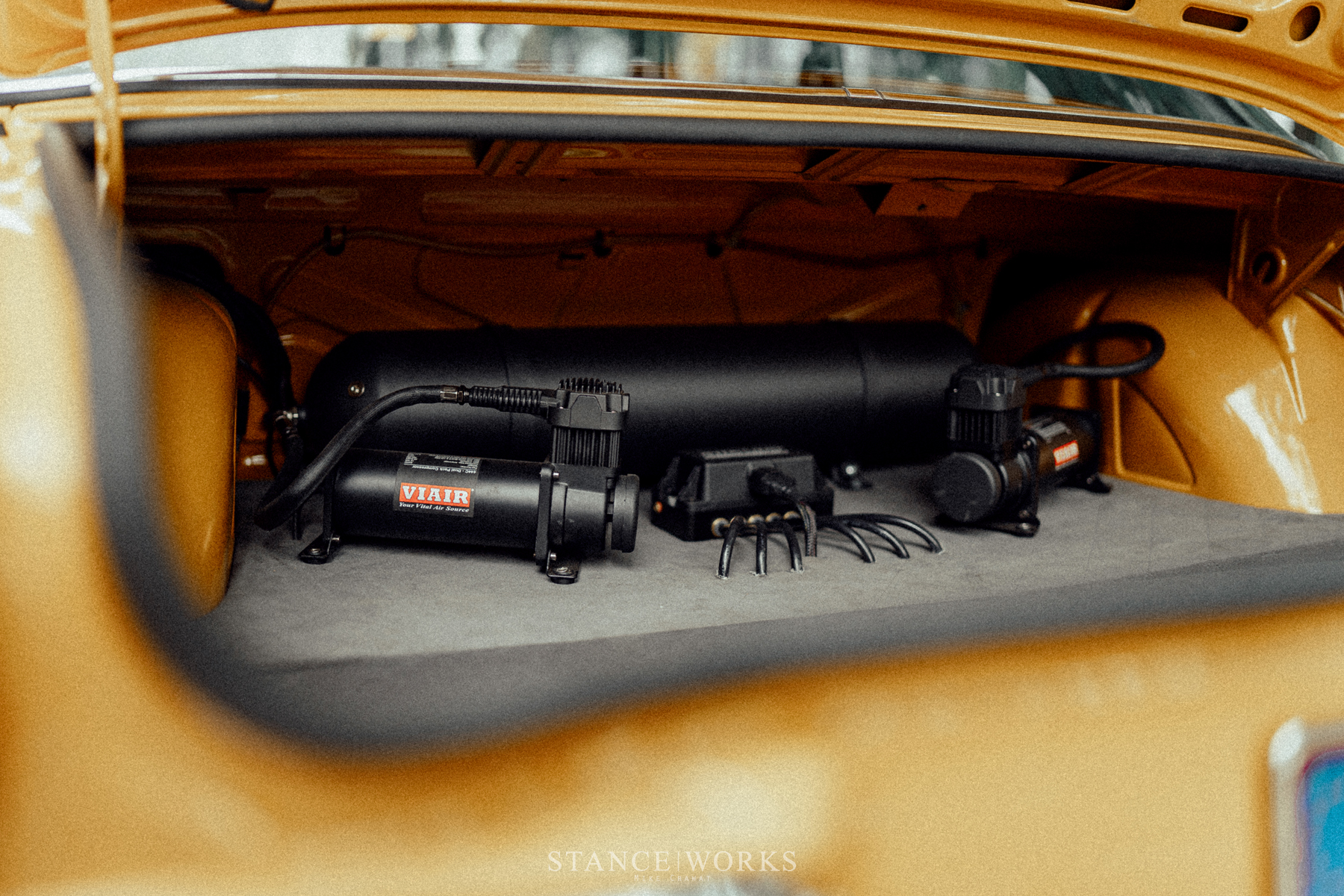 As a classic car, the wheel wells are anything but wide, only allowing for a set of 17x7s to fit with room to clear. David found a set of custom-built 3 piece wheels that fit the car, but required redrilling to the car's rather unique 1x140 bolt pattern. Itty bitty 185/35R17 tires are fitted. Then, of course, is the suspension: a custom-built setup from HP Drivetech, utilizing Airlift 3P management for control inside the car, allowing for daily-drivable comfort. 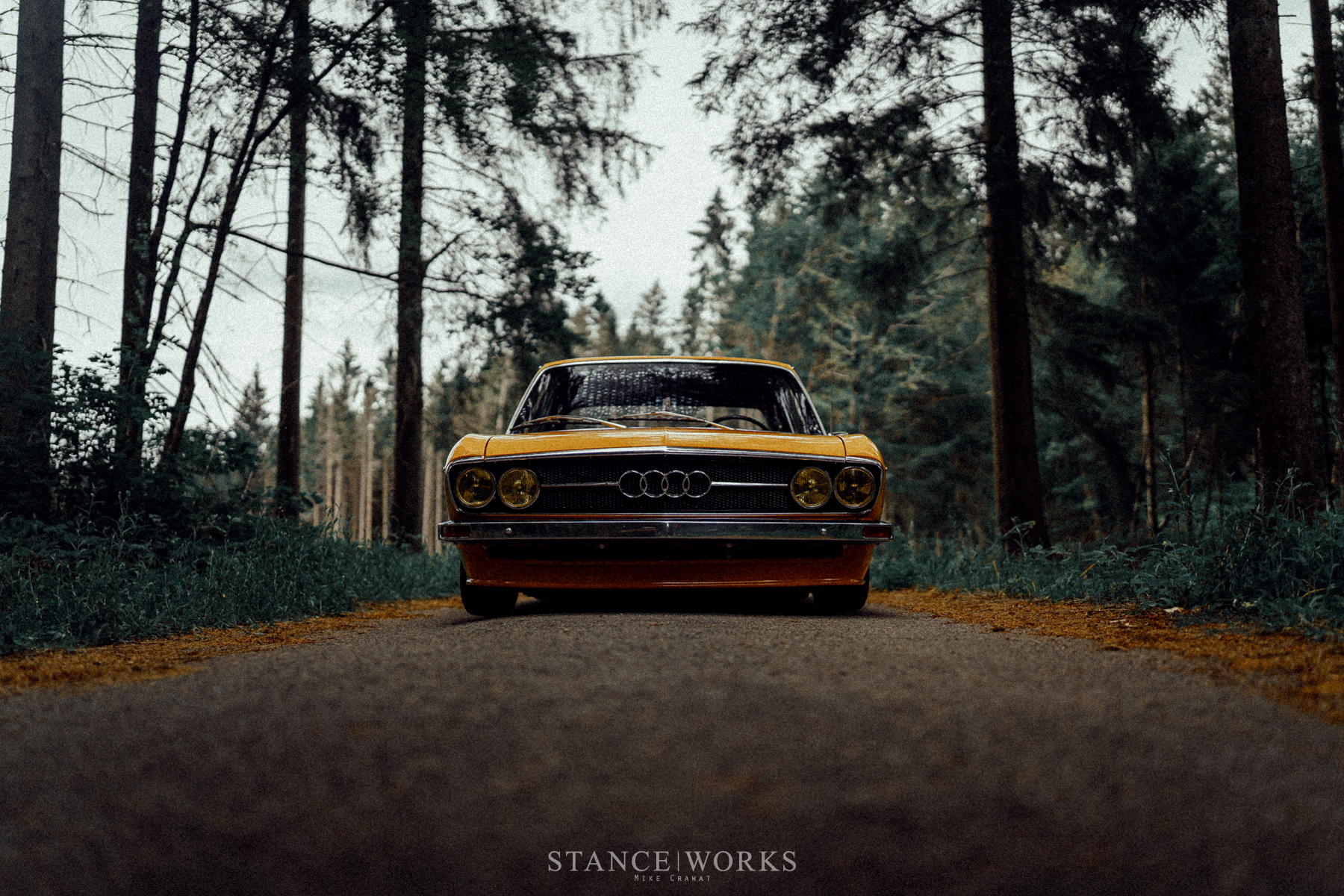 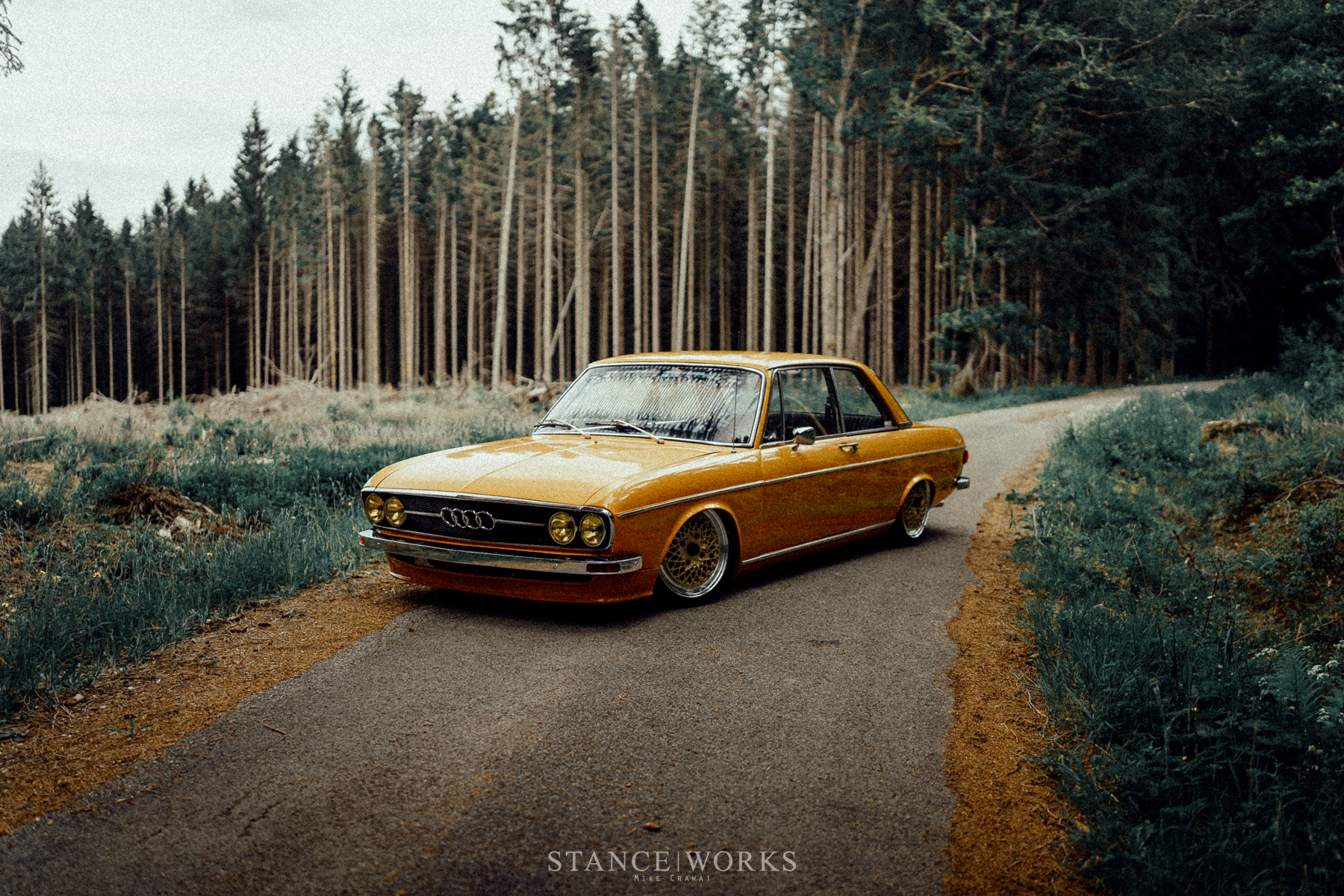 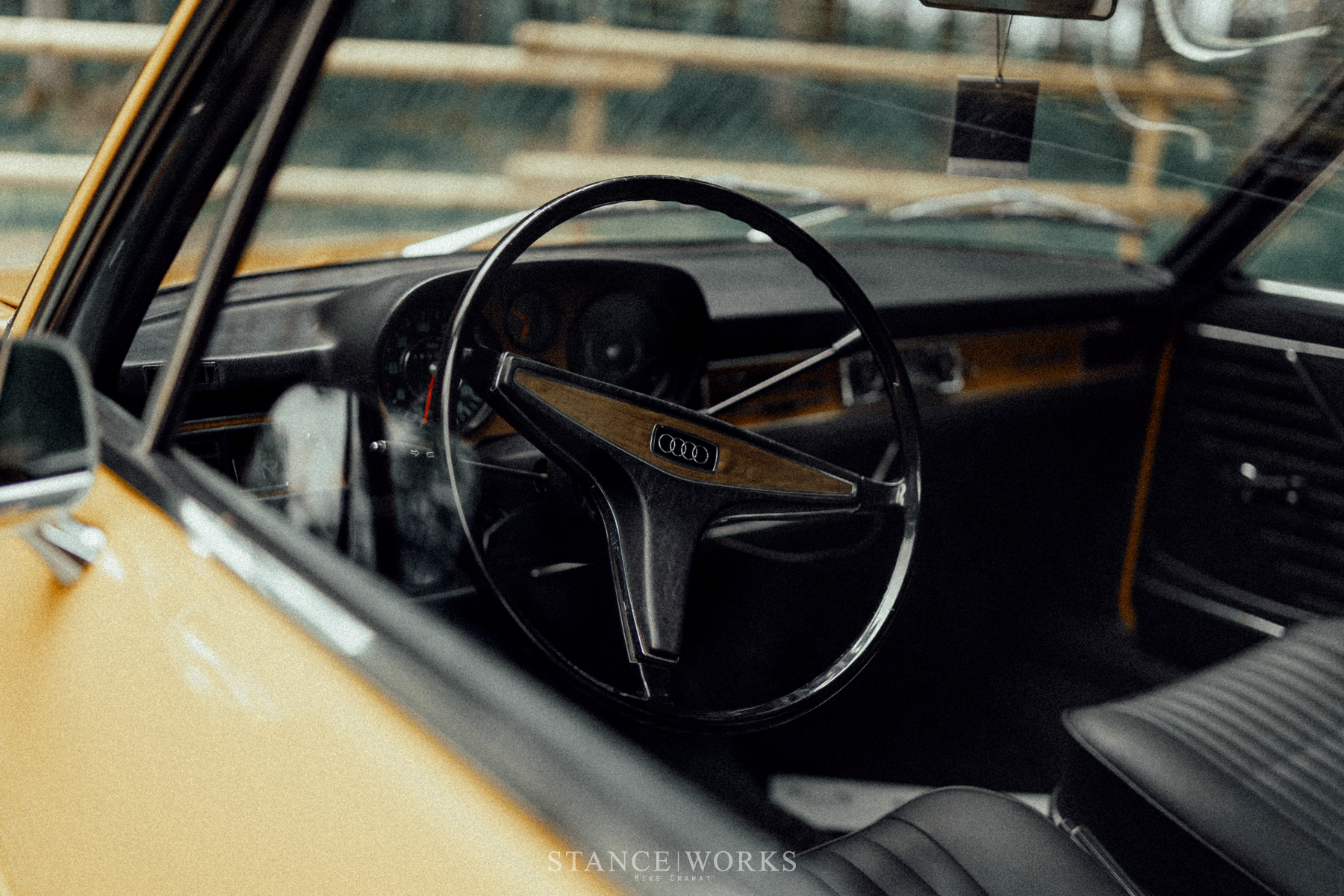 There's plenty yet to do still, but these days, David simply enjoys driving the car. When weather permits, it sees daily duty to and from work, and makes for enjoyable road trips when speed isn't of the essence. That works, if you ask us: after all, what good is a car that looks like this if people can't see it cruise by? 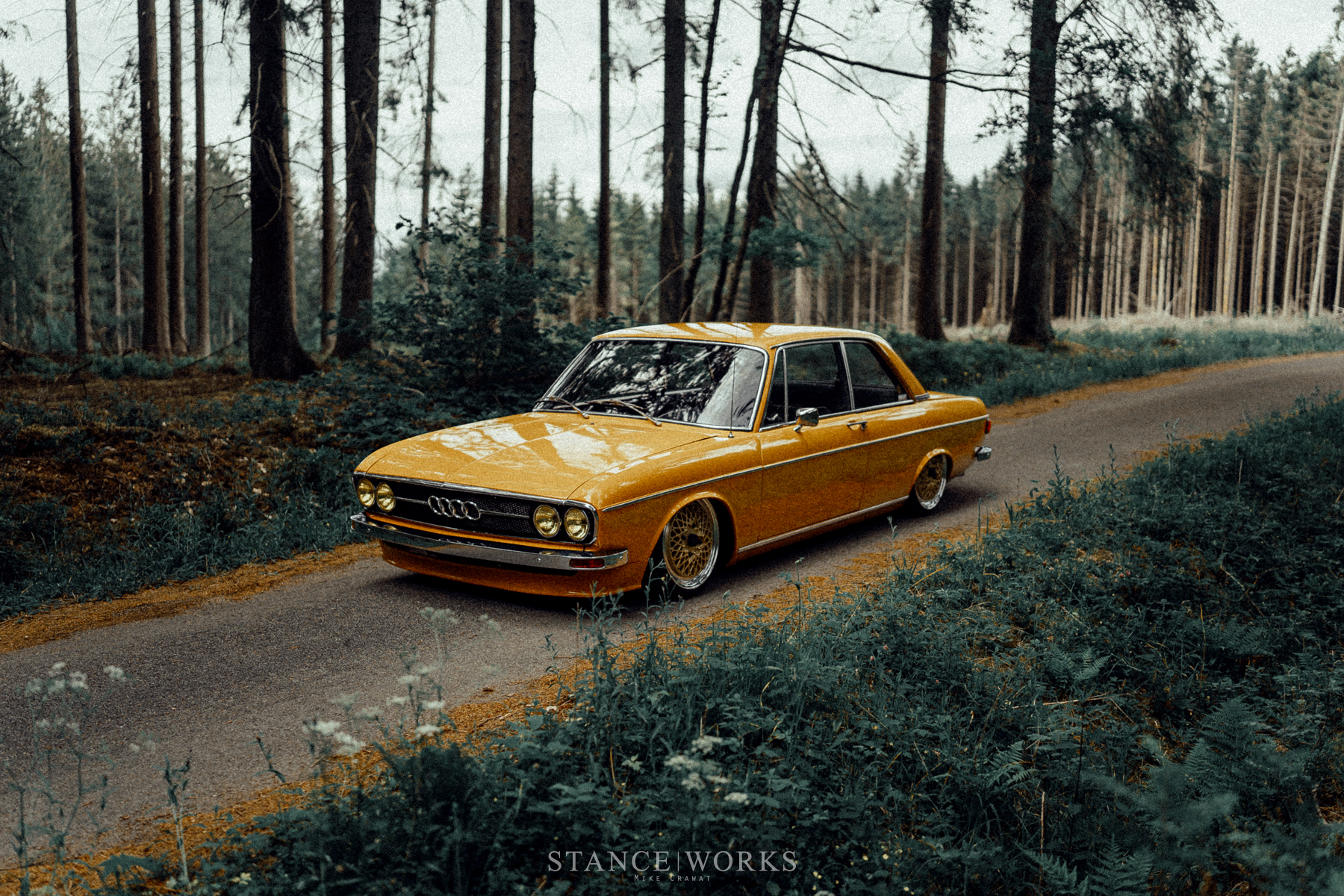