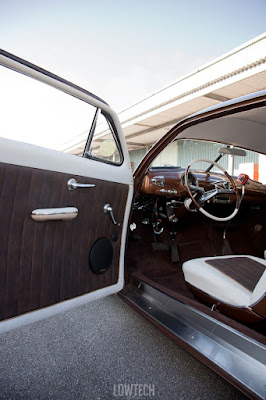 Many of us know that feeling: We just sold a car or saved some money and, all of a sudden, we are eagerly on the lookout for a new project. Usually, we don’t find that cool soon-to-be custom or future hot rod in the neighborhood or in the next town, so what do we do?

We go online. And there are magical places on the interwebs that make us car guys feel like a kid in a candy store. Classifieds pages, forums and auction sites are loaded with colorful, seductive pictures of great looking rides for sale. And they’re all full of promises: Ran when parked, only needs little TLC, awesome driver, and so on.

Back in 2007, Ramon was in that very situation. He’s a motorcycle guy and has built several custom Harleys together with his buddy Carmelo under the flag of their company Hot Cycle Pilots. Several of their builds got featured in international motorcycle magazines but Ramon felt it was time for something new. He not just wanted something with two extra wheels, he knew it had to be a 1949 or 1950 Ford Two-Door Sedan. 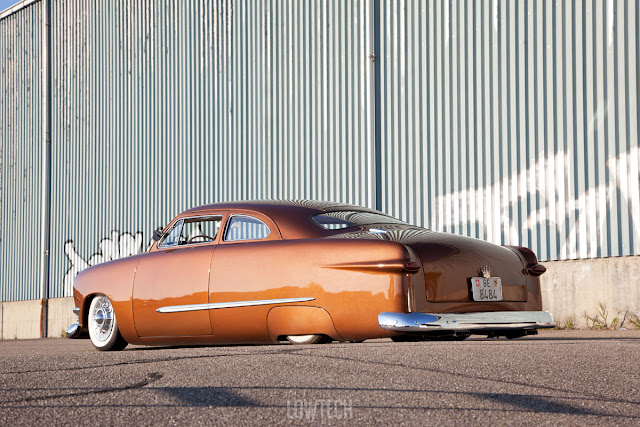 »The Shoebox Ford has been my dream car for as long as I can think«, he tells us. »And the Two-Door Sedan in particular is the best candidate for a chopped Custom Shoebox.« So the search began. It took him more than half a year until Ramon finally came across a 1950 Shoebox that suited his taste. The car was already chopped, bagged and sported a primer paintjob. With its black steelies and wide whites, it definitely was a badass looking shoebox. Exactly what Ramon was after. The description in the ad also sounded great but Ramon was still cautious so he called the seller, a Shop in Southern California. They confirmed that the Shoebox was a great driver in very nice shape and it was ready to go. 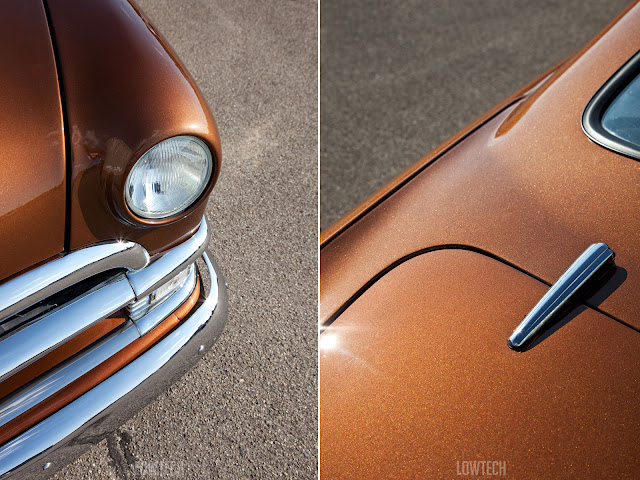 A good friend of Ramon is an airline pilot and with his help, they arranged to get the Shoebox from California to Switzerland as air cargo. So, in early 2008 and only after a few days of waiting, the plane arrived in Zurich with Ramon’s shoebox on board. He couldn’t wait to take a closer look at his new acquisition and wanted to find out what it was all about with those driver qualities. Of course, Ramon knew that pictures do lie – as well as sellers – but he was hardly prepared for what he was about to discover within the first few hours of inspecting the Shoebox back home at his shop. 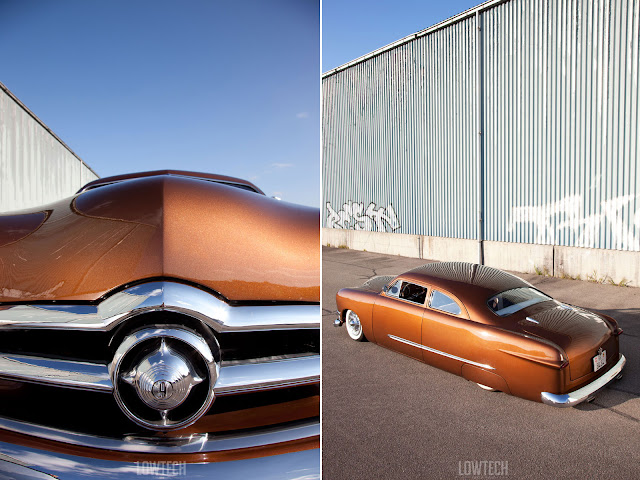 »The car was a mess. The body was looking okay from a distance but it was completely hacked up. They had cut out the inner wheel wells, it had several rusted areas and the floors were gone.« Underneath things weren’t looking better: The frame had been cut and notched but with crude weldings and the airride didn’t really work. Everything was hitting somewhere. The factory inline six engine was somewhat running but the car couldn’t move under its own power. 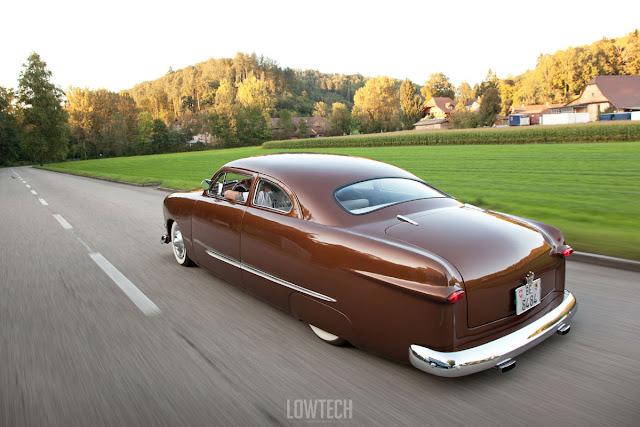 Ramon was about to call the dumpster and call it bad luck. But somehow he didn’t want to give up and after nights discussing with his shop buddy Thomas Kläy, talking about the pro’s and con’s and fueled by one or another bottle of beer, he finally came with the all important decision: Fuck it, let’s build it! 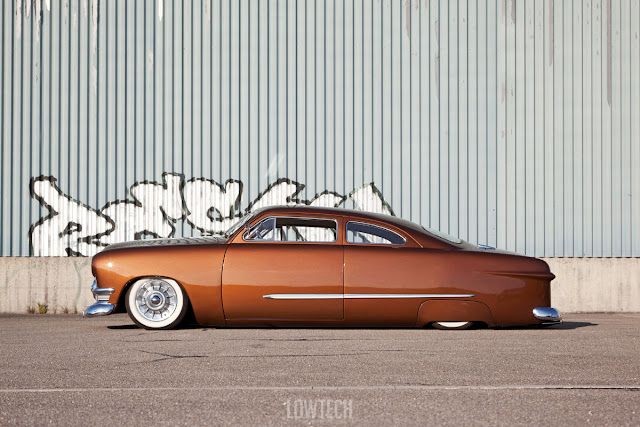 To be honest, it wasn’t just beer that led to the rebuild of the Shoebox. The pièce de résistance was the chopped top: »Those guys fucked up everything but they totally nailed the chop on this car. That roofline really makes the car and it was one of the main reasons why I had decided to buy it.« So, from here on, Ramon redid everything on the Shoebox – except for the chop. 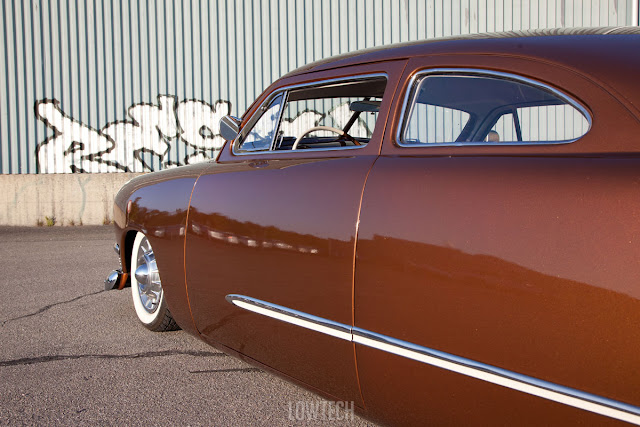 And by everything, we mean everything. He started from the bottom up by replacing the cut up frame with a newer frame he completely rebuilt mechanically and cosmetically. An air ride system by Ridetech Air Ride Technologies was installed in order to achieve the correct stance which is, according to Ramon, as low as you can go. 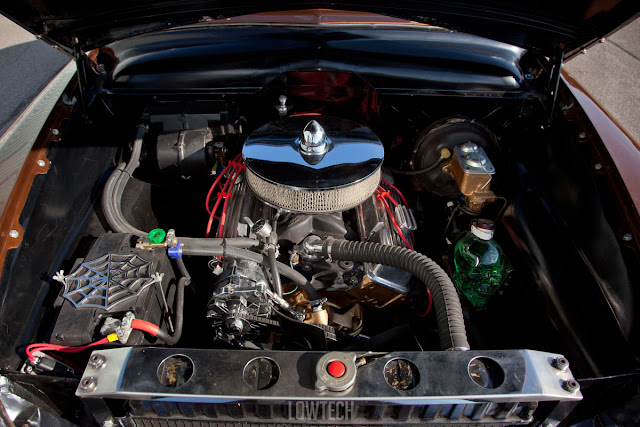 And the tired inline six engine had to go as well as the original three-speed tranny. Both was replaced with the trusty 350/350 combo by GM. Ramon and Thomas continued by reconstructing the missing inner wheel wells and while they were at it, they also installed a new firewall as the original one was cut up badly. 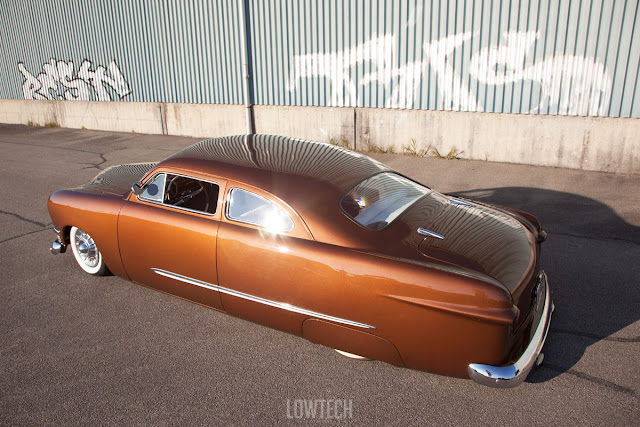 The body was slowly but steadily taking shape as the lower few inches had to be rebuilt due to rust and/or bondo issues. And now that it really didn’t matter anyway, they also decided to channel the body three inches over the frame. 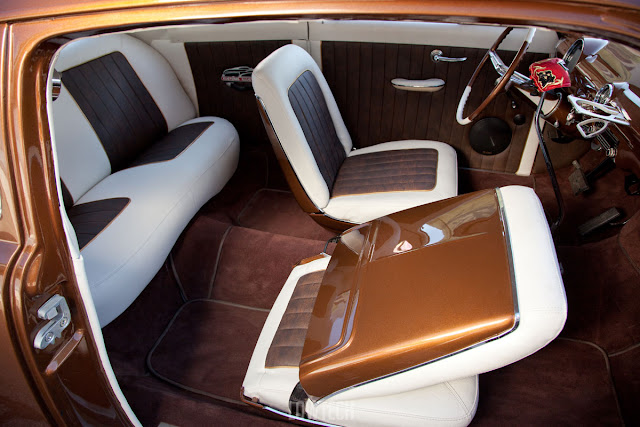 This seemingly endless project took place over a span of six years with Ramon working on the car almost every Saturday. Of course, he was able to rely on some much-appreciated help especially when it came to bodywork or interior. 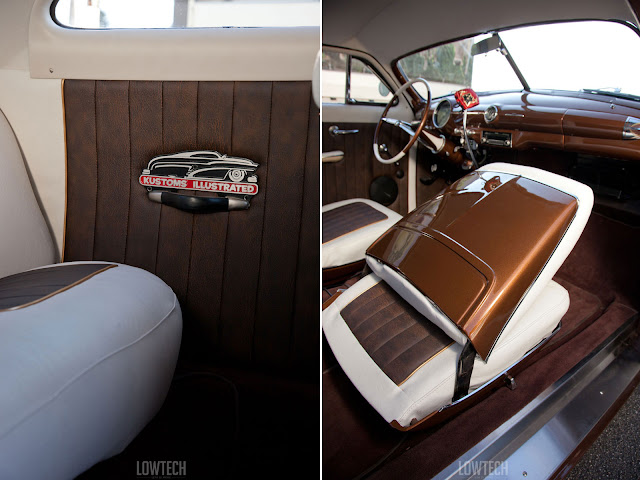 The upholstery job, for example, was handled by the specialists of Autosattlerei Rey and they did an outstanding job covering the 1965 Plymouth Barracuda bucket seats as well as the rear bench. We also dig the rear armrests adorned with license plate toppers from Kustoms Illustrated Magazine. 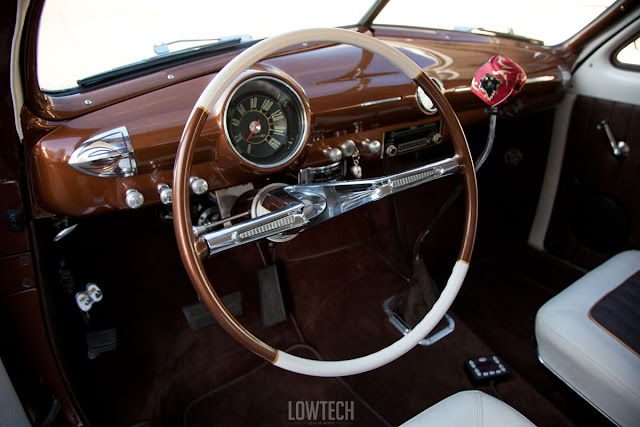 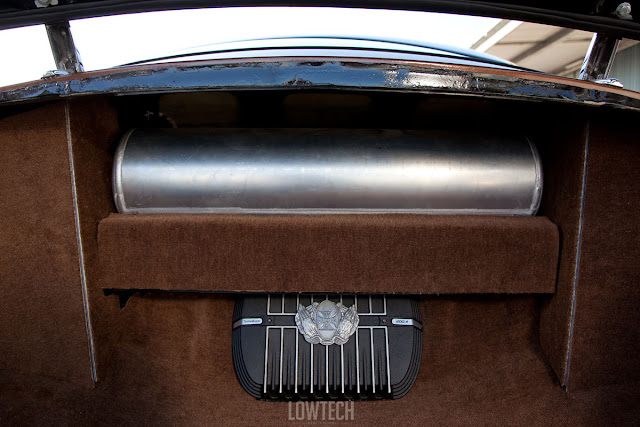 The upholstery shop also took care of the headliner and the carpet while Ramon was installing the air ride tank and compressor in the trunk together with a MacIntosh car stereo system. He also placed some hidden compartments where he can store all the little stuff usually cluttering the appearance of the trunk. 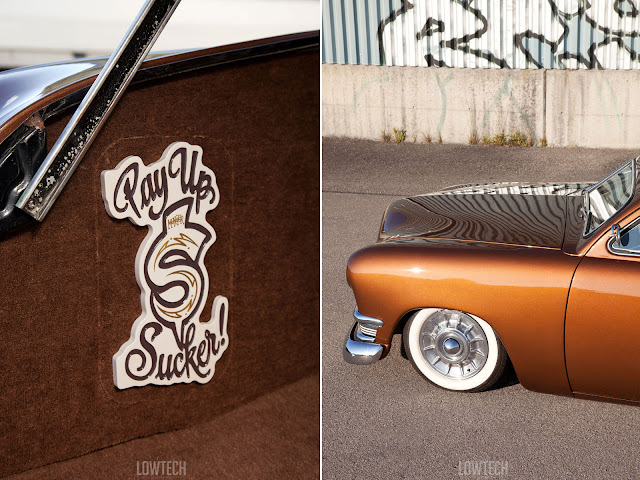 The access doors to those compartments received a pair of Pay Up Sucker logos designed and built by Herb of Monster Kustoms. Herb is an incredibly talented Swiss lowbrow artist, pinstriper, signpainter and just like Ramon belongs to the Niners Crew. 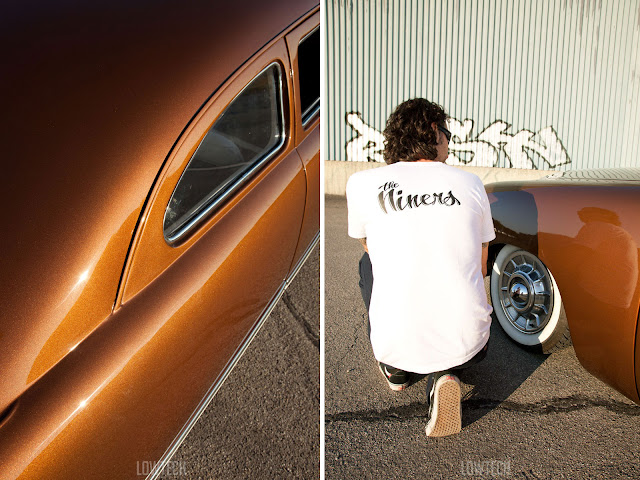 The Niners were founded in 2003 and are a close group of friends with a mutual interest in everything Kustom as well as building and riding motorcycles. Ramon is one of the Niners’ founders, with Danny Schneider being their most prominent member, building choppers under the name of his company Hard Nine Choppers. 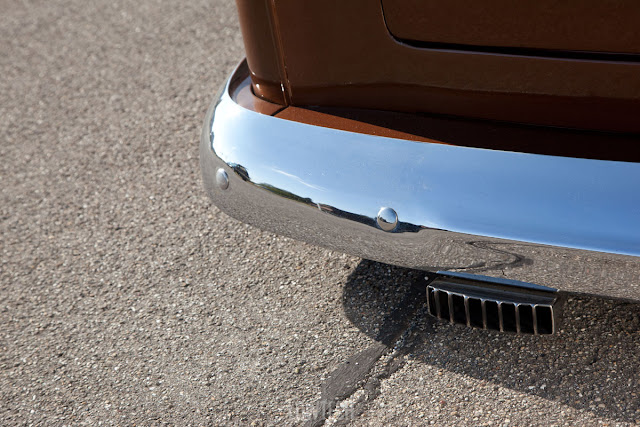 But let’s get back to the ‘box. Just like those cool looking logos, the influences of all the people involved are clearly visible in a lot of little touches, but Ramon also outdid himself by creating several never seen before detail solutions. The exhaust pipes are a small work of art as well as the rear license plate light that he combined with a crown-shaped belt buckle. 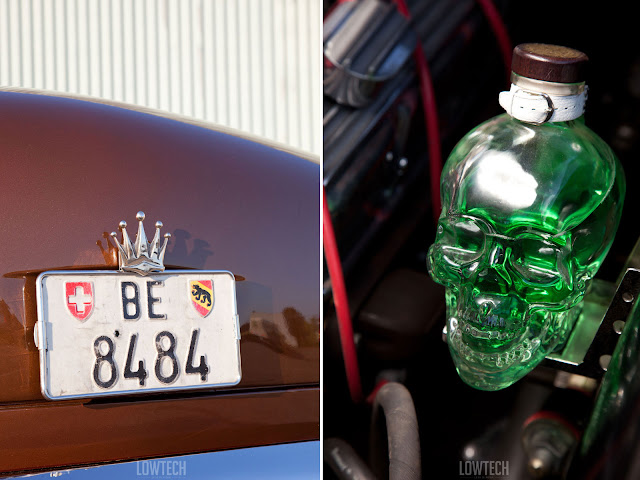 Or who would have thought that a Crystal Head vodka bottle can make you smile even without alcohol but instead turned into a windshield washer reservoir? 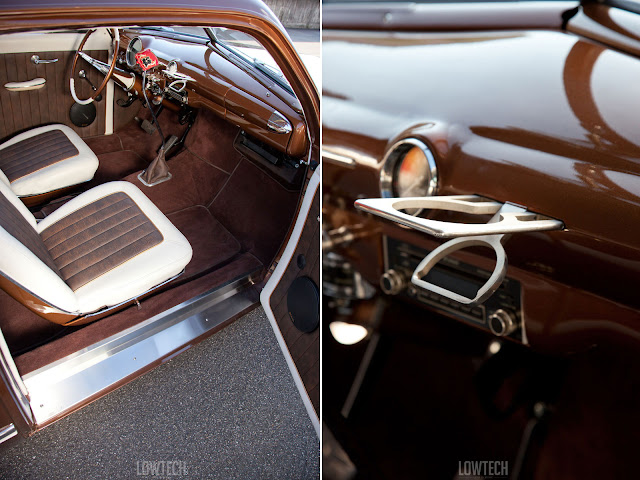 Maybe it’s Ramon’s roots as a motorcycle builder but he just has an eye for those details. And he still doesn’t get lost in them as all these twists and styles perfectly complement each other. 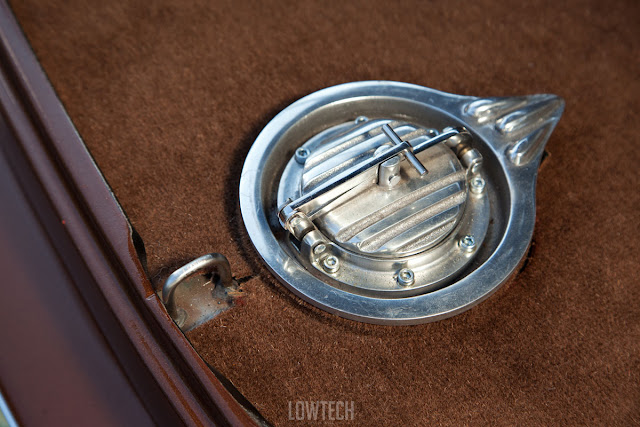 Especially since they’re all held together by the mile-deep Walnut Brown paint, masterfully applied by the aforementioned Herb of Monster Kustoms fame. 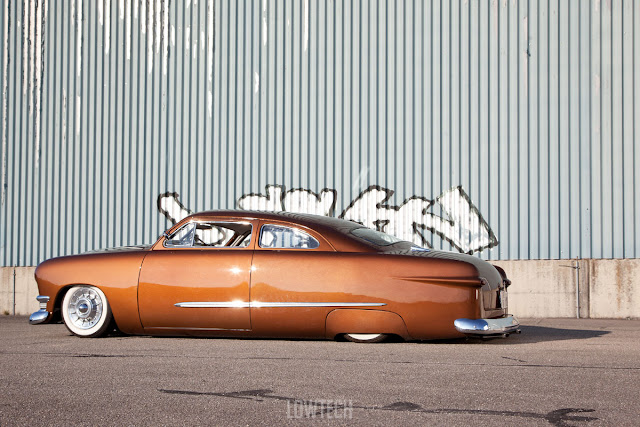 Today it’s hard to believe that this Shoebox would have almost ended up at the junkyard. But Ramon is happy it didn’t. And it was him who did everything he could to avoid this inglorious fate. Now that his dream kustom Shoebox is running and looking great while doing so, he’s starting to feel a little bit bored on those lazy Saturdays – but probably not for too long. There isn’t another Ford in his future, but a nice old Panhead Harley is waiting for a new life. 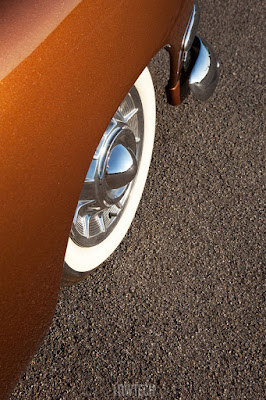