There it was, parked under a tree. Three years of rain, snow, leaves, and dirt shrouded what was once a beautiful example of a 1973 Mercedes Benz 450SE, but instead, it sat with 3 inches of standing water inside of it, along with an abundance of mold and resident spiders, living lavishly by most measures. "All it needs is a fuel pump," Jose Torres was told by his brother in law, the second owner of the car, feeding a line familiar to Craigslist conquistadors like you and I. Surprisingly, though, it was true. After being gifted the car in exchange for a helping hand in moving, Jose had a Mercedes to call his own, and with just a fuel pump, the soggy car breathed a new breath of life. From that moment, it was full steam ahead to build a car he imagined he'd never get to own. 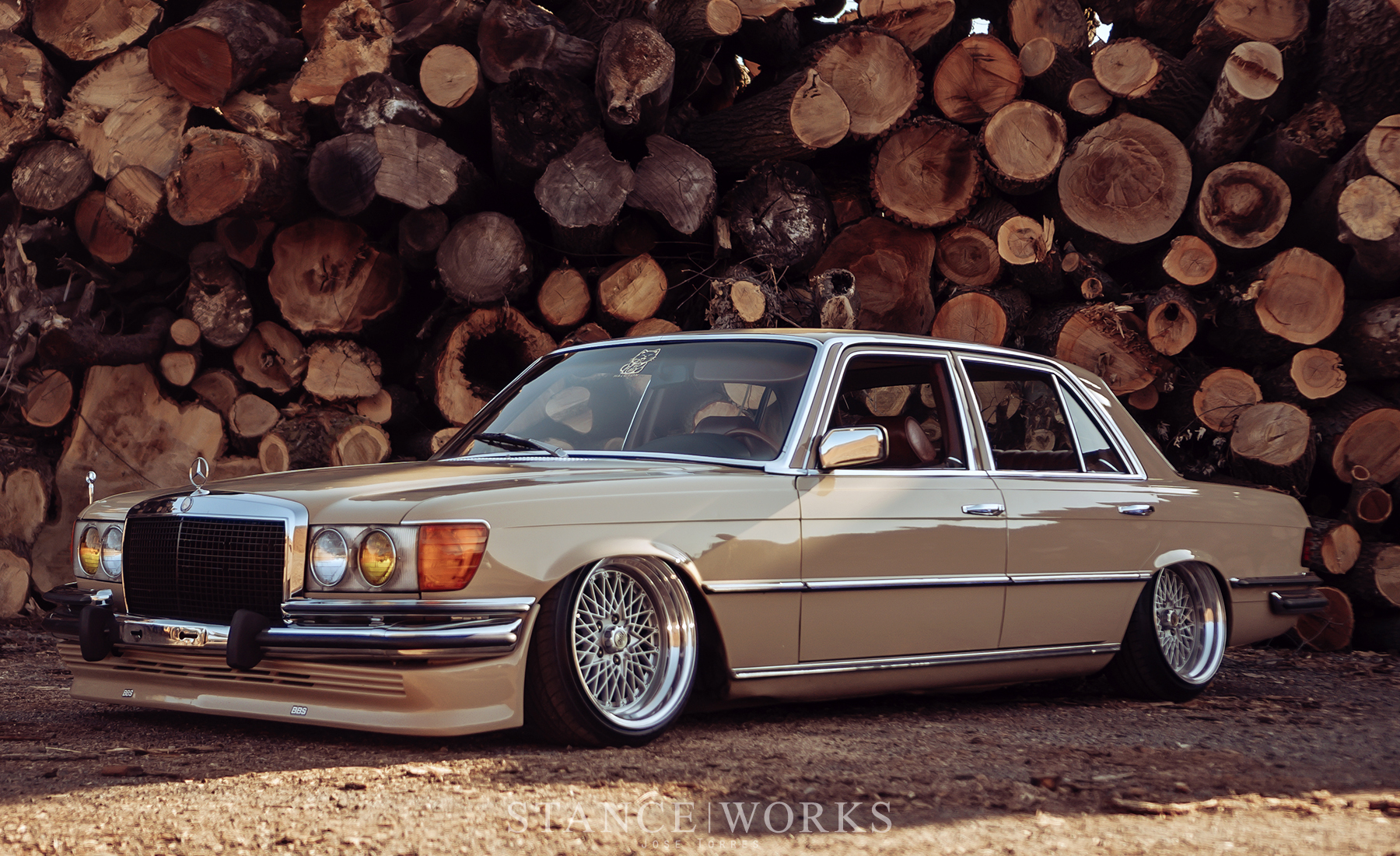 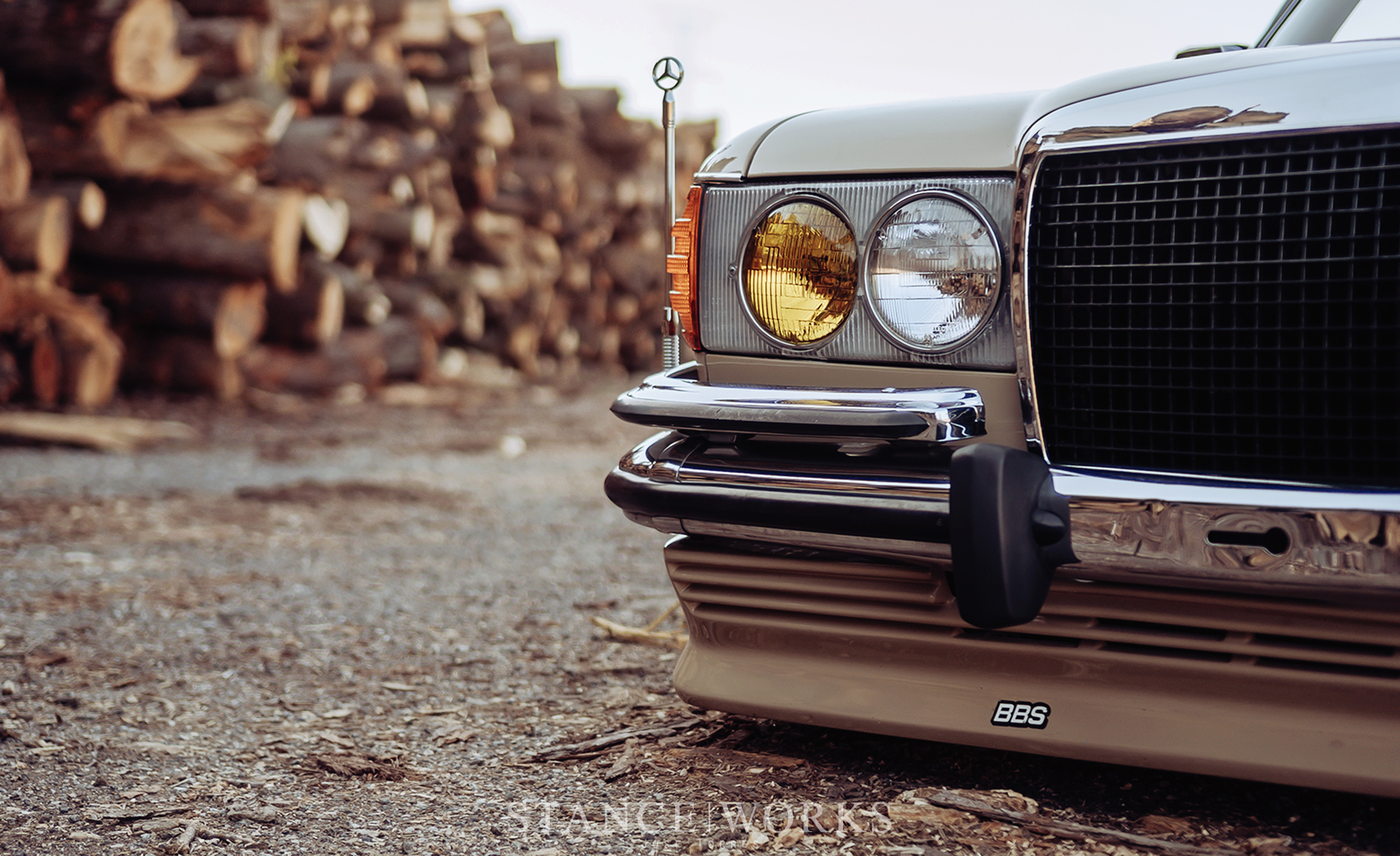 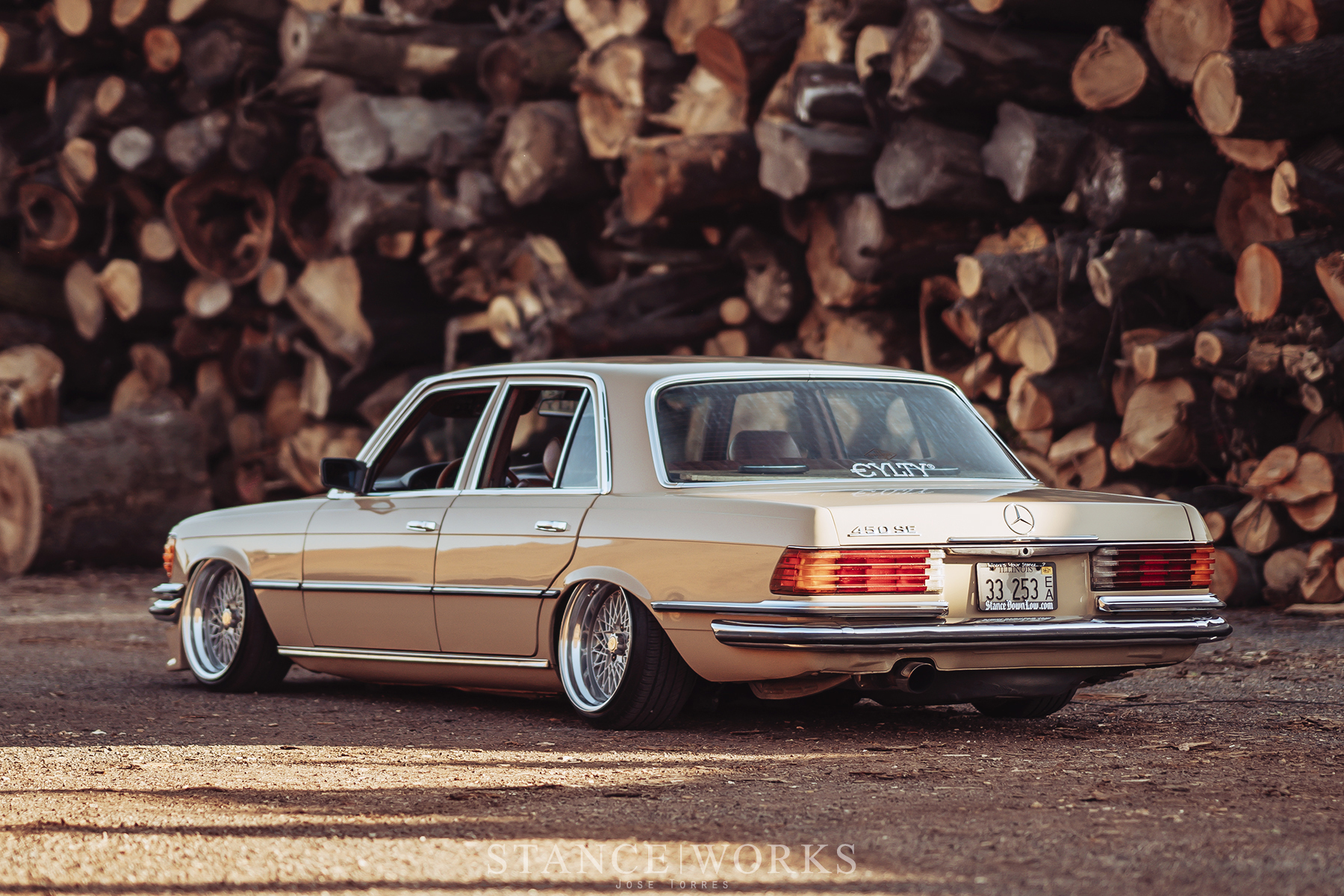 Bringing the car back to "life" may have been just a fuel pump; however, a lot more was needed to make it roadworthy.  Jose and a friend spent several hours just trying to un-seize the brakes and bearings to get the wheels to roll, for example, and it was a trailer that provided movement for the "first drive home." Hours and hours of cleanup and effort were poured into the coupe in an effort to save what could be, and what couldn't was plagued by the task of finding replacement parts, an aspect of the build Jose defines as the most difficult of all. 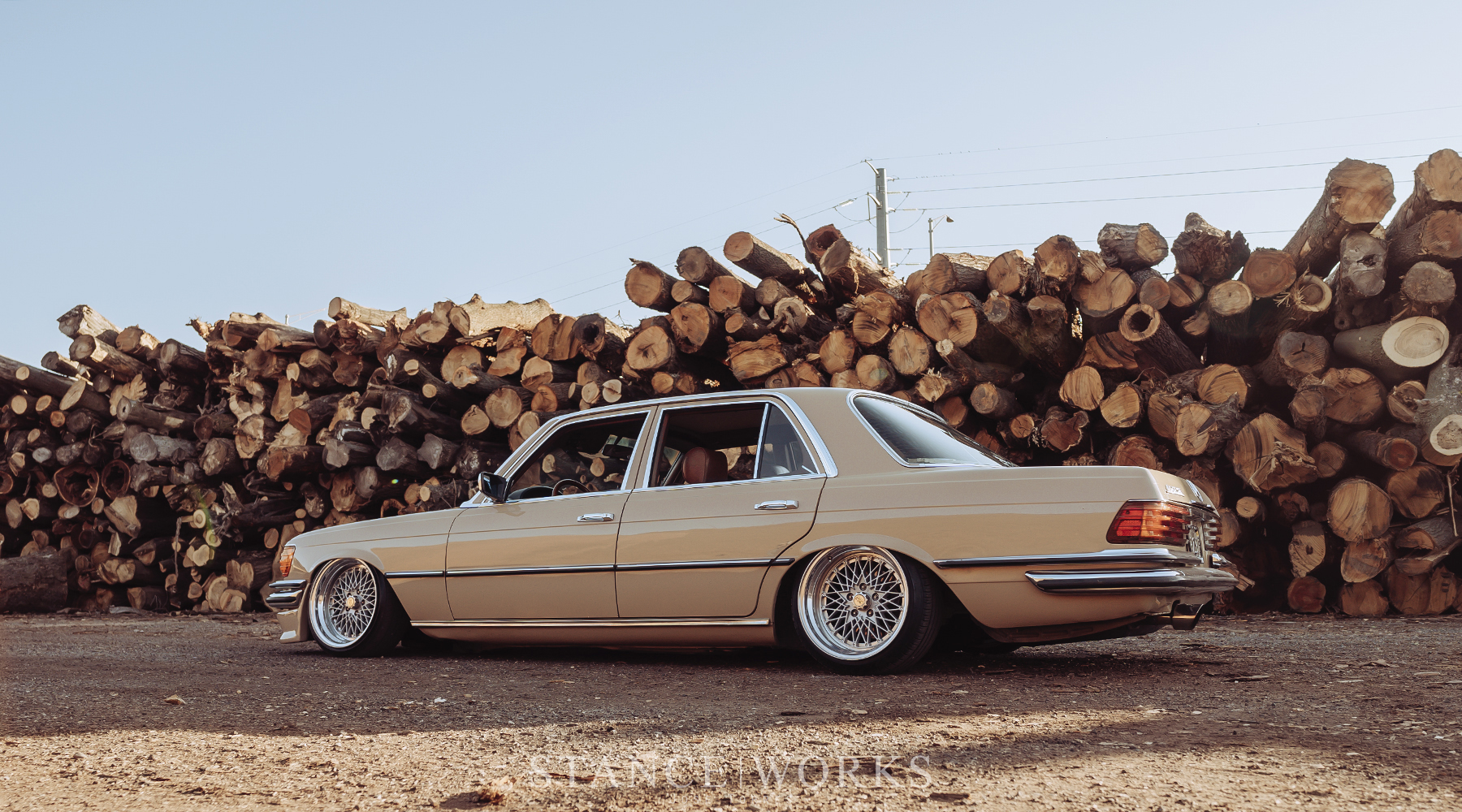 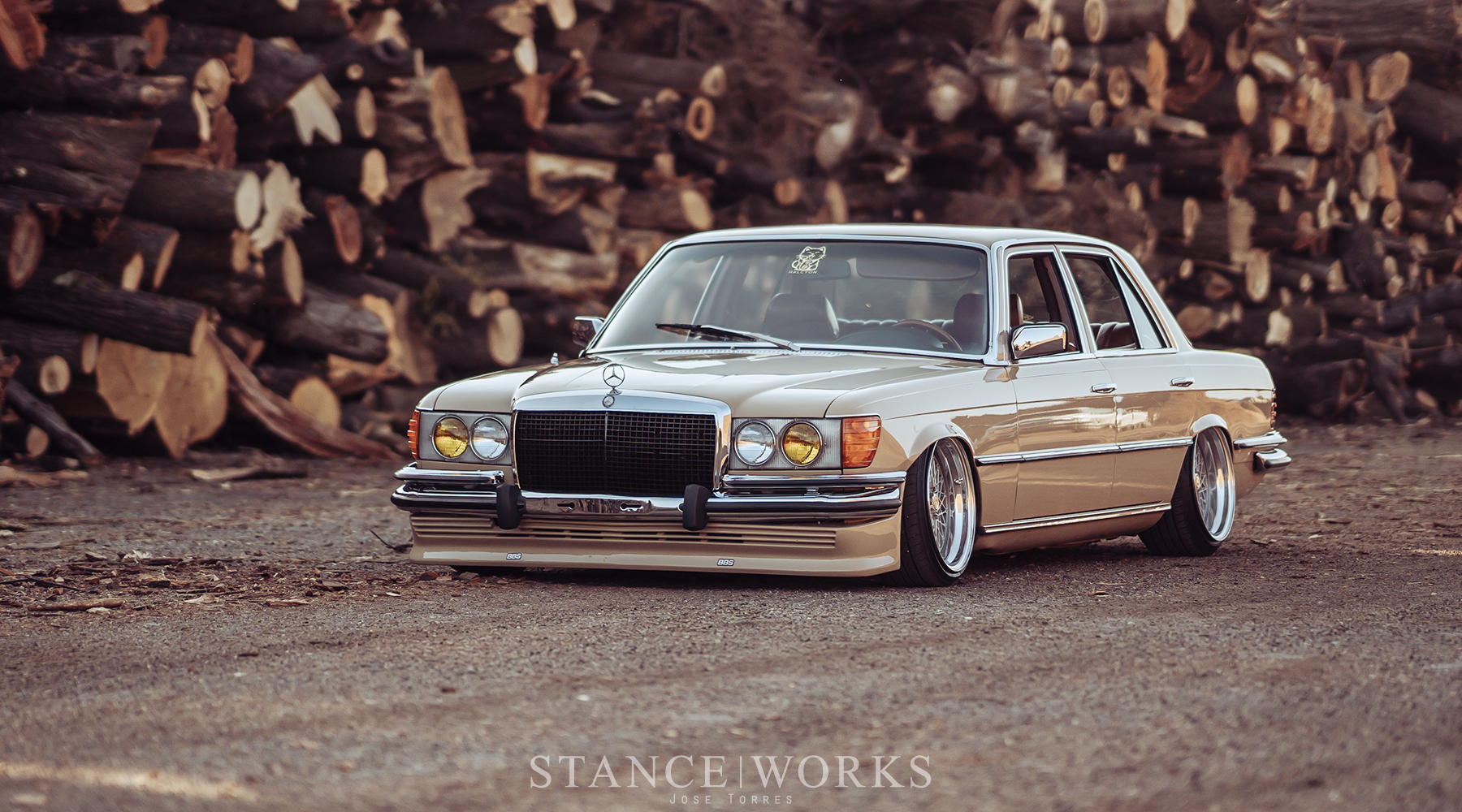 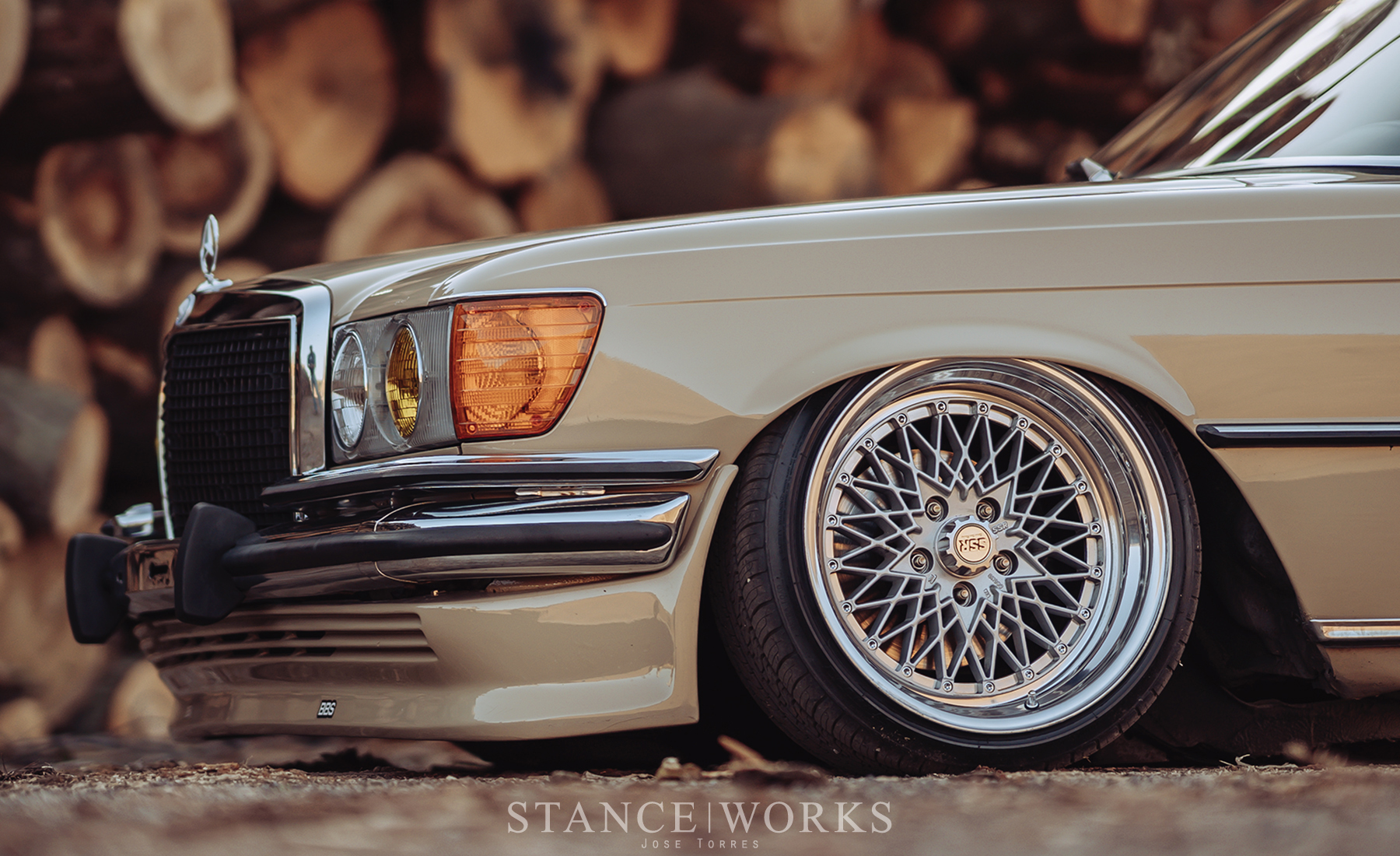 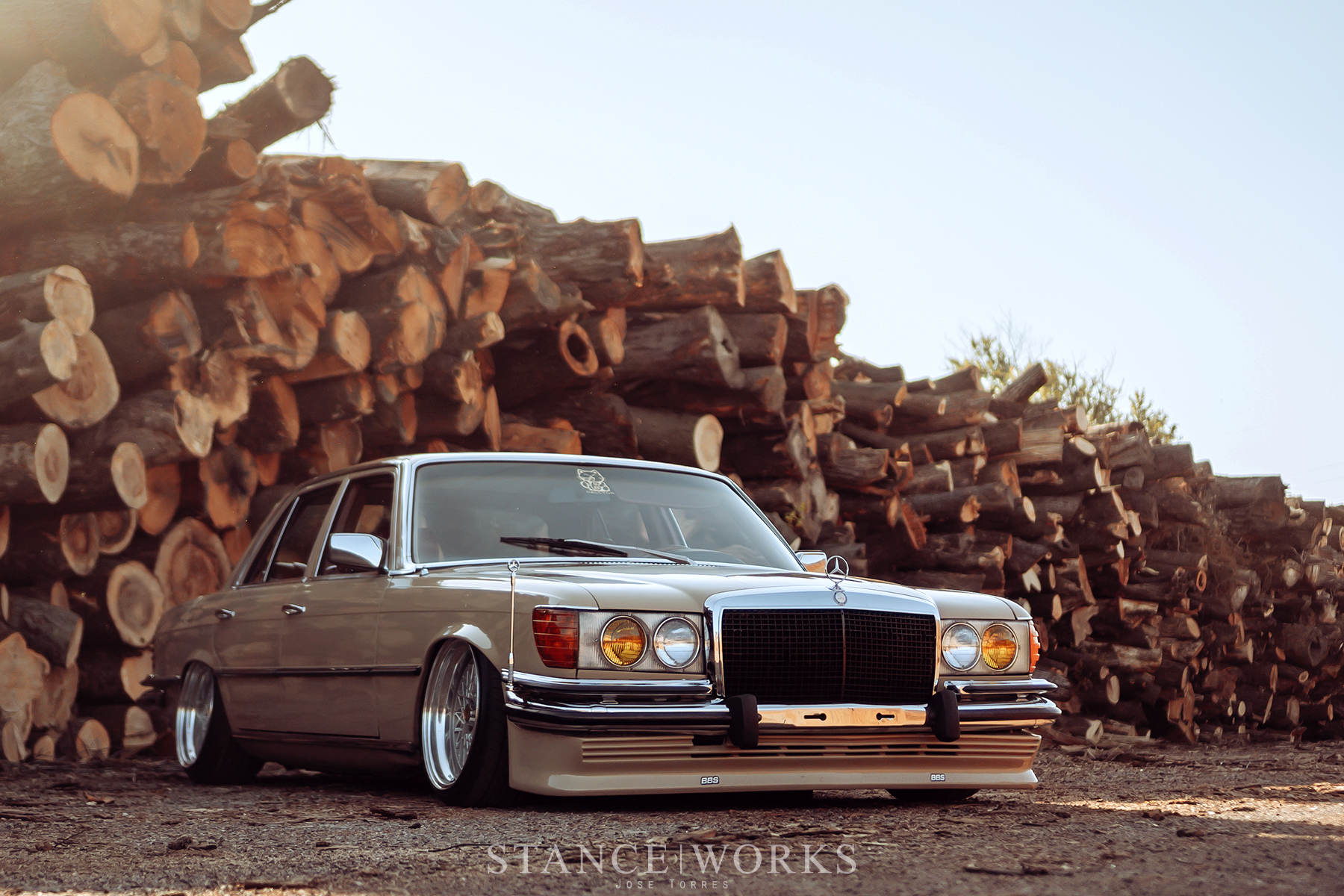 Once on the road, though, and with a new lease on life, Jose was quick to heat the springs for some added style points, a decision that short lived... within a couple of weeks, Jose had pulled the trigger and ordered a complete air ride system from Bag Riders, consisting of a Air Lift Performance 3P management system, Air Lift bags, and bracketry from Twisted Images in California. Jose's friends at Sammy's Tire took delivery of the parts and the car, and got to work doing what they do best, installing all of the suspension components to yield a working system. 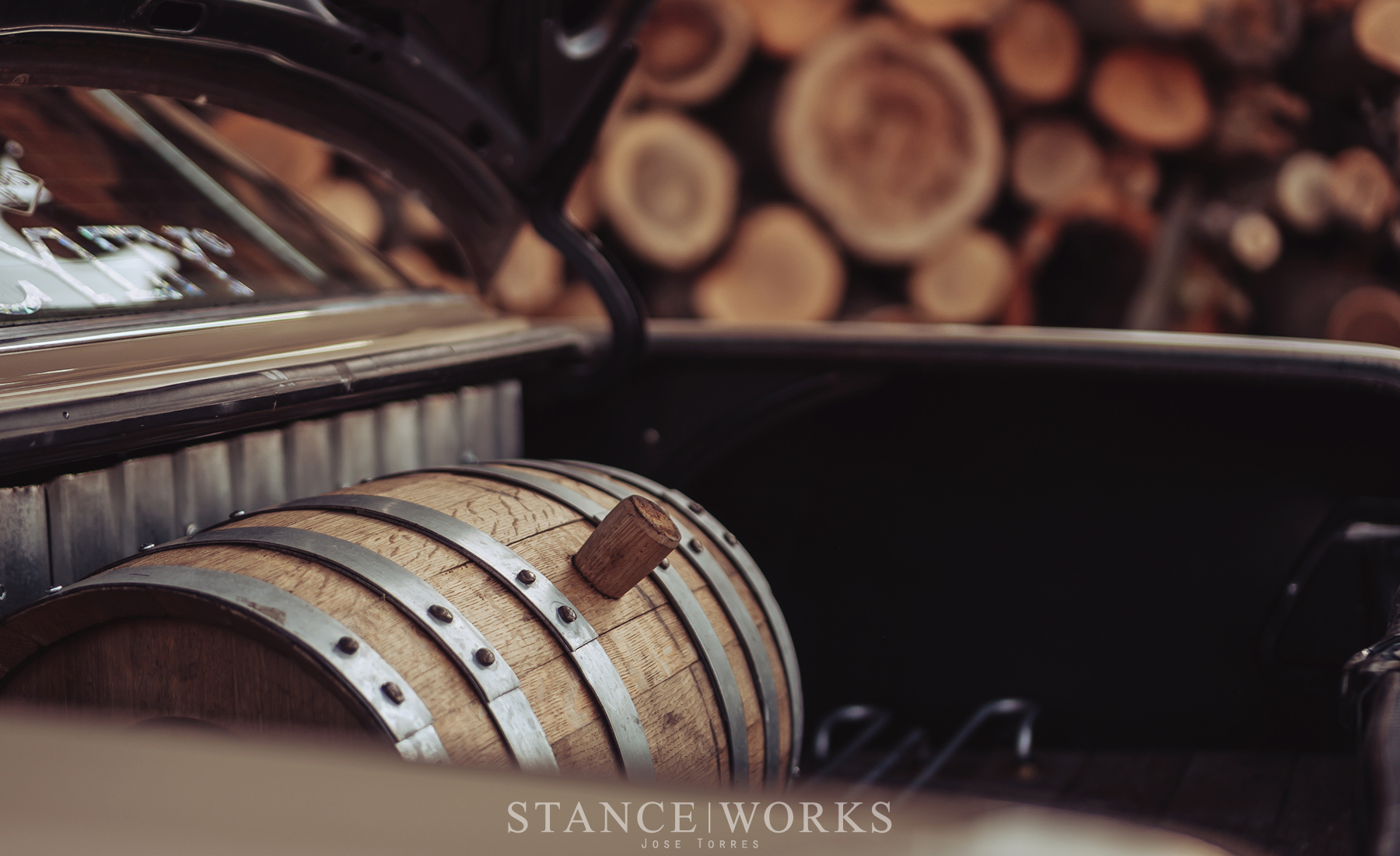 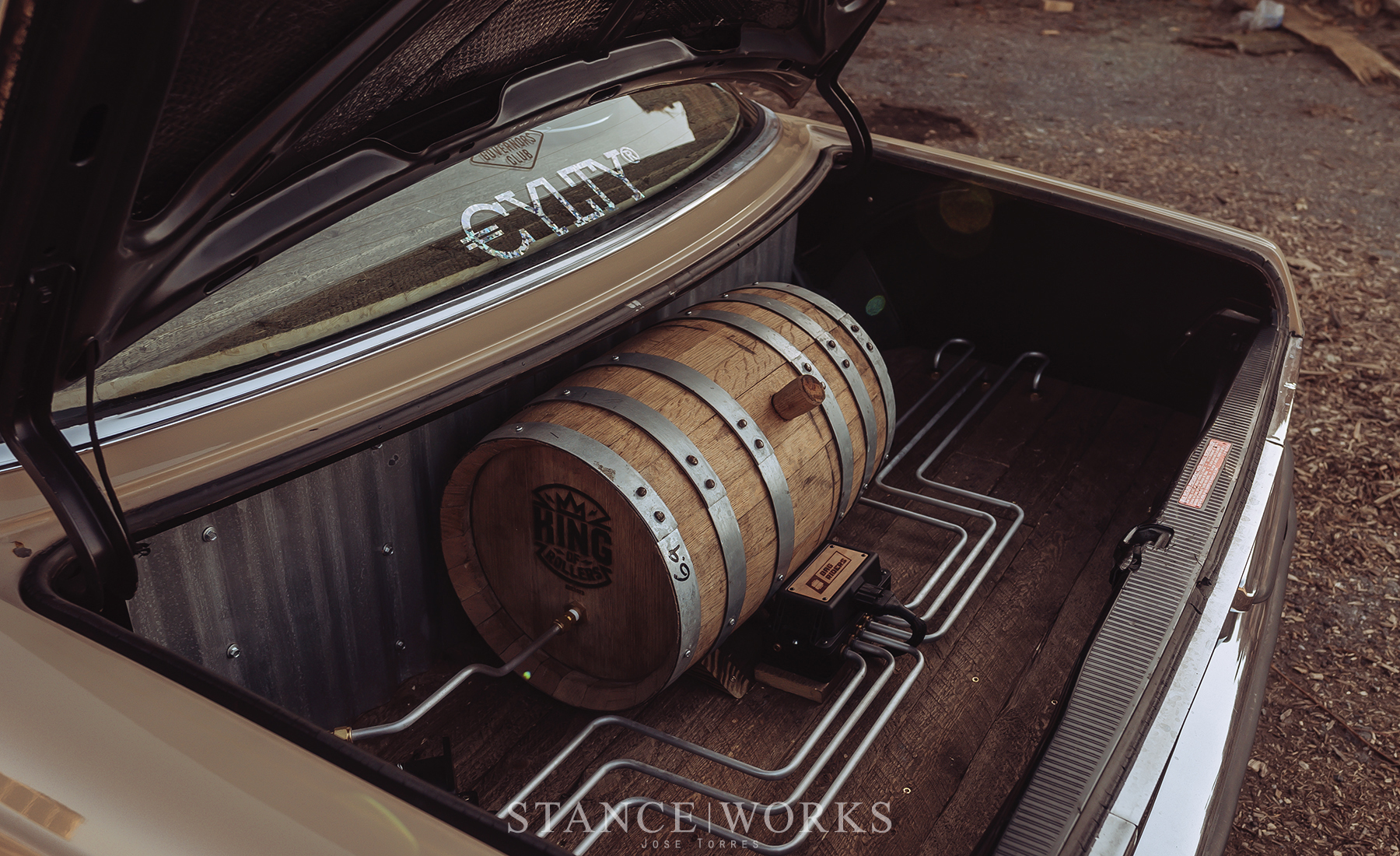 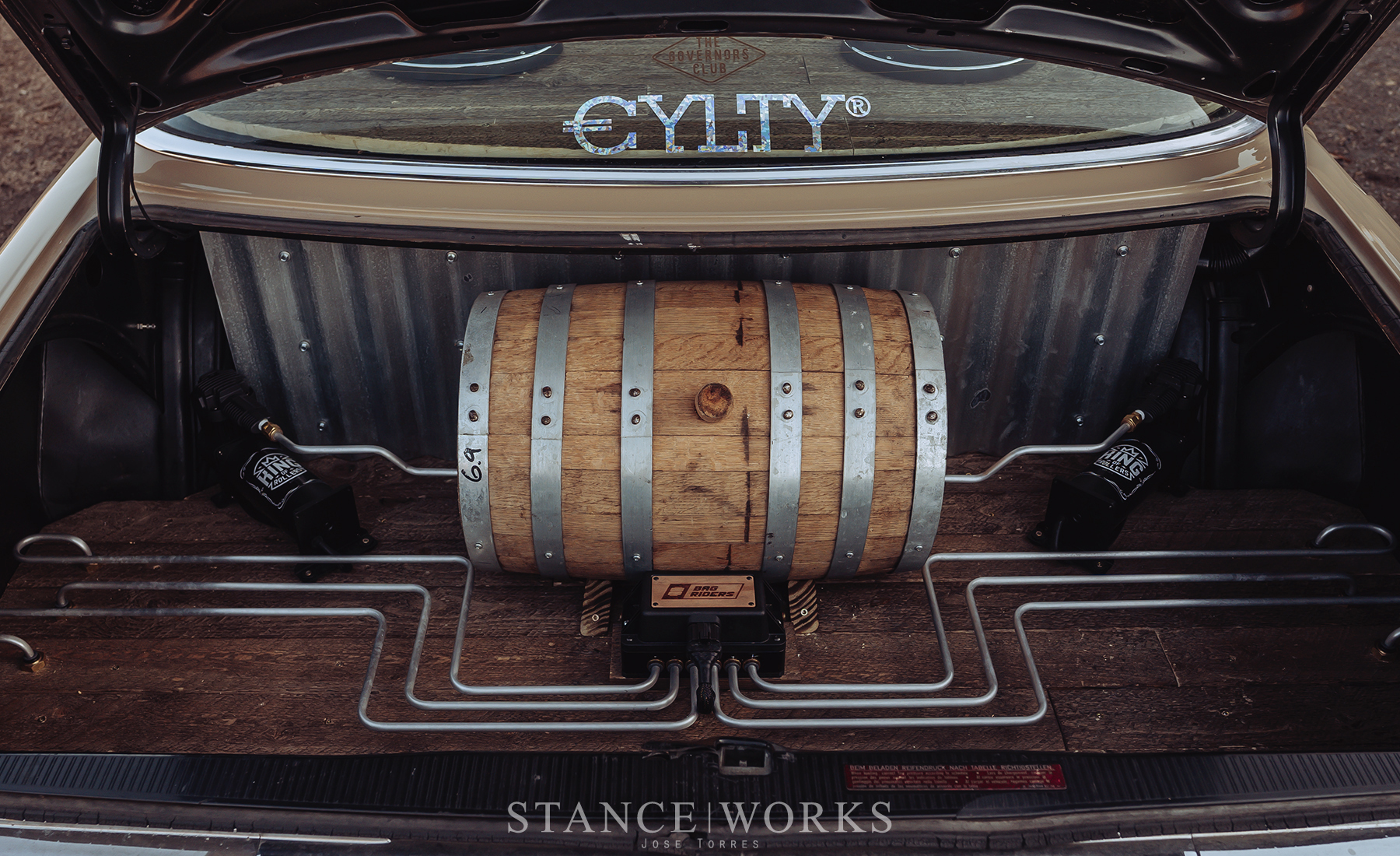 Trailing that, Jose enlisted the help of his friend Jason to build an astounding trunk air install, which uses an old wooden barrel as the tank and centerpiece. Hardline work traces throughout the trunk, with the Air Lift Performance manifold sitting front and center. A wooden floor finishes out the look, making for an installation that is as impressive as they come. 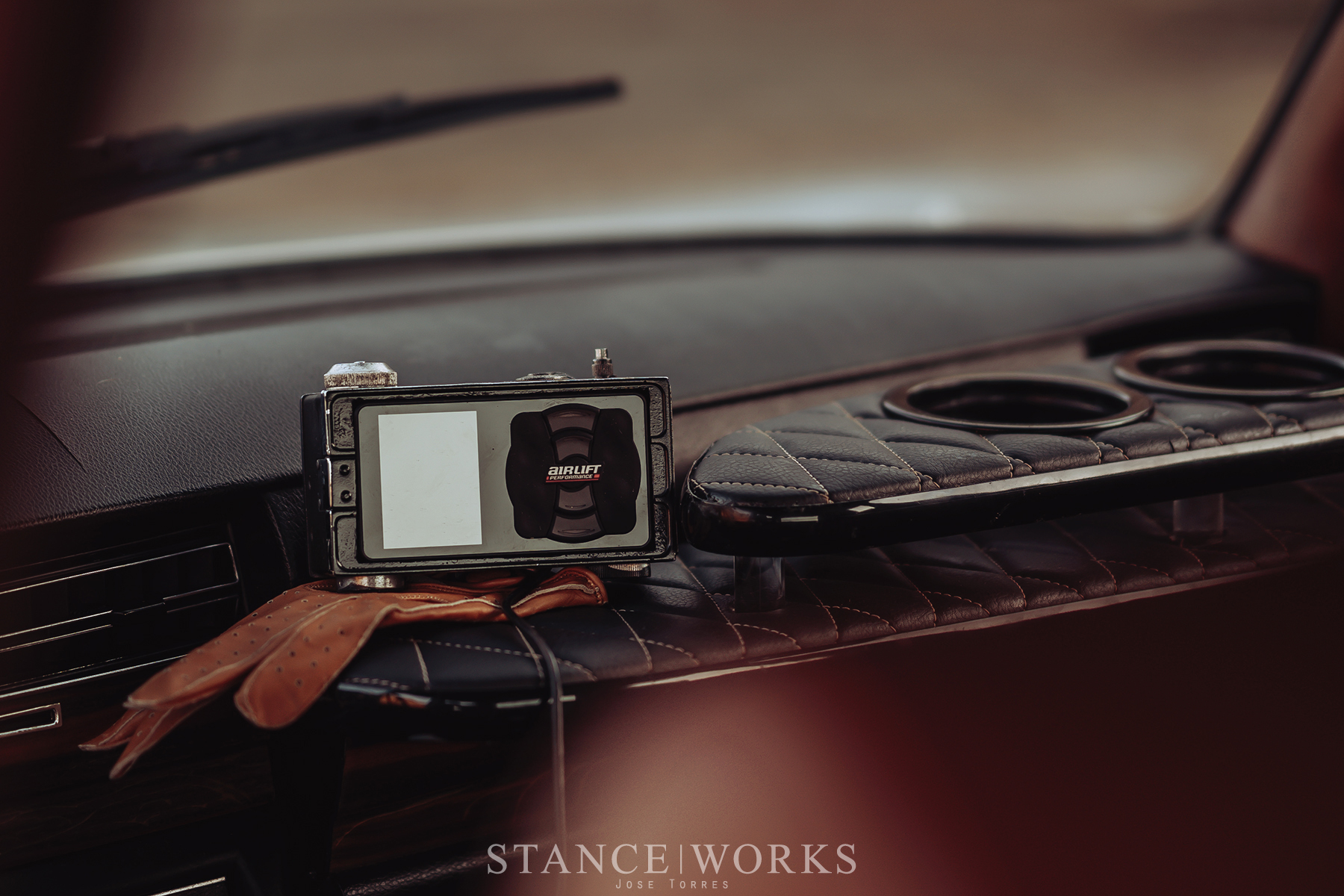 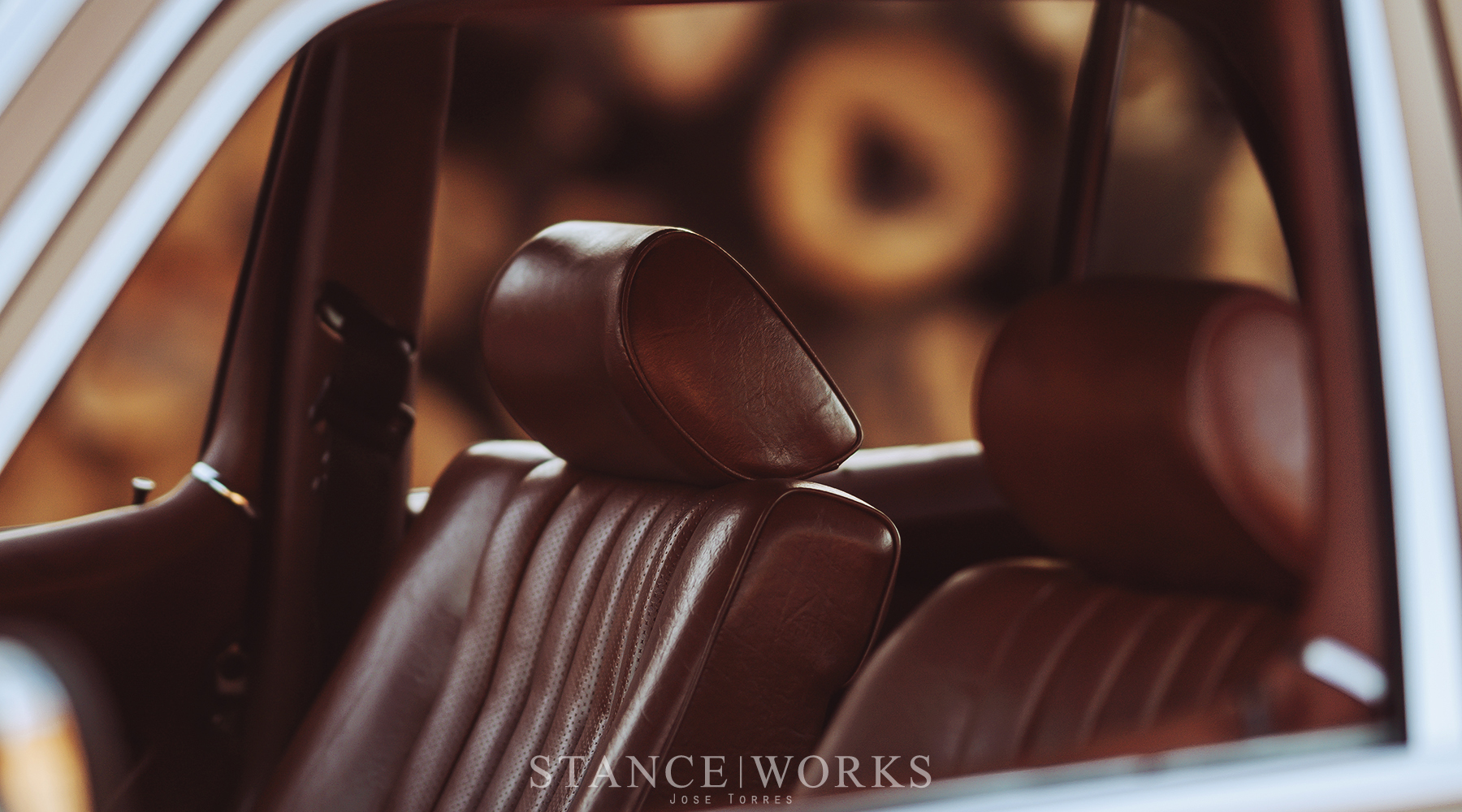 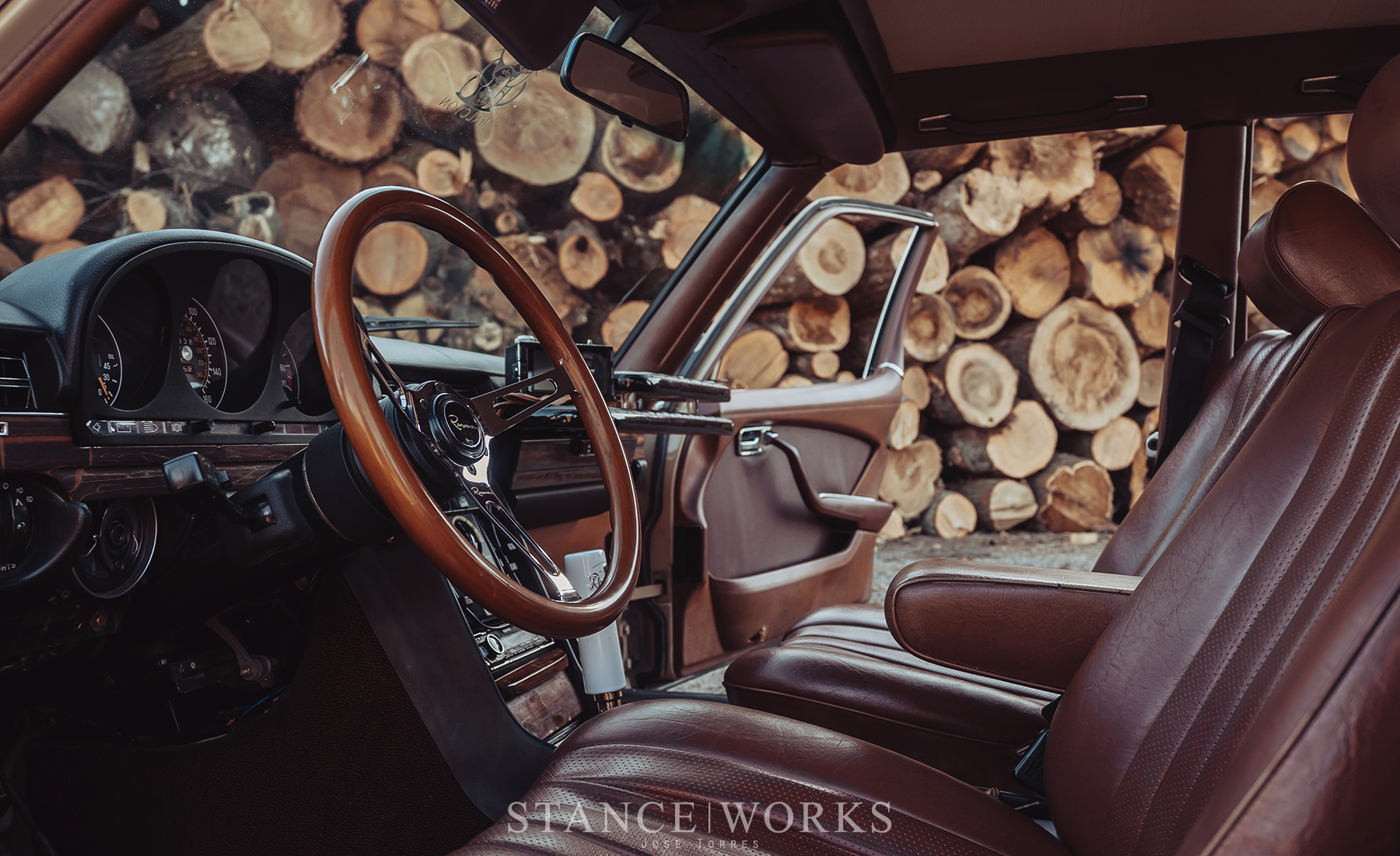 The colors embedded within the grain of the wood flow into the 450SE's interior, which took an incredible amount of work to clean. Most components were cleaned, washed, and restored, while the seats themselves were replaced entirely, and dyed to match. The Air Lift 3P controller sits housed in a vintage camera perched upon the dashboard, fully encapsulating the '70s feel of the car as a whole. 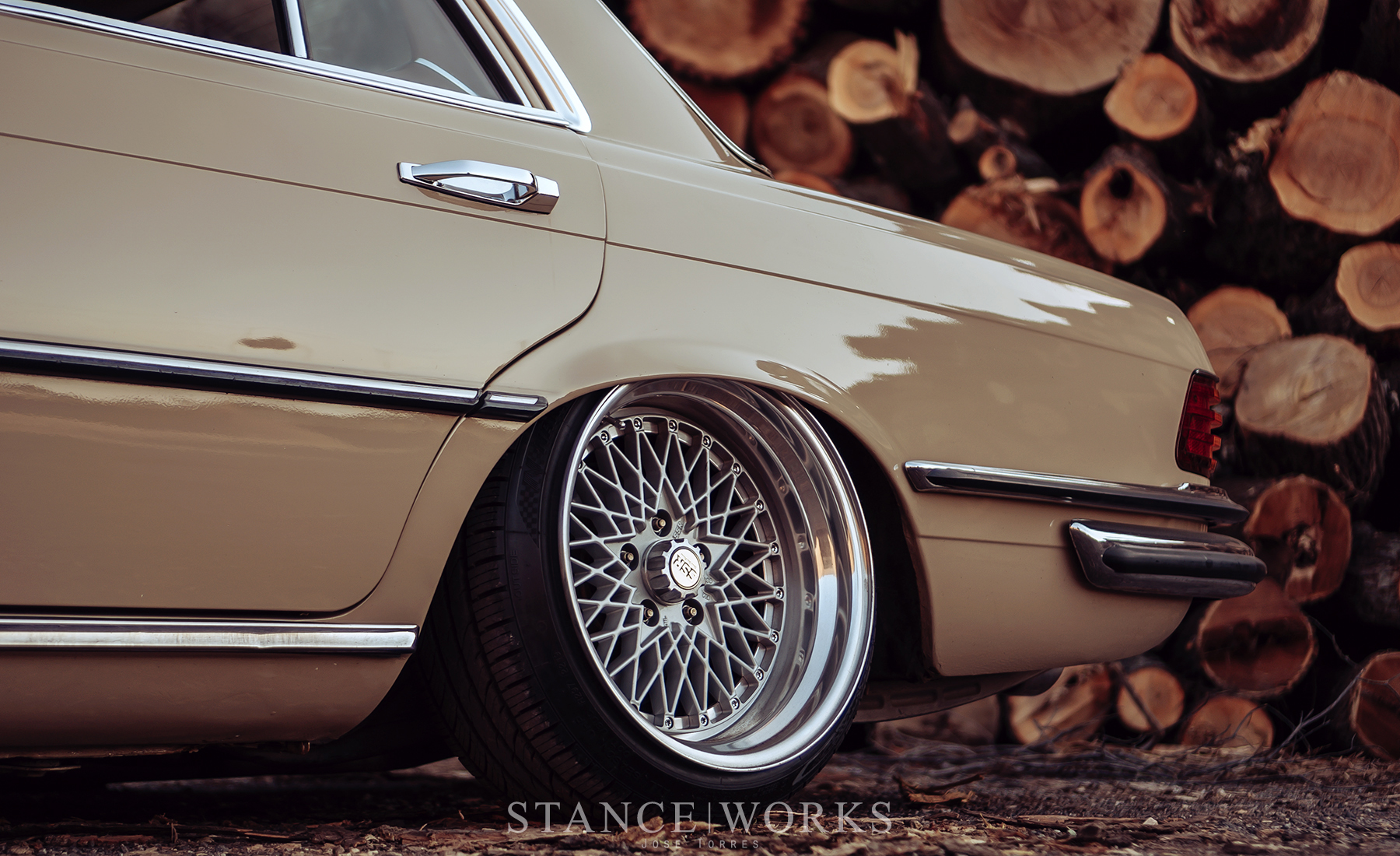 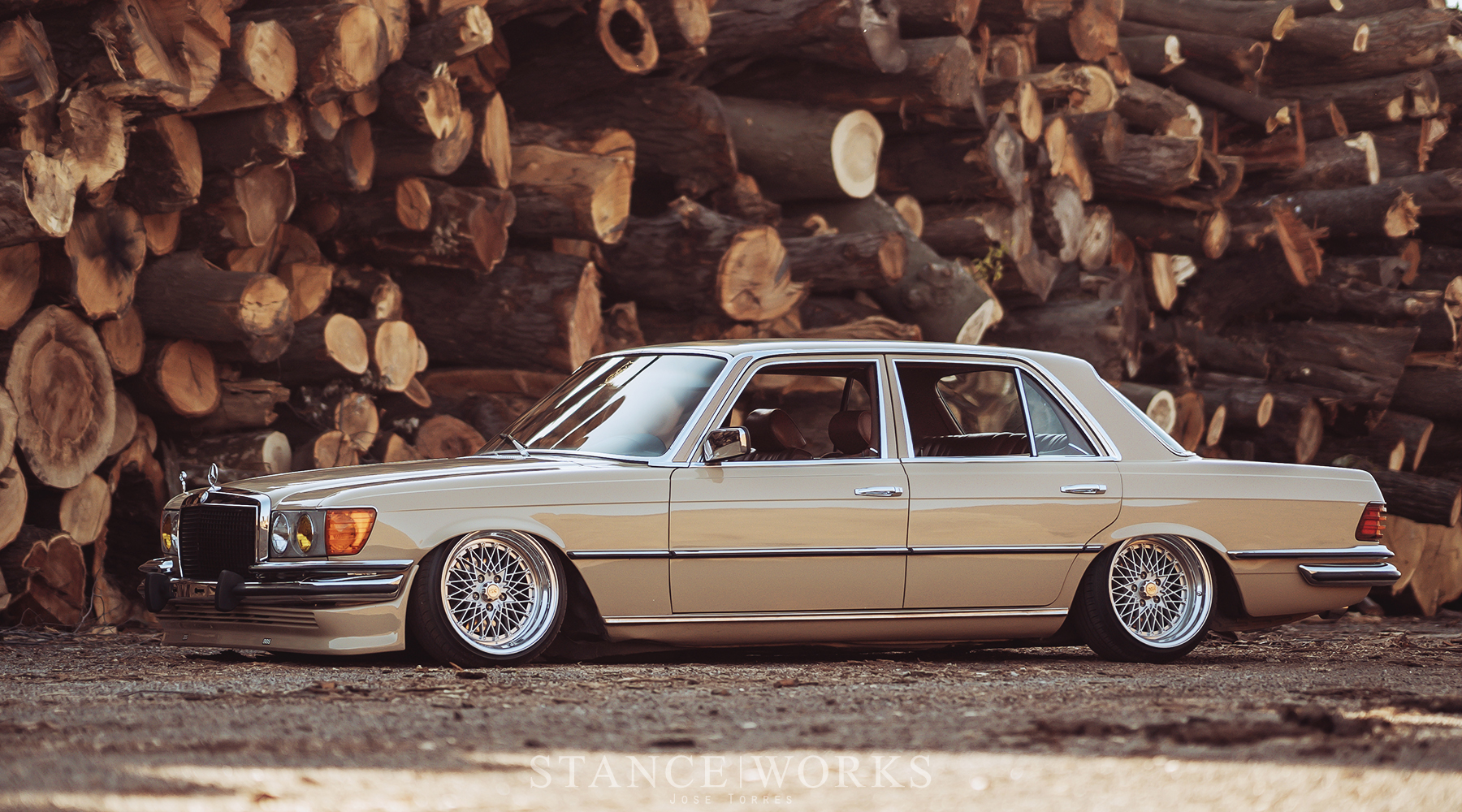 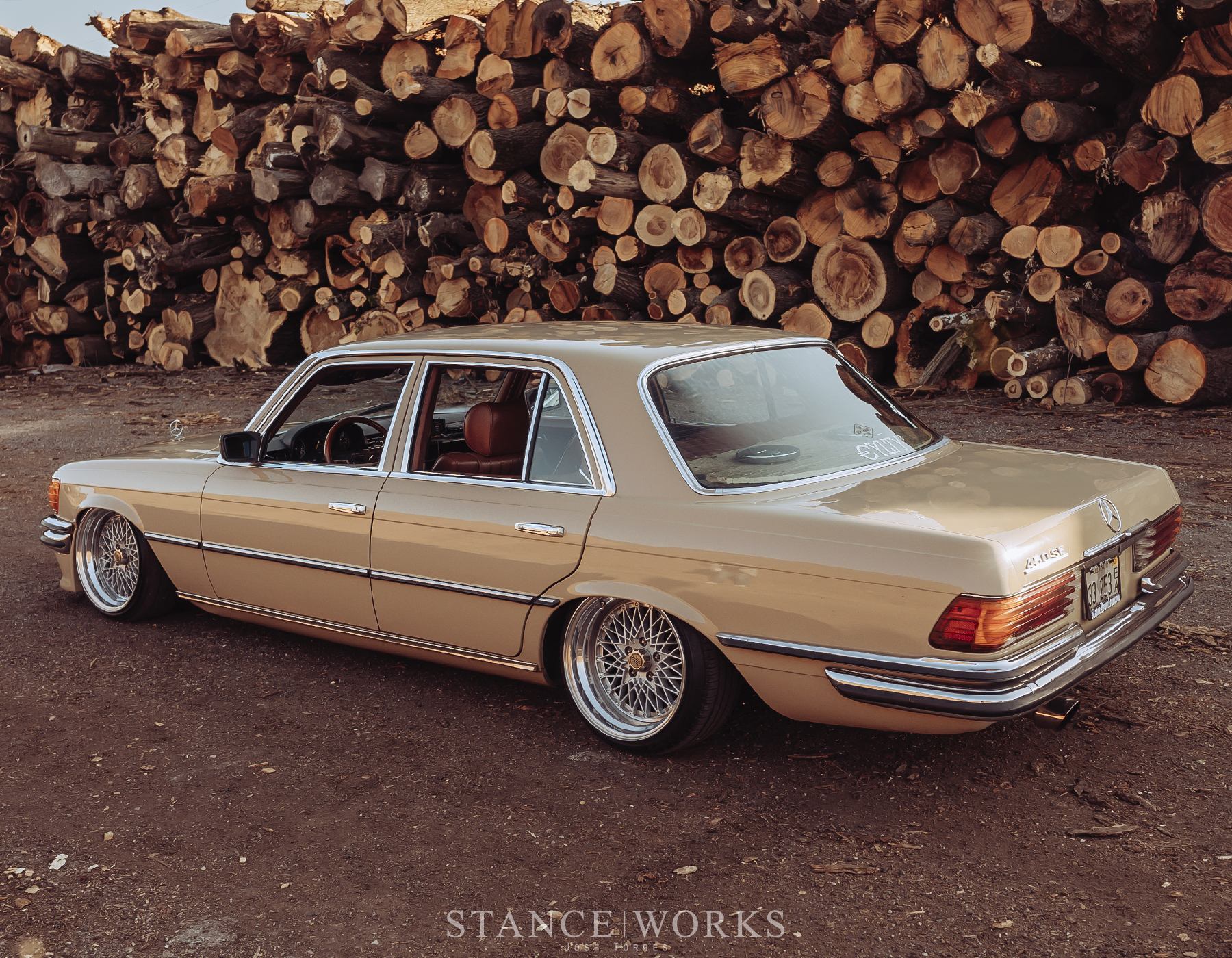 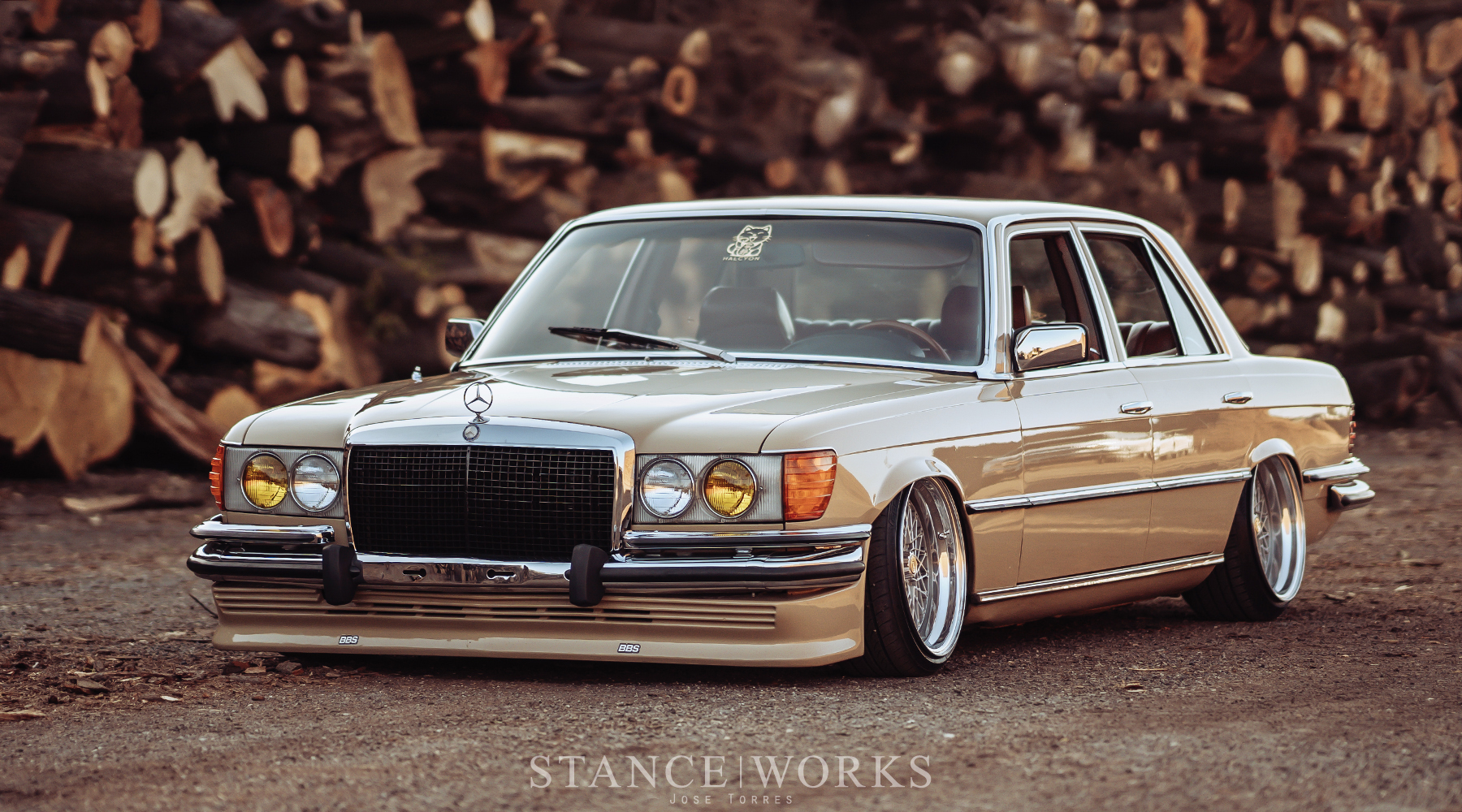 For the exterior, no corners were cut: a complete respray by Garage XIII took care of any blemishes and rust, and enveloped the car in a fresh coat of its original "Manila Yellow" hue. An extremely rare W123 BBS front air dam changes the front end of the car considerably, and required extensive modification to fit at all. 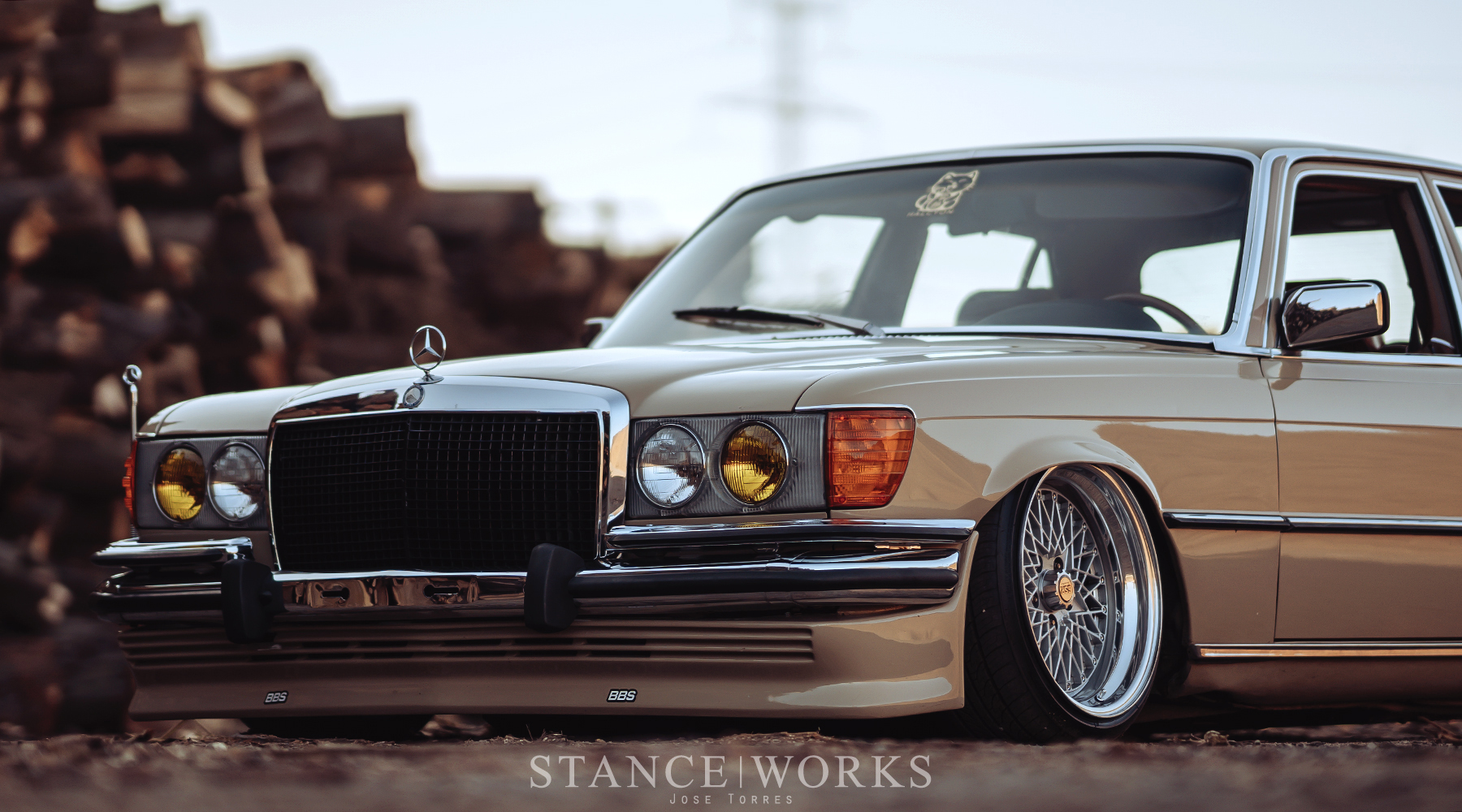 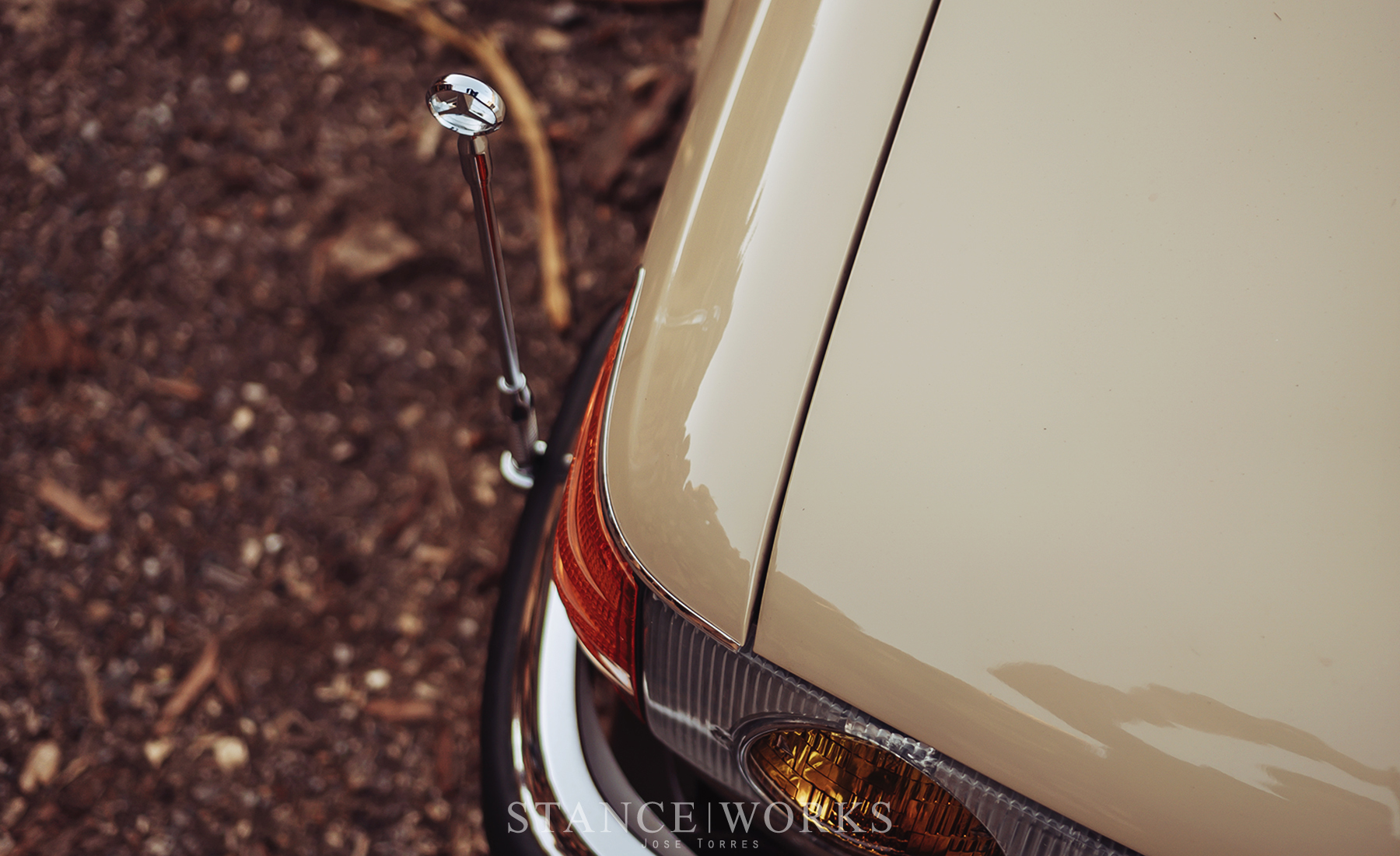 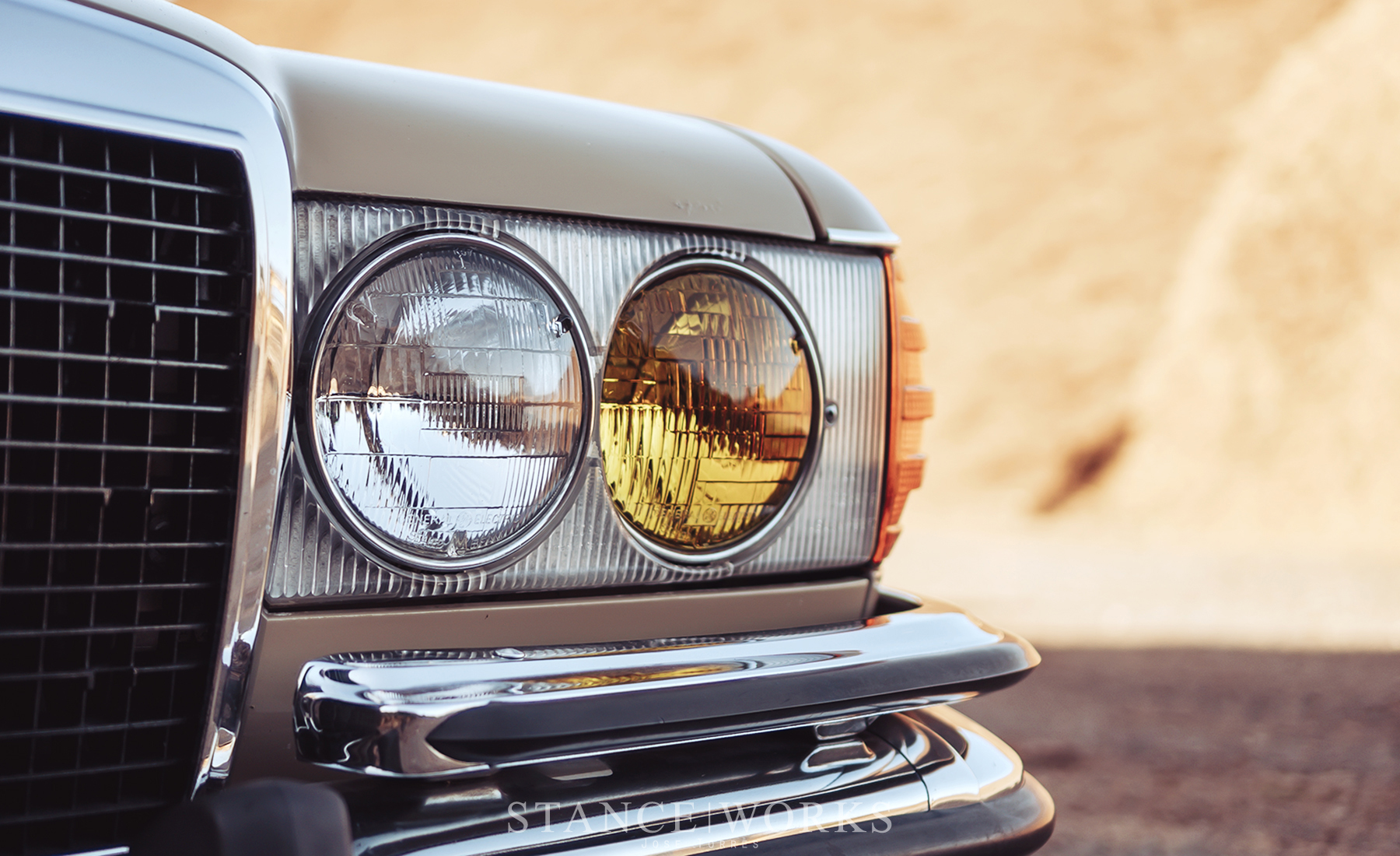 Stylistically, its the wheels that make the biggest change to the overall look of the car. Not one to go with the obvious, although tried and true setup of BBS RSs, Jose opted for a set of SSR Reverse Mesh splits. As one of the most classic Japanese mesh wheels ever, they fit the build well with a flavor similar to the BBS, but with a tinge of something different. Measuring out to 17x9 in the front and 17x10 in the rear, they're undoubtedly wider than anyone at Mercedes had ever anticipated going on the coupe at all. Despite that, they fill the wheel wells perfectly. 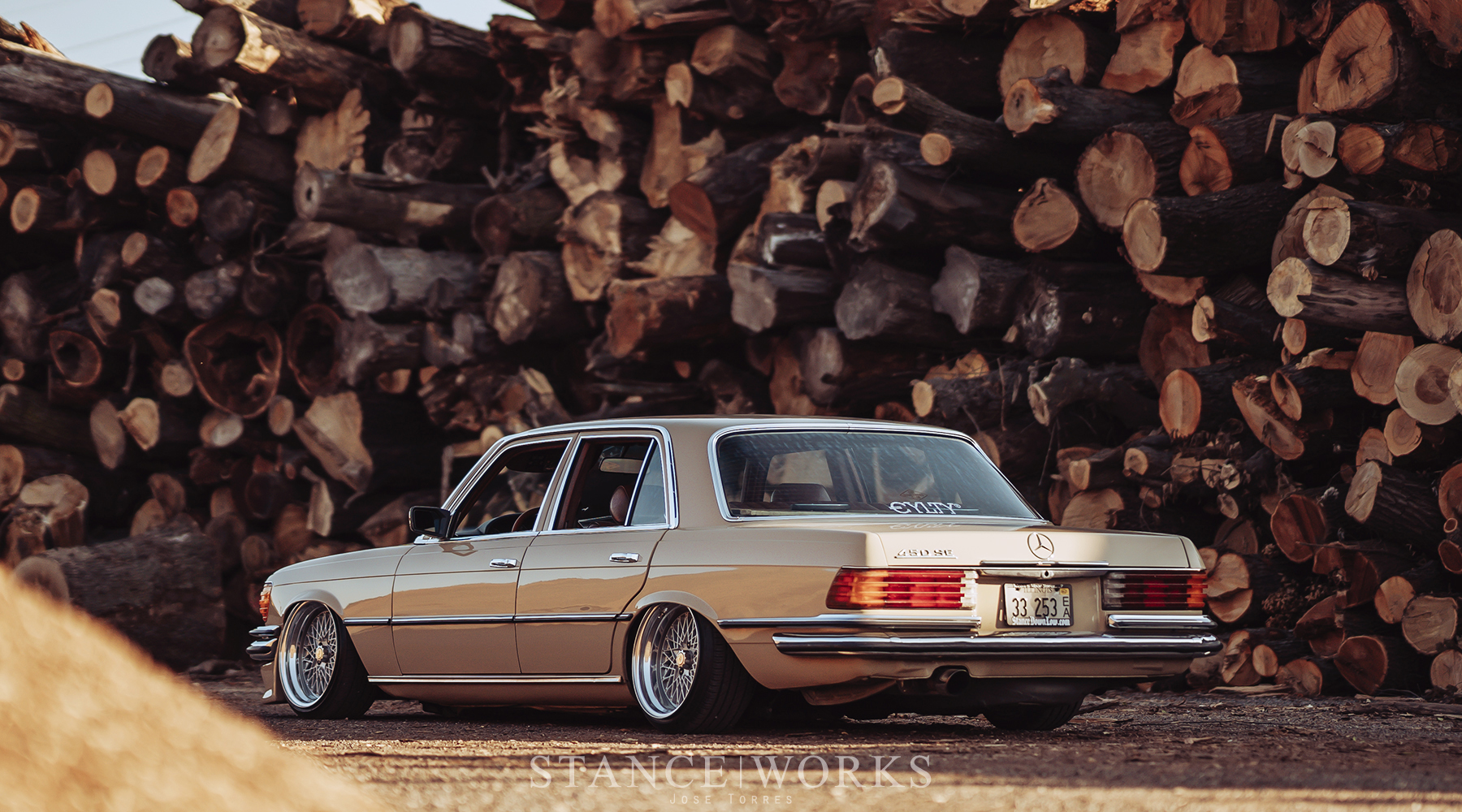 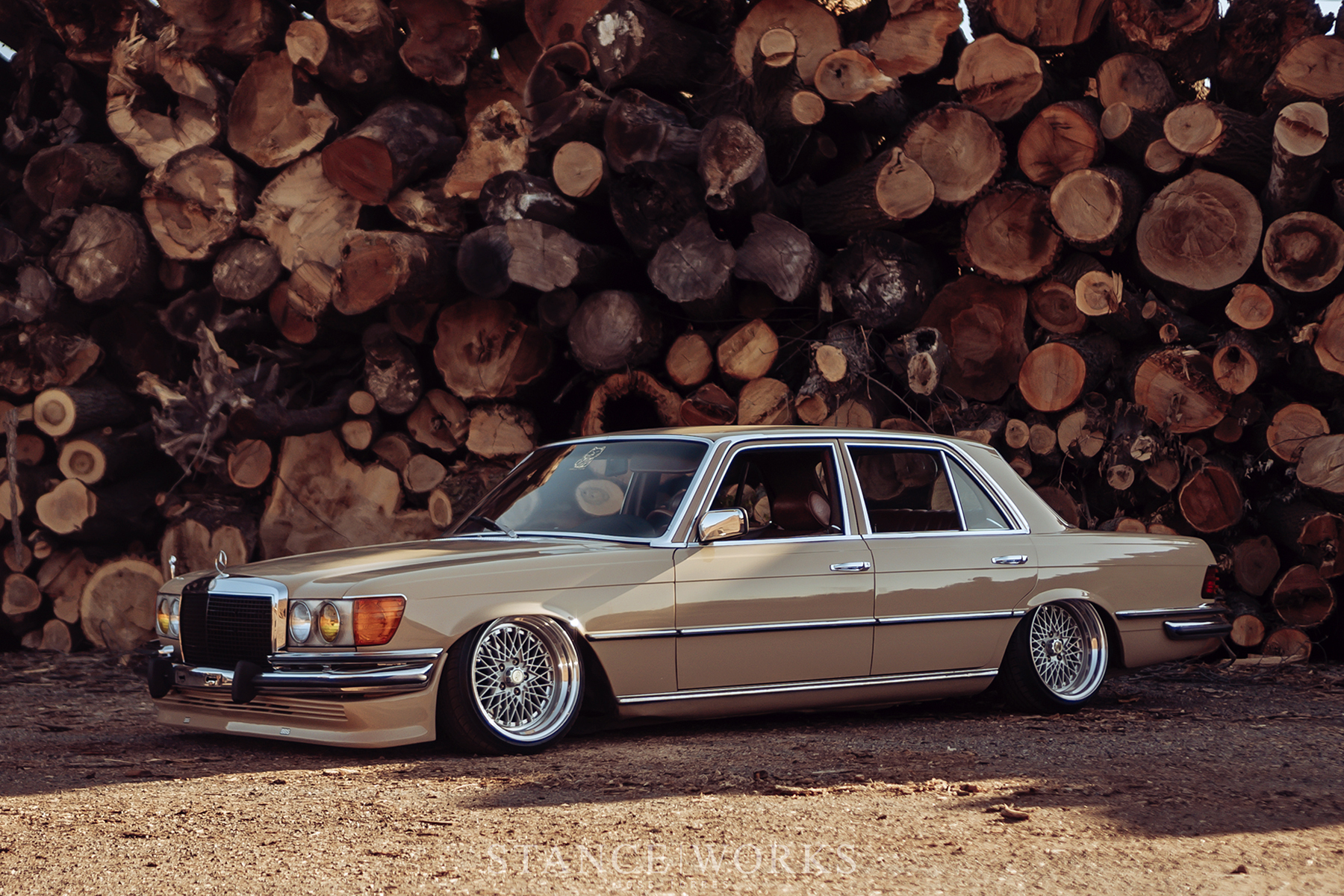 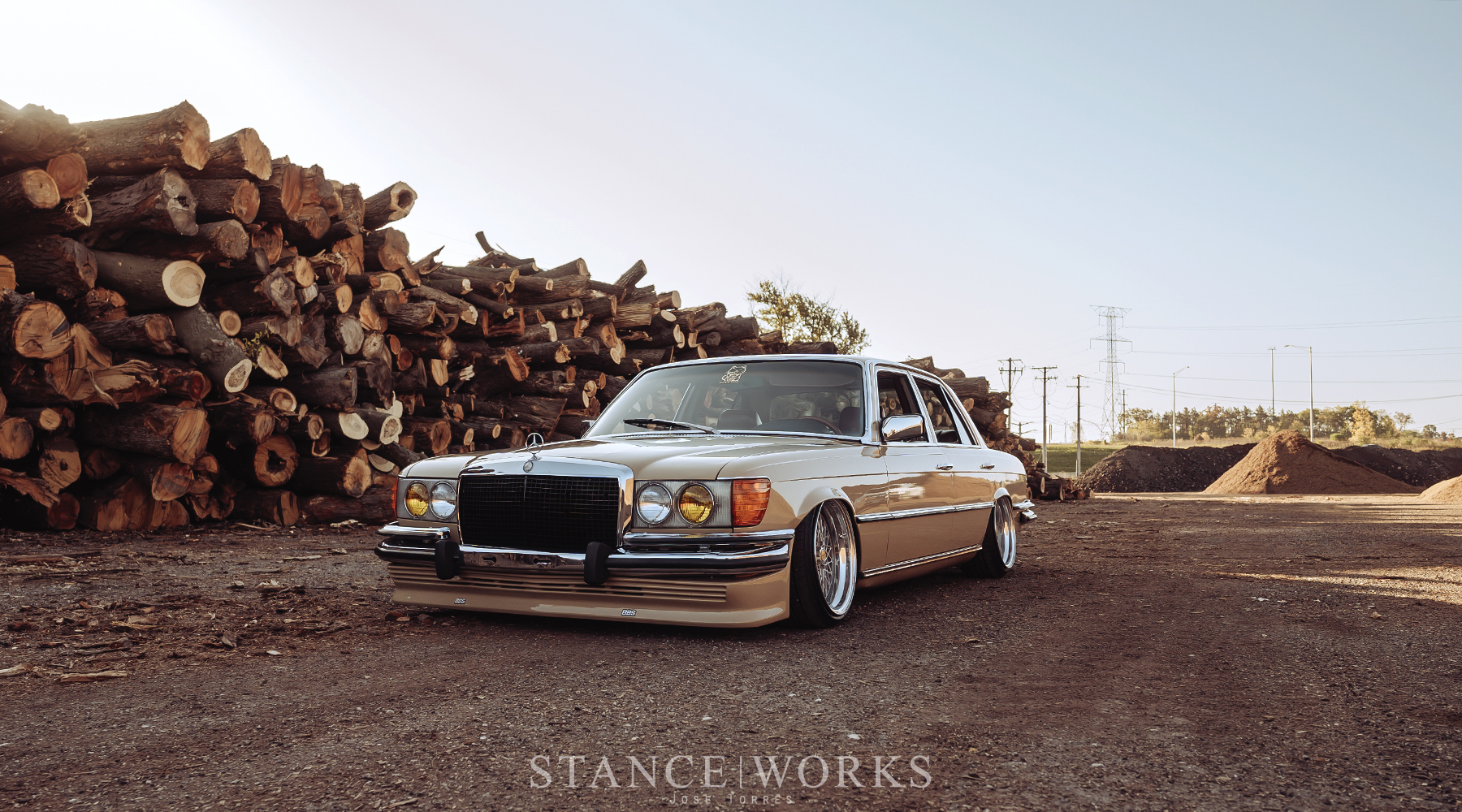 There's plenty left in the works yet, though, with an LS swap looming on the horizon in favor of the antiquated V8 that currently lies under the hood. Perhaps its sacrilegious, sure, but the power and reliability per dollar can't be beat, and Jose doesn't seem to mind. Even without, it seems as though he's reached the goal he set out for. "The Mercedes brand is quality and class," he says, "and when I acquired the Benz my goal was to bring the car back to its glory day, but with my personal touch." Here's to success in that endeavor, and to the many more we hope that follow. 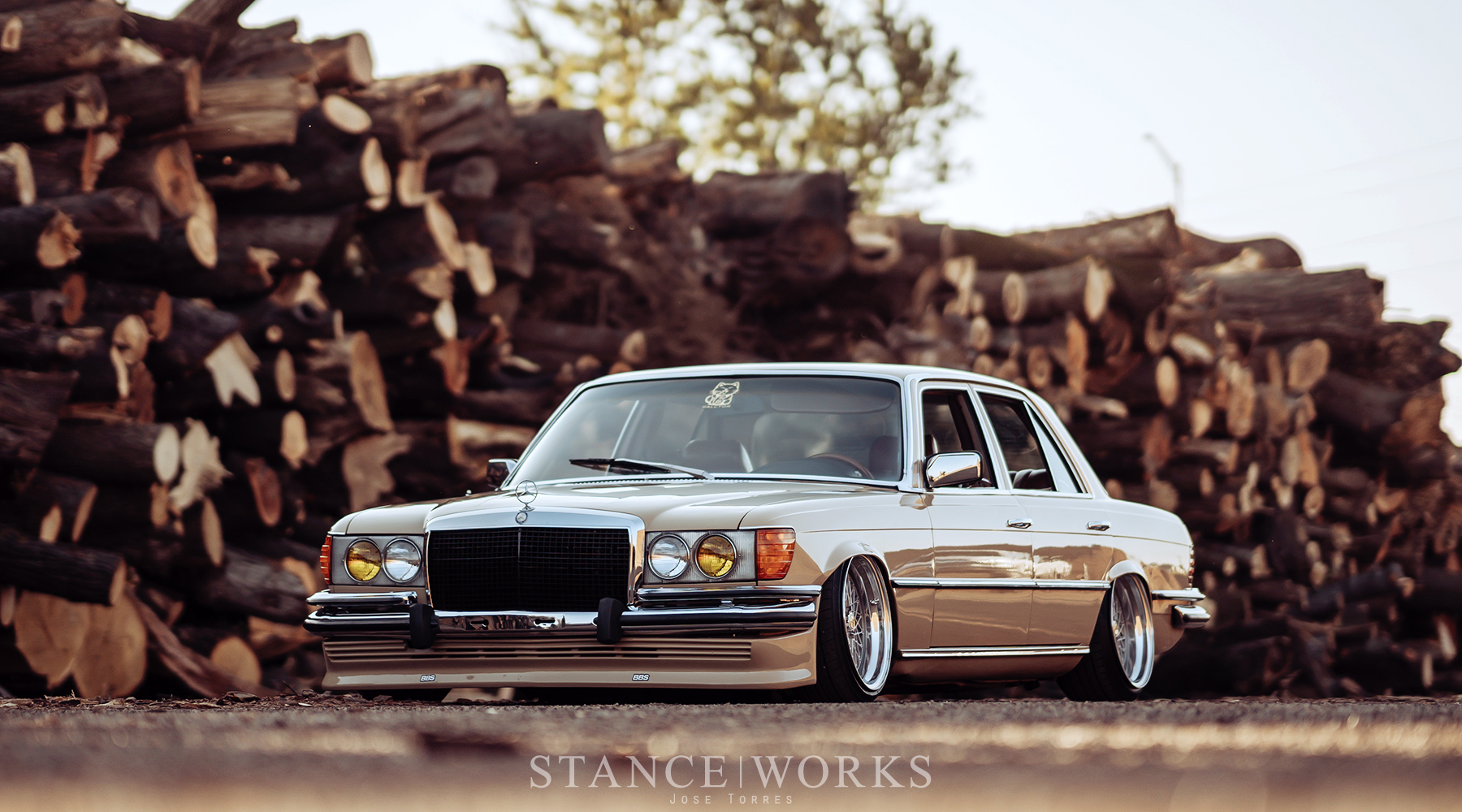