There's something rather difficult to express about the pillarless coupe as a whole. There have been a few examples brought to market, most of which seemingly get remembered as staples in their lineup: unique bits of design that stand out from the crowd. From BMW's E9 and E31 8-series to a slew of Muscle Cars from the '60s  and '70s, such as the 1965 Impala Coupe... all heralded for their superior design over their counterparts. The 500SEC at hand is included too: a relatively unique offering in contrast to its competitors, yet somehow, the concept of pillarless coupes still seems rare. Mercedes is still at it as one of the few with such an offering, relegating the concept of pillarless design almost entirely to the history books, if at least only for now. Today, though, we look at an incredible example: Kamil Andrysiak's W126, which takes everything that makes the 500 SEC special and builds upon it, culminating in an OEM-Plus styled coupe that embraces its factory aesthetics with a touch of attitude and modernity. 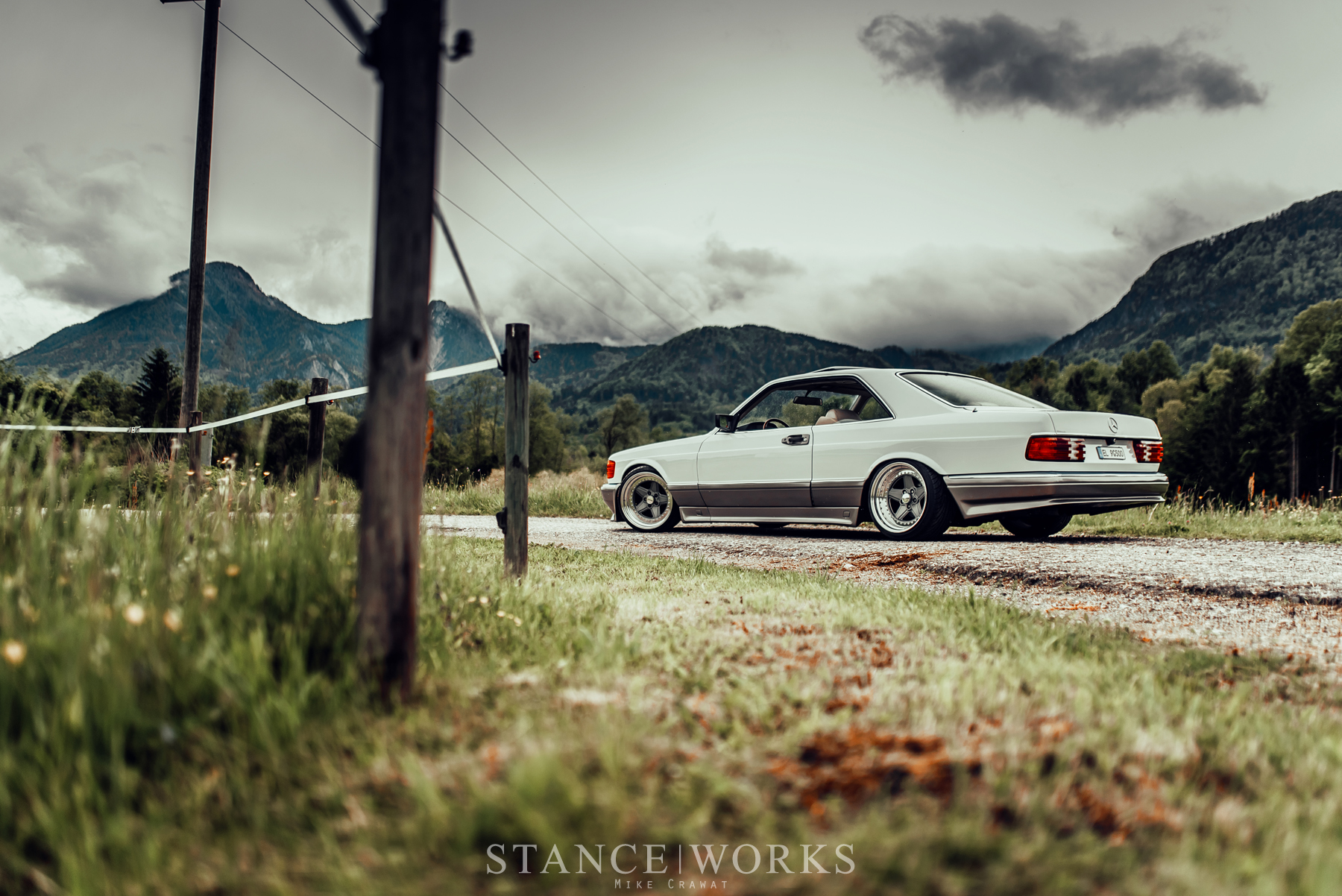 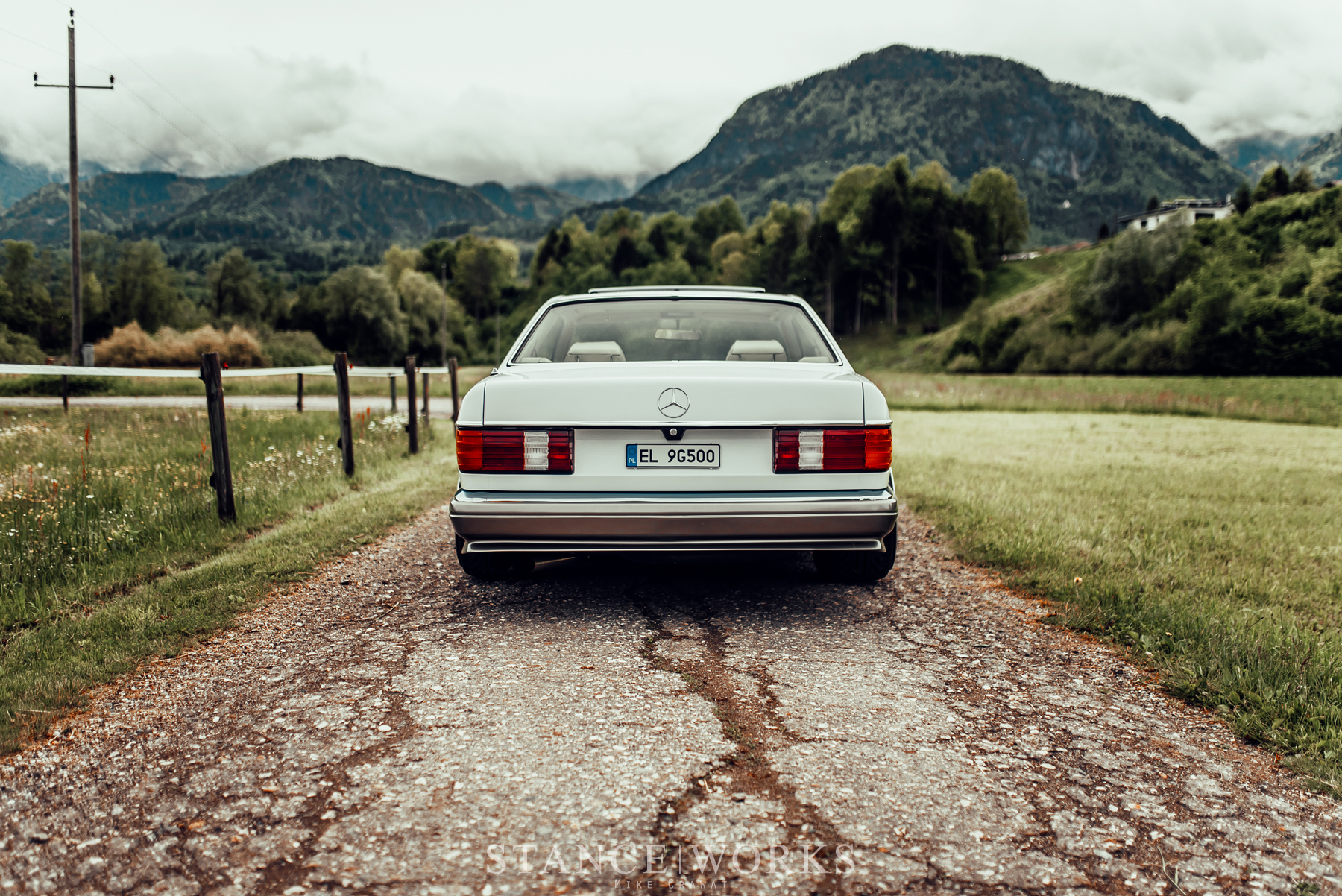 Introduced in 1979 as the second-generation S-Class Mercedes, as we've come to know them today, the W126 platform was the top of-the-line offering for the marque at the time, definitively focusing on a balance between luxury, comfort, and power delivery. While not a sports car in it's own right, the S-class has never been short on performance capabilities, often brining massive engines with considerable power to the table. Together, these aspects give the SEC its undeniable presence, even by today's standards, nearly 40 years later. The massive coupe commands attention and respect, and Kamil's car only furthers that. 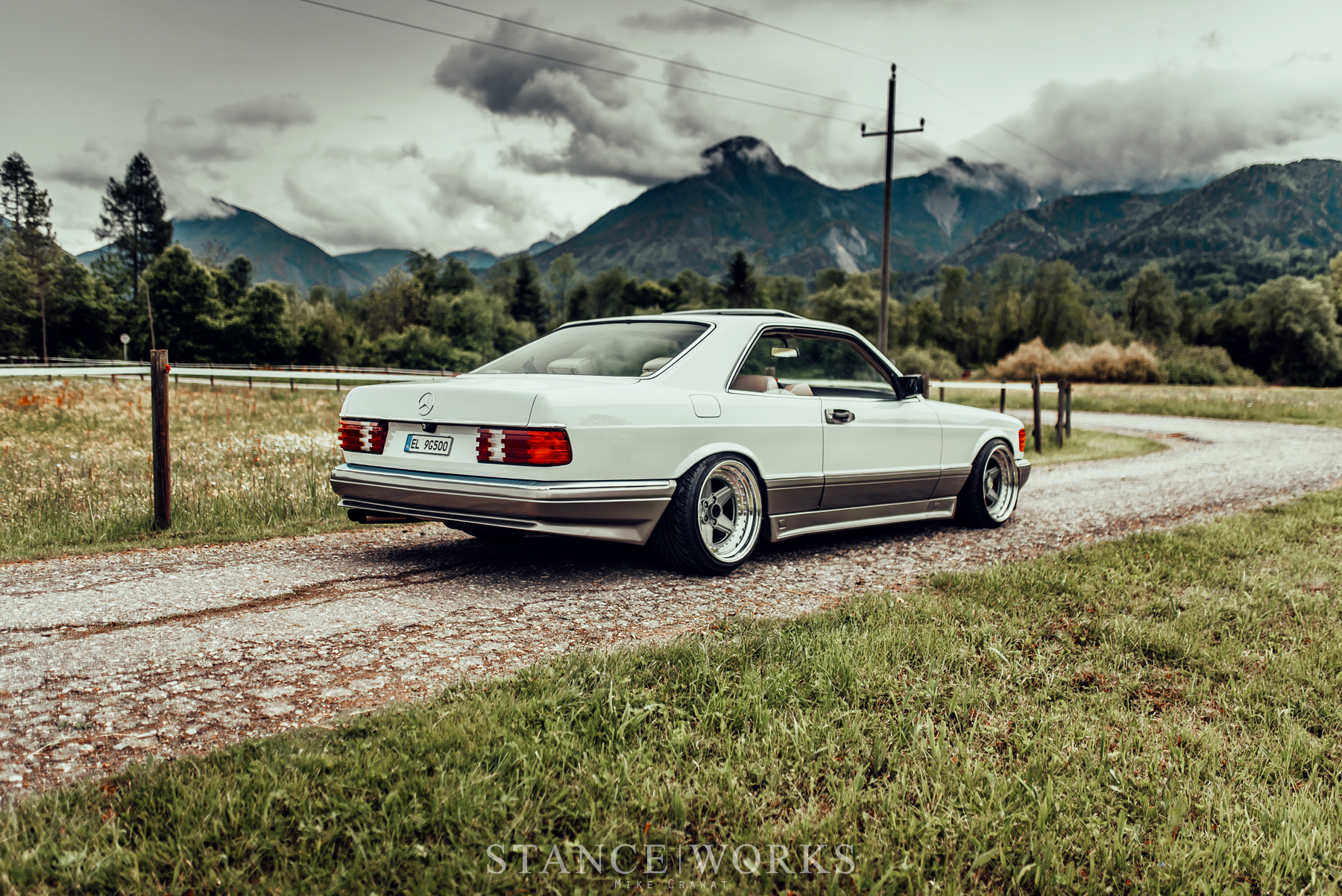 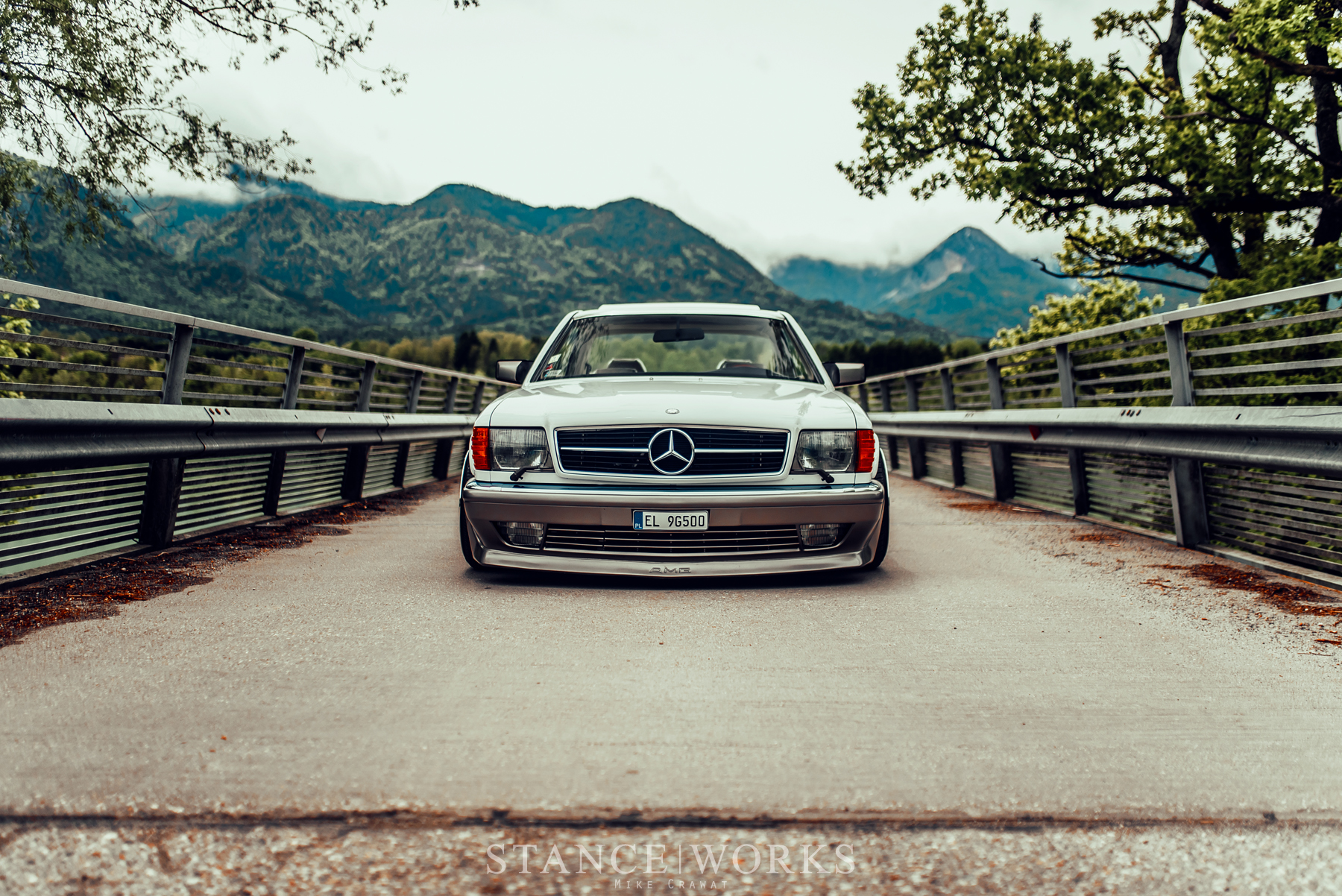 Kamil's Coupe's foundations are rooted in the AMG brand. While not an AMG model itself, Kamil turned to the engineering firm for aesthetic inspiration, sourcing SEC AMG-style bumpers for the car, and finishing them to retain the white-and-silver two-tone paint scheme the car was originally equipped with. Front and rear bumpers, as well as side skirts, liven up the look of the car considerably, leaving behind the "old man cruiser" look in favor of something a bit more sharp-edged and defined. It doesn't hurt, either, that the kit helps close the gap between bumper and asphalt, too. 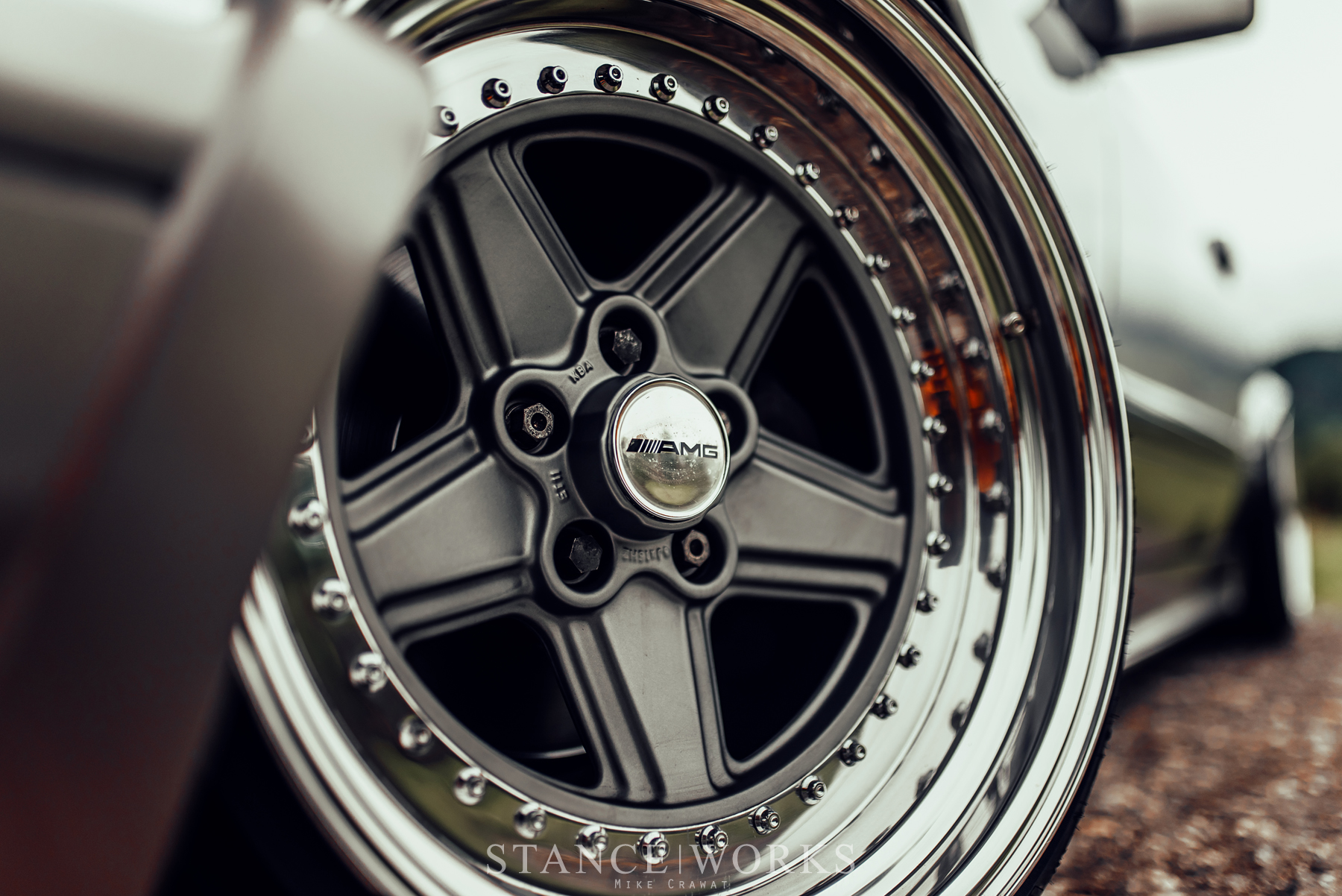 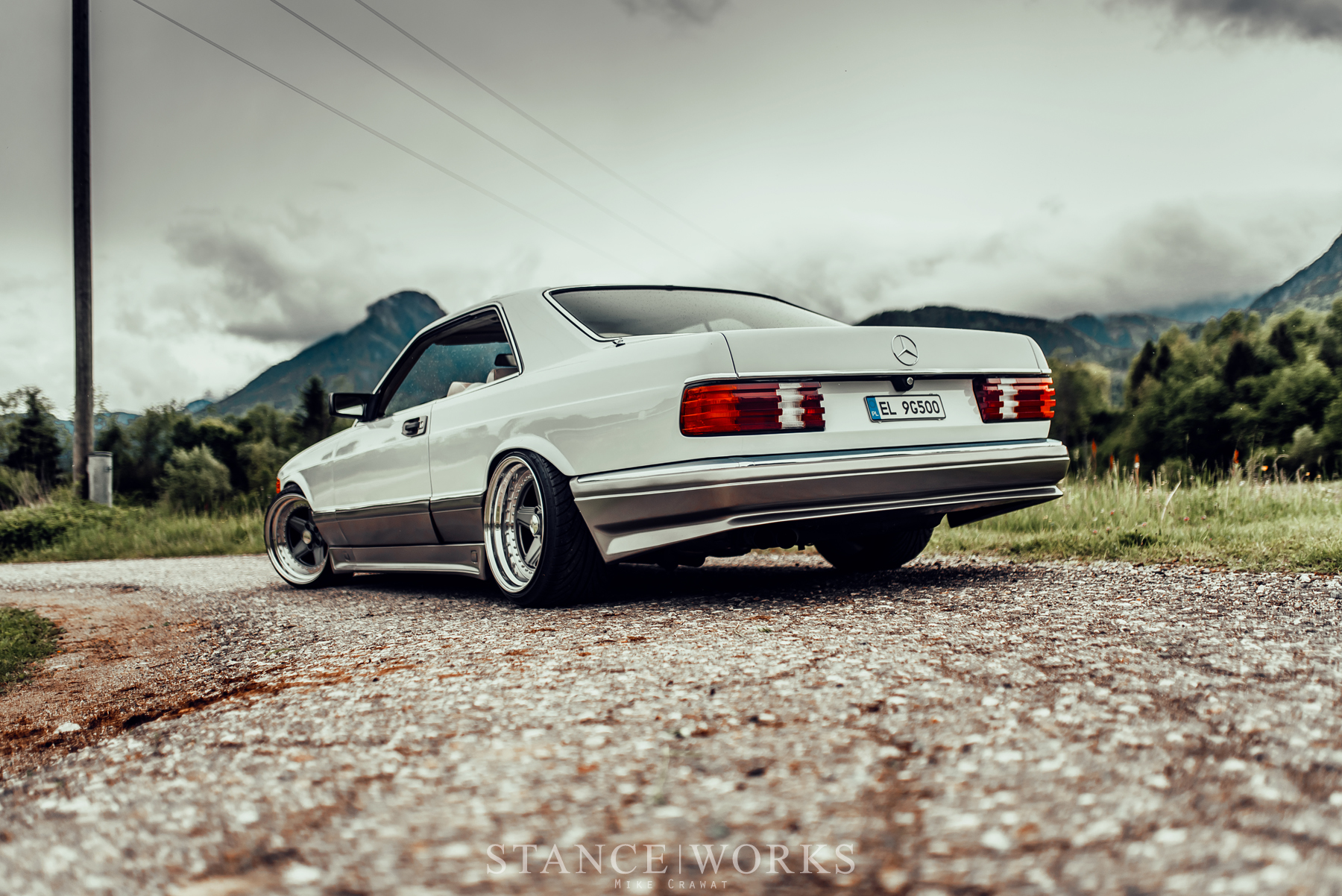 Inside the car, things are kept similarly-spec'd, with an incredible pair of OEM-option adjustable air-bolstered Recaro seats, complete with controls and perforated center sections, as a focal point. A black-centered Nardi wheel with wood-grain ring matches the factory wood trimming in the car, furthering the factory-optioned aesthetic the car exudes. If it weren't for the ride height, one might assume the car is indeed as was-delivered. 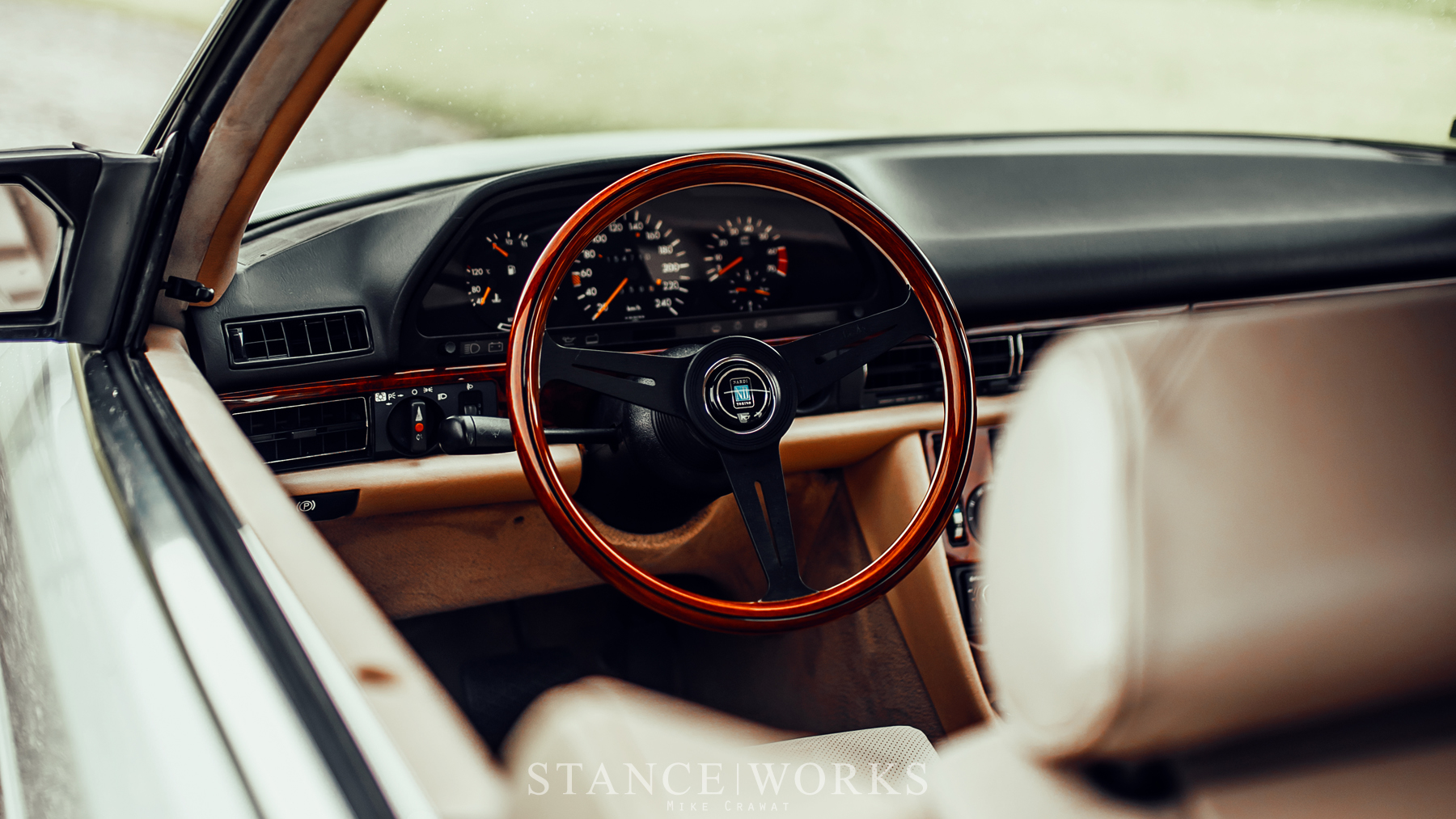 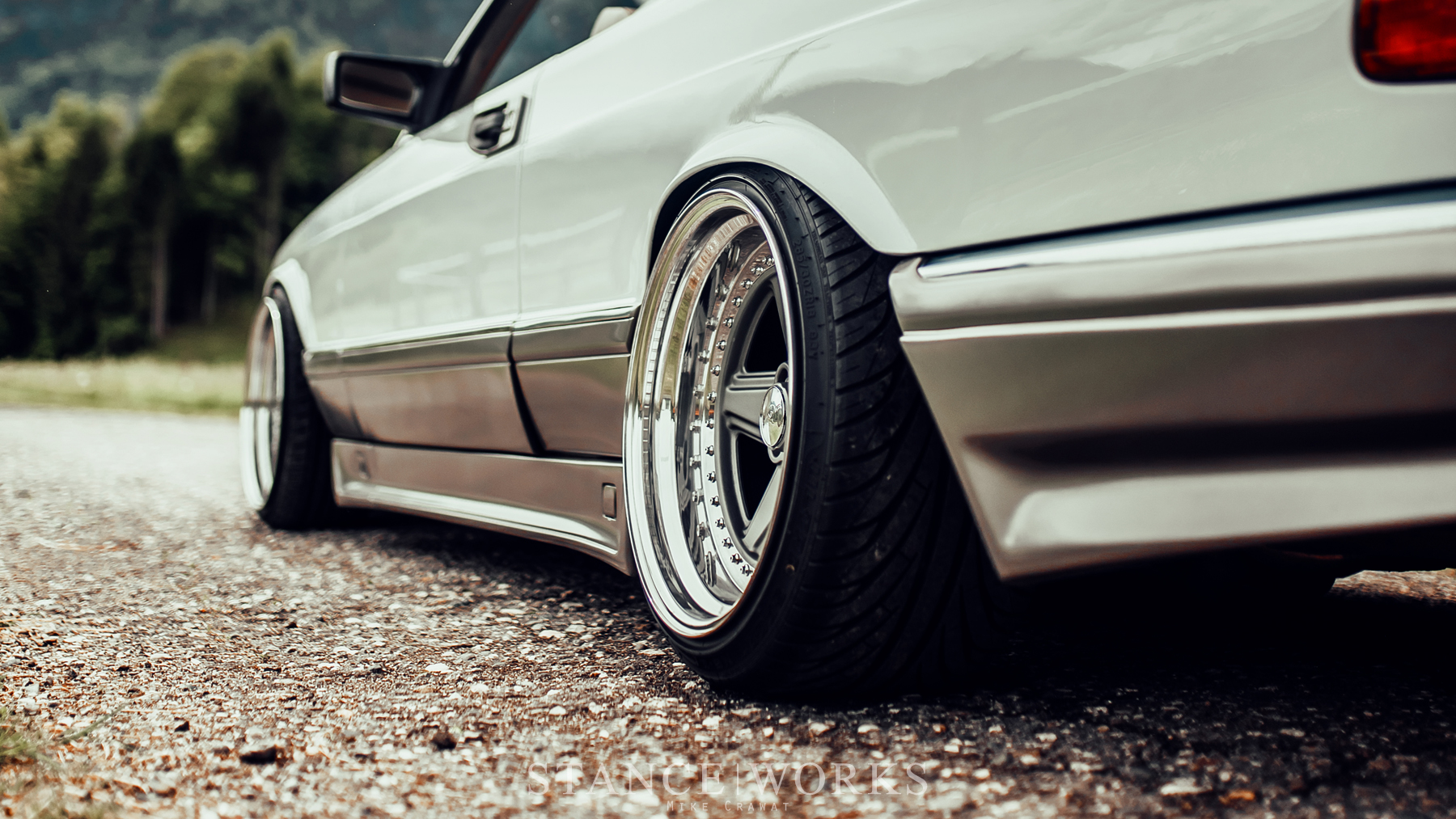 The dead giveaway, of course, is the split wheels. Those in-the-know will be quick to point out that the classic AMG "Penta" wheels were never offered as three-piece splits, but the upgrade is, by any measure, a welcome one. As icing on the cake for the overall look of the car, Kamil turned to South Wheels in Poland for the one-off treatment. The original 16" factory AMG wheels now measure out to an impressive 18x10 in the front and a massive 18x12 in the rear, with 285mm rubber out back providing traction at the drive wheels. The aggressive fitment might not be as-spec'd by Hans Werner Aufrecht and Erhard Melcher, the founders of AMG; however, it's hard to deny just how incredible the entire setup looks. With centers color-matched to the bumpers, it's an overall look that is undeniably "AMG" at heart. 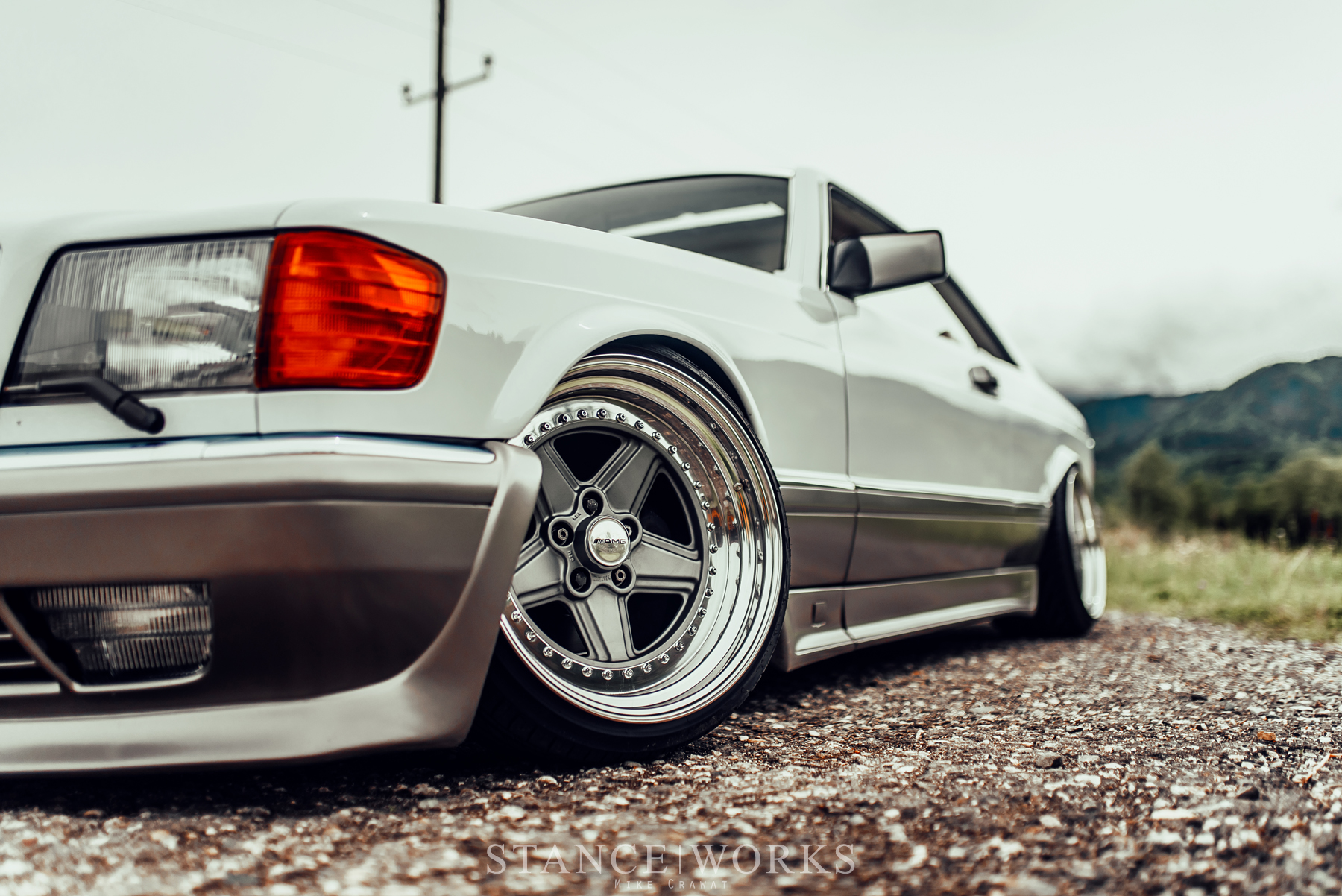 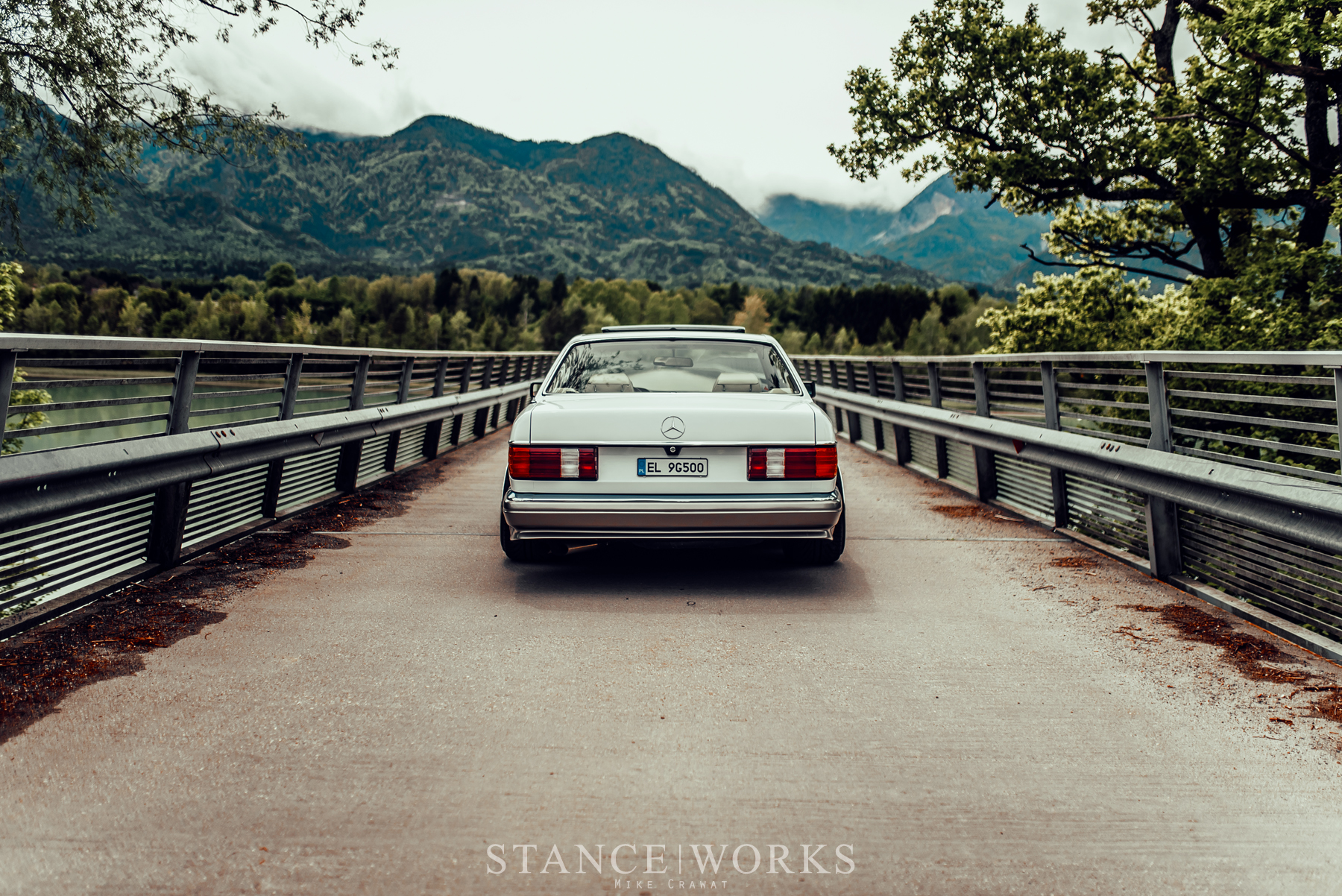 It's easy to see why Kamil Andrysiak's 500SEC is a continued crowd favorite: it offers a bit of something for everyone, from those that remember the SEC new, to those that haven't had the fortune of seeing one prior. Sharp lines, incredible taste, and if I may add, the total lack of a B-pillar, make this car one that can be neither missed nor ignored. 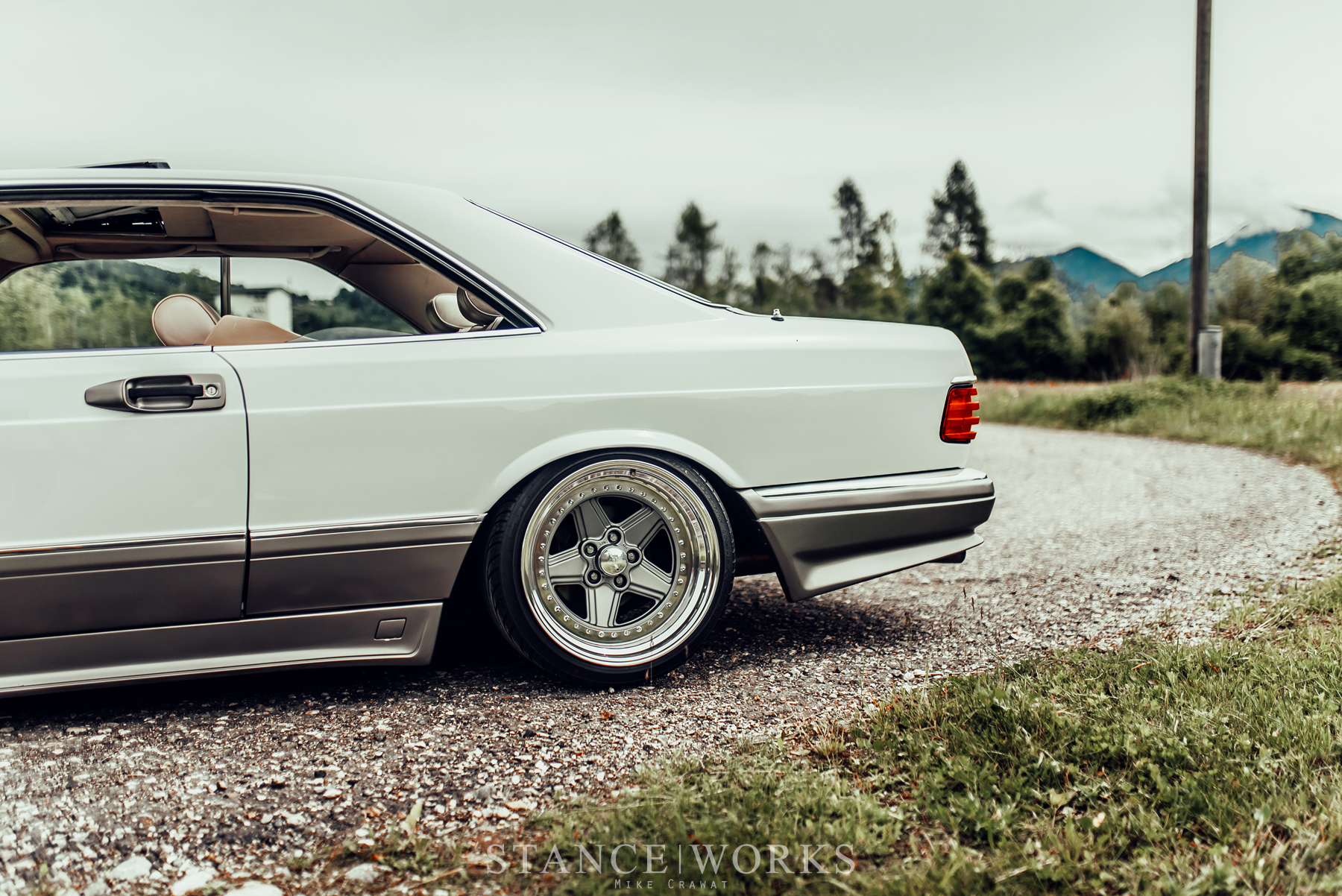