It's rather on-the-nose, with a name like that: the Audi V8 doesn't leave much room for guessing what lies under the hood. Introduced in 1988 as a flagship model for the marque, the V8 brought about the first union between the Quattro system and an automatic transmission, and was, as one might guess, the first Audi model to utilize a V8 engine. The Germans were feeling crafty when they named it, clearly. For the most part, in the decades that have followed, the Audi V8 has earned its place in history as, well, not much more than a high-end luxury sedan. A pair of driver's titles from 1990 and 1991 earned Audi and the V8 the first-ever back-to-back championships in DTM, giving them a place in enthusiasts hearts, such as you and I... but for the layman, it's car that's largely been forgotten. 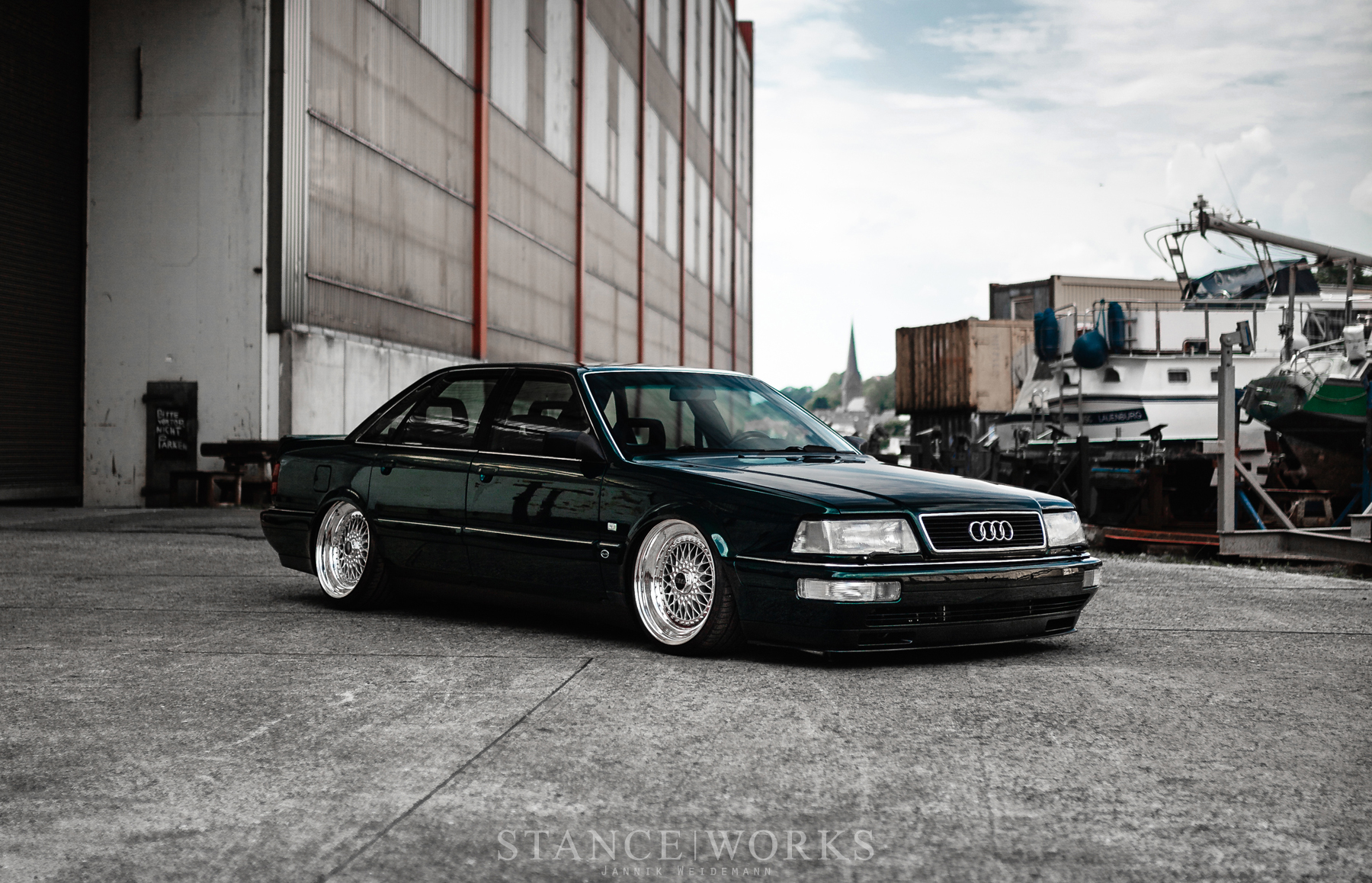 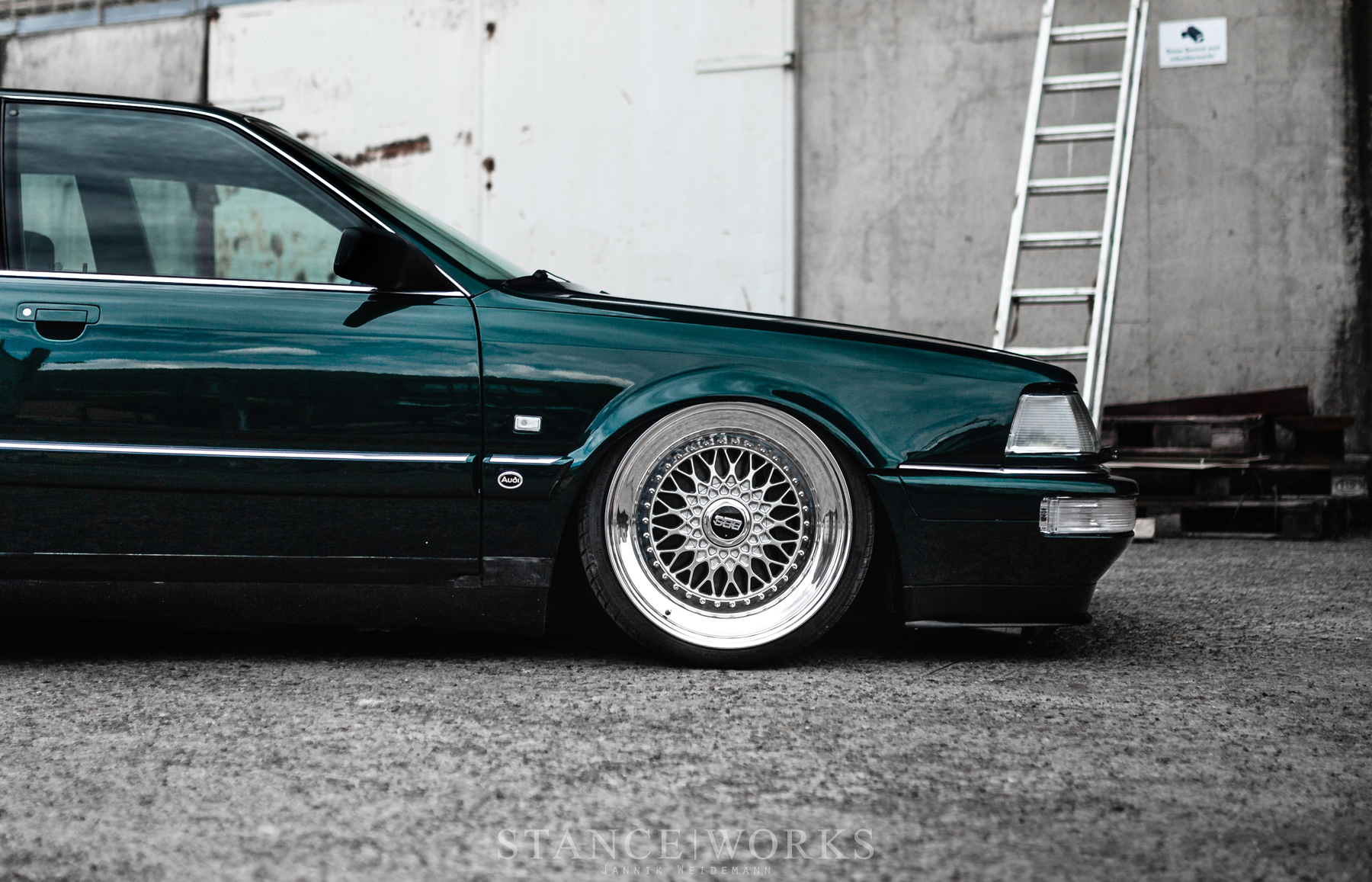 Arne Grau, though, is on our side of the fence: one with an appreciation for the lines and the history of the big-bodied sedan. His vision hybridizes the two faces the car has earned, between luxury tourer and high-performance race car. Lurking beneath the sleek stature of the sedan is a - by no surprise - a V8, only this one sports a massive turbo, making this Q-ship as lethal as its DTM ancestors. 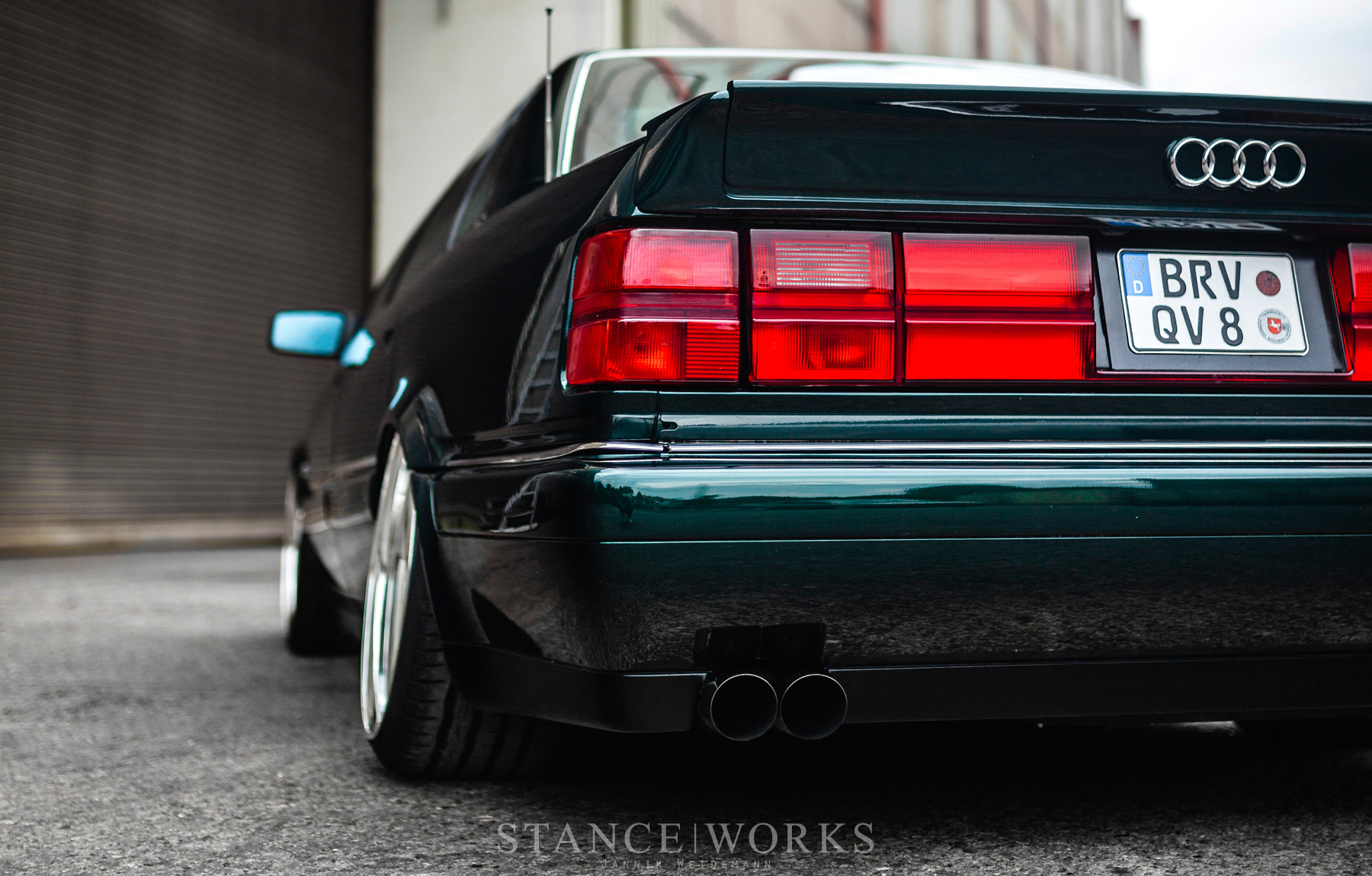 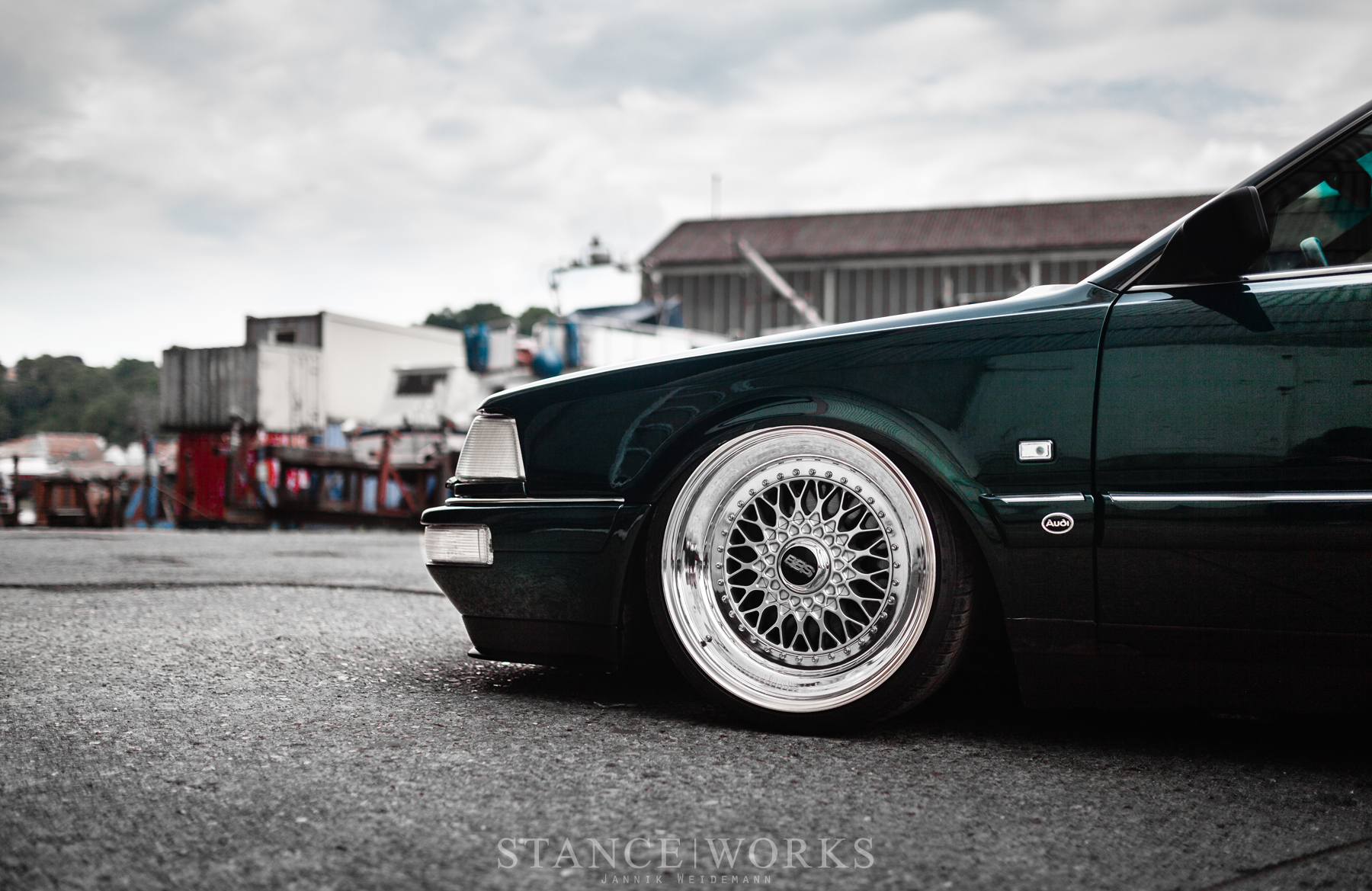 Arne's project began just over a year ago, with the acquisition of the '91 V8 and a head full of plans. He made haste, ripping the car down to its essentials in preparation for the engine buildout and bodywork. With an example a bit worse for wear on his hands, the car was whisked off to the bodyshop, where it was given extensive treatment to fix numerous dings, dents, and flaws. A coat of Jet Green Metallic paint was laid down, instantly improving the car from its former shade of Geriatric Silver. 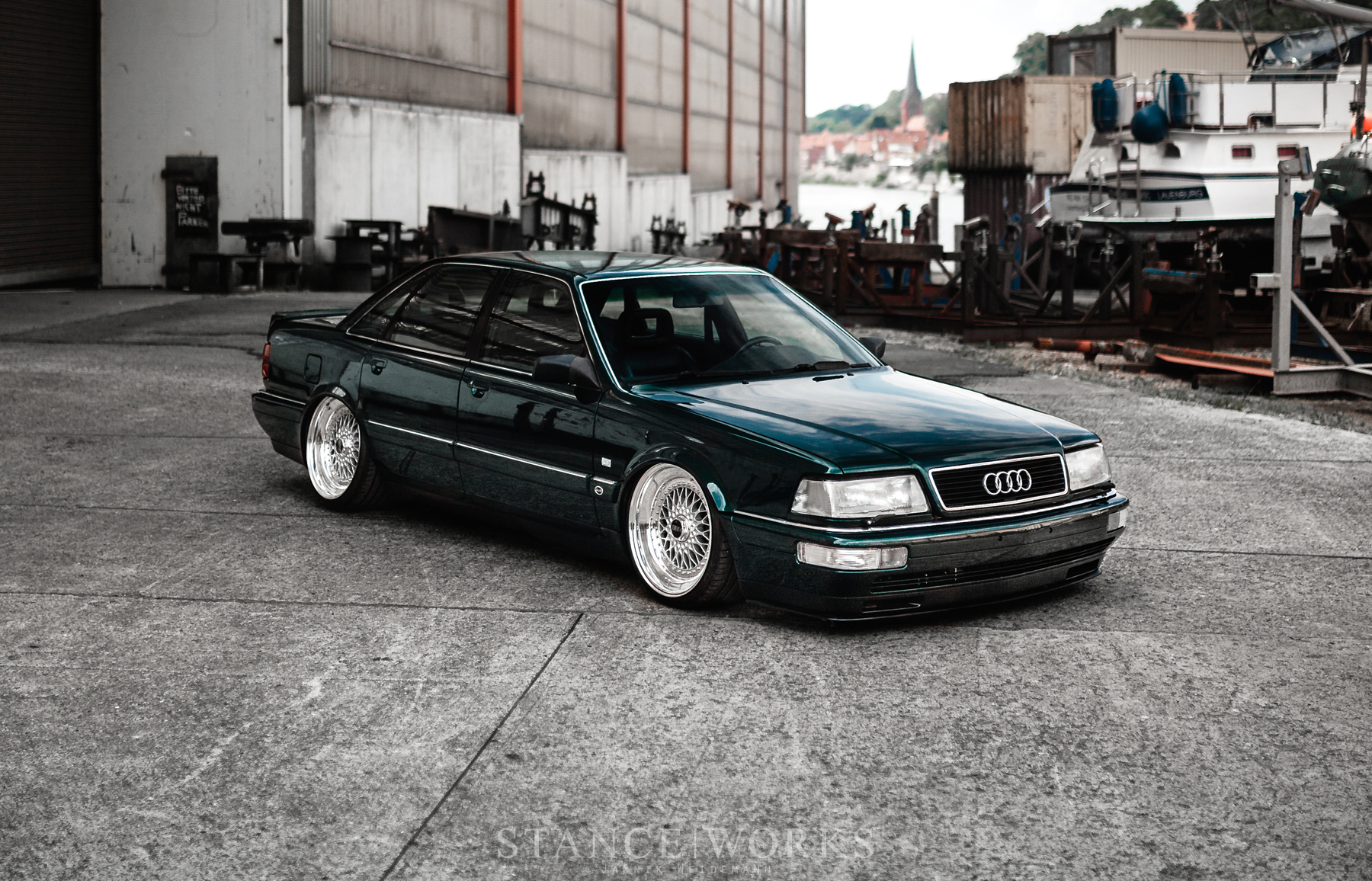 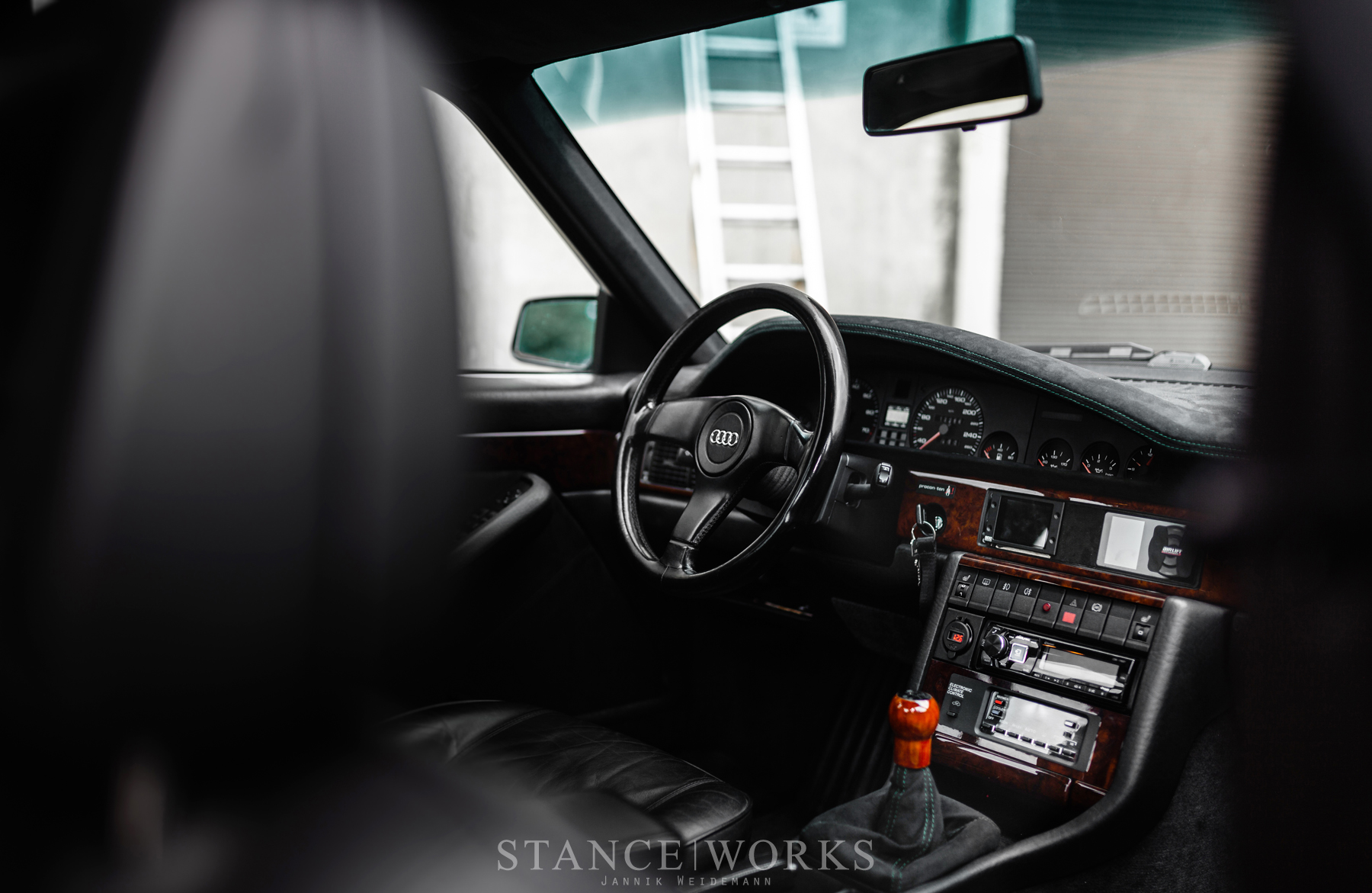 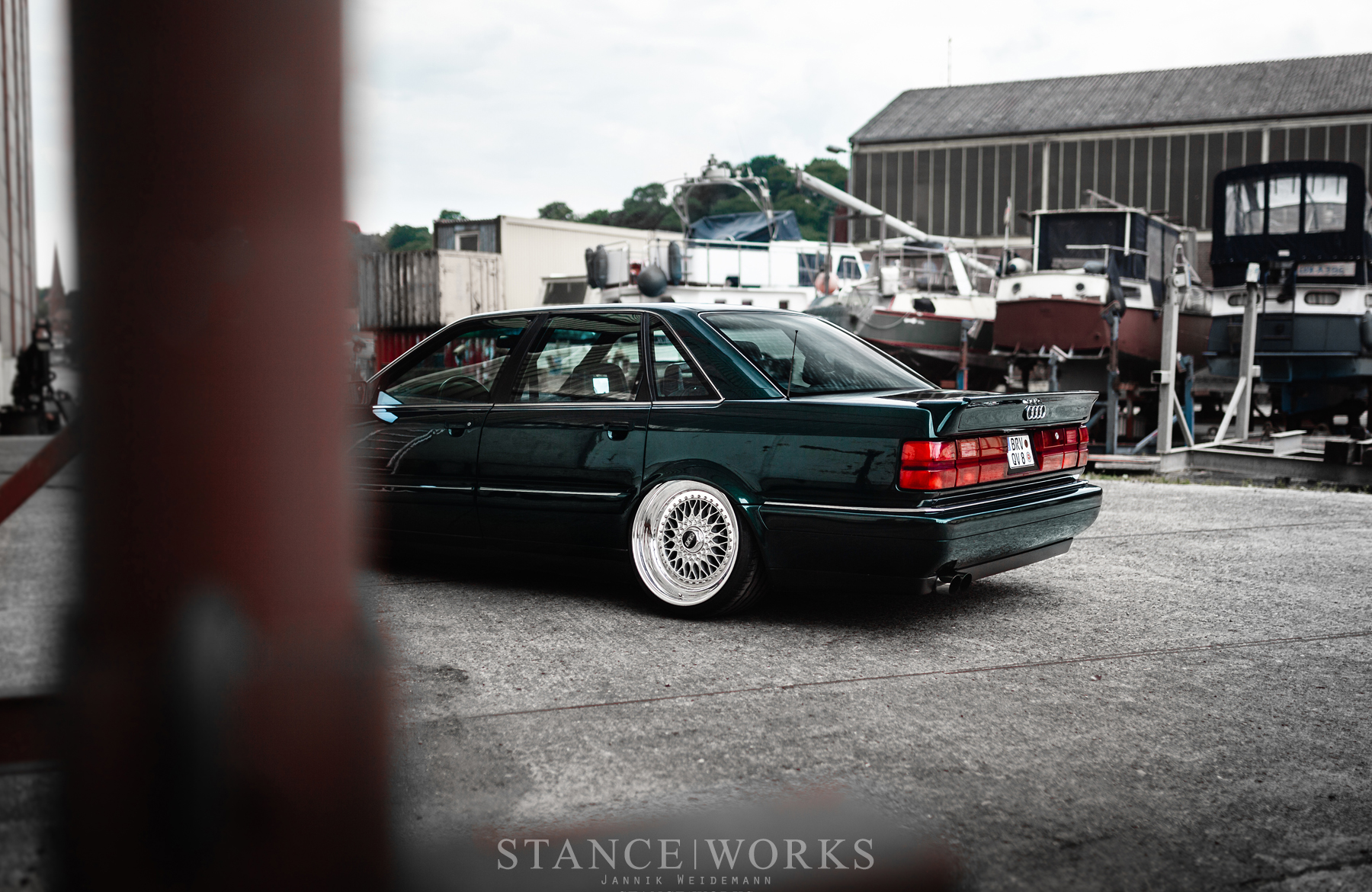 The metallic green over a clean, black interior makes for a pairing that embraces the lavish, opulent status the car once displayed, when new. Paired with a set of massive, custom-built 19" BBS RS, it becomes clear that Arne is onto something special. Finished in silver with polished lips, the wheels accentuate the car's brightwork, and fill the wheel wells to the brim. Air Lift Performance suspension and management close the gap between the car and Mother Earth, making for a project that could be considered "finished" in its own right. 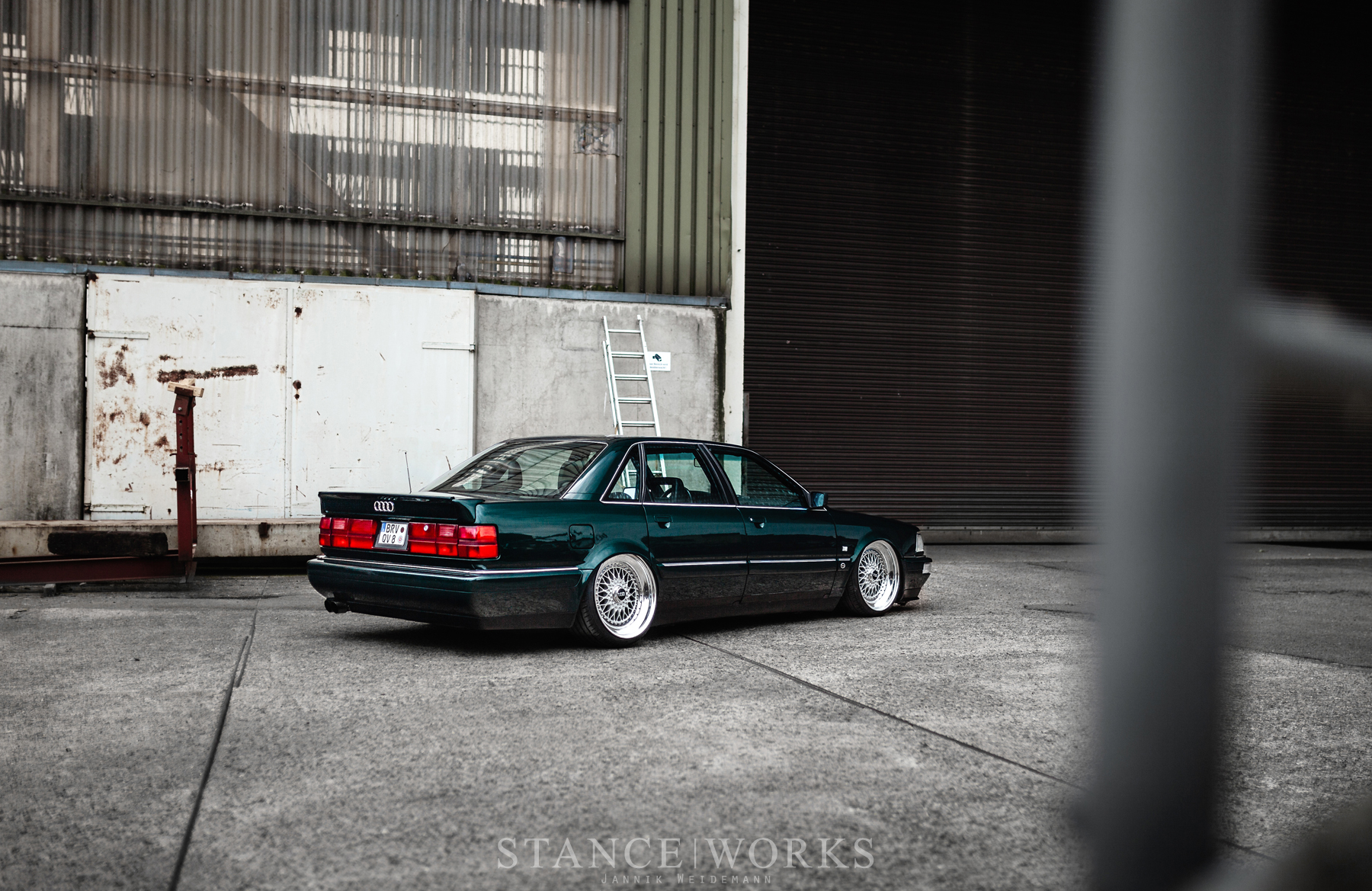 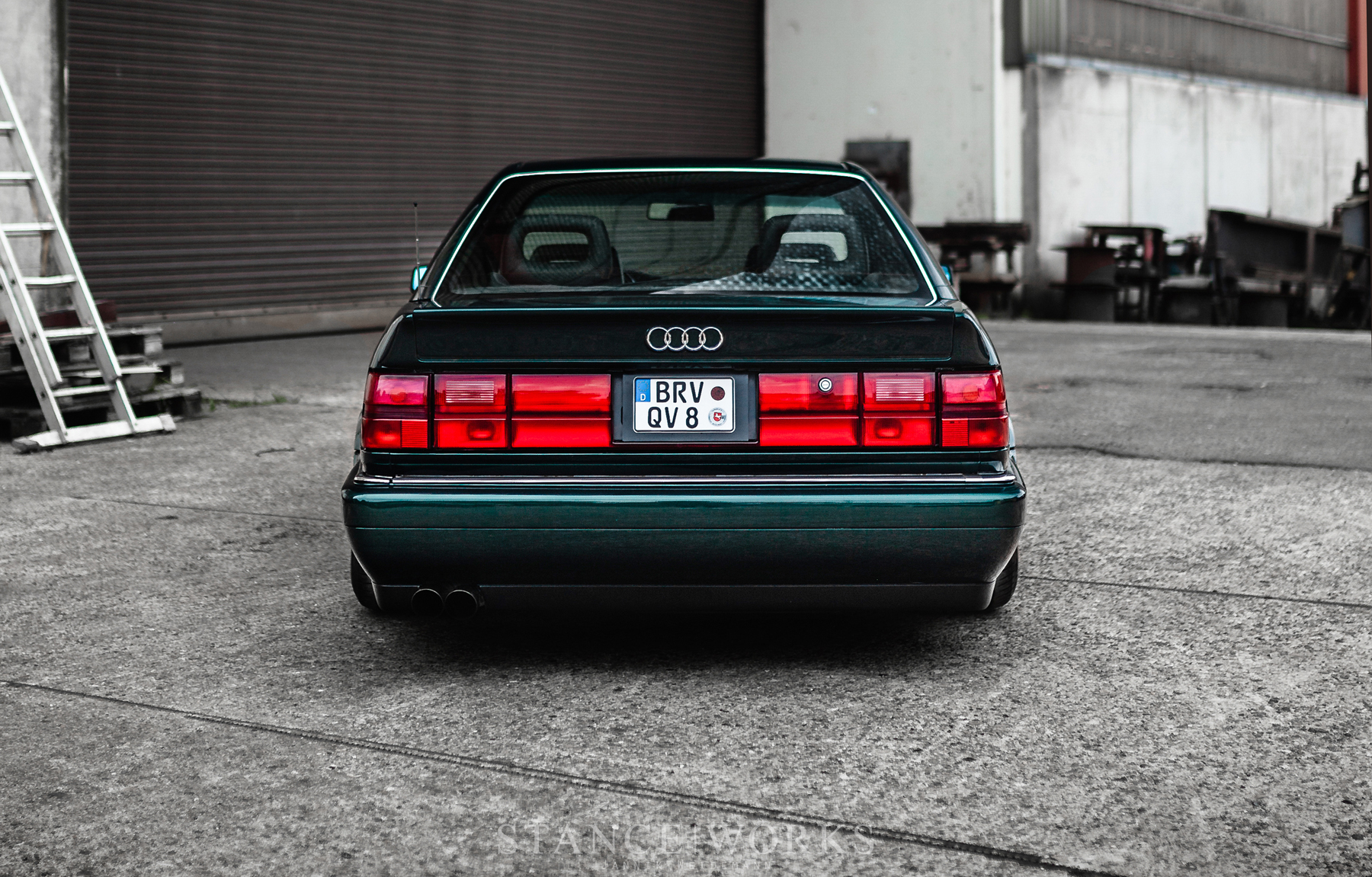 For Arne, though, simply looking good isn't enough, which spawned his quest for power. The Audi's 3.6-liter V8 now sports a Garrett GTX4088R, along with a MaxxECU and 630cc Bosch Injectors, amongst a slew of supporting mods. Together, the changes bump the V8's output from a once-impressive 247bhp to a staggering 505 horsepower at the wheels... all four of them. A 6-speed manual transmission gives Arne absolute control over the beast, too, making for a car that is sure to leave anyone at the stoplight rather surprised. 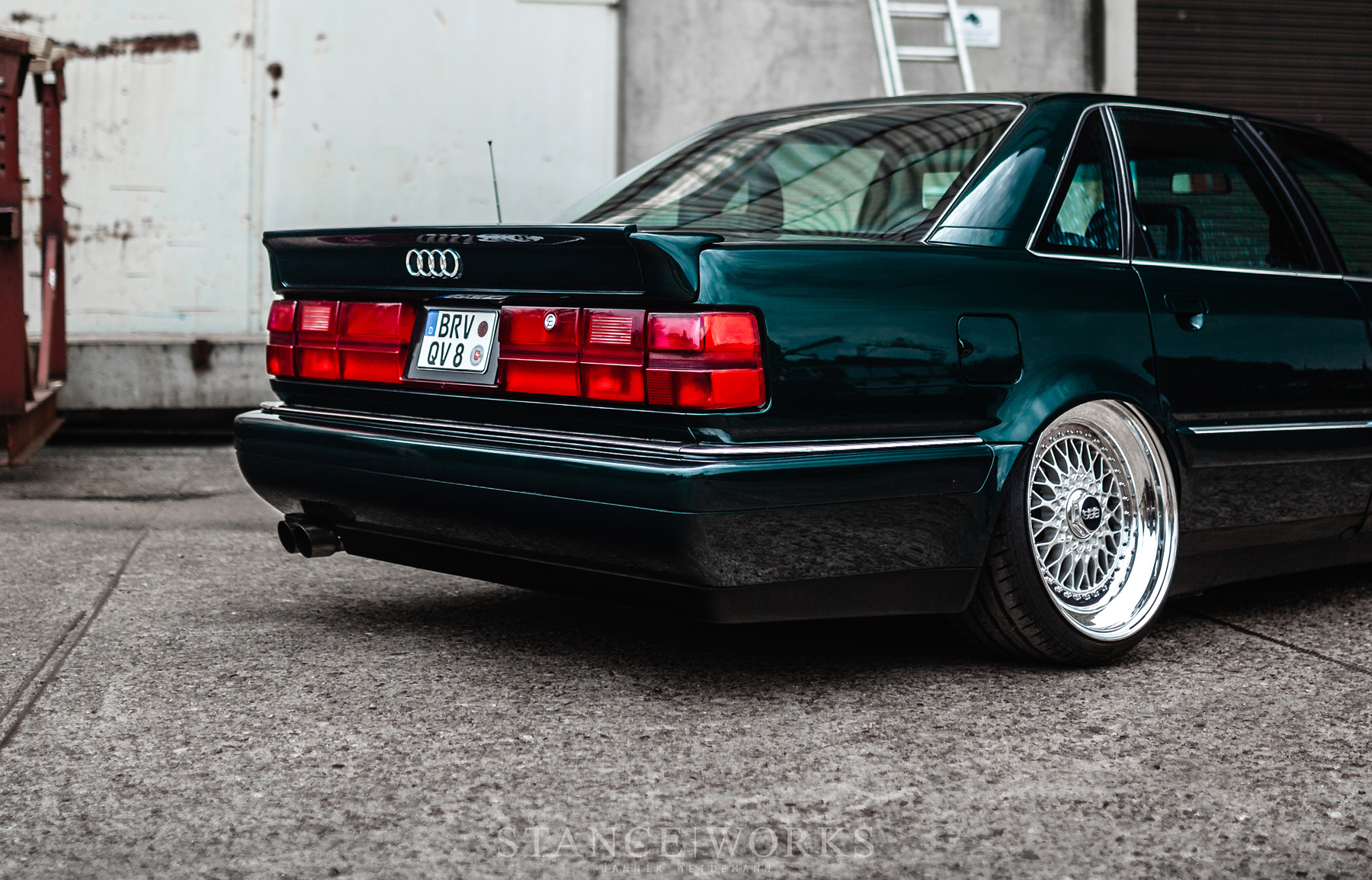 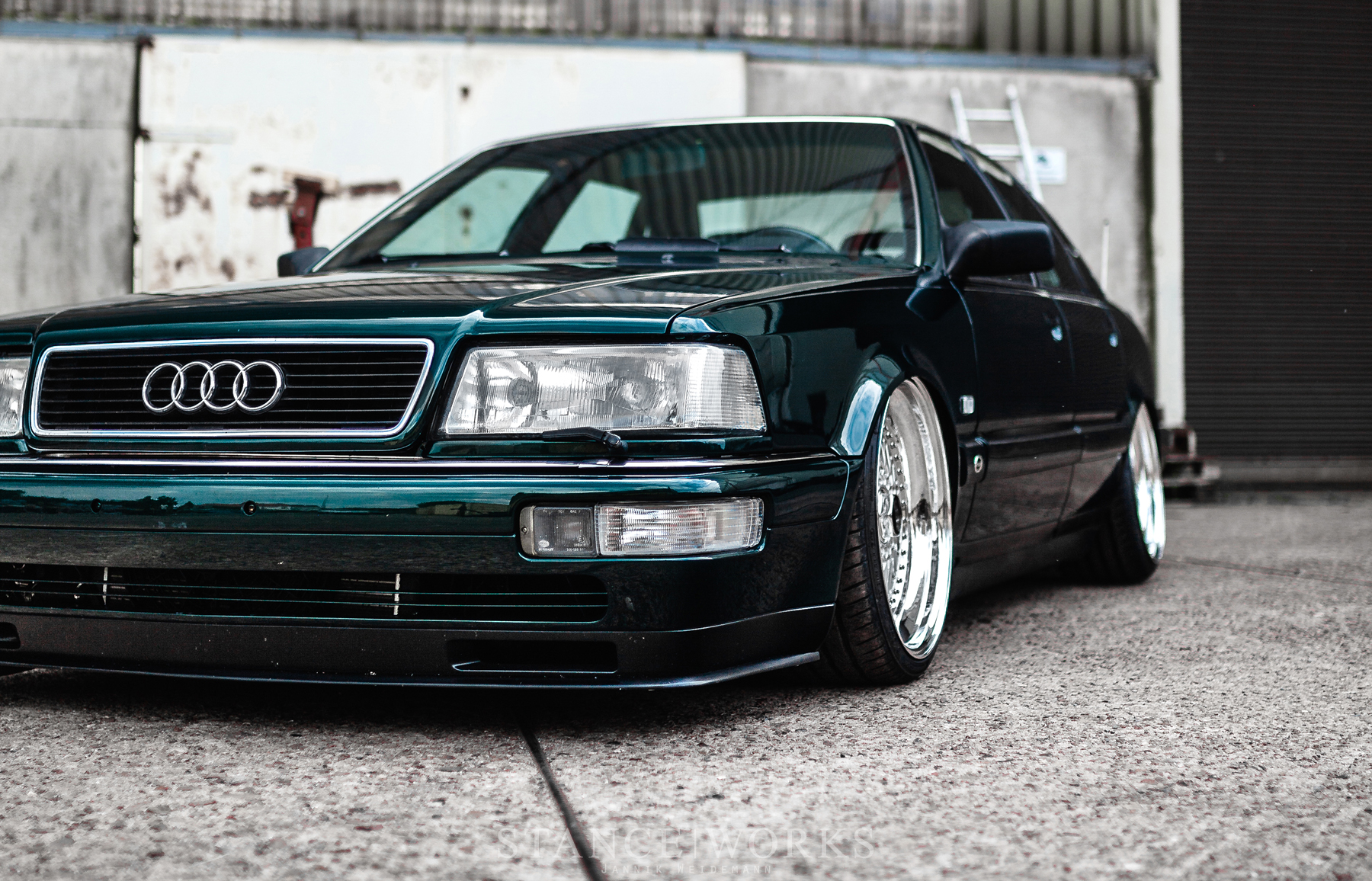 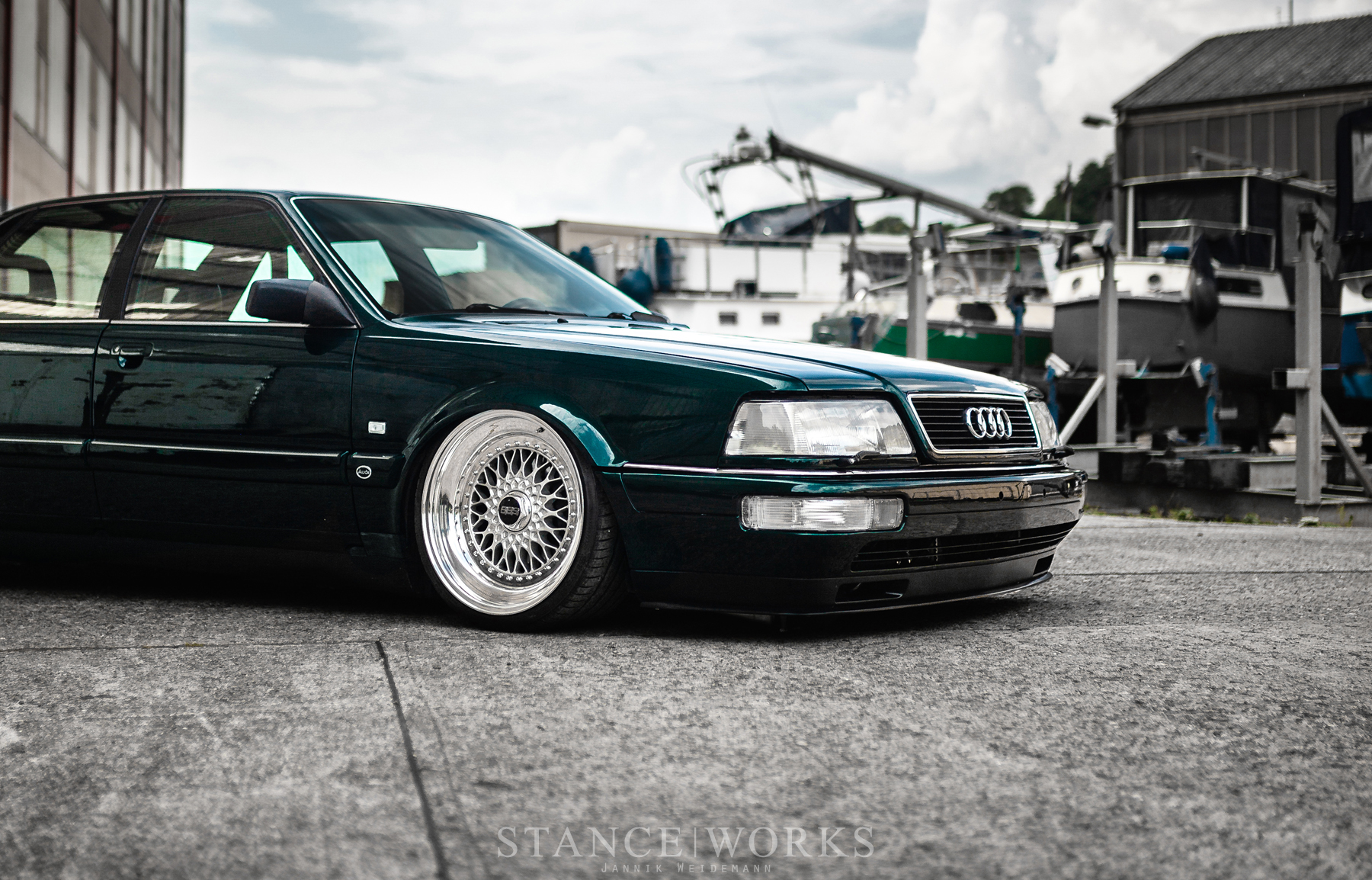 As an autobahn stormer in every aspect, it's a car that embraces its roots in seemingly every regard. Arne's 1991 V8 is a clear and concise precursor to what the Audi brand and "RS" lineup represent today, and if you ask us here at StanceWorks, it's a V8 that's exactly as it should be. 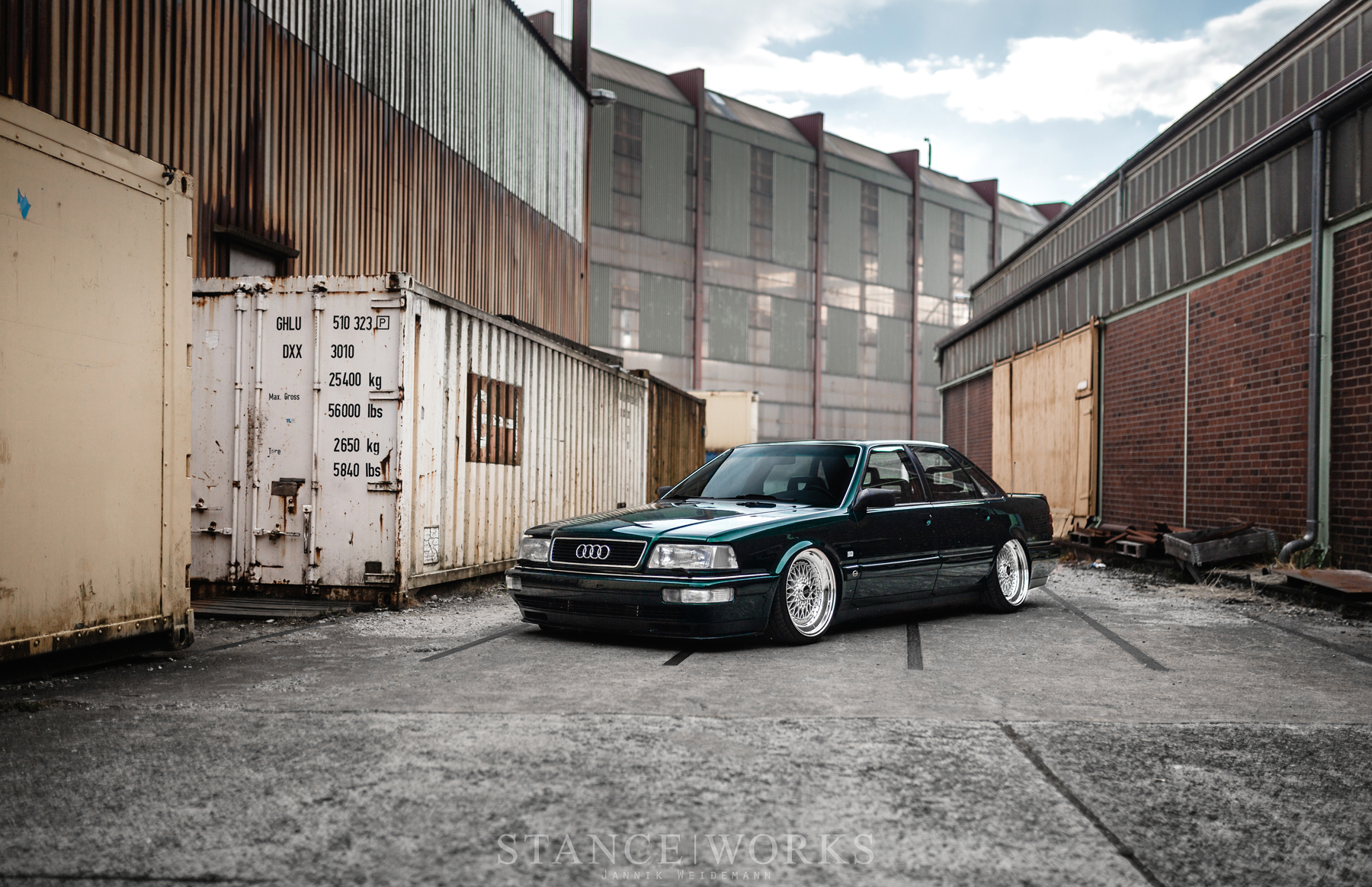