Images are from the collections of Matthew Litwin and Jim O’Clair.

This is Part Five in our ongoing series of “My First Car” entries, where the Hemmings editorial staff open up their photo albums and share personal memories. It features the Ford F-1 that left a permanent impression on Jim O’Clair as well as Matthew Litwin’s hand-me-down Datsun Maxima, a sports car stand-in with a durable diesel powertrain. 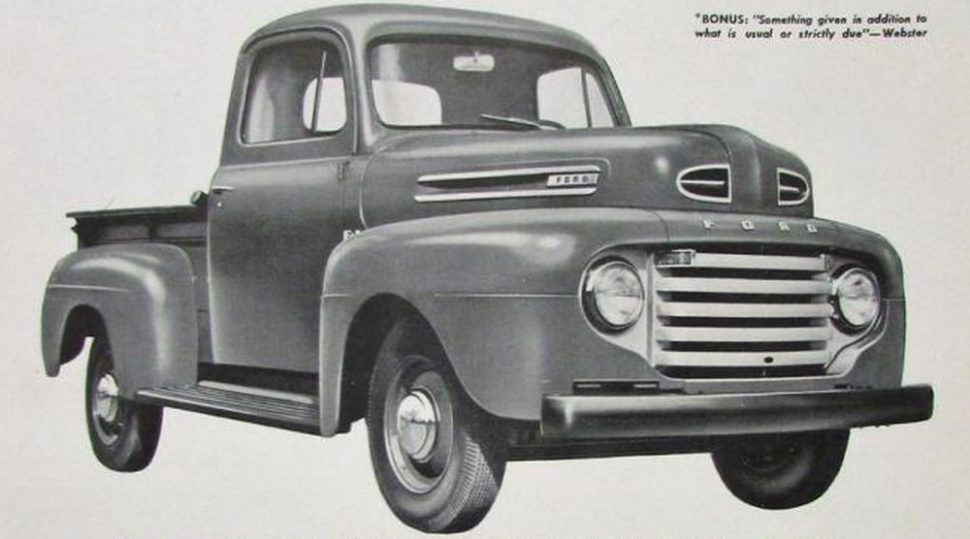 The firewood delivery truck that Jim learned to drive on looked like this, pre-flatbed modifications.

It would be hard to forget my first truck when I see myself every day in the mirror.

The first vehicle I learned to drive in was my dad’s 1949 Ford F-1 pickup. I don’t have any old photos of the truck anymore; they were destroyed in a fire at my parents’ house when I was in high school. It was also a vehicle that almost took my life.

I lived on a farm for most of my childhood with my parents and six siblings. The house was built in the 1860s and sat on 42 acres of fields and woods in Upstate New York. The farmstead also had a barn and several outbuildings. To supplement his income, Dad started a firewood business supplying local customers with cord wood and delivering it in our 1949 F-1. Figuring he could haul more with a trailer, he removed the box from the back, built a wooden flat bed with 2×6 lumber and added a pair of wheel wells over the axle.

On weekends, my dad and all three of us boys would go into the woods and cut fallen and standing trees. Mostly we were doing the loading and stacking, but my older brother and I were “paid” when he let us drive the truck back to the farm for lunch, or at the end of the day. At first, we could only steer and use the shifter from the center of the seat, but Dad eventually let us use the foot pedals as well, once we had the shift pattern and timing down; I was 12 years old at the time, and my brother was 13.

Once we got the hang of it, my brother would “borrow” the truck while Dad was at work, and of course I would go along for the ride around the property. We would both get punished when he got home that night and saw it wasn’t parked exactly where he left it, or noticed there was fresh mud tracks leading up to it. My older brother was responsible for 85 percent of the redness on my butt throughout our childhood.

That truck was also the first vehicle I assisted Dad in repairing. It had a 226-cu.in. L-head straight-six and three-speed transmission, and I helped with tune-ups, oil changes, rear-end service, and learning that sweet spot of exactly where to hold the lead-light so I could see, but Dad couldn’t. 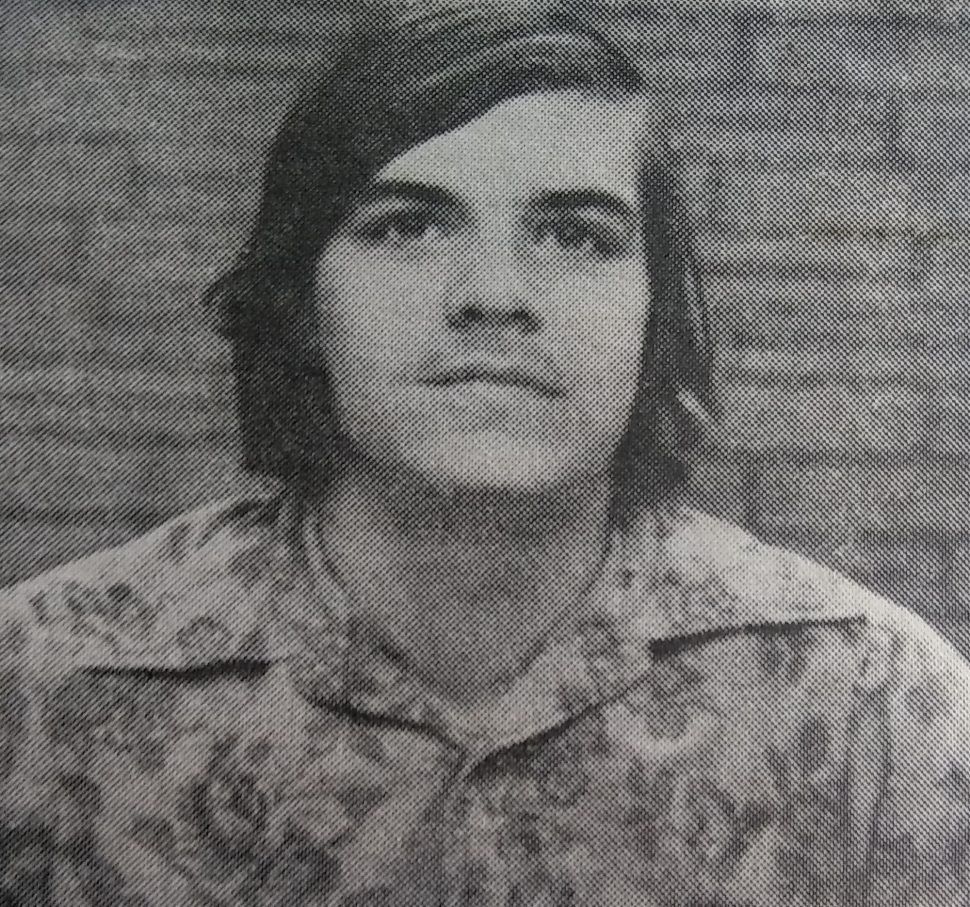 A young teenage Jim, notably not smiling a toothy grin.

One weekend in the late fall, we had worked all day to get two orders of cord wood ready for delivery by staging them inside an old unused chicken coop. On our last trip out of the woods for the day, Dad decided to drive, and the three of us kids sorted out which two would ride in the cab with him and who would sit atop the wood pile in the back on the road back to the house. I was the loser that day, so I climbed up on the log pile and my two brothers got in the cab. As we were riding out of the woods, my dad hit a huge rock on the side of the road and the truck slammed to the ground after getting close to airborne. The wood load was chained to the flatbed, which I was holding onto when the truck hit the rock.

I was knocked off the top of the wood pile and was falling off the truck, which was probably doing about 15 mph at the time. My foot got caught in the binder chain, and the rest of me landed on the ground, cushioning the fall with my shoulder and elbow. My dad had no idea I had fallen off and continued towards the house, dragging me about 100 feet before my older brother looked out the cab side window, saw me, screamed, and got Dad to stop. The binder chain, where my foot was stuck, had prevented my leg from being run over by the rear axle, and held it aloft as the truck dragged me through the leaves and dirt on the shoulder of the road.

I was pretty scraped up, but no major bones were broken. Along the way I had hit my face on a rock. I had a cut lip and had broken off one of my front teeth at the gum line, an injury that led to many dentist appointments, dentures, and eventually a crown on the adjacent tooth to fill the huge gap in the middle of my smile. I still have a small gap today, although it looks much better now than it did that day.

We continued to drive the truck and log the woods until the next year, when it was sold along with the house and property when my parents moved us all to suburbia to be closer to schools and activities. My dad still owned one three-acre plot from the original farmstead for decades after the sale, but never did get around to doing anything with it. We visited often and sometimes camped there, but the truck was long gone, either worked to its demise or sold off for restoration. 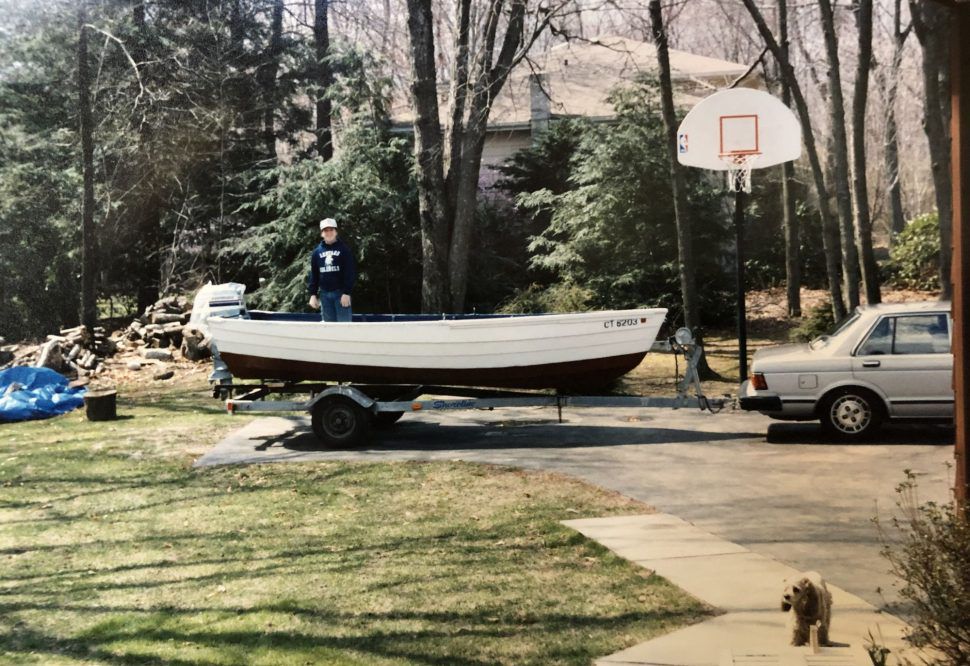 My first car wasn’t even mine—initially. It all started in the summer of 1982 when my parents realized that my brother and I were quickly outgrowing the confines of Dad’s Datsun 280-ZX. Approaching the age of 10, I already had an appreciation for the sports car’s cornering grip and acceleration… something my brother enjoyed as well, while Mom cautioned Dad about his well-established reputation among the local and regional officers. As you can imagine, it was quite a debate. What was both practical and powerful?

The answer came in the form of another Datsun (by Nissan): a 1983 Maxima. This wasn’t your everyday sedan shipped across the Pacific. Dad, ever the master of new car negotiations, special-ordered his with a slew of options, including the top-of-the-line stereo system, deluxe cloth upholstery, electric sliding sunroof, cruise control, power everything, and two-tone silver/gray paint. It was all nicely bundled around a straight-six diesel engine backed by a five-speed manual. That engine sipped fuel, but the torque it produced was enough to throw you into the seat and pull anything anywhere.

The Maxima was a faithful servant as both a daily commuter and vacation cruiser. Whether it was -10 degrees in the dead of winter, or 95 degrees in the middle of summer, it started on a single twist of the key. We had the glow plugs changed only once, and other than standard oil and brake maintenance, nothing failed on the car. Well, except the transmission. But that was because dad had power-shifted out of a toll booth in New Jersey as we sprinted to the NASCAR race in Delaware. He found its torque limit with a solid bang.

Somewhere around the 175,000-mile mark, Dad parked the Datsun for all but a few excursions. The folks had opted to keep it since I was on the verge of obtaining my learner’s permit. Although years of winter abuse were already exacting revenge on bits of the metal, the idea was that the Maxima would be a perfect first car for yours truly as soon as I earned a piece of plastic issued by the state of Connecticut that gave me open-road freedom. With a little luck, my parents felt it would get me through my first job and the remainder of my high school education.

Before my first day of commuting back and forth to college in Warwick, Rhode Island, I had already pushed the odometer beyond 200,000 miles, but not without a few hiccups along the way. Two drill bits gave their lives so I could wiggle a coat hanger through the unit-body structure to help secure the lower extremity of the right fender. My thought at the time: Why spend money on a welding job that could go toward pit passes at the race track? Or gas money for my boat’s outboard motor? I began to heavily invest in gray rattle can primer to hide the rust spots before date nights. The factory lug wrench was unceremoniously used to ensure the body wasn’t rubbing against the tires after a guide rail side swiped me. And a third drill bit disappeared from my dad’s tool box to help me re-secure the bottom of the left fender at 275,000 miles. The sunroof started to leak, primer wasn’t effective anymore, and the throttle cable stuck—only once—but the engine and transmission had not quit despite the constant burnouts I had mastered since age 16. I just loved the ol’ girl, but the writing was on the wall.

Despite the mountain of memories, during the early fall of 1993, I handed the keys to another eager 16-year-old about to get his feet wet behind the wheel of a diesel-powered Maxima; his father had an ’82, so it was a fitting sale. The odometer read 288,500 miles. Over the next two years, I’d catch a glimpse of my old flame, and to this day I wonder if it ever hit 300,000 miles.

What do you remember of your first car or truck? Share your thoughts in the comments.