At the height of General Motors’ dominance throughout the middle of the 20th century, executives rarely missed the opportunity to go all out at major expositions and even created a years-long traveling exhibition just for the company. And even though GM had entered one of its most turbulent times in the Eighties, it still had in it one more big showcase full of futuristic concept vehicles to help open Disney’s Epcot theme park.

While some histories of GM’s World of Motion pavilion at Epcot claim that the attraction arose from GM execs’ jealousy over the Magic Skyway ride that Disney designed for Ford for the 1964-1965 New York World’s Fair, that theory overlooks the fact that more than a decade had passed since the fair, as well as the fact that GM had its own exhibit there: the 110-foot Futurama exhibit hall, where GM debuted multiple concept cars created just for the occasion – concept cars that not only applied futuristic style but also, Norman Bel Geddes-style, envisioned how the automobile would become more integral in Americans’ lives in the coming future.

Instead, the idea of partnering with Disney likely arose more organically, especially once GM got wind of the mouse house’s plans for the Disney World-adjacent Epcot as a sort of combination world’s fair and technology showcase – pretty much exactly what the carmaker had already done in New York. And once again, GM took the opportunity to envision radical changes in the automotive landscape. 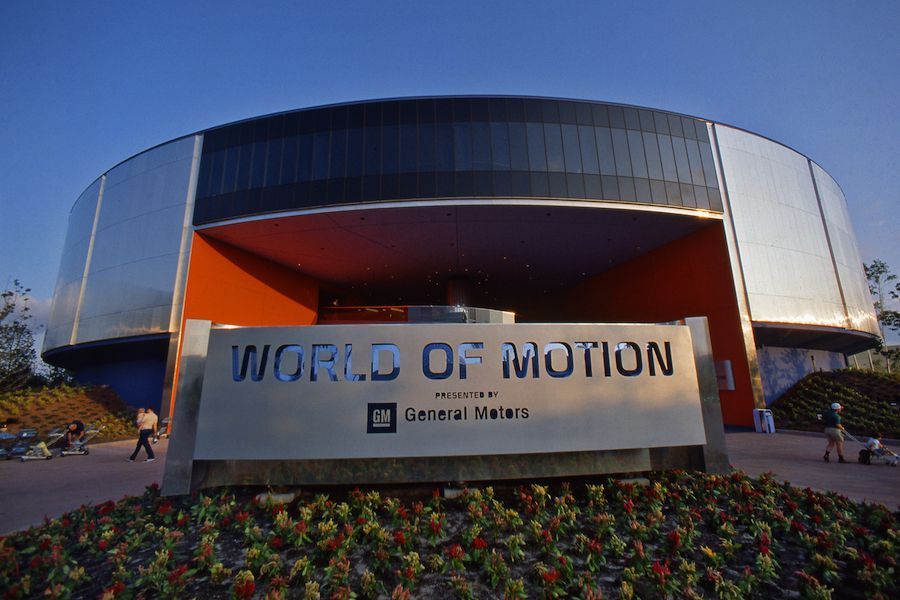 The two behemoths began to collaborate on World of Motion in 1977, envisioning it as a combination of a Disney-style ride—complete with animatronics and gags—and a display focused on the conception, design, and construction of cars of the future. As described in a pre-opening Epcot brochure, World of Motion would provide:

A kaleidoscope of lights from a futuristic cityscape sets in motion the grand finale of your travels through the Transportation Pavilion, presented by General Motors. The pavilion is large enough to cover all the Magic Kingdom’s Main Street, U.S.A., and presents one of the most whimsical road shows ever – a tongue-in-cheek adventure past the milestones of man’s ever-accelerating mobility.

The ride, designed primarily by animator Ward Kimball, is fairly well documented by Disney enthusiasts. The display, which GM had Bob Rogers design, had plenty to offer for automotive enthusiasts, including a replica of GM’s wind tunnel, an interactive display touting the importance of aerodynamic design, and a rotating cast of GM concept cars displayed almost exclusively at World of Motion.

When Epcot and World of Motion opened in October 1982, the attraction included two such concepts: Frank Winchell’s tilting three-wheeled Lean Machine in its narrow tail version and the Aero 2000. As with Ford’s series of Probe concept cars, the Aero 2000 was the second entry—after the Aero X sedan of the year prior—in a line of concepts intended to explore the limits of aerodynamic design in automobiles. While its overall shape differed little from its predecessor (pointy nose, sloping windshield, fastback ending in a Kamm-like tail), the Aero 2000 switched from a sedan to a coupe, added more wheel skirts and rounded edges, and ditched the steering wheel and pedals for a joystick mounted to the center console. Like the version of the Lean Machine on display, it was merely a push mobile sans engine, but in its materials on the car, GM claimed that a 65-hp experimental turbodiesel and a coefficient of drag of 0.23 would have combined to return 71 mpg in the Aero 2000.

The four-passenger subcompact was developed for display at General Motors’ “World of Motion” exhibit at Epcot Center as a symbol of the futuristic spirit of the popular new attraction… The “Aero 2000” features a number of technological advancements that may appear in production cars in the future. 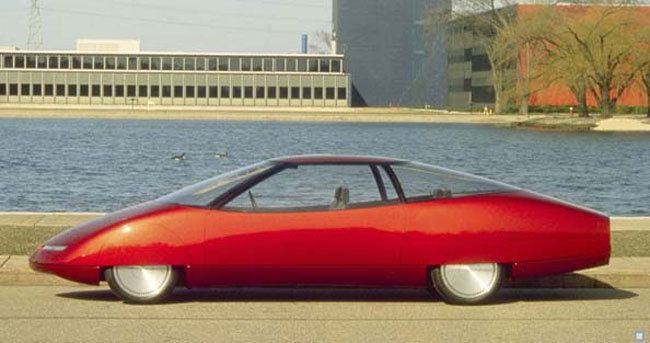 Among the concepts that followed those two at World of Motion were two direct successors to the Aero X and the Aero 2000. In 1983, the Irv Rybicki-designed Aero 2002 added a longer tail to the Aero 2000 for an even slipperier coefficient of drag of 0.14, reportedly the lowest that GM had seen up to that point in its own testing. (A subsequent evolution of the Aero 2002, 1984’s Citation IV, traded off its production-ready features like windshield wipers and exterior mirrors for a 0.265 coefficient of drag. It doesn’t appear as though the Citation IV made its way to World of Motion, however.) Then in 1988, GM added to the World of Motion exhibit the Aero 2004, a two-passenger mid-engine coupe with a sharper, more Pontiac-like nose and a number of intriguing features including removable roof panels, adjustable rear wing, and digital license plates.

At about the same time that GM added the Aero 2004, it also put on display three scale models of note. The unimaginatively named Van Wagon was similar in shape and concept to the full-size 1988 GMC Centaur cab-forward pickup while the Chameleon (presented alongside a larger wireframe version) seemed to blend in with the spate of youth-oriented dune buggy-derived concepts that would become all the rage the following year. According to a World of Motion brochure, the Chameleon was “a four-passenger RV that lives up to its name with dozens of double-duty features, inside and out. Detachable headliners double as sleeping bags. Seats as beach chairs. Headlights as flashlights. The Chameleon can even alter its color by changing thermoplastic body panels.” And then there was the 32-wheeled 50-passenger Wilderbus, which looked like it was lifted straight off the cover of a Fifties sci-fi adventure novel about exploring the moon.

At least three other full-size concepts, perhaps some of the most significant GM concepts of the era, joined World of Motion over the next few years. In 1990, GM added the HX3, a five-passenger hybrid minivan that toggled manually between electric motors and a 0.9-liter three-cylinder gasoline engine powering the wheels. Accompanying the HX3 was GM’s Impact, a fully electric concept that shared an electric powertrain with the HX3 and squished the latter Aero-series shapes down into a more compact form. Six years later, the Impact (designed in part by Paul MacCready, Dennis Little, and Mark Karki) begat GM’s short-lived lease-only EV1, the company’s first production electric vehicle and the subject of the 2006 documentary Who Killed the Electric Car? 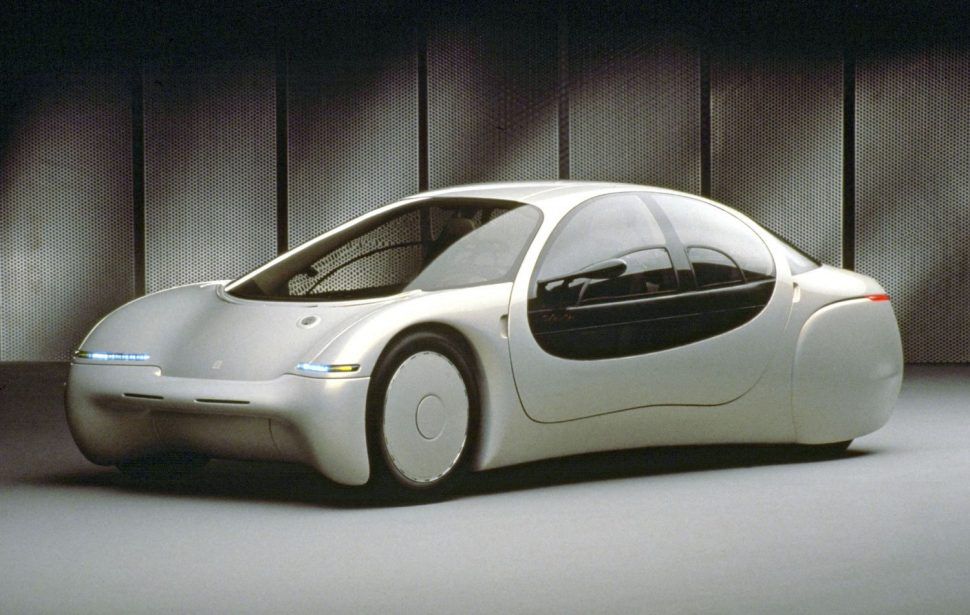 Then in 1992, GM added the Ultralite, its attempt at an ultra-fuel-efficient vehicle utilizing as many advanced materials and designs the company could throw at it. It derived its name from the 420-pound carbon-fiber monocoque that offered the stiffness necessary for the single massive gullwing door on either side. And rather than use the lightness of the monocoque to offset heavy battery packs, GM’s engineers powered the rear wheels with a 1.5-liter three-cylinder two-stroke engine housed in a detachable pod at the rear of the vehicle. The light weight, the small engine, a host of electronic features designed to trim fuel consumption, and the 0.192 coefficient of drag all combined to return 80 miles per gallon in the Ultralite. As with the Lean Machine (and the HX3 and multiple other GM concept cars of that era), GM provided multiple copies of the Ultralite to the production of the 1993 flick Demolition Man to serve as typical vehicles of the year 2032.

The above is hardly a comprehensive list either. From various materials, we’ve gleaned that GM displayed at World of Motion the Oldsmobile Aerotech II concept, a scale model semi dubbed the Aero Freighter, and numerous other models, wireframes, and clays.

The Ultralite would end up being the last major concept car displayed at World of Motion; in 1992, GM executives decided not to renew the company’s 10-year contract with Disney and instead negotiated one-year contracts through 1995. For 1996, GM and Disney jointly agreed to gut World of Motion and replace it with Test Track, which replaced the physical concept cars with digital simulations when it opened in 1999.