Ford built fewer than 5,000 roadsters in 1933, less than half the number of the coveted 1932 model. Even when you rope in the nearly identical 1934 roadsters, original sheetmetal is hard to come by, and maybe a bit heretical to chop. Fortunately for the hot-rod community, there are ample ways to get a brand-new body. Five-door, coupe, or roadster; fiberglass or steel; and any level of do-it-yourself or farm-the-work-out-to-professionals—there are a lot of choices. Only one of these options, though, is a steel-bodied roadster with a full convertible top. That’s American Speed Company and its Speed33.

And speaking of that convertible top, the Speed33 (yes, no space so it can be trademarked) has a connection to one of the biggest names in the history of convertibles: ASC. That other ASC was American Specialty Cars, although you might know it better by the pre-2004 name of American Sunroof Company. ASC was the go-to company for factory convertible conversions for decades (not to mention some sweet ASC/McLaren collaborations like the Buick GNX, Pontiac Turbo Grand Prix, and a Fox-body Mustang and Capri). Remember the Dearborn Deuce reproduction body? Mark Trostle was on that project when American Specialty Cars built 300 licensed remakes based on the 1932 Ford. As a follow-up, he founded American Speed Company in 2007 after 34 years at ASC, to build the Speed33. 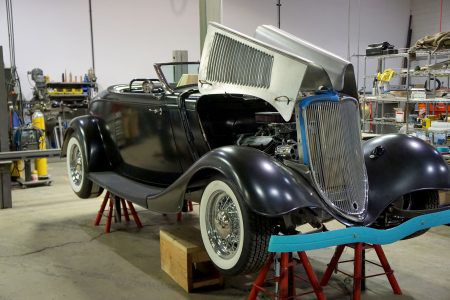 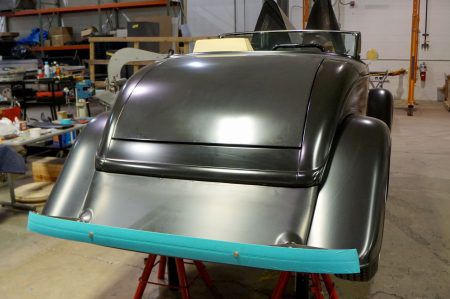 A work in progress, soon to be shipped to the customer for paint and final assembly.

Trostle sold American Speed in 2017 and Phil Davie, who came on in 2010, bought the company from the second owners last summer. With more than 20 years in the automotive industry, Davie continues the precision engineering approached started by Trostle. The appeal of the Speed33, Davie explains, is the level of engineering that goes into it. The body and frame were developed with computer-aided design software, just like with an OEM design. The stampings, which are 18-gauge steel sourced locally, are laser cut. Extra reinforcement in the frame helps maintain rigidity as well as ensure consistent panel fit. Davie also notes that the accessory pieces, like the fenders from United Pacific, are similarly precise in terms of quality and fit. Previously, American Speed had to do finishing work on those parts, deburring holes or tweaking the alignment. The UPI stuff, he says, pretty much bolts right up. 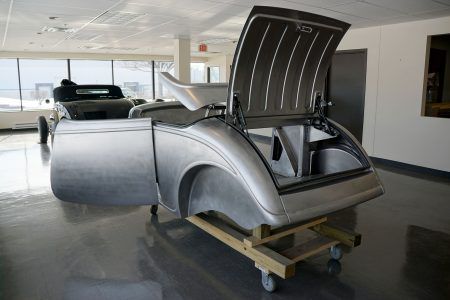 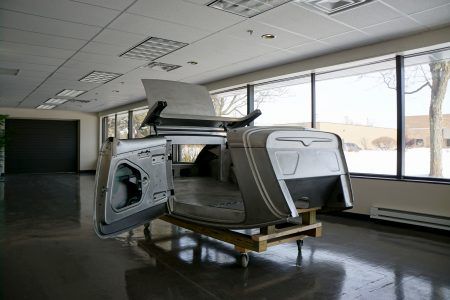 Of course, whether or not to get fenders depends on the individual builder. The common items on the Speed33 are the roll top and the integrated, power side windows built into the doors. The rest is based on a template that allows for almost endless levels of customization, but also makes for easy repairs, replacement, or upgrades. The body fits an original frame, or a custom American Speed chassis allows for pretty much any suspension setup from leaf springs to double-wishbones and coilovers. And there’s room for almost any V-8—the design differs from the original with a redesigned firewall and extra wheelbase in front of the body (the doors are also stretched, to provide more legroom in the cabin). The goal, says Davie, is to avoid the extra trouble that comes with one-off fabrication. 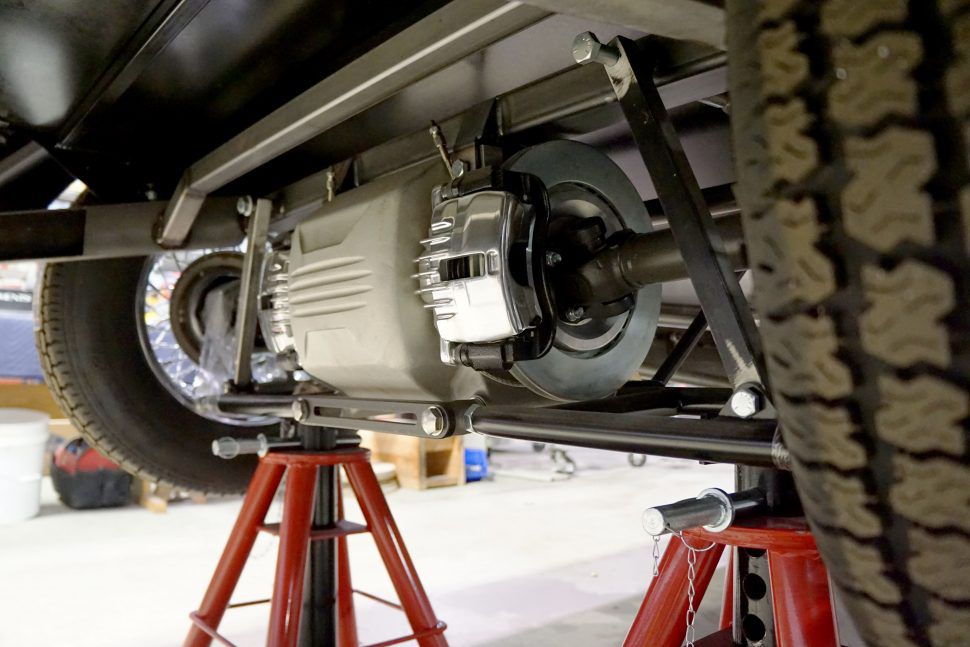 A few more than 150 Speed33s have been made so far. Each one is built to individual specification, and typically about 80 percent of the work is done at American Speed before shipping everything to the customer (or the customer’s preferred shop) for final assembly. That includes everything from mounting the suspension to interior trim, but leaves detail work like countless hours of paint prep and the repeated assembly and disassembly that goes along with it. That’s not just for efficiency, says Davie, because car projects like these are usually deeply personal and the final stages are best done somewhere with the owner close by. 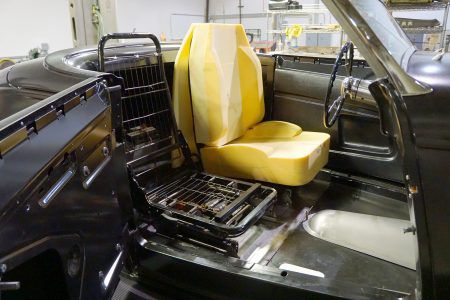 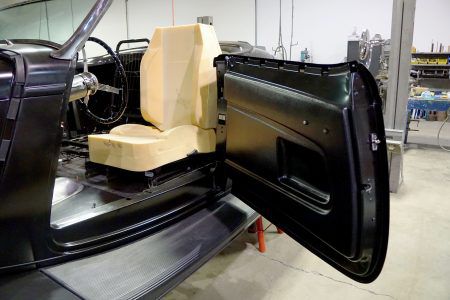 The interior is wider and longer than the original ’33 Ford. American Speed Company offers door cards and can trim out the seating, upholstery, and interior to the customer’s specfication.

The standard body for the Speed33 costs $29,750, which includes the convertible top, weather seals, power windows and doors, and curved-glass windshield. A basic body and top frame, without the trimmings, can also ordered for $22,000. American Speed also sells several accessories like grilles, hoodset, and instrument cluster packages. Lead time is typically between 8 and 12 weeks, says Davie. To learn more, check out American Speed Company’s website. 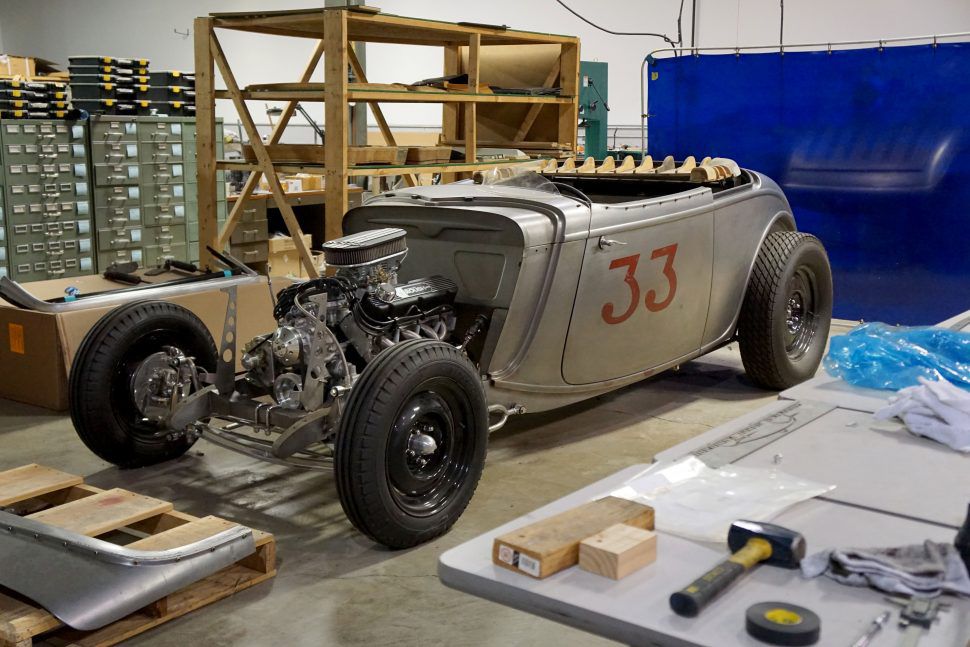