Back in the dim-and-distant 1970s, full-size 4×4 pickups with solid front axles roamed the Earth and everything was good. They were simple, cheap, durable, and easy to work on. (As a matter of fact, they still are.)

But a funny thing happened between 1973 and 1978: U.S. sales of light-duty four-wheel drives went bonkers, growing from about 312,000 trucks industry wide to 992,000, five years later. At Ford, the increase was even more bonkers. Dearborn moved about 67,000 light-duty 4x4s in 1973, but that number soared to 317,000 by 1978. Who were these truck buyers? Not landscapers, remodelers, or tradespeople, according to Ford, but folks participating “in an expanded outdoor lifestyle.” These outdoorsy weekenders were trading in their station wagons or two-wheel drive trucks on 4x4s, but they didn’t expect to sacrifice any ride quality, handling, or comfort. At the same time, federal fuel economy standards were ramping up for light trucks with gross vehicle weight ratings of 8,500 pounds or less. By the mid 1980s, four-wheel-drive light trucks would have to be capable of 18-19 mpg. 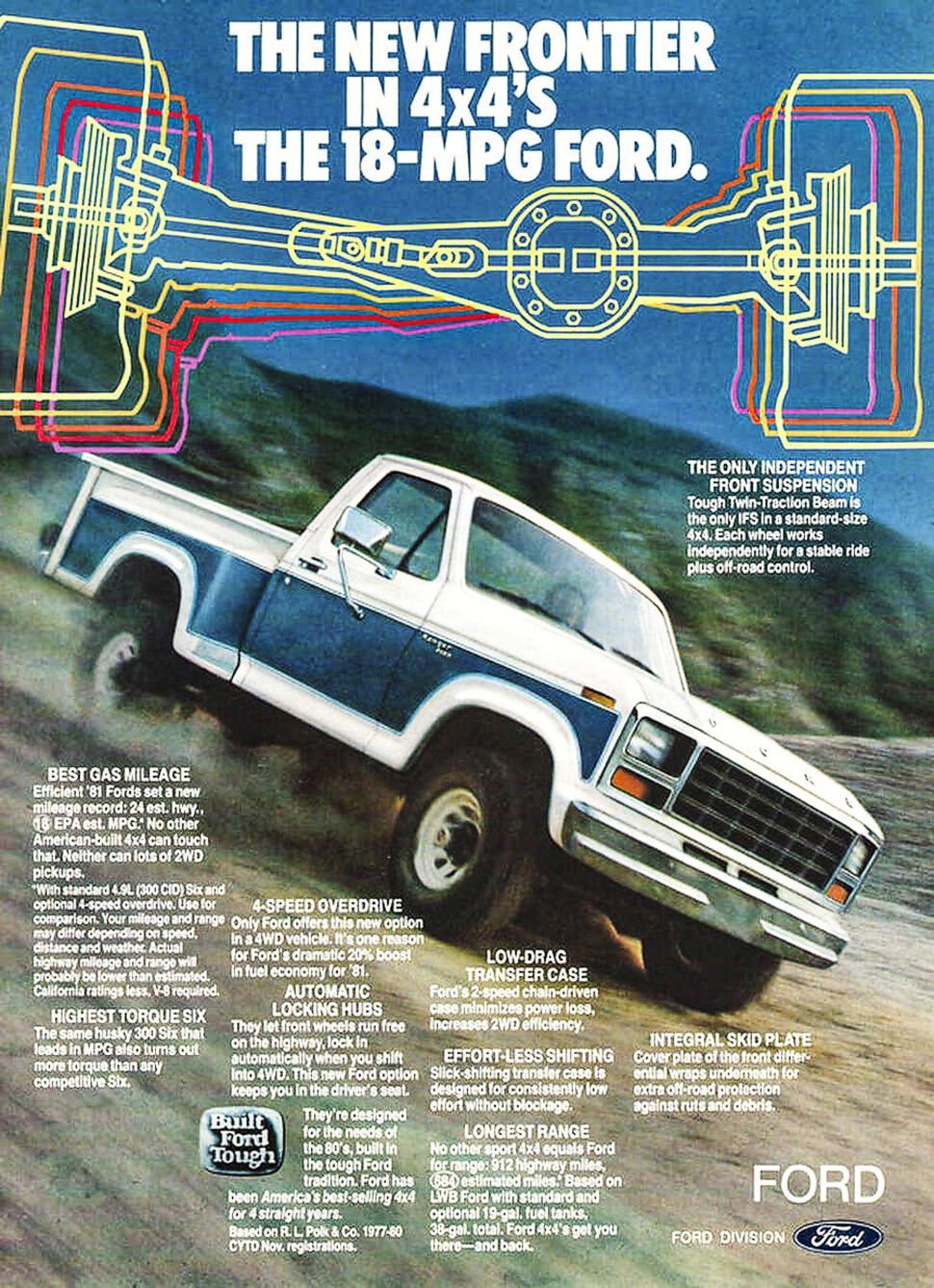 Faced with the need to make trucks more car-like for the 4×4-hungry masses as well as more fuel efficient, Ford engineers took a hard look at that solid front axle. It was heavy, and forced the truck to sit higher, so that the oil pan would clear the differential when the springs compressed—both of which affected fuel economy. The tall ride height also made driver/passenger ingress/egress more difficult and raised the center of gravity, making light trucks tippy, too. Ride and handling was also sacrificed with a solid front axle, which is why most light-duty two-wheel drives went to independent front ends in the 1960s.

Starting in ’65, Ford two-wheel drive trucks used the Twin I-Beam design, which split a solid axle into two parts, each hinged on a pivot mounted to the engine cross member and suspended with a coil spring.

So, what if a driving front axle could be designed to replicate the Twin I-Beam? In addition to lowering the truck’s center of gravity, improving ride quality and handling, what if this new axle could offer some weight savings and even share some parts with the Twin I Beam two-wheel drives?

Enter Twin Traction Beam—a way for Ford to offer IFS in full-size trucks without straying too far from its tried-and-true components. The setup was designed by Ford Engineers Donald Wheatley and John Richardson, who were first granted a patent, US3948337A, in 1976.

But the production version, manufactured by Dana, was the result of discoveries made over five design stages after that initial patent. The fifth generation, production TTB axle used a pair of stamped steel arms that pivoted from mounts attached to the engine cross member, like Twin I-Beam arms. On half-tons, like Broncos and F-150s, coil springs provided the suspension, while on F-250s and 350s leaf springs were used. The front differential (an 8.5-inch Dana 44 in the F-150, F-250, and Bronco, or a 9-inch Dana 50 or 60 on the F-350) was mounted to the left arm, while a U-joint mounted on the end of the right axle provided the hinging action. A slip joint (or slip yoke), mounted outboard of the U-joint, allowed the axle shaft length to change as the wheels moved up and down through the suspension travel. The left TTB axle arm served as the cover for the differential as well as the housing mount, while the right axle beam had a window in it that allowed the right axle shaft to pass through. Both axle arms were attached to radius arms in the rear that kept them located. 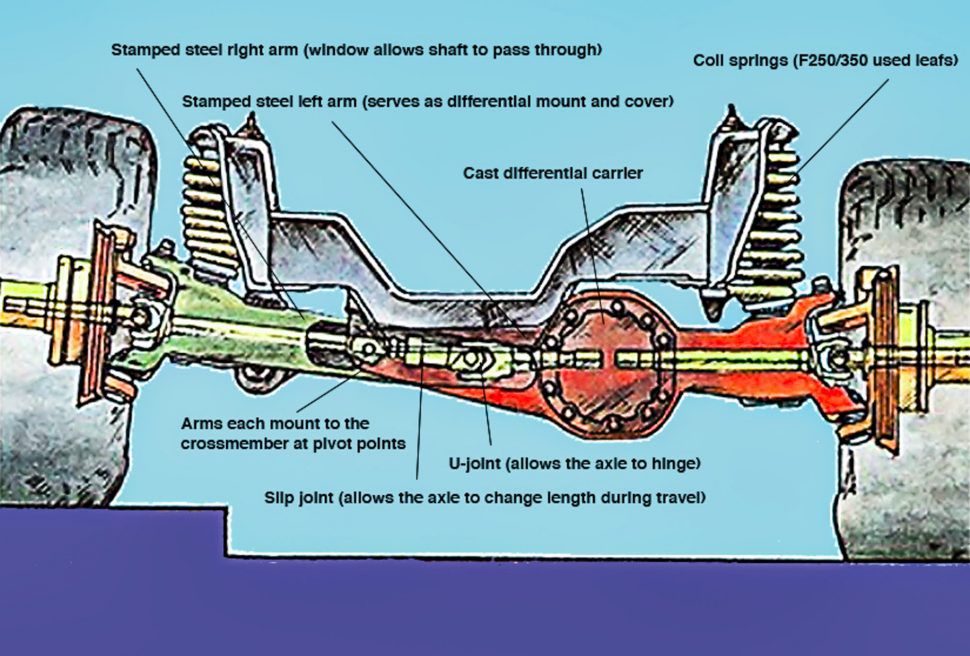 TTB was an elegantly simple solution for the time and it helped Ford achieve its many objectives for the 1980 model year, when its redesigned light trucks were unveiled. The half-tons (F-150 and Bronco) were 2.3 inches lower than their predecessors which helped in the wind tunnel, improved their handling, and made it easier for driver and passengers to climb aboard. Unsprung weight in the half-ton TTB-equipped rigs was lowered by 154 pounds, largely because of a reduction in the amount of cast iron and forged steel used in the front axle. The TTB design also allowed Ford to share crossmembers, pivot brackets, pivot locations, and coil springs among two- and four-wheel drive light trucks. The 4×4 half-tons even shared their radius arms with the two-wheel drive F-250.

The TTB axle has taken its share of guff from hardcore off-roaders who prefer straight axles, but in stock form, it’s dirt reliable and simple to repair. Due to the sheer number of Ford trucks made with TTB from 1980-’97, parts are plentiful and cheap today, plus the knowledge base for this innovative design runs deep. 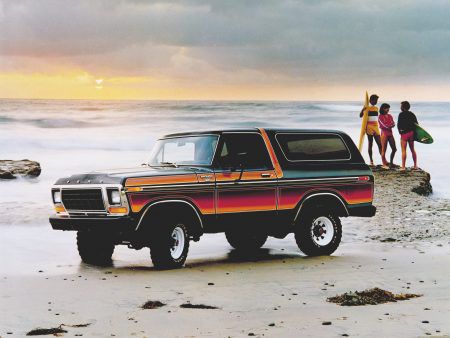 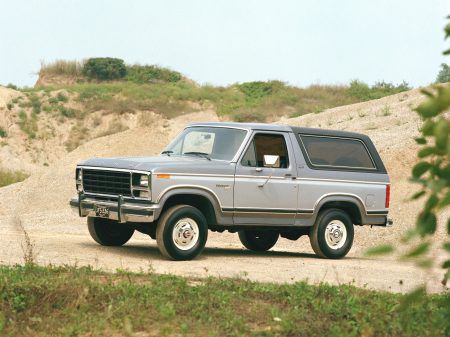 For visual comparison, a 1979 Bronco (sundown stripes) with the solid front axle and 1981 Bronco (grey) with TTB.