Sergio Pininfarina. Images courtesy of Pininfarina except where noted.

Pininfarina is, perhaps, the best known of the dozens of Italian carrozzerie that sprung up near Turin in the first decades of the 20th century. These coachbuilders developed in order to design and fabricate bodies for the motor vehicles being built by the local, nascent automotive industry. Founded by Battista “Pinin” Farina in 1930, the shop may be most famous for its long relationship with nearby Italian sports car manufacturer Ferrari, for which it acted as a de facto design franchise from the 1950s until the 2010s, when the prancing horse brand moved these activities in-house. But, during its nine decades of existence, Pininfarina crafted literally hundreds of concept and production vehicles for dozens of other manufacturers, from the quotidian to the quixotic.

With the 90th anniversary of the consultancy being celebrated this year (on May 22), we decided to create our own list of the nine non-Ferrari cars—one from each decade—that best personify for us the Pininfarina ethos of “Above all, it must be beautiful.” 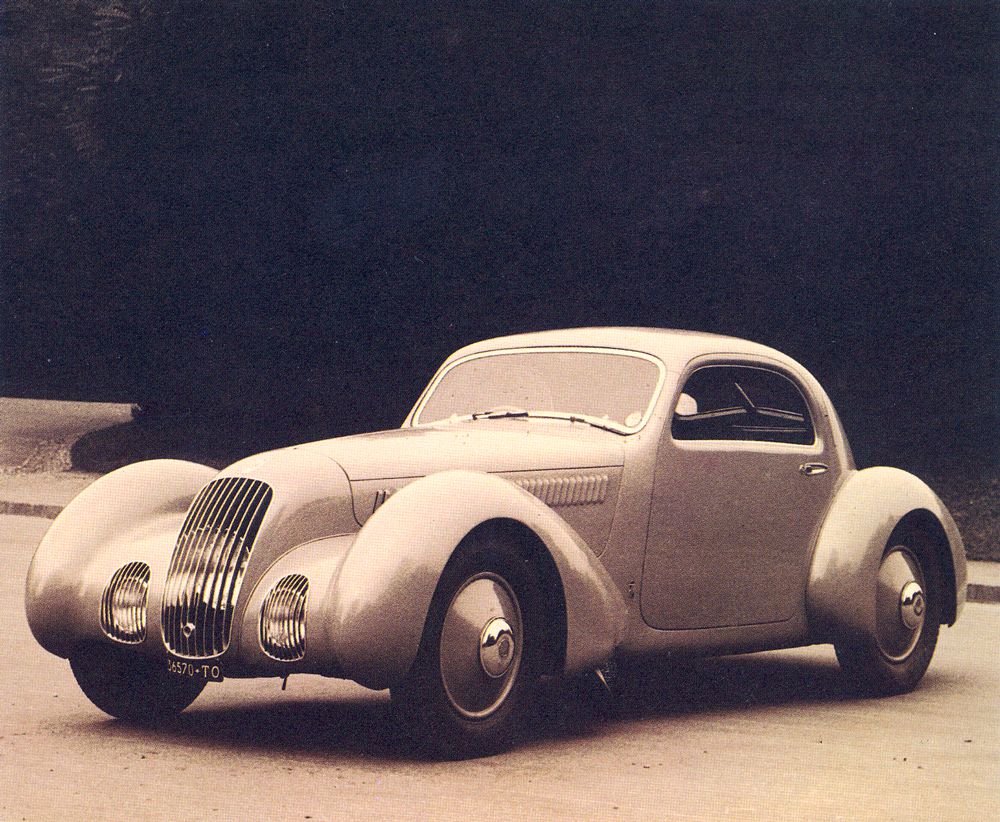 From the very beginning of its existence, Pininfarina recognized the need to create truly capital-M Modern design. While Henry Ford was still building Model A’s that resembled upright, horse-drawn carriages, Battista was experimenting with wind-cheating teardrop shapes. The name of this Alfa Romeo signifies that it has a double overhead cam straight-six engine with a pair of carburetors (named after a winning setup at the races in the Adriatic seaside town of Pescara.) But it’s its radical body that is most noteworthy, a broad and low form, featuring windswept fenders and windshield, a tapered rear, and headlamps hidden behind recumbent grilles. 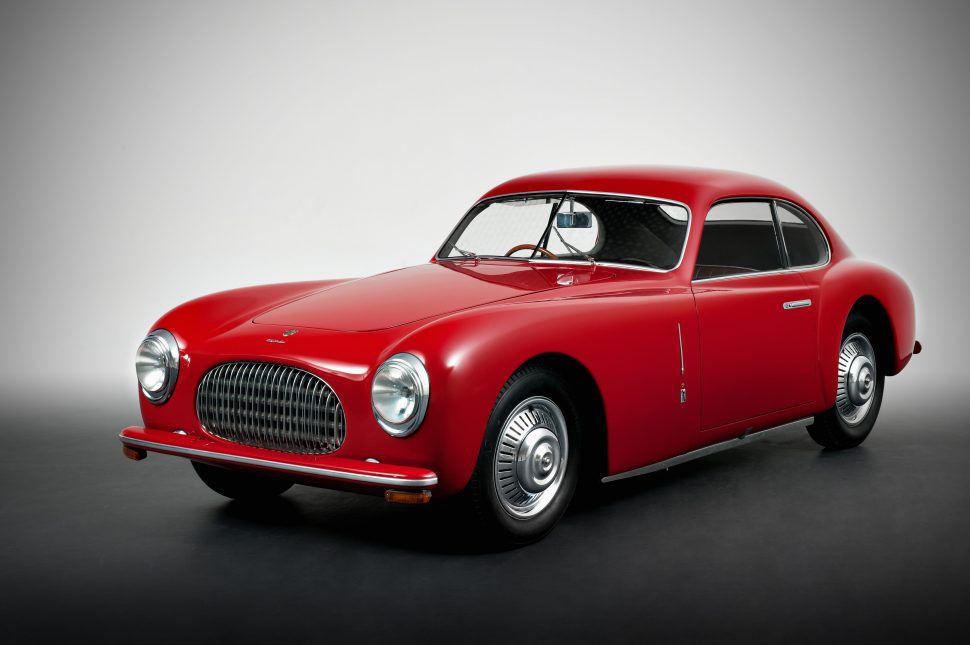 In the immediate postwar era, as Italy attempted to rebuild its economic and political systems post-Fascism, Pininfarina brought to coachbuilding a new idiom. Its body for the boutique Italian sportscar manufacturer Cisitalia is widely viewed as the progenitor of all postwar grand touring vehicles, with a long hood, tight cabin, and short deck, enunciated by taut bodywork that communicates the vehicle’s desire to be lunging forward. This car was included in the foundational car-as-sculpture exhibit “Eight Automobiles” at New York’s Museum of Modern Art in 1951, where the catalog copy venerated its handsome body as telegraphing “an extraordinary tension, as though its metal skin did not quite fit over the framework and had to be stretched into place.” 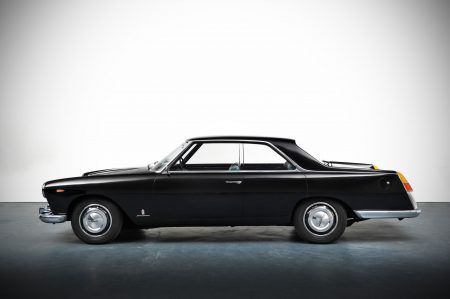 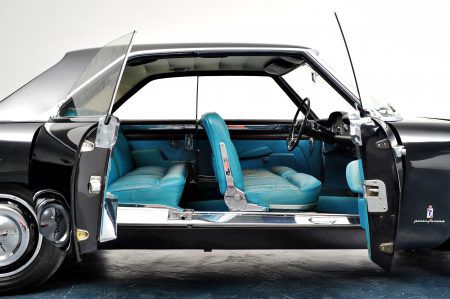 Having invented the tucked and rounded “pontoon” shape that came to dominate postwar sports car design, with the aforementioned Cisitalia, Pininfarina literally went back to the drawing board to create this crisp, fresh luxury coupe concept for innovative Italian marque Lancia. It is impossible to not see the entire history of 1960s car design—especially the imposingly optimistic, slab-sided work of Bill Mitchell (GM), Virgil Exner (Chrysler), and Elwood Engel (Ford)—in this taut, pillarless hardtop coupe, with its thick C-pillar, and horizontally-creased fuselage. (And its hidden rear suicide door is almost magical in its integration.) So sophisticated was this design, that Battista himself favored this car, driving it until his death in 1966. 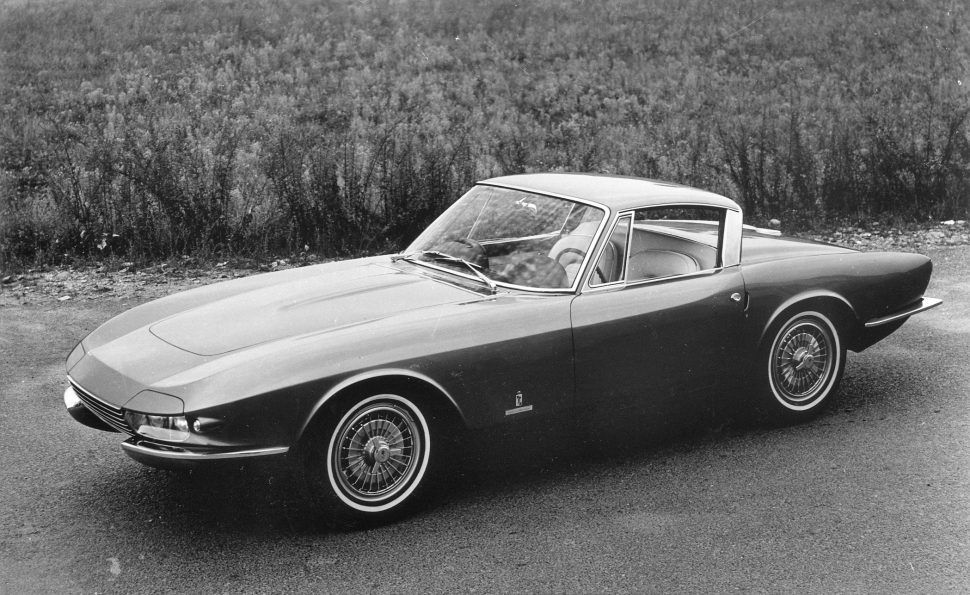 Pininfarina broke into the all-important American marketplace with a design for a 1952 Nash-Healey Roadster. It then set out to Italianize the rest of Detroit. As the C2 Corvette was just being introduced—in all of its chrome-daggered, boat-tailed, split-windowed, shark-bodied menace—star Pininfarina designer Tom Tjaarda sent Chevy this one-off ‘Vette variant that looked like it had just danced in from the Riviera in a Brioni tuxedo. Featuring low and lidded headlampds, a bubble-back rear windshield, tapered taillamp enclosures, and an angularly pinched rear, it imagined an alternative, elegant, grand touring branch of the Vette family that Chevy never knew existed. 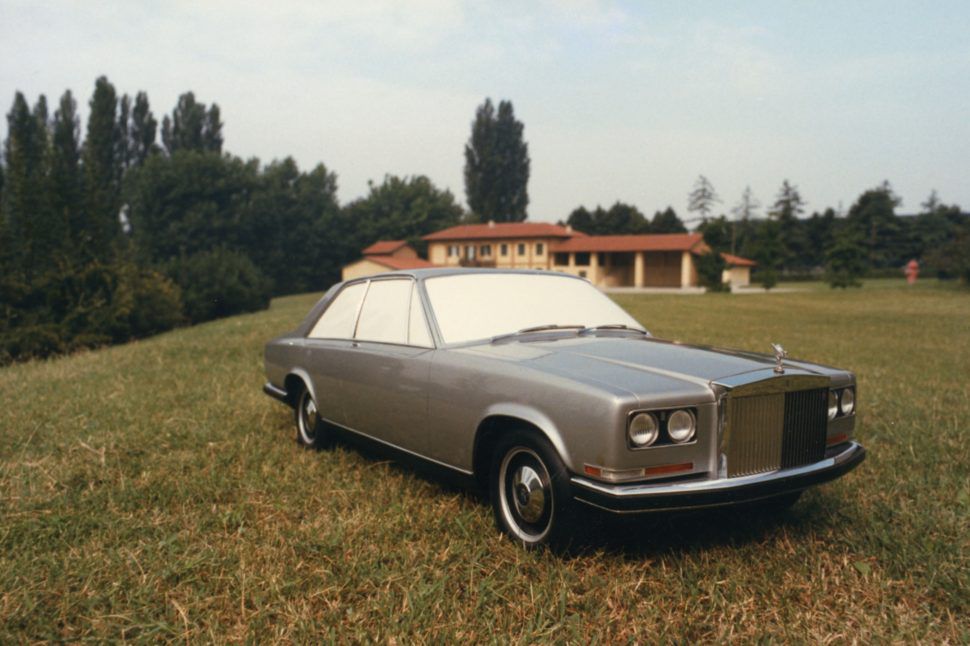 Not even the Brits could resist the allure of expert Italian design, which is how the Camargue became the first-ever Rolls not drafted in the United Kingdom. The results were somewhat controversial, with its broad body, long rear overhang, and inset wheels resulting in a look that appears slightly ungirdled to some. But there is no doubt that it broke the brand out of a reliance on a stifling baroque traditionalism it had been practicing since the turn of the century, and paved the way for its more brutal Oughties incarnation under ownership by BMW. You are welcome to disagree, but we think its domineering crispness has aged quite well. 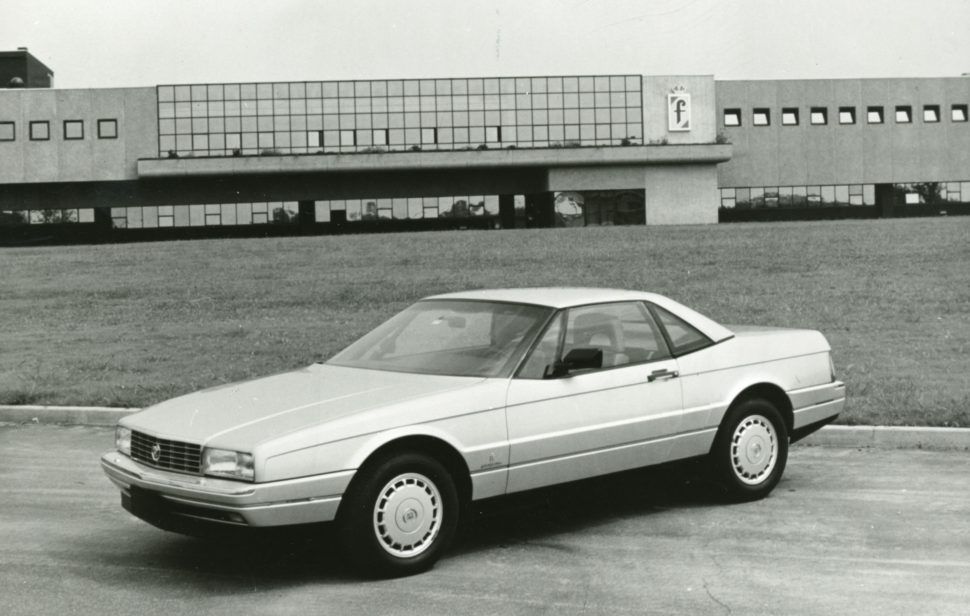 General Motors could not have conceived of a less profitable method for building its first attempt at a competitor for the venerable Mercedes R107 SL, a plan that involved Caddy and Pininfarina taking turns flying parts back and forth between Turin and Detroit on a fleet of specially designed 747s. (It might, however, have taken the time to prevent the myriad electrical and mechanical problems that cropped up.) But despite being built on a shortened, front-wheel-drive Eldorado chassis, the Allanté has debonair proportions and an intriguingly angular and sectioned body that seems like a presaging of Benz’s own blunt R107 replacement, the R129 of 1989.

Pininfarina designed the two-seat, mid-engine convertible Beat for Honda as a hired gun. But given Honda’s proud culture of innovation, the design wasn’t put into production until the Japanese car company purchased it outright. This doesn’t matter. The Beat is both adorable, and aggressive. This is typified by its backswept and teardrop-shaped wheel openings, its coved flanks feeding air into a high revving (8500 RPM) naturally aspirated three-cylinder behind the driver’s head, its demented-eyed taillamps, and its zebra-striped interior. The Beat led a trend of tiny sports cars in Japan, all of which took advantage of local engine size-based tax laws (the Beat’s motor displaced just 656 cc.) It was not fast, but it was furious. 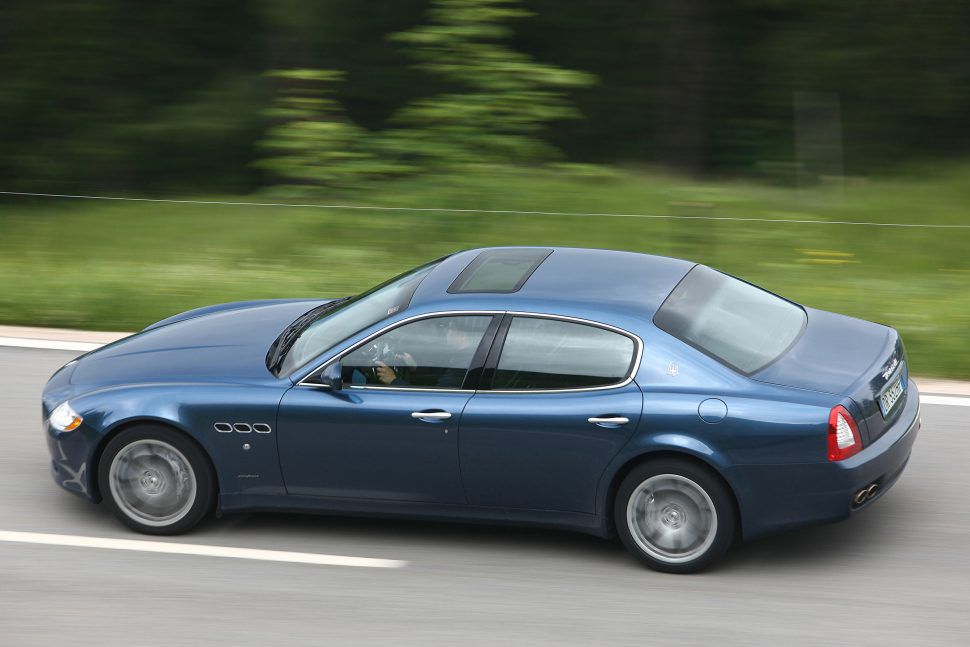 The Oughties saw Pininfarina expand its empire to assist emerging manufacturers in China and Korea. But it seemed to save its most sensual four-door design for the re-launch of Turinese neighbor Maserati’s grand, if overtly named, Quattroporte. Having worked through the roster of local carrozzerie—Frua, Bertone, Italdesign—in previous iterations of the car, the trident brand came to Pininfarina for the launch of the fifth generation QP. Pinin delivered, with one of its handsomest and most sensual sedan designs, simultaneously curvaceous, protuberant, timeless, and à la mode, with a rich leather and wood interior. Did we mention it had a deliciously bombastic Ferrari V8 under the hood? 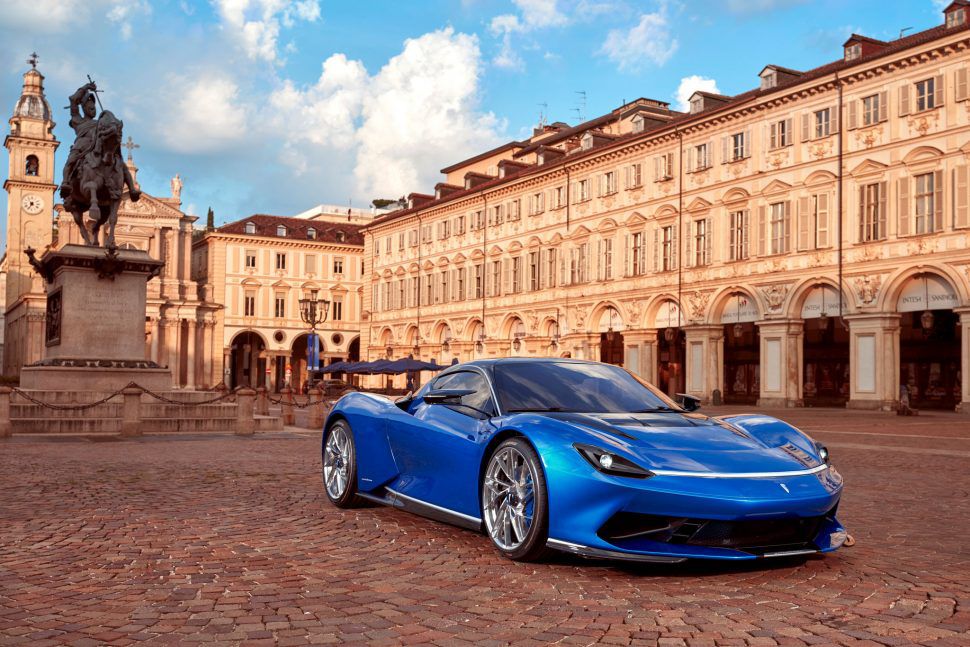 In the late Teens, Pininfarina finally realized a lifelong dream of building a car of its own. And though the vehicle they unveiled at the Geneva was named for the company’s founder, it was likely beyond his imagination: a $2.5-million, 1,900-hp, all-wheel-drive, limited-edition, battery-powered supercar that would accelerate from 0-60 in under 2 seconds, on the way to a top speed of 217 mph. The Battista definitely has Pininfarina exotic car DNA in its design, especially from the front, where it looks like a modern Ferrari. But it also presages a new, all-electric design language the cutting-edge brand will use in an expanding range of luxurious, electric vehicles. Shocking, indeed.
Source www.hemmings.com/blog/2020/03/16/the-9-greatest-pininfarina-designs-that-werent-ferraris/ Related Items from Catalogue Show Related Tags Rolls-Royce Camargue, Pininfarina Battista, Pininfarina, Maserati Quattroporte, Lancia Florida II, Honda Beat, designers, coachbuilding, Cisitalia 202, Chevrolet Corvette, Cadillac Allante, Battista "Pinin" Farina, Alfa Romeo 6C, Hemmings Daily, featured posts, show cars and prototypes, dream cars, coachbuilt cars, hemmings