In pondering whether Brooks Stevens really wanted to see the world move to rear-engine automobile designs last week, we presented conflicting theories about his work: that he genuinely looked down upon such excessively futuristic designs to the point of parodying them, and that he indulged in wildly unrealistic designs from time to time because, after all, he was drawing cars for a living.

After another jaunt through the Milwaukee Art Museum’s Brooks Stevens collection (I could live there, just saying), we’ve found more evidence to the latter theory.

The Metro Turbo above – dated April 1957 – might be the only support needed. It’s got fins and pods and mantaray/batwing fenders and it looks like it’d impale anything it came across. If he (or whichever of his employees’ signatures that is) didn’t sketch this as another parody, we’d be surprised. 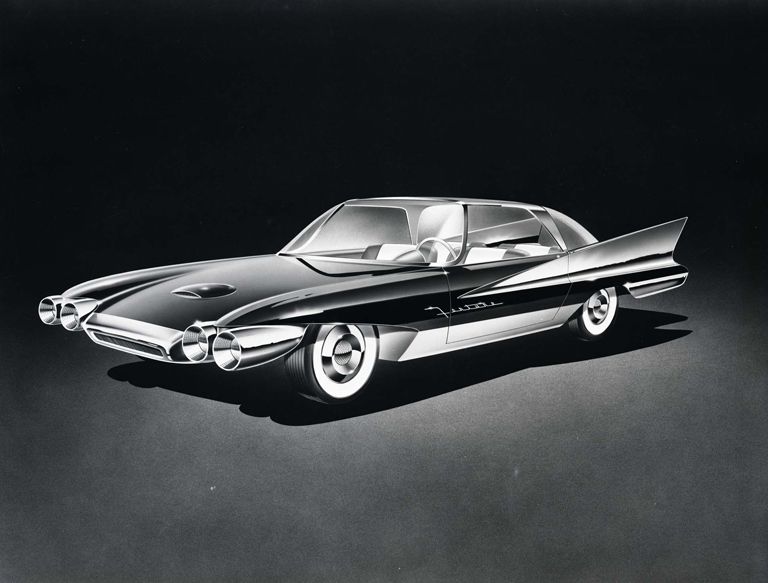 A little – not much – more sedate is this sketch for a car he called the Fortune, dated February 1957. It has his Scimitar A-pillar along with some BAT-proportion fins, enough glass to please Owens Corning, dart shaped throughout, and those massive headlamp pods that look like they’d shake loose after one pothole.

And then when we reach back to October 1949, we see this Custom sedan, remarkable in this context only because Stevens roundly denounced and parodied bubbletops earlier in the decade, then in a moment of exuberance decided to fry all six theoretical passengers evenly.

Whether he showed anybody these designs, we don’t know. Adamson doesn’t mention them, and we’ve never seen them in any other context. And don’t think we’re criticizing the designs at all; a little bit of nonsense every now and then could do us all some good.