More than 60 years ago, a young Virgil Exner Jr. not only followed in his father’s footsteps by designing his own sports car, he also went ahead and built it himself with little more incentive than to see his design become reality. Decades later, he’d like to see one more of his sports car designs make its way off the paper, but this time with a little help from somebody already building one of his father’s designs.

“Everything I do has some kind of connection with the past,” Exner said. “I see this as a modern antique – it’s a hot rod, in effect.”

Exner grew up at the elbow of his famed father, watching the GM, Studebaker, and Chrysler designer draw up a new fender line or shape a hunk of modeling clay into an exciting new car form. He entered the Fisher Body Craftsman’s Guild in 1946 at age 12 and won the junior division with a four-door sedan design that, in some ways, previewed the Studebakers his father designed over the next few years.

While studying for his bachelor’s degree at Notre Dame several years later, Exner designed another car, this one based on a 1950 Fiat chassis that, according to Peter Grist’s “Virgil Exner: Visioneer,” the younger Exner bought from Paul Farago and was determined to turn into a sports car. The design and scale model formed the basis of Exner’s undergraduate design thesis while the construction of the actual car – done in part in Farago’s Dual-Ghia factory in Detroit – helped Exner earn his master’s degree. That car (pictured above), a finned bubbletop dubbed a Simca Special for its drivetrain, went on display at the Paris Auto Show in 1959 and earned Exner both a Fiat roadster (a gesture of thanks from Simca for letting the company display it in Paris) and a design consultancy for Ghia.

Rendering by Virgil Exner Jr. of his newest design.

He later worked alongside his father at Virgil M Exner Inc. then spent more than 20 years at Ford before retiring in the late 1980s. Though he designed a number of noteworthy cars during that career (he takes credit for the Ford Pinto, for instance) and in his retirement co-founded the League of Retired Automotive Designers, he never got to design and build another car just for himself like the Simca Special.

“I’ve always wanted to build another sports car myself,” he said. “I’m down to a simple little Mitsubishi Mirage now, and I’ve never been happy not to have a special car of some sort.”

So for the last couple of years, he’s started to noodle on a new design, one that he described broadly as an antique version of an Indy 500 car. Racing, he noted, always inspired him and his father – one need look no further than Exner-designed Mercer Cobra to see racing lineage – and the two took in many an Indianapolis 500 during the Fifties and Sixties.

“You need to make cars look like they move,” Exner said. “Race cars are simple; that’s a hallmark of good design. Cars today all look the same, with too many superficial and meaningless lines.”

According to Exner, the design – one version of which is seen at the top of this story – is intentionally simple, making it as lightweight as possible and as easy and inexpensive as possible to produce. He imagines a modular space frame and, at most, a Ford 5.0L V-8 powering it. “It doesn’t have to be the hottest car in the world,” he said. “Just different from anything else on the road.”

And, of course, it needs a big fin.

He sees no problem designing the car himself – he’s down to a few different versions, including a mid-engine version and one with more compound curves, which he still needs to choose from – but building the car is an entirely different task. “I’m getting to be an antique myself,” he said.

That’s why he’s turned to Wray Schelin, the Massachusetts-based metalshaper and instructor whose students are currently forming the body of a never-built circa-1945 rendering that the elder Exner drew during his time with Studebaker. Schelin and the younger Exner met through one of Schelin’s students, Gary Ash, and Exner proposed using his sports car design for Schelin’s next student project. 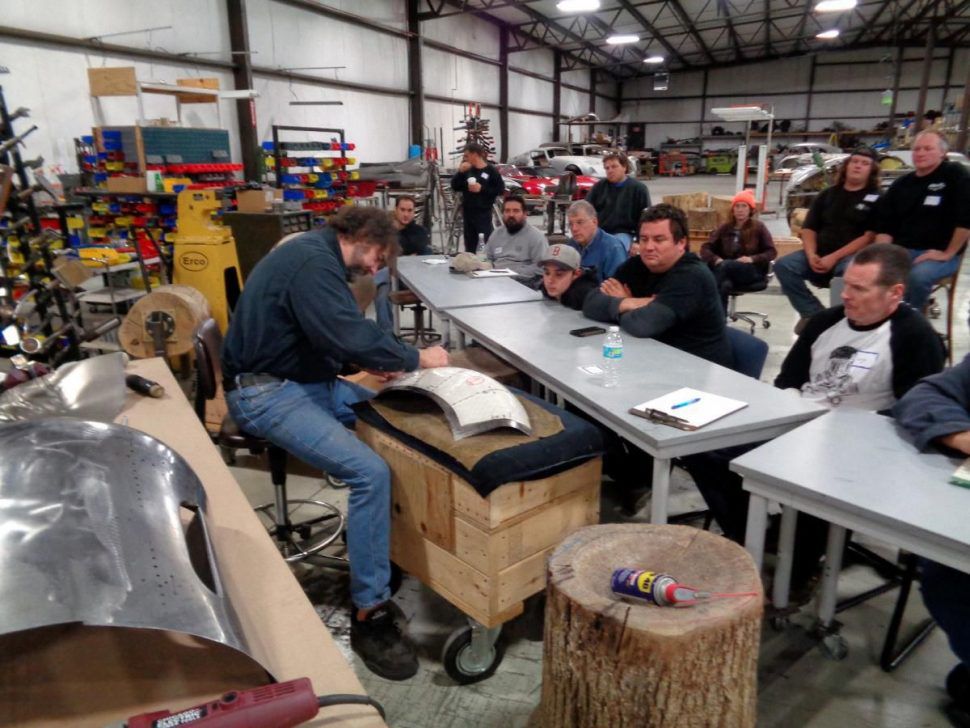 “I figure it’d take two students to work on it for 2,000 to 10,000 hours, depending on how elaborate the design ends up being, while we have other students serving as project managers,” Schelin said. “The deal is that Virgil buys all the materials and pays half of the students’ tuition for the program.”

Schelin said he’s yet to line up the students who’d be working on the project and said he wants to vet any students who are interested in the project – “They gotta be committed and feel the passion,” he said – before getting them started on it.

For his part, Exner, who helped found Notre Dame’s industrial design course, said he thinks it’s a great idea to bring students in to learn metalshaping while working on a project like this.

“We’re losing that kind of talent across the industry,” he said. “I just gotta see how this turns out now.”

Exner and Schelin anticipate starting on the project in the coming months.