After all the talk of streamlined rear-engine cars in America during the Thirties – all the renderings and sketches and homebuilt prototypes and Stout Scarabs – American carmakers finally had a chance with World War II to break with the front-engine tradition and introduce sleek, space-maximizing pushers.

Or, so went the thinking of Preston Tucker and many car designers at the time, and Brooks Stevens may have counted himself among that cadre. Or he may not have. 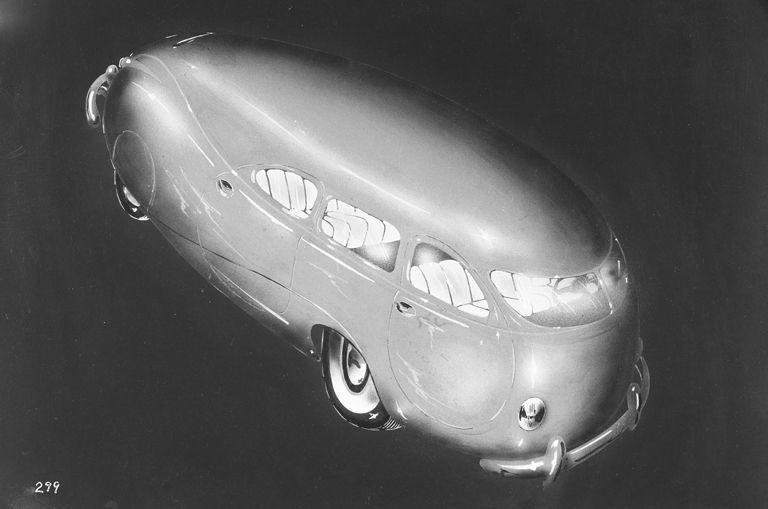 Digging through the Milwaukee Museum of Art’s Brooks Stevens collections last week reintroduced us to a few of Stevens’s renderings that could point to his thoughts on the topic of rear-engined cars. For instance, the museum doesn’t have a date on the above rendering, clearly of a rear-engine vehicle, though it’s of a style consistent with Norman Bel Geddes/Buckminster Fuller-style pre-war streamliners.

However, as Glenn Adamson notes in “Industrial Strength Design: How Brooks Stevens Shaped Your World,” Stevens generally denounced such “grandly impractical schemes” before and throughout the war.

For the most part Stevens chose to distance himself from this giddy optimism about the marvels of the postwar world. Whether this was because of his relationships to cautious captains of Midwestern industry, the fact that he was still relatively unproven, or an inborn conservatism is difficult to say. In any case he distinguished himself through writings and “prophetic” designs that bespoke a distinctively pragmatic stance. He made it his business to debunk his fellow designers’ more outlandish predictions – cars with transparent roofs, all-plastic kitchens, and the like – as both improbable and foolhardy.

Stevens’s most colorful exchange on this point came toward the war’s end, when he and the renowned auto designer William B. Stout delivered opposing papers to the Society of Automotive Engineers on the possibility of a postwar flying car… Stevens, taking his customary cynical position, both dismissed Stout’s ideas and took the opportunity to express misgivings about the practicality of aluminum and plastic car bodies and rear-engine automobiles. 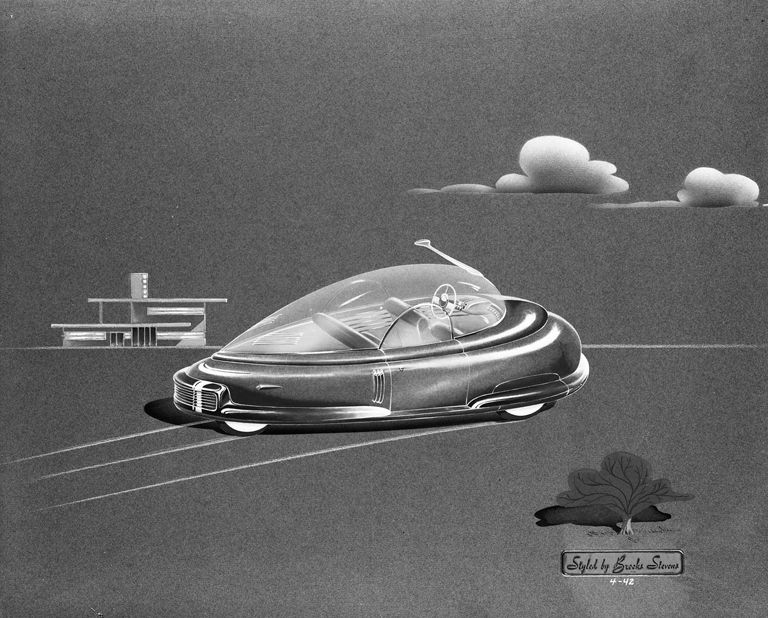 And yet in late 1942 he penned an article for Popular Mechanics titled “Your victory car,” in which Stevens speculated wildly on what shapes the postwar car might take. While he wrote from a practical standpoint in suggesting that the Willys MB/Ford GPW jeep would be adapted for civilian use (earning him a design consultancy with Willys-Overland and leading to his various designs for Willys after the war) and cautioned that “it is only wise to discount” the ideas of wild transparent-top rear-engine vehicles, anticipating that postwar cars would simply be lightly retooled versions of the manufacturers’ 1942 models (his May 1942 bubbletop runabout above was included more as a joke than as a serious design sketch), he also later on in the article gave serious consideration to rear-engine vehicles further on down the road. 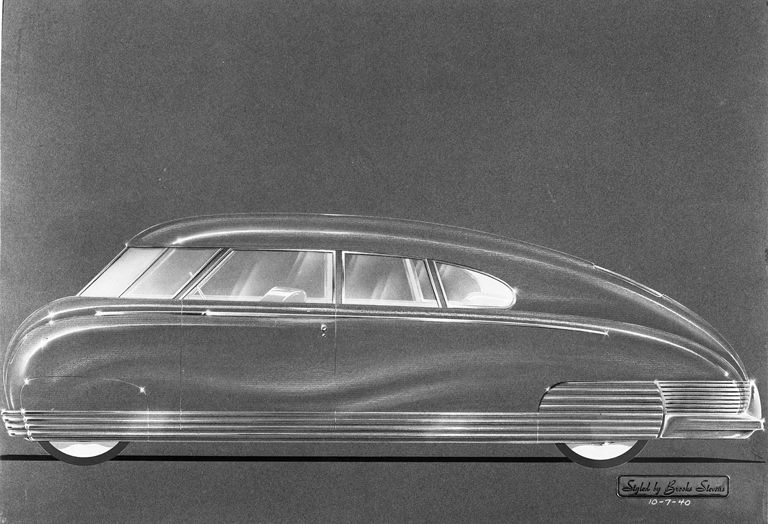 As the world gradually emerges from war conversion to peacetime manufacture, we may find the rear-engine type as an ultimate and desirable possibility. Passengers will be moved forward for further increased vision, more interior lounging space, more complete body streamlining. The placing of engine noise, heat, and fumes behind the passengers instead of in front of them is a long-desired change. The rear engine design offers traction over the rear driving wheels, yet there is speculation as to whether it might reduce the weight over the front wheels to a point where satisfactory steering characteristics might be reduced. Moving the passengers forward enables the rear-engine car to approach more nearly the teardrop shape; however, the degree to which passengers can be moved forward is limited by the space required to turn the front wheels when steering. The rear-engine car with its relocated power plant will eliminate the need for drive-shaft tunnels and the car can then be lowered to a somewhat greater extent than existing models, yet this, too, is governed by ease of entry and exit and by existing curb heights.

And to illustrate his points, he inserted a few of his renderings of rear-engine vehicles like the one at the top of this story, dated November 1941, the one above, dated October 1940, or the one below, dated July 1942, all showing a vehicle similar to his housecars/mobile sales rooms but lower and closer to the proportions of an average passenger car. 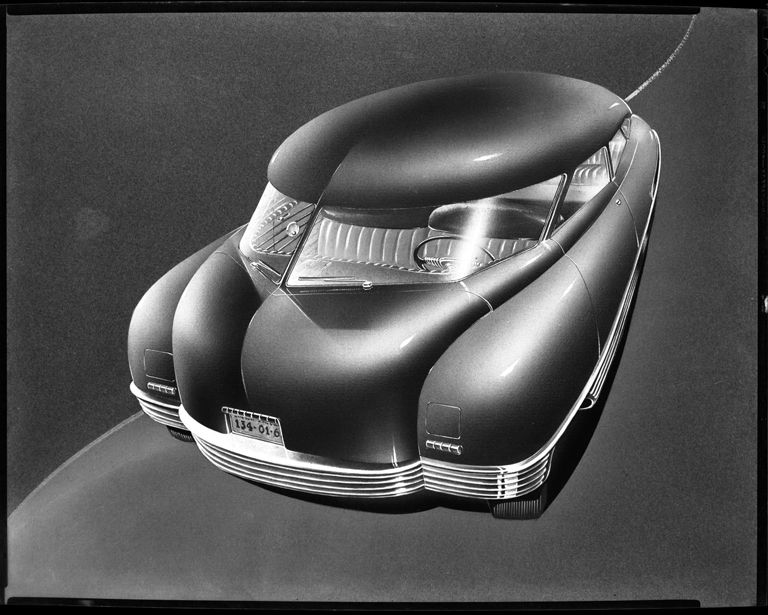 Adamson noted that Stevens did admit to a form of opportunism in dealing with clients, in which he was happy to “borrow on realism, fantasy, or whatever,” an opportunism that Adamson claims explains those rear-engine renderings in the article. “In short, he showed his capacity to design for the present at various levels of practicality, while borrowing from the sensationalism of outlandish futurism where appropriate,” Adamson wrote.

Indeed, the rest of Stevens’s automotive work at the time envisioned highly rounded automobiles with conventional drivetrains and while he might have been prone to flights of fancy, he generally tried to keep them grounded and did his best to avoid jet-age excesses.

And yet we see that he did return to his rear-engine sedan ideas multiple times and that, excepting perhaps the July 1942 rendering (which appears to riff on an earlier November 1941 rendering, below), none of the rear-engine designs were necessarily created for the article, which suggests he believed in the idea, just as he believed in the ideas he continually recycled in his other automotive renderings. 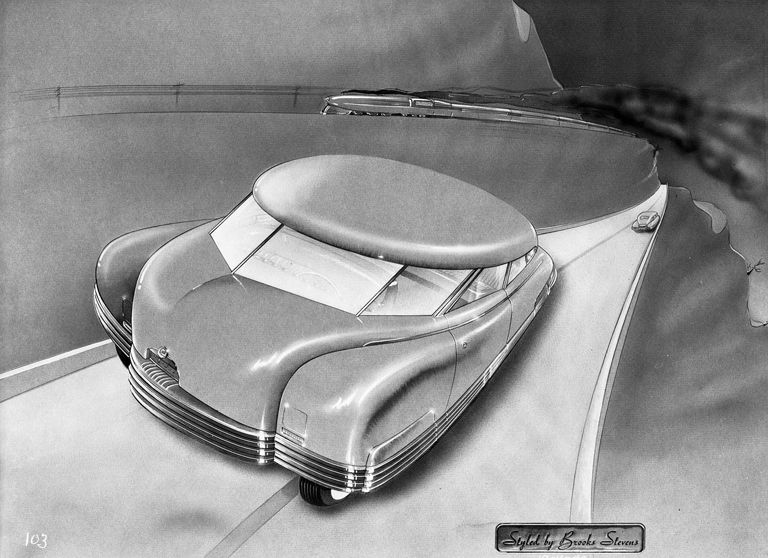 So was Stevens secretly one of those starry-eyed dreamers who believed in a rear-engine future? Or did he simply believe that, like so many other technologies, these cars of the future would perennially remain in the future and that these ideas should belong in the same category as the other parody renderings he sketched throughout the years?