With attendance on the decline and a stable of noteworthy but ancient vehicles in a royal/imperial palatial setting, France’s Musée National de la Voiture needed more than just a shot in the arm, it needed a broad rethinking of its collections and aims. That revival, as the museum’s own materials calls it, starts with the recently opened exhibit focused on concept cars, “Concept Car. Pure Beauty,” reportedly the first such retrospective in the country.

Arguably, the automobile collection at the museum – which, founded in 1927, lays claim to the title of world’s oldest museum dedicated to transportation – already contained a number of concept vehicles, even if one wouldn’t typically regard them as such. Amédée Bollée’s 1878 Mancelle steamer, for instance, might have been the world’s first production automobile, but it also pioneered four-wheel independent suspension.

But a series of horseless carriages, regardless of their places in automotive history, don’t excite modern museum-goers the way show cars, dream cars, prototypes, and other one-offs from throughout the twentieth century do. So Rodolphe Rapetti, the museum’s director, and Richard Keller, the curator at Musée national de l’automobile’s Collection Schlumpf in Mulhouse, set about curating the concept car exhibit to help usher the museum into the twentieth century.

“This exhibition is the sign announcing the renewal of the museum, we believe in the castle of Compiegne,” Rapetti told Le Parisien. “It is now called to open to the automobile heritage of the twentieth century.”

The setting itself – the Compiègne Palace 80 kilometers outside of Paris, originally built under the reign of Louis XV and later updated under Napoleon I and III – still houses period tapestries, furniture, and artwork, something Rapetti and the museum’s copywriters took into account with the new exhibit.

“This dialogue between 18th century architecture and 20th century design is intended to highlight the automobile form as a creation that bears witness to human intelligence and sensitivity as well as a work of art,” the museum’s website notes. 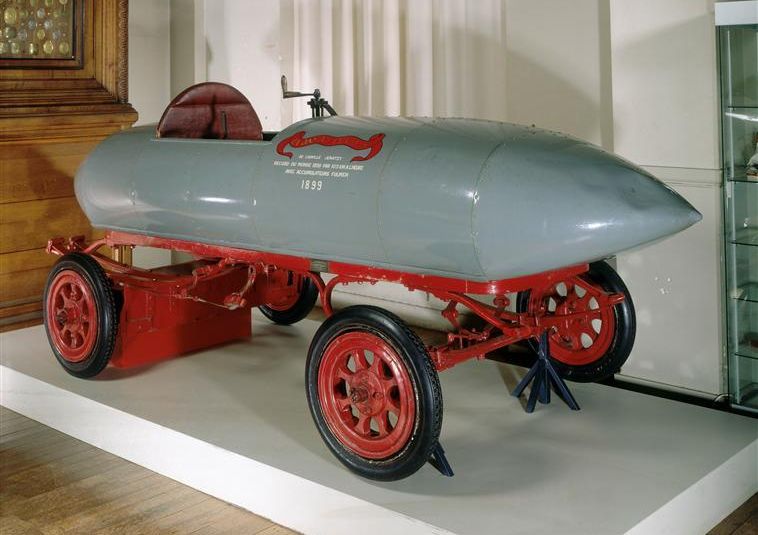 The exhibit also includes a number of motorcycles, among them the streamlined 1948 Moto Major, situated outside the palace’s chapel.

As Rapetti told Le Parisien, he considers the juxtaposition of ornate antique surroundings and modern vehicles intended to showcase cutting edge and futuristic designs “a sublime wedding.” “It is a question of presenting the automobile in what is closest to the object of art,” he said. “I brought to this exhibition the same requirements that I would have had for an exhibition of paintings.”

Accompanying the exhibit will be workshops for children and teens to design and 3D print their own concept cars; a guided tour by Rapetti; and a talk by Philipp Moch, who manufactured and raced the MOC sidecar.

The exhibit, which opened November 29, will run through March 23. For more information, visit ChateaudeCompiegne.fr.