Once upon a time, when you sold a car, that was the end of it. You said goodbye, it was traded in, you exchanged cash for a title from a newspaper ad, and you never saw it again. Or so I thought. Isn’t that how it’s supposed to work? Because it doesn’t seem to with me. I haven’t sold that many cars in my life, yet over time, consistently, those few cars have come back to haunt me to varying degrees.

The first was my dad’s ’73 VW Beetle. A car he bought new, a car I grew up in the back of, a car that lasted 150,000 miles and remained tight as a drum, a car that brought on a long-lasting Beetle fetish. It was a car that was promised to me all through my teen years, and then for reasons that would shift with the second hand on the clock, it was sold out from under me in 1985. My anger didn’t subside for years. He sold it through the local paper, in those pre-Craigslist days, to an older lady who rolled up in a mid-70s Camaro with a vinyl top. Initially, she wanted something smaller and more economical, and she picked it up one day while I wasn’t home. Couldn’t bear to see it go. Two days later, the lady was ringing the doorbell: she wanted to reverse the deal, wanted to give the car back, wanted her money back. But the idea that this car shouldn’t ever have gone away, much less to someone who had a case of buyers’ remorse, has long stuck in my craw. Dad told her to go pound sand. 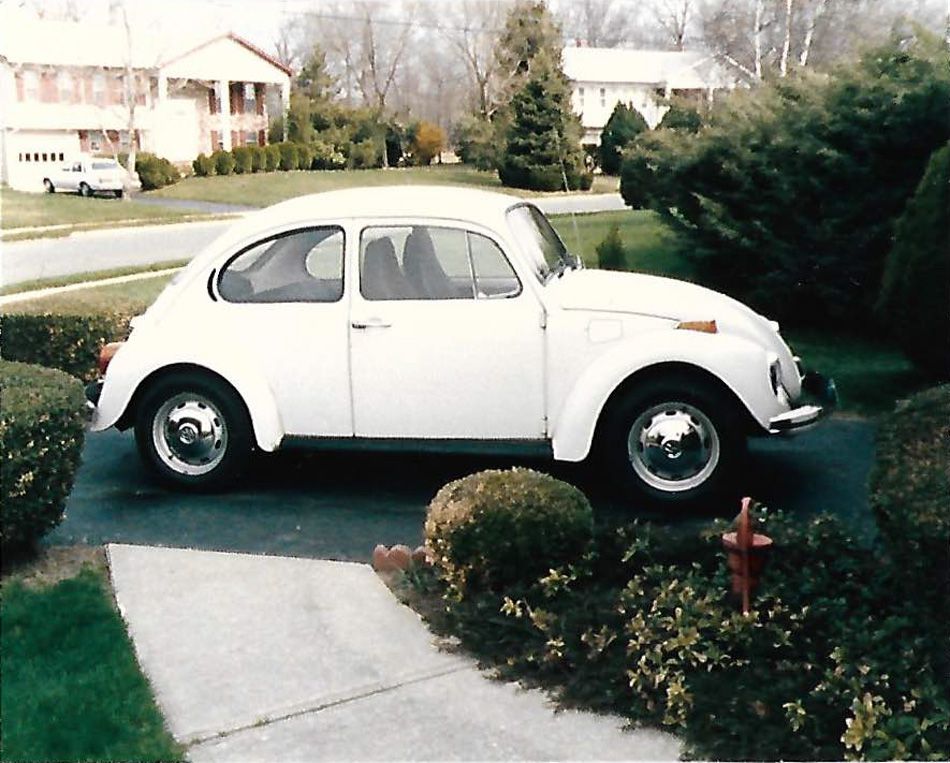 The Beetle was supposed to go to me, not some lady who tried to sell it back almost immediately.

In lieu of the Beetle, I ended up with Grandpa Andy’s old ’76 Chevy Impala Custom Coupe, a garage-kept, 29,000-mile beast with a 4500-plus pound curb weight and a pavement-rippling 145 horsepower on tap. I had it for five years (1987-92), through the end of high school and most of college, and added almost 60,000 miles; I only sold it to pay for the insurance on the new car that followed. A local kid bought it as his first ride, and I couldn’t bear to see it go either. But that summer, when I was home, I was visiting a shopping plaza I’d always driven past but never had reason to go to before. The reason for my presence there is now lost, but good grief it’s New Jersey, home of the strip mall. Quite by chance one sunny Saturday, I saw the Impala’s new owner roll through the parking lot, its factory hubcaps in place of the Chevy pickup piepans I installed in high school after the baby-moons I bought at Pep Boys rusted out in a matter of months. Of all the strip malls up and down the Route 9 corridor in Monmouth County, of all the hundreds of thousands of people and cars that resided in the area, I see my old college ride waft by. I wanted to flag him down and ask how it’s been treating him, but seeing it shot a chill through me. I’ve long wondered where it went after that. My best guess was that it was eaten by Robosaurus at an event at Raceway Park in Englishtown sometime in the late ‘90s, by which time it would have been weeping rust from every orifice after a few more robustly-salted winters. It surely deserved better. 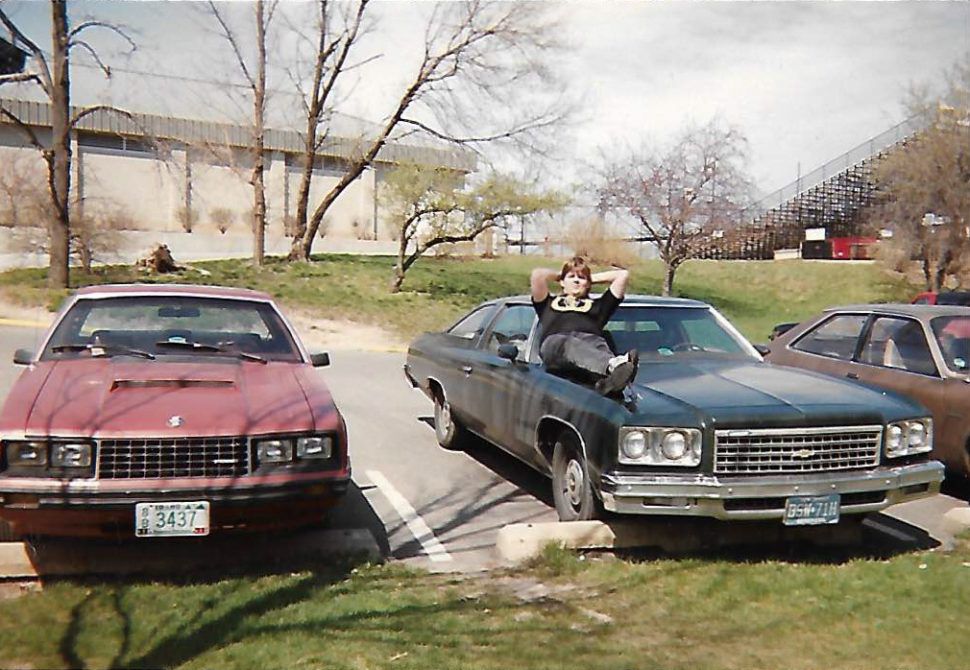 Who needs a chair when you have Grandpa’s 1976 Impala?

After the Impala came my first new car, a 1992 Nissan NX2000. It was my boon companion for the better part of a decade: got it in March and ran through the 3/36 warranty by Christmas, thanks to a minimum-wage magazine gig that saw me driving 165 miles a day round-trip. It was my transport to the West Coast when I moved to California in ’96, and my wife’s transport when we moved from LA to South Bend, Indiana, at the end of 2001. I went everywhere in it, generally at super-legal speeds, when I was in my 20s. In ’03, when the Mrs. and I came to our senses and ran back to California as if our very sanity depended on it, the NX2000 stayed behind. The reality was that it was a $500 car, and it would have cost me $1000 (which I didn’t have) to tow it back to LA. The odometer was well north of 200,000 miles, rust was bursting forth on the tailgate (around the third brake light), a third transaxle was suffering from fifth-gear popout, and both fenders were wrinkled from careless towing following a theft recovery. I loved it but I had not treated it well. I sold it through a Nissan-specific forum to someone who agreed to meet me halfway (he was in West Virginia, I think … we met somewhere in Ohio.) I held it together on the way there, but I couldn’t drive home. I couldn’t stop crying. Three hundred miles of tears and snot gunking up my goatee. I got home, and in these pre-cellphone days (for me anyway) I find a message on my answering machine. Turns out the new owner, in his youthful exhuberence, revved his new 200,000 mile car clear to redline at the first opportunity and blew the engine – and accused me of somehow running it out of oil. He left it on the side of the Ohio Turnpike, he was running home to get a trailer, and he wanted some money back. The next morning, I got a call from a most unamused Ohio state trooper who wanted to know when I was going to get my car off his road. I said, joke’s on you, I just sold that car, and it’s not my responsibility anymore. I briefly stayed in touch with the buyer, who rescued it roadside before Ohio’s finest sic’ed a tow truck on its sad carcass. He took exception when I once referred to it as “my” car in our correspondence, and that was the end of that. 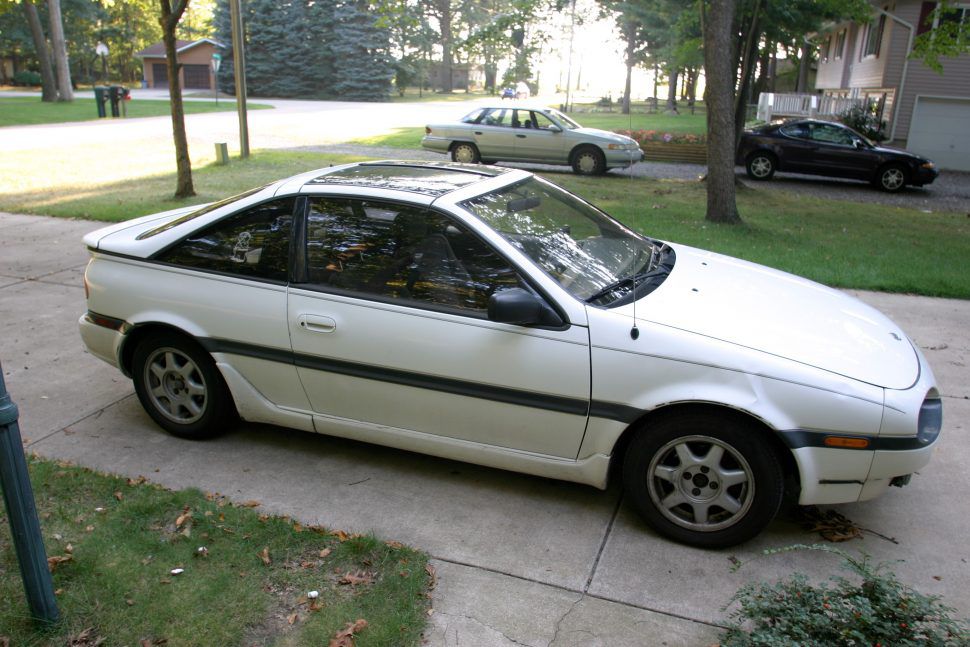 I pretty much ran it into ground, but the Nissan NX2000 was hard to let go.

I sold my ’70 Mercury Montego (pictured at the top of the story), my prize from four and a half slightly weird years toiling under my disdainful masters at Hot Rod magazine, to some guy in Texas. I got the insurance money from it, he paid handsomely for the remaining carcass, and that was that. Except someone saw it for sale in a Ford online forum a few years back, now running and driving with a big-block under the hood, and at a price that made me think seriously about calling my bank. I passed. it wouldn’t be the same. You can’t go home again. Last I heard it’s stomping around the Northeast somewhere, maybe Boston? 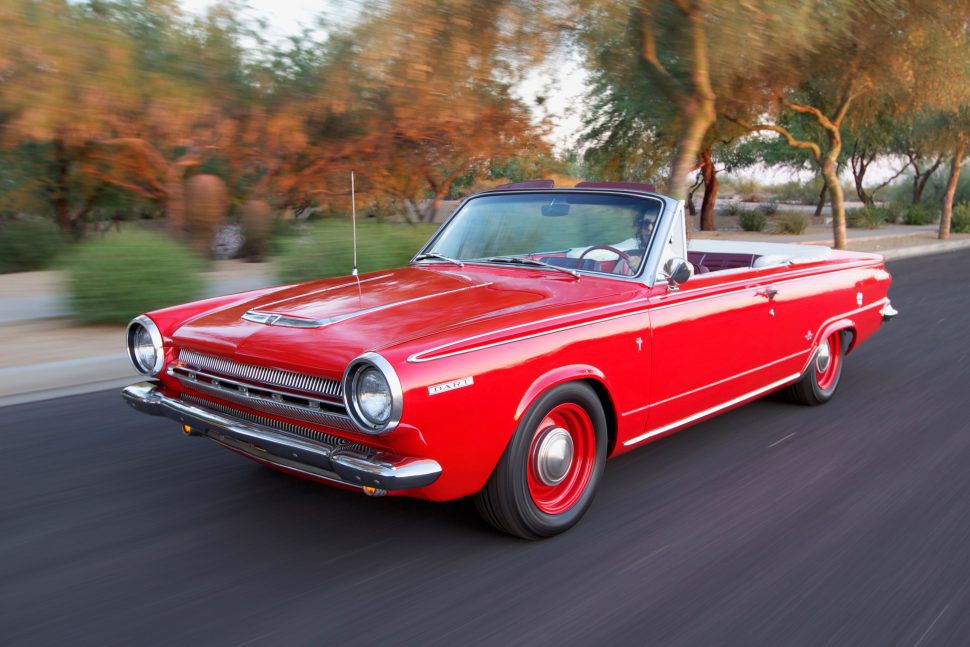 The Dart, one of my easier automotive goodbyes.

And then there’s my Dart. The only car on this list that I confess that I didn’t cry/fuss/wring my hands over selling when the time came. I sold it at a car show during Scottsdale auction weekend, to a couple of Brits who were going to ship it across the Atlantic and give it a go. A year ago, the buyer found me online and asked about finding suspension parts. He had installed some wide whitewall tires, and some engine dress-up stuff I never bothered with, and had a great time. He took it on a trip to continental Europe alongside an Alfa Romeo Montreal. Heady company! It was even getting lined up for a photo shoot in Classic American, Britain’s only monthly magazine all about American cars and American car culture. But a month or two back, the owner sent me a devastating photo: nearly everything forward of the Dart’s firewall was smashed. Fenders folded. Hood buckled. Front subframe well out of true. The story was that someone (not him) took it for a drive, and was hit by a Mercedes on some narrow British B-road. I asked him if I could run the photo he sent me here on my blog, gave him some leads for finding repair parts (hello Desert Valley Auto Parts). Judging by his lack of response, I’d say that my all-American Dart is now a pile of rusting parts, now quietly disintegrating in a stone barn behind someone’s farm house. Or else it’s been parted out, and the remains of its carcass have been scattered to the winds. I mean, I was indifferent to the Dart leaving my life, but I didn’t wish ill upon it. 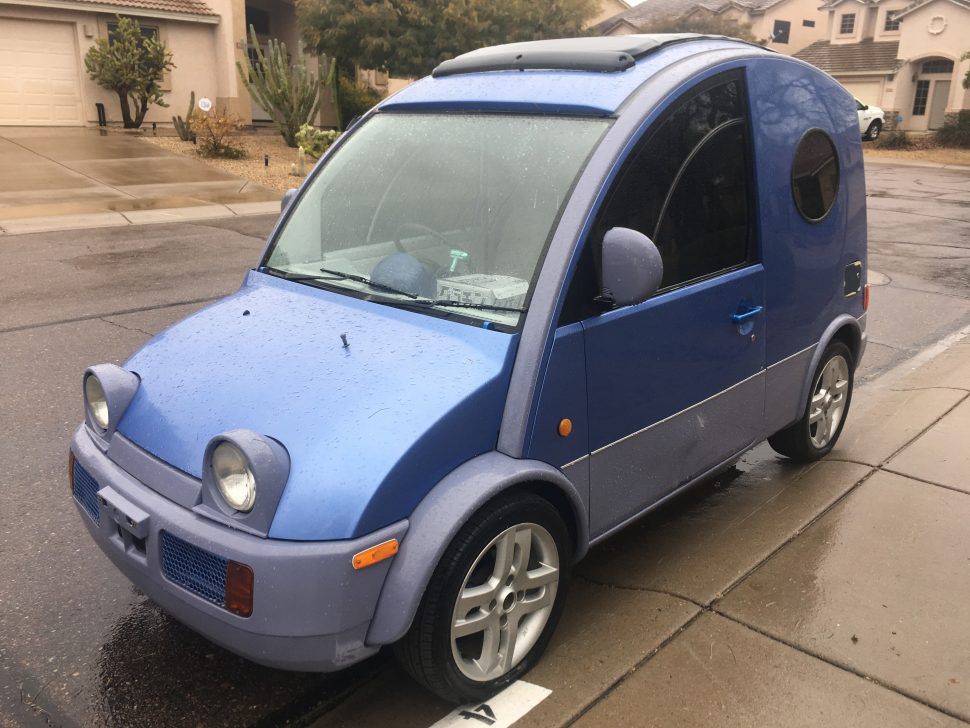 It’s time for the snail car to slither to another owner.

And now, the time is coming for me to move my Nissan S-Cargo, my funky little RHD snail, my introduction to JDM life. It runs fine. I have no regrets getting it. I bought it for a purpose, and that now that events have conspired to shift my life around into new shapes, that purpose no longer exists for me. But if you should decide that you need to buy it please, do me a favor: Don’t tell me what happens to it.