All photos courtesy of Ford.

For the first time since the model’s 1964 inception, Ford has put the Mustang name on a vehicle that is not – at least according to previous definitions – a Mustang. The Mustang Mach-E is a crossover electric vehicle with up to 300 miles of EPA-rated range and a zero-to-60 mpg time as fast as the mid-three-second range. Deliveries start in late 2020 for what Ford calls the First Edition models, while other trim levels will follow in late 2020 and early 2021. Interested buyers can put down a $500 deposit at Ford’s reservation website to get in line for their own copy.

The specs of the Mustang Mach-E look pretty strong as a new competitor in the EV market. In addition to the First Edition there are four trim levels: Select, Premium, California, Route 1, and GT. Across the lineup, a combination of rear- or all-wheel drive and a standard- or extended-range battery promise a mix of single-charge distance and acceleration times. On the low end, all-wheel-drive standard-range models are estimated at 210 miles (rear-drive adds 20 miles), and the longest distance on a tank of electrons is 300 miles with rear-drive extended range models (all-wheel-drive exacts a 30-mile penalty). Those models will manage 0-60 mph times in the five- and six-second range. The GT only comes with the big, 98.8 kWh battery, can hit 60 in the mid-three-second range, and will go 235 miles on a charge.

In terms of horsepower, the single electric motor will provide 255 hp in standard range versions and 282 hp in extended range models. All-wheel drive adds a motor but the peak output is unchanged from the standard range. Extended-range AWD models pump out 332 hp. The GT tops the lineup with 459 hp. Torque is 306 and 417 pound-feet (standard and extended range), while GT has 612 lb-ft of twist.

Dimensionally, the Mustang Mach-E is slightly shorter and skinner than a Ford Edge, but the swoopy styling gives up some function to form, despite the battery packs residing in the floor between the wheels. Passenger space is similar to the smaller Escape, which is comfortable for four and seats five. The Mach-E has smaller cargo area than the Escape at 29 cubic feet, although the EV has the bonus of a 4.8 cu ft front trunk. Compared to the Tesla Model 3, the Mach-E is within an inch or two of most interior dimensions, with almost three more inches in rear leg room. 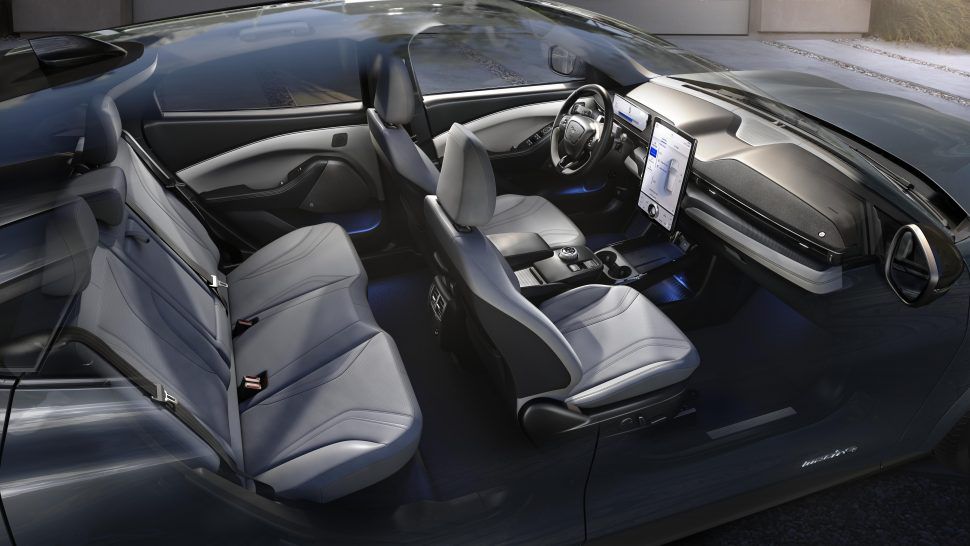 One thing about the Mach-E that is definitely not Mustang-esque are rear seats sized for actual adults.

If you’re thinking Mustang for the price, you might be a little disappointed. The Select model starts at $43,895 before the $7,500 federal tax credit, which works out to about $800 more than the cheapest Mustang GT after the tax break. The Mach-E GT, the most expensive version of the lineup, starts at $60,500 before tax incentives. All models come with adaptive cruise control, speed sign recognition, automatic emergency braking, blind spot warning, and a few other driving aides. The Mach-E also includes access to the FordPass Charging Network, which presently consists of more than 12,500 charging stations, some of which offer DC fast-charging capabilities. 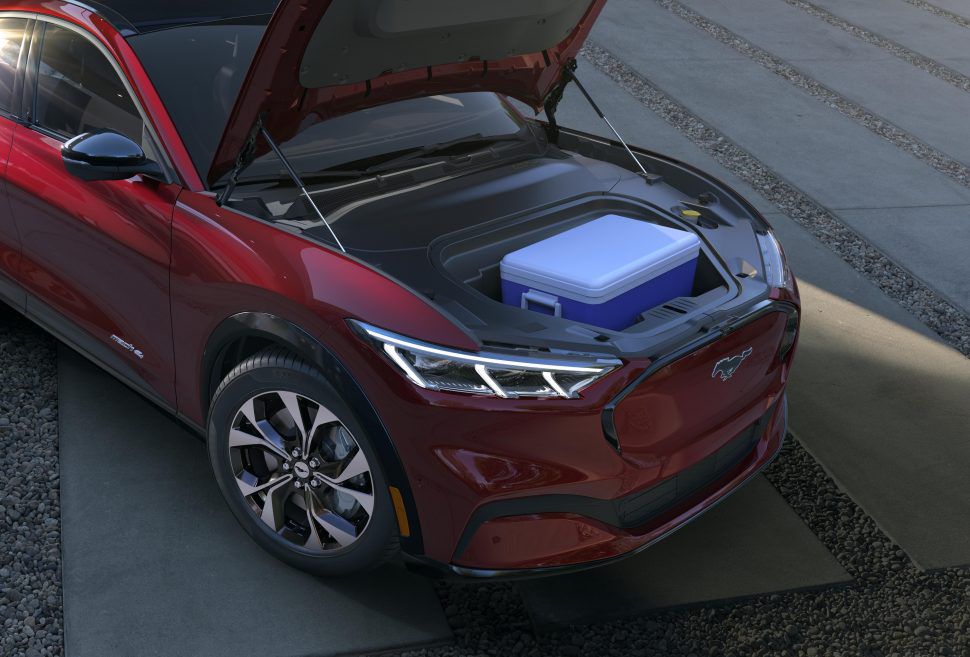 For more details on the pricing and specifications, dive into Ford’s press release. On paper, it looks like Ford hit all the right notes. Which means that the main issue with the Mach-E will not be that it’s an EV or how it lines up in the market, but whether or using the Mustang name was the right move. The Mach-E is a reference to previous iterations of the Mach 1, but those all shared the bodywork with other Mustang coupes.

On the one hand, it’s fairly aggressive move to ape the Mustang’s general style from the rounded hood to the muscular rear wheel arches. By performance figures and appearance alone, the Mustang Mach-E is an appropriate name. The Mach-E hits some of the same emotional notes as when you see the real-deal pony car, even if you know it’s shameless ploy. But is it really so shameless to trade on one of Ford’s strongest brands to get some attention for it’s first mass-market EV? If you want to win the game, after all, you use your strongest players. And the modest sales of non-Tesla EVs suggest that the buying public is not swayed by specifications alone. There will be howling from traditionalists of course, independent of any similar lamentations regarding the manual transmission, internal combustion engine, and proliferation of SUVs. My gut reaction to this is that it’s going to work – the same way that Land Rover added the Sport and Evoque models to the Range Rover lineup without tarnishing the flagship SUV. The Mustang will still be the Mustang, and the Mach-E would get far less attention if it didn’t carry the Mustang name.