Fifties concept cars aren’t the easiest things to restore. The handbuilt one-off glimpses of automotive futures past don’t exactly enjoy huge aftermarket support. But that doesn’t seem to bother Tom Maruska, one of the few people with any real experience restoring concept cars, who’s currently giving an ongoing master class in how to restore the 1956 Mercury XM-Turnpike Cruiser.

“When you look at the overall project, it is huge, but in reality you’re only doing one section at a time so it’s not one big project, it’s a whole bunch of little ones,” he wrote on his website. “Nothing to it!”

Tom, who made contact with the previous owner of the Ghia-built XM-Turnpike Cruiser while in the middle of restoring the 1954 Mercury XM-800 concept car, ended up buying the XMTC, as he abbreviates it, in the summer of 2018 after it had spent decades suffering from vandalism, the elements, ham-fisted and abandoned attempts at restoring it, and plain neglect. Yet, despite the extensive rust that would have doomed any other restoration from the start, he noted at the time that the XMTC remained mostly complete, aside from the broken-out glass and purloined intake and carburetors. 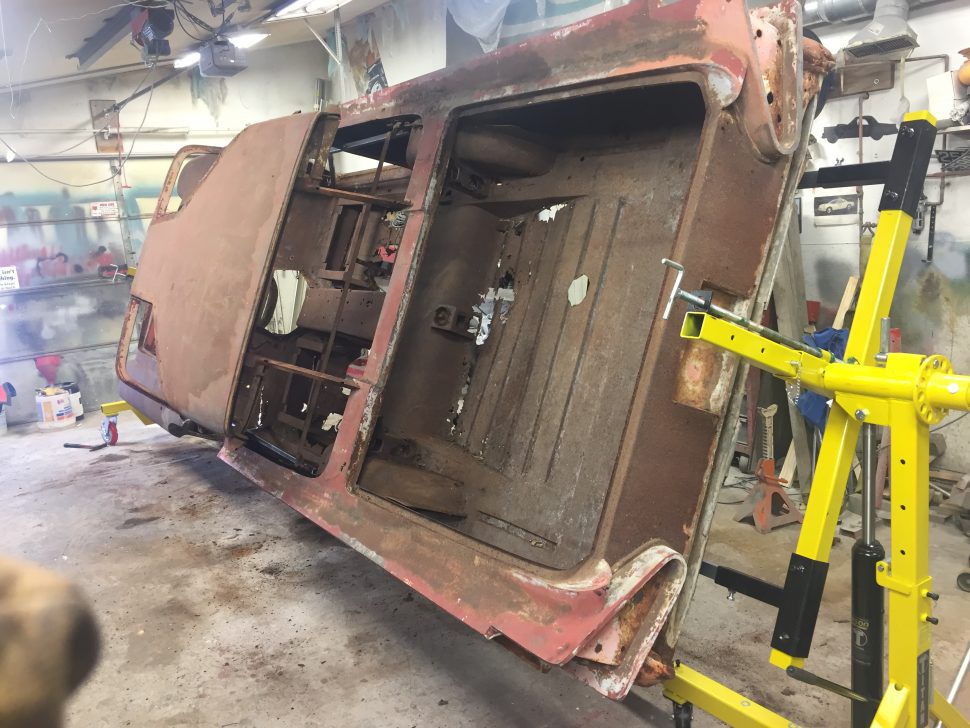 Even before getting the body off its chassis and up onto a rotisserie to survey the substantial rust, Tom first collected all the car’s trim, repaired it, and sent it off for chrome plating. As he explained:

I wanted to get the bulk of the chrome parts to the plater because it takes 4-6 months to get them back. When I get to finishing stages, which won’t be for some time, I want those parts here and chromed for fitting. As you may or may not know, when you get parts re-chromed they often grow a little larger than they were so it’s imperative to have the finished part for fitting for parts that fit tightly against a painted surface. 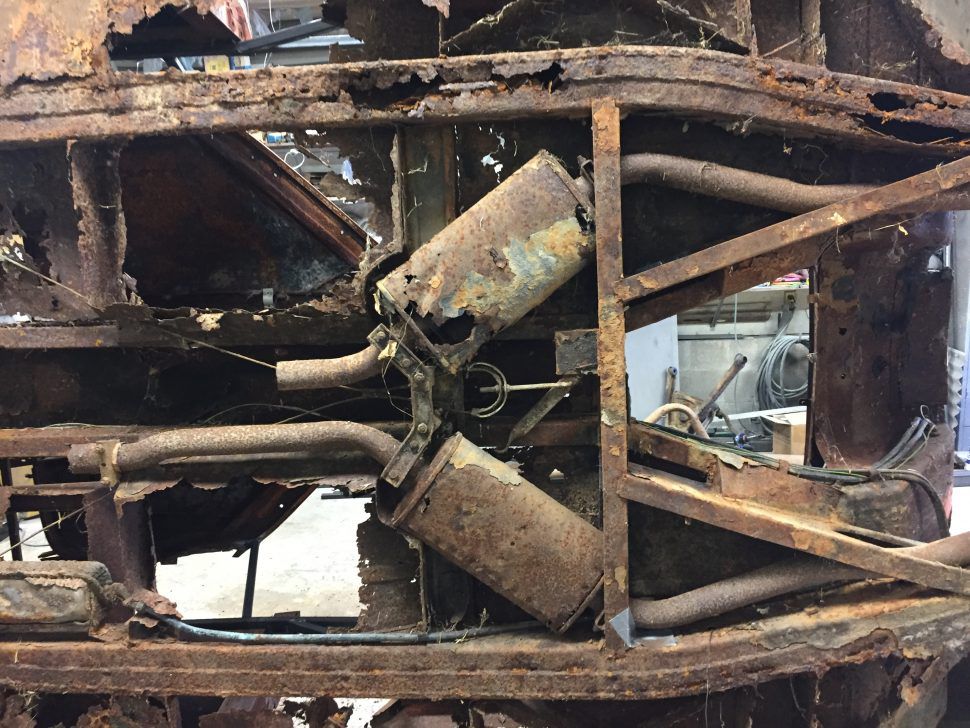 As for that extensive rust, it had attacked not just the body but the lengthened and fortified chassis as well. Fortunately for Tom, another 1954 Mercury chassis – similar to the extended and boxed one that Ford shipped to Ghia to serve as the basis for the XMTC – came with the concept car. After having it sandblasted, he then started snipping out pieces to graft into the XMTC’s chassis, including the front crossmember. 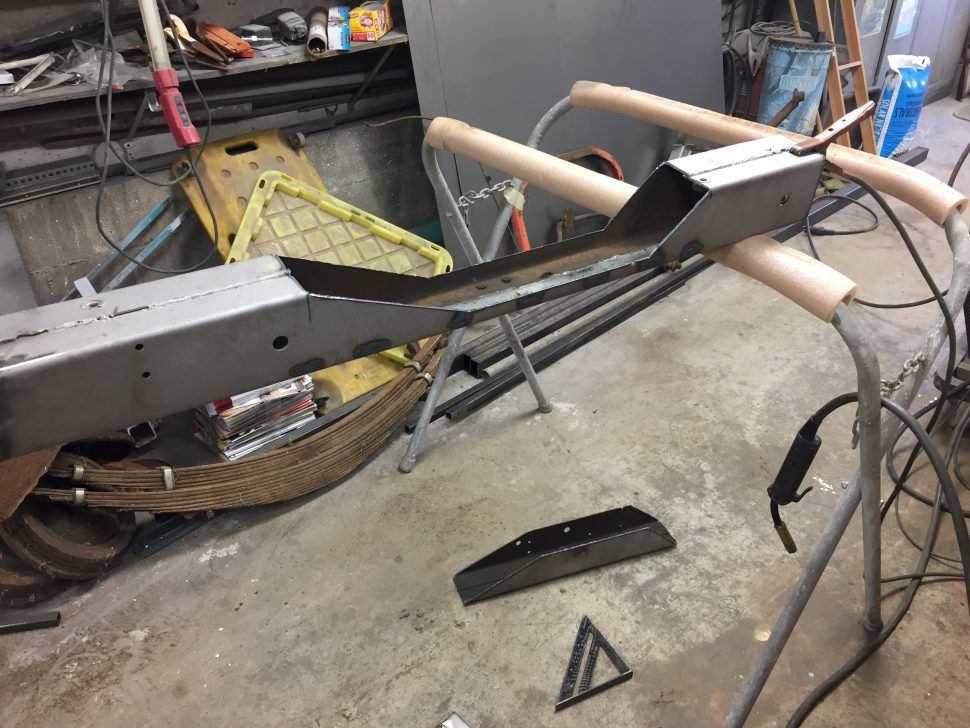 After that, he separated the frame rails to modify them just as Ghia originally did. That included notching out sections of the rails to get the seats, floor, and thus the entire body lower than any contemporary American car.

When I got the donor rails cleaned up and ready to install, I cut what was left of the floors in the cabin from the chassis and then cut the ends so they could be removed from the car. I left the two ends that remained in the car slightly long so I could trim them more accurately once I was able to lay the new rails in place. Then I welded the new rails in place. I also welded boiler plates over the seams in the frame rails. Keep in mind this whole operation took a couple days and a few more bad words. 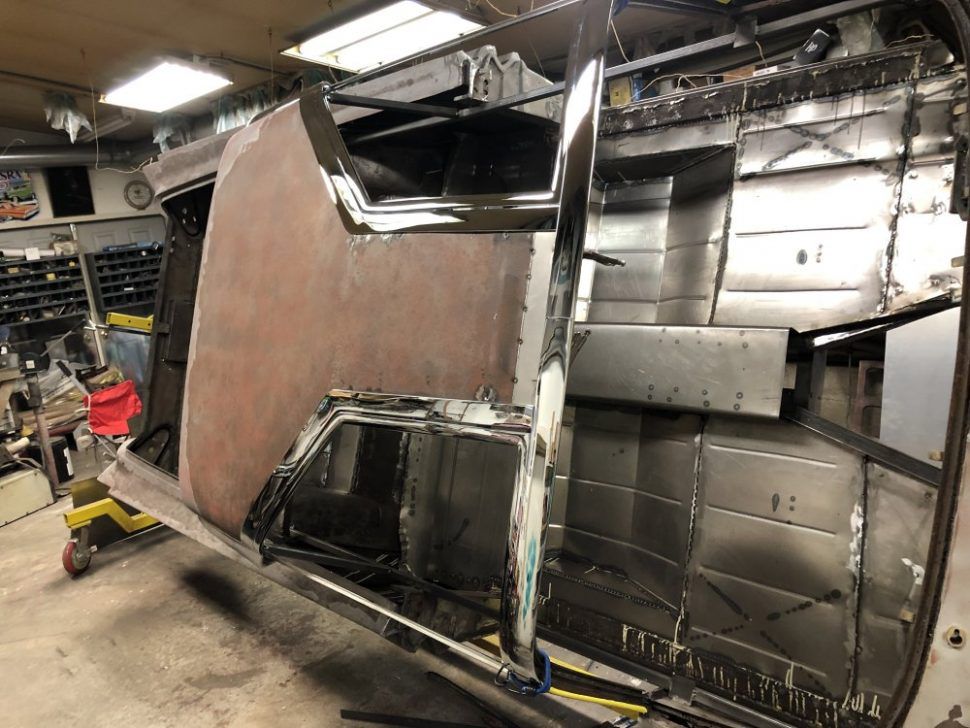 These might be a little out of chronological order, but this next set illustrates Tom’s insistence on getting the trim done first to fit his bodywork to it. The butterfly hatches, which opened with the doors or independently via switches inside, operate off a reinforced section of the roof, and all the reinforcements had rusted out. Repairing the rusted sections here involved more than just cutting out the old and patching in the new – Tom also had to fit and refit the hatch frames dozens of times to not only get them to operate properly but also to get the trim to fit.

I’ll be honest with you, they didn’t the first time, or probably even the 20th time. I had to cut out and slightly move the mounting brackets for the butterflies many times over the next couple weeks. It was pretty damn frustrating. I was ecstatic when I finally got it so the gaps were all equal. In order to remove the brackets each time I had to completely remove the roof rail trim which is a real pain. But I finally got it right.

It wasn’t all metalwork fun and games. In fact, Tom broke up the sheetmetal replacement with other tasks related to the car to keep from getting burned out. For instance, he spent some time figuring out how to not only create master molds for the throttle and brake pedals, which were originally custom cast to match the car’s paint and severely deteriorated, but also how to replicate the casting to the best of his abilities.

Though the engine’s out for a rebuild, he still has the suspension and other chassis parts to clean up. 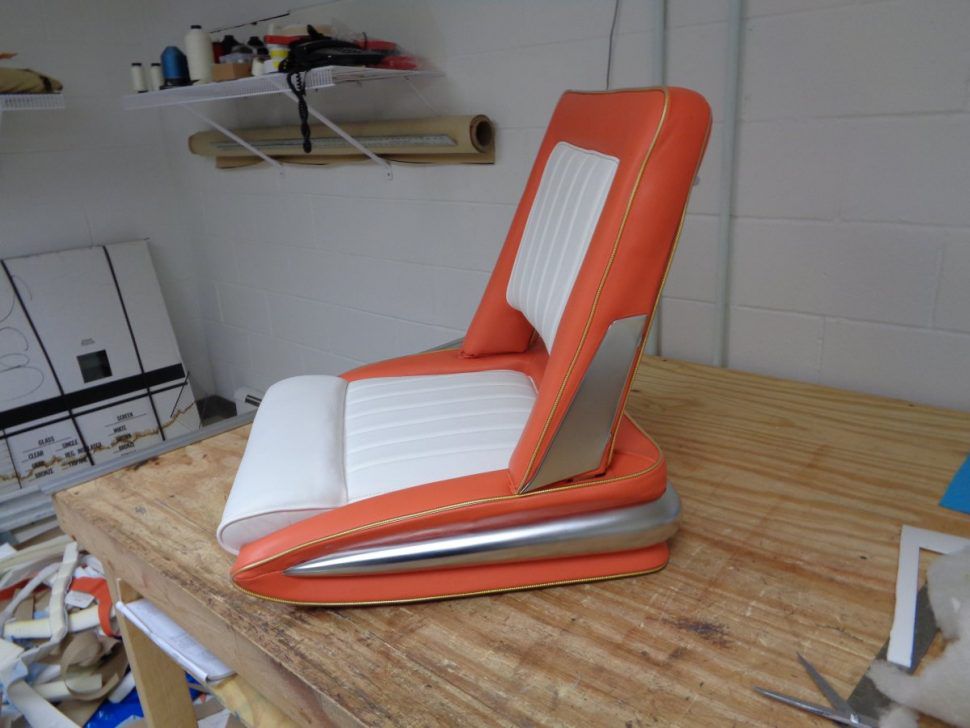 He’s also hand-stitching the new interior based on the existing seat frames and what was left of the original upholstery. 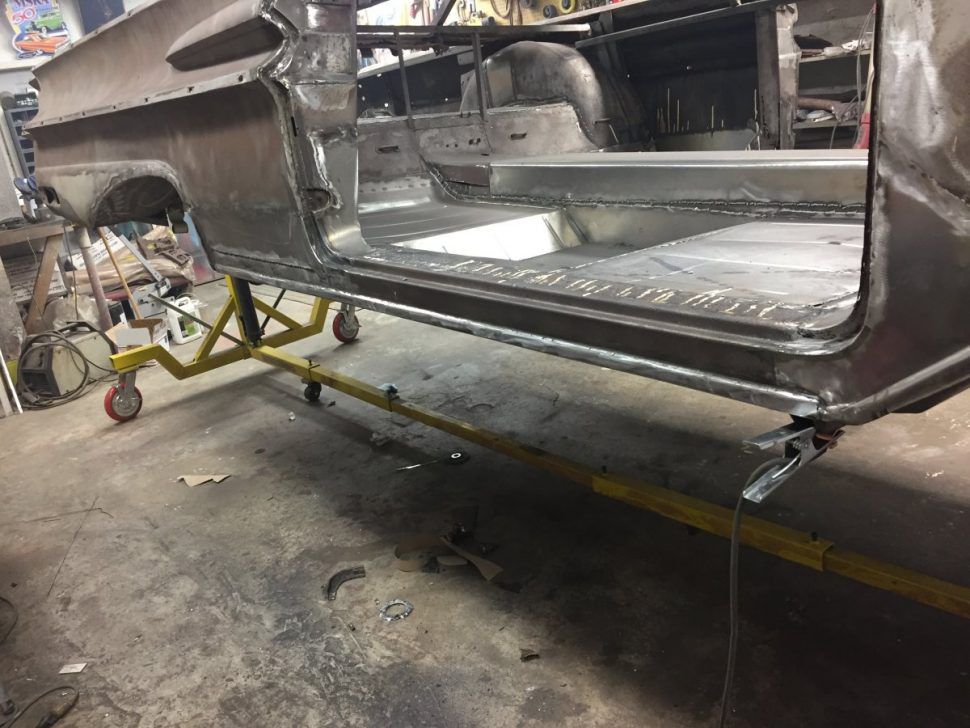 But metalwork beckons, and there’s plenty of it to do, from replacing the floors to repairing even the hinge pockets in the doorjambs. I asked him if he was pulling patch panels from a secret concept car junkyard, and while he didn’t divulge where some mythical place might be, he did say he’s had to use nine four-foot-by-eight-foot sheets of metal so far on this project, and estimates he’ll need another couple before he’s done. 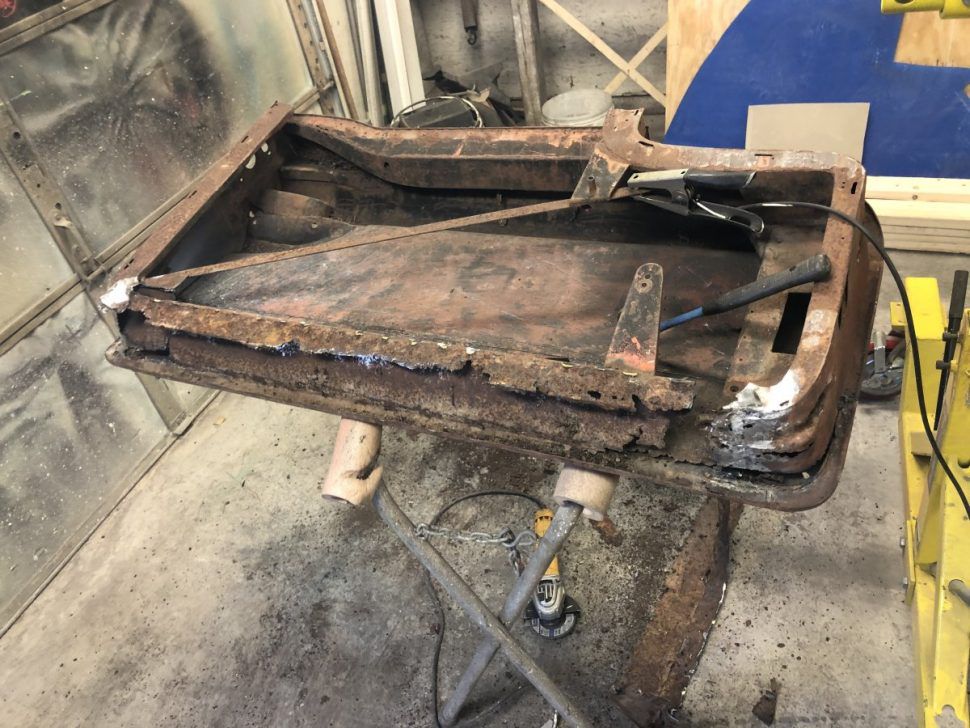 The doors in particular required massive amounts of attention. Note the door handles tucked into where the cove starts at the back of the door. 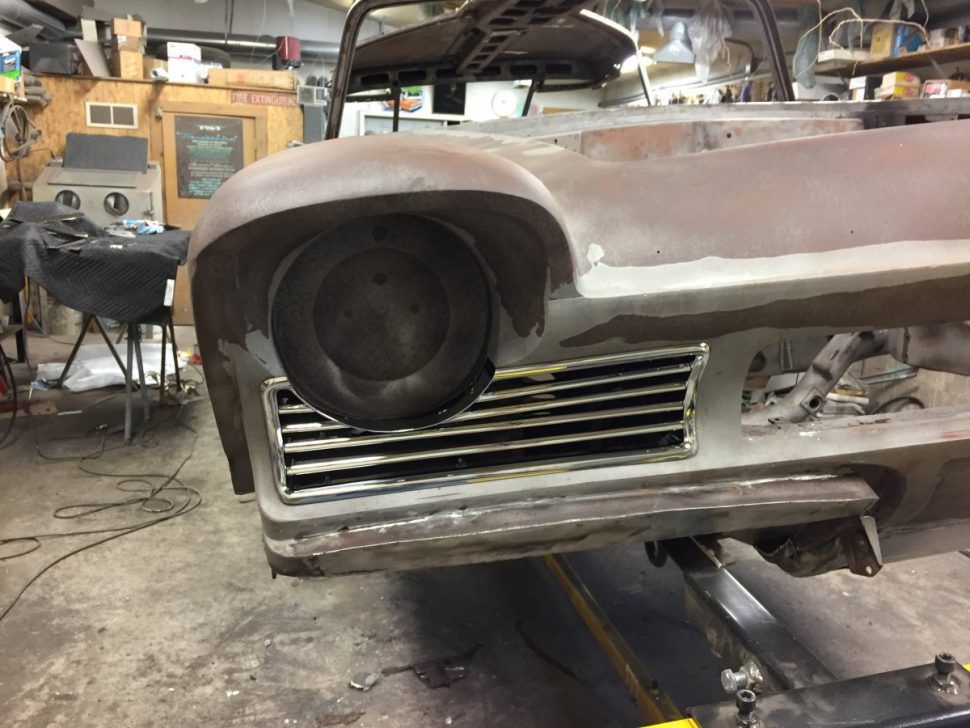 But, as seen with the butterfly panels, Tom is getting to the point where he can start fitting the pieces of rechromed trim, including the individual grilles (which Ford intended to run vertical, but Ghia decided to make horizontal), the functional side exhaust at the back of both quarter panels, the front bumperette trim, and the rear panel trim. 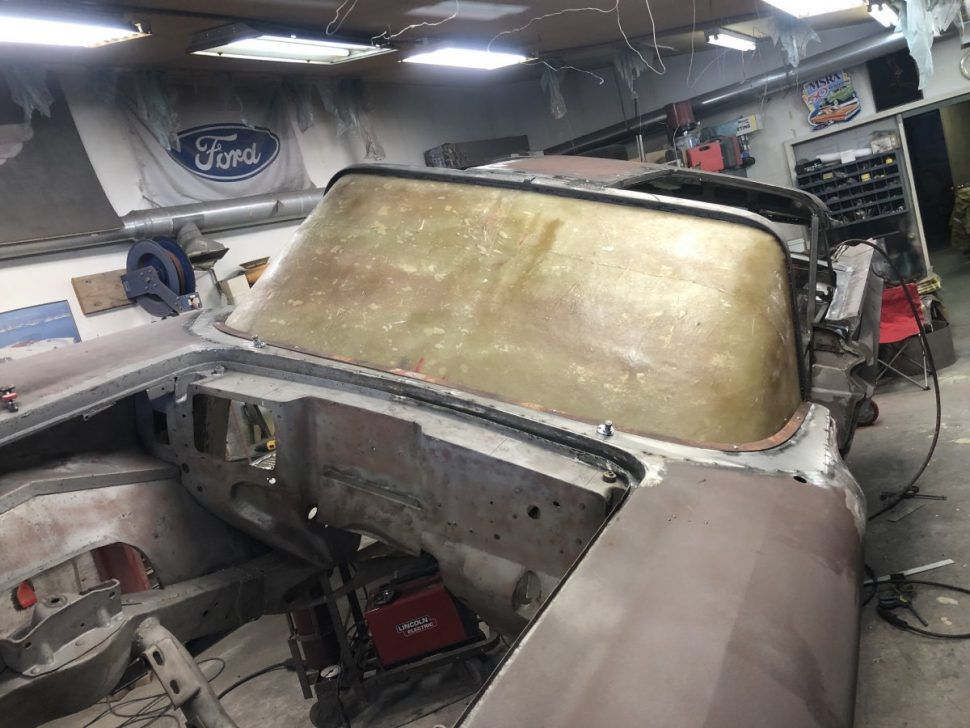 As for the glass, we’re sure Tom would like to have a word with the vandals who smashed it all in while the car sat outside in Detroit later in the Fifties, but not all is lost. As Tom noted, Don DeLaRosa, Ford’s liaison to Ghia at the time the XMTC was built, agreed to help a previous owner out by sending a couple clay modelers out to clay up a windshield for the XMTC. This despite the fact that DeLaRosa had since left Ford to take a position as vice president of design at Chrysler and the clay modelers he sent out were Chrysler employees. According to Tom, the clay model for the windshield came with the XMTC and fit perfectly once he shored up the windshield frame. With the windshield frame and backlite frame finished, Tom reports that all the tinworm replacement on the XMTC is done, thus the Christmas tree atop the car in the lead photo, in the ironworkers’ tradition of christening newly completed building structures.

Tom still has plenty of work ahead of him, but what he’s done in less than two years is incredible. Many thanks to Tom for supplying these photos and for keeping us all updated on his website. We’re definitely looking forward to seeing the finished product.