Ford Probe I. Photo via Christie’s.

They both arose from the same economic factors and in the same general time period. They had some styling similarities, emblematic of that time period. They both relied on collaborations with Ford-adjacent companies. And, of course, they shared the same name. But the series of Ford Probe concept cars came about in pursuit of a far broader objective than just to produce the Ford Probe production car.

By the late Seventies, Don Kopka, an executive stylist at Ford who had designed the 1967 Mustang and (before joining Ford) the 1958 De Soto and who had risen to the executive directorship of Ford’s Advanced and International Design Studio, had taken up Alex Tremulis’ charge and started to focus on making Ford’s products more aerodynamic. His initial efforts at making minor surface changes to the company’s production vehicles resulted in a 1.5-mile-per-gallon boost to the company’s corporate average fuel economy. As he later told Popular Mechanics, traditional engineering tactics would have cost roughly $3 billion to get that sort of result; his approach cost just $10 million.

With that success under his belt, Kopka started to envision a Ford passenger car designed from scratch with aerodynamics as a priority rather than an afterthought. The 1979 energy crisis no doubt helped Kopka get the ear of his colleagues and supervisors, but he also had to prove that an aerodynamically designed car wouldn’t be a mere jellybean and that a fuel-efficient car would have the amenities that a full-size car buyer expected.

Kopka’s Probe I, which debuted at the Frankfurt Motor Show in September of that year, aimed to counter those concerns. Built, essentially, on a Fox-body Mustang platform, it had a turbocharged 2.3-liter four-cylinder under the sharply sloped hood. The main attraction, of course, was the sleek body designed and built in collaboration with Ghia that achieved a coefficient of drag of 0.25. The fully finished interior featured an electronic entertainment center and an ignition system ostensibly activated by credit card. Ford claimed the Probe I would’ve been good for 39 miles per gallon, better than what some modern hybrids get. 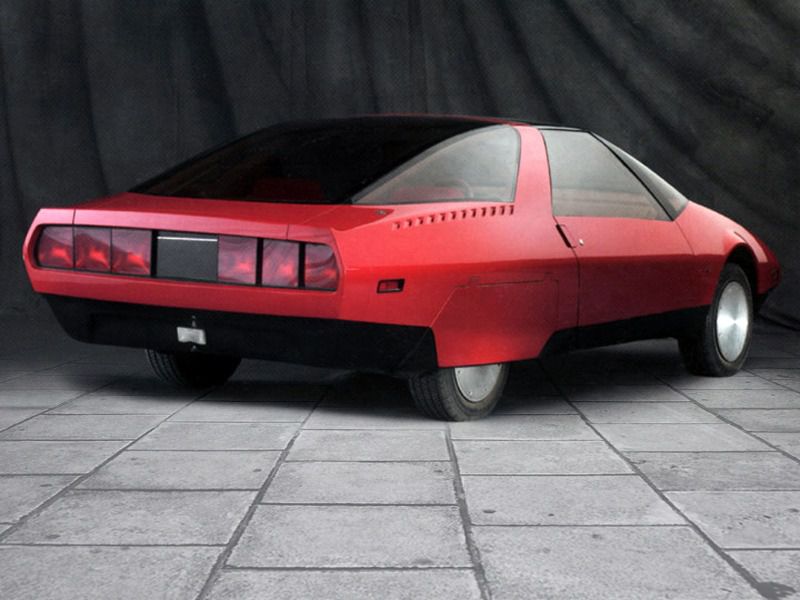 Originally finished in white with clear wheelcovers, it was later repainted red and fitted with what looks to be spun aluminum wheelcovers. By the time Ford auctioned it off along with a few dozen other concept vehicles in 2002, the engine and automatic transmission had been removed. It’s since made its way to the collection of restorer Scott Grundfor. No doubt the success of the Probe on the show circuit helped elevate Kopka to the vice presidency of design at Ford in late 1980.

While we’ve seen some references incorrectly claim that Ford never built a Probe II, that assertion is understandable, given how little information Ford seems to have published regarding the car. An in-house Ford studio photo shows the Probe II in its final form in February 1980, and it certainly appears more production ready than its predecessor with its four-door hatchback body style, non-skirted wheels, non-flush door handles, and side mirrors. A Ford press release from 1980 touted its fuel efficiency but put more emphasis on its safety features.

The Probe III, on the other hand, returned to the Probe I’s focus on aerodynamics when it appeared in 1981. Originating not out of Dearborn but out of Ford of Europe, the Probe III came about as a teaser for the pending Cortina replacement, the 1982 Ford Sierra.

While the Uwe Bahnsen-designed Sierra, noteworthy for its advanced aerodynamics in comparison with everything else on the market (that would later go on to influence the Ford Taurus here in the States), borrowed its general shape and a number of design details from the Probe II, the Probe III in many ways had more in common with the Probe I, particularly in its almost single-minded pursuit of advanced aerodynamics. There’s the skirted rear wheels and the full wheelcovers, of course, but Ford’s designers also incorporated into the Probe III flush-fit composite headlamps, a minimal grille opening, automatically deployed spoilers under front and rear bumpers, minimal wheelwell openings, a full underbody tray, and flush-fitting glass. The Probe III also may be the first vehicle to not only get rid of drip rails but also envision behind-door channels to route away water in their stead.

All those tweaks helped push the Probe III’s coefficient of drag down to 0.22. Not bad, especially for a tall-ish four-door sedan with big ol’ side mirrors sticking out, but Ford wasn’t done yet. 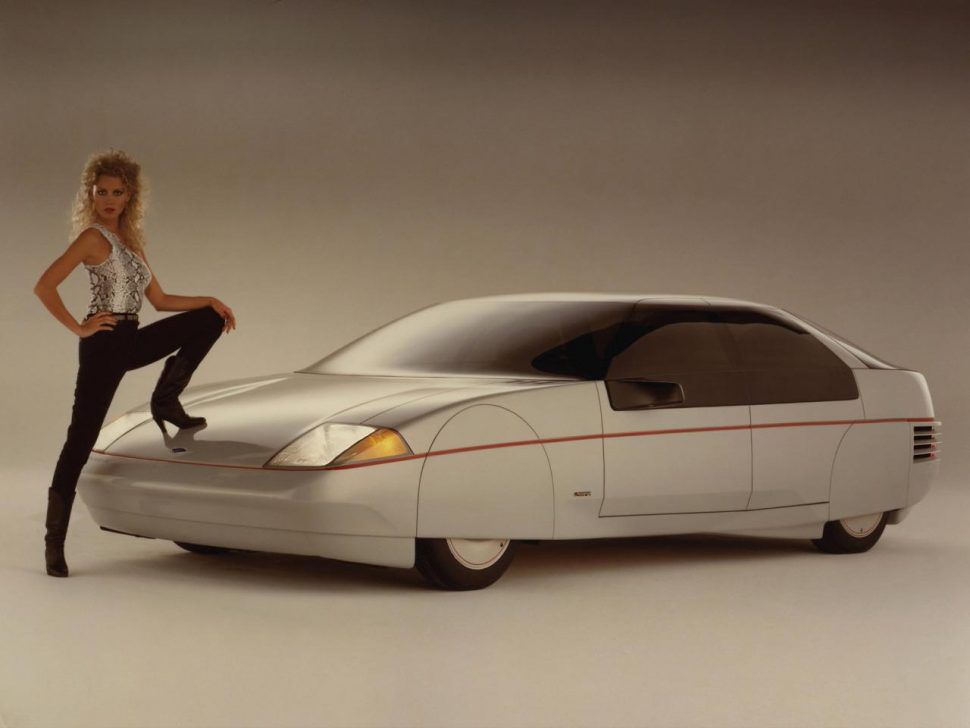 Two years later, Ford seemed to throw everything it had at the 1983 Probe IV, another four-door, front-engine, rear-wheel-drive sedan. Like the Probe III, the Probe IV had a bellypan, retractable air dam, super-skinny tires, and flush-fit headlamps and glass. However, Ford’s designers, with Kopka still at the helm, wanted the Probe IV as low as possible and to present the minimum possible frontal area for its drivetrain configuration.

To achieve the former, they specified semi-reclining seats that brought the roof height down an inch and a half. For the latter, they went even further by moving the radiator and air-conditioning compressor to the rear, leaning the turbocharged 1.6-liter four-cylinder engine from a Ford Escort over by 70 degrees, and developing a special short MacPherson strut front suspension.

The skirts incorporated membranes between the outer covers and the body to allow the front wheels to turn without introducing excessive turbulence from the wheels. The windows didn’t roll down. The badges were flush with the car’s surface. But perhaps the most extreme aerodynamic trick Ford’s designers and engineers added was an active suspension that lifted the rear of the car 6 inches and dropped the front by 4 inches when at speed.

As Kopka told Popular Science at the time, the Probe IV was the first car that Ford developed entirely via computer, but the actual construction at Ghia still proceeded in old-world fashion with hand-hammered steel panels making up the car’s body.

End result: a coefficient of drag of 0.152. Ford built two—a running model and a pushmobile with a full interior—both of which sold at the 2002 auction. 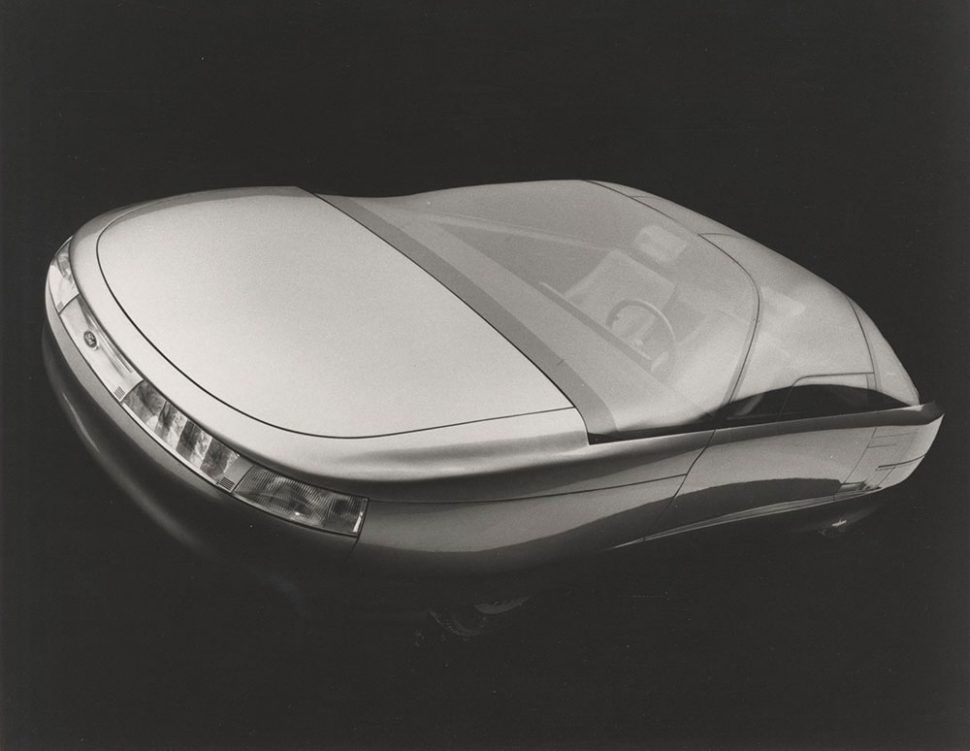 The ultimate Probe concept, the 1985 Probe V, may very well be the most aerodynamic passenger car—that is, non-race car—built. Rather than the front-engine, rear-wheel-drive platform of its predecessors, the Probe V placed its engine behind the rear seat but ahead of the rear axle, similar to the Lamborghini Marzal concept car’s layout. Doing so allowed a smoother cab-forward design that retained the low nose of the Probe IV.

Also like the Marzal, the Probe V’s doors were far from conventional: All three—including the hatch—popped out away from the body on parallelogram hinges and slid rearward. The Probe IV’s skirted and membrane wheels continued on to the Probe V, as did the small openings within the fixed windows.

While the interior ostensibly continued the entire Probe series’ dedication to modern comfort and convenience, it also added a few concept-y features like the heads-up display and the rear seats that rolled up and out of the way like a set of blinds when not in use.

All the aerodynamic work paid off with a coefficient of drag of 0.137, about as good as it gets while still remaining recognizably car-shaped. It too sold at the 2002 auction.

As for the production Ford Probe, it debuted in 1988, but wasn’t supposed to have been called Probe. Instead—long story short—Ford worked with Mazda to essentially develop a version of the MX-6 front-wheel-drive sport-compact coupe into a more fuel-efficient fourth-generation Mustang, initially codenamed SN-16. Only when reports of the Mustang’s upcoming switch to front-wheel drive surfaced and public outcry forced Ford executives to change plans (thus giving O. John Coletti the incentive to develop the rear-wheel-drive SN95 Mustang), did the SN-16 suddenly become the Probe, a name that had some cachet and that was certainly well vetted by Ford’s legal department by then.

When the Probe debuted in 1988 with a coefficient of drag of 0.30, some automotive writers—no doubt spurred on by Ford PR people—noted superficial similarities between the concept cars and the production car (aero mirrors, recessed door handles, flush-fit glass, hideaway headlamps), pretty much all of which had become standard fare for production cars or would soon be. Sure, if you squint, you might see some concept car influence on the production Probe’s slanting hood and greenhouse over both generations of Probe, but nothing suggests any more of a link between concept and production versions.

Instead, one could argue, the spiritual successor to the line of Probe concept cars was actually the Ford Taurus, a car that implemented all of the company’s best aerodynamic practices in the guise of a comfortable and well appointed family sedan. We see this connection in the lineage of the Probe III, Sierra, and Taurus, as well as the fact that Ford introduced the Probe V right around the time of the Taurus’s launch to highlight the amount of aerodynamic research that went into the latter’s design. And, whether coincidental or not, the Taurus’ lead designer, Jack Telnack, rode that car’s success to the same vice presidency of design position that Kopka vacated when he retired in 1987.

While not the whole collection, two of the five concept cars—the Probe I and the Probe V—as well as the 1982 Ghia Brezza went on display earlier this month on the Petersen Automotive Museum’s third floor, amid the museum’s concept renderings display.

For more information about the Petersen, visit Petersen.org.