It’s a good bet that plenty of auto renderings from 1945 until, oh, 1979 or so – particularly the far-out space-agey ones of the Fifties – operated on the designer’s assumption that nuclear power would soon make all of our energy dreams come true and, conveniently, erase the auto designer’s need to consider fiddly things like drivetrain packaging.

Far fewer designers actually came out and stated their renderings specifically would make use of nuclear power, however, and that’s likely because once they started to think about it, they realized it wasn’t as simple as waving a magic wand to make that happen. Take, for instance, the Nucleon rendering Al Mueller did for Ford, dated March 1956. As Jim and Cheryl Farrell noted in their book Ford Design Department Concepts and Showcars, 1932-1961, the 1958 Nucleon concept came from Jim Powers, an Alex Tremulis recruit. Though the Nucleon wasn’t based on any sort of engineering studies, Powers figured the power nacelle would need all sorts of lead shielding, which the cantilevered passenger compartment was supposed to balance out.

Powers’s finned cantilever-roof design is the one that eventually made it to the 3/8-scale fiberglass version we’re all familiar with, but it appears Mueller took over the Advanced Studio right around the same time he made the bubbletop, de-finned rendering above. According to the researchers at American Dreaming, the rendering hung around Ford’s studios for some time afterward, then made it out of the building when a high school student with car designer aspirations visited Ford’s design department and was given the drawing. That high school student later attended the College for Creative Studies and in turn gifted the rendering to a fellow industrial design student, Bob Smart.

Mueller, who greenlit George Lawson’s Mini-Max designs for Ford in the Sixties and whose Lincoln-Mercury studio won the internal competition at Ford to design the Mustang II, remained at Ford until retiring in 1987. 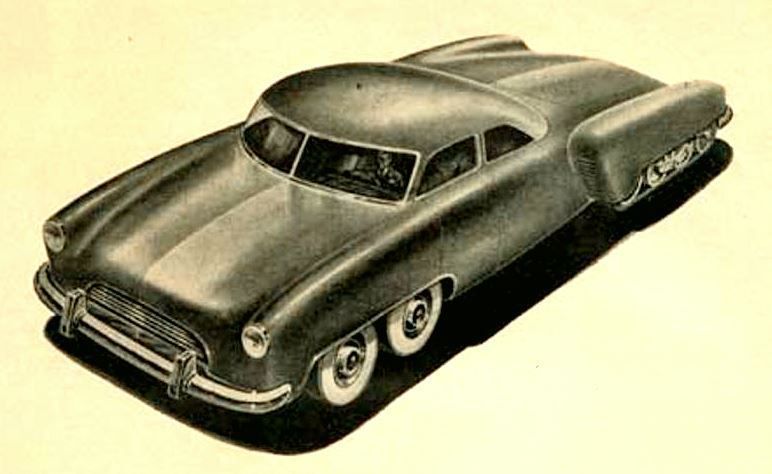 Tremulis, as mentioned above, also took a stab at a nuclear-powered car with the Seattle-ite XXI, a full-size concept car displayed in the early Sixties that envisioned another approach to handling the weight of a nuclear reactor and its attendant shielding on a car chassis: four wheels up front to spread out the load. It’s a rather ingenious and out-of-the-box idea, one that he may have cribbed from one of the home mechanics magazines in the Fifties.

We’re not sure of the exact source, but the rendering is a fanciful one (dual front axles and a half-track rear? I mean, it’s not not awesome…) based on statements from a “noted atomic scientist” who posited that a nuclear-powered vehicle would measure roughly 20 feet by 40 feet “and weigh many tons” to shield the occupants from radiation. 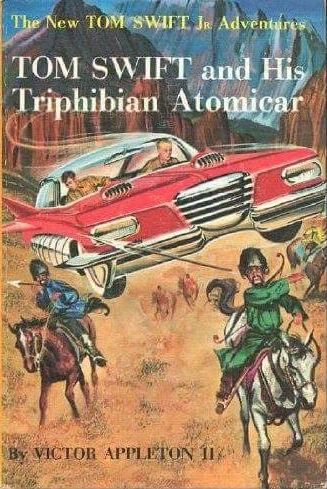 Like the above renderings, Tom Swift’s Triphibian Atomicar, as Victor Appleton described it in 1962, was explicitly envisioned to run on nuclear fuel, even if it was far more fanciful than the above renderings. Aside from the fact that Swift designed it to fly, float, and drive, he also didn’t seem to bother addressing the weight of the nuclear powerplant. That’s mostly because the nuclear power plant was some sort of “Atomic Power Capsule” that just sorta worked without explanation, according to TomSwift.info, a site whose author seems to desperately want to believe all of Tom Swift’s inventions could be made real.

Maybe someday, in a far-flung future, we can get back to imagining nuclear-powered half-tracked flying cars and the resultant Blinky-inhabited streams.