Long before anybody’s wildest imaginations could have conceived of Chrysler (not to mention Dodge and Jeep) becoming part of a multi-national carmaking company that included some storied Gallic brands, perhaps one of the most important Chrysler concept vehicles of the Nineties intentionally evoked the design and feel of one of the most important Citroens of all time.

At first glance, the CCV, introduced at Frankfurt in December 1997, looks like little more than another pre-millennium exercise in retro looks, albeit one that aped a popular car that Chrysler had nothing to do with. By all accounts, Bryan Nesbitt intentionally designed the CCV as an homage to the “Tin Snail” and the name (two Cs and a V), though deployed as an acronym (Composite Concept Vehicle), could hardly be mistaken as anything other than an evocation of the Citroen 2CV.

But Nesbitt and Chrysler’s Ken Mack saw far more to the design than mere nostalgia for nostalgia’s sake. Sure, there was the rollback roof and ultra-simple touches throughout: slides for the windows instead of cranks and regulators, Jeep-like hood latches, and removable rear seats. But they also intended the CCV to serve as a sort of world car, something Chrysler could build for developing countries around the globe—specifically in Asia—quicker, cheaper, and using unskilled workforces. 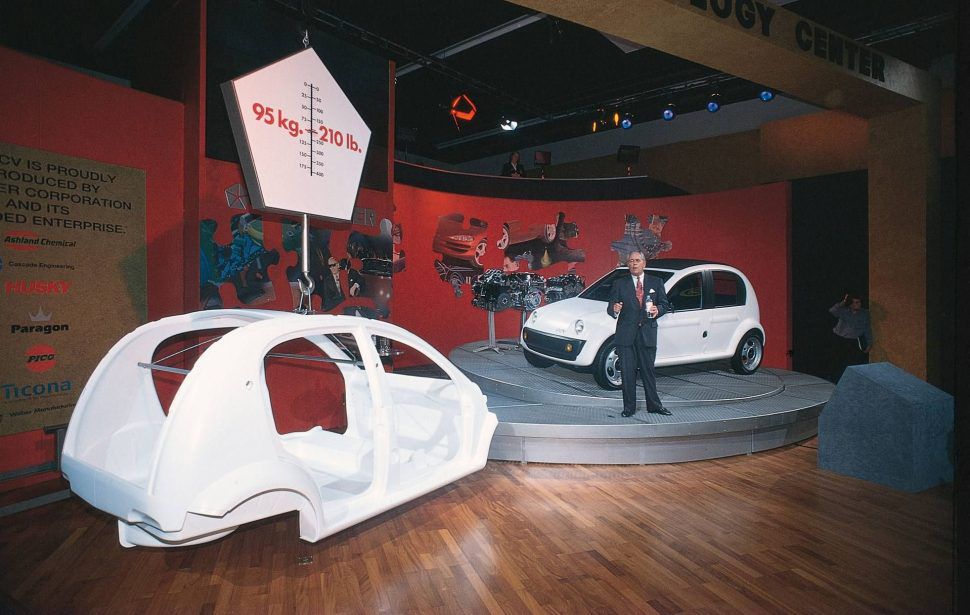 Chrysler based those claims on two factors. First, the CCV was to set the standard for Chrysler’s supplier partnership program. As DesignNews noted, Chrysler President Thomas Stallkamp’s Extended Enterprise concept proposed relying on “teams of suppliers to do the engineering and development work on new cars… The CCV would have been the ultimate test.”

While Nesbitt designed the CCV and Mack managed its development, it fell to plastics manufacturer Ticona to develop the resin for the CCV’s injection-molded body, to Husky to construct the 8,800-ton $10-million injection-molding press, to Paragon Die and Engineering to make the molds for the body, and to several other companies—including Ashland Chemical, Cascade Engineering, Paragon, PICO, and Weber Manufacturing—to work out the details of how the CCV would be built. Chrysler even turned to Briggs & Stratton to provide an air-cooled 25-hp 800cc V-Twin to power the CCV. 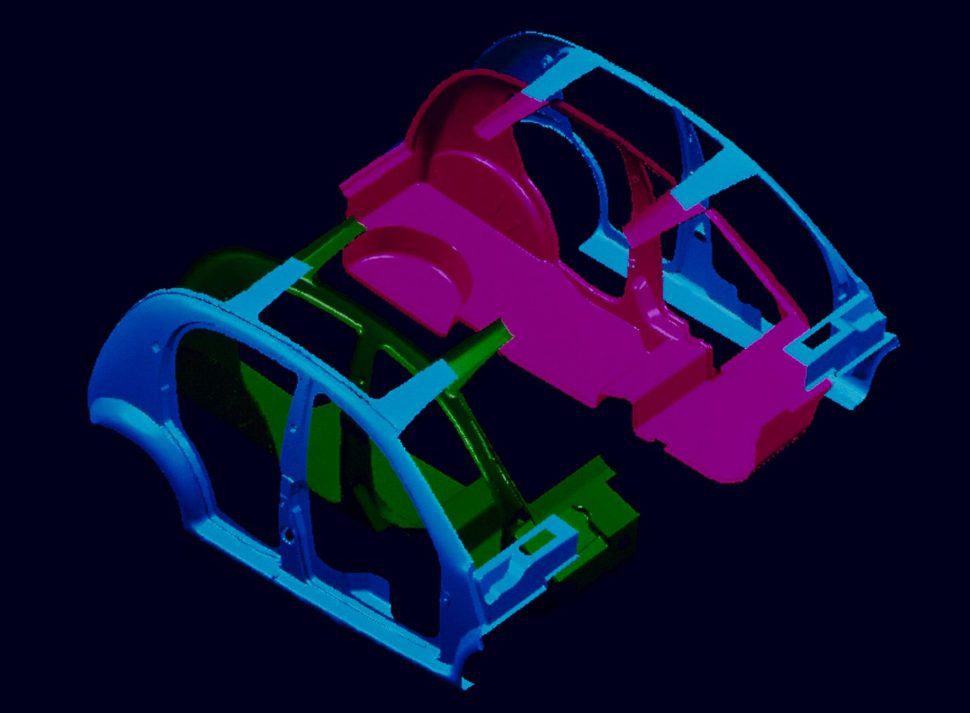 Second, the CCV was to be a testbed for producing a lightweight, fully recyclable car body composed entirely of polyethylene terephthalate (PET), or the same plastic used to make soda bottles. As AZO Materials wrote, Ticona’s work on resins and polymers for the CCV resulted in a four-piece body shell that could be bolted and bonded together in 6-1/2 hours using basic assembly techniques (versus a roughly 80-piece steel body that required 19 hours to assemble), that weighed 210 pounds, that was sturdy enough for vehicular use, that was inexpensive (about $1.50 per pound), and that could hold its impregnated color throughout the molding process. In addition, plants dedicated to building the car would only have to be 1/10th the size of traditional auto assembly plants and the tooling would cost 1/3rd that of traditional auto assembly tooling.

(Regarding the recyclable aspect to the CCV, Chrysler had already introduced concepts like the 1991 Dodge Neon concept and the 1992 Jeep Ecco concept that were intended to be fully recyclable. Those other concepts, however, employed multiple recyclable materials, each encoded with their material types to make it simple to break down and sort the components at the end of the vehicle’s life.)

Several test cars have been made that can successfully navigate the rutted back roads in places like Africa and Brazil. End use performance aside, the CCV project provides 210 pounds per car of new proof that you can mould large automotive body parts to close tolerances with an affordable resin. It can provide automotive manufacturers with a solution for dramatically simplifying production and taking cost and weight out of their mainstream vehicles.

When completed atop its front-wheel-drive 101-inch-wheelbase chassis, the CCV weighed in at just under 1,200 pounds, returned 50 miles per gallon, topped out at 70 mph, and would have cost around $6,000. At the time a basic, no-frills Neon weighed about twice the CCV and cost about $11,000.

Chrysler and its suppliers expected to have the CCV ready for production as soon as 2001. While the CCV wouldn’t have come close to passing U.S. or European crash standards, it wasn’t intended for those markets. Rather, Chrysler intended it to fill a role much like the Tata Nano: a step up from bicycles and motorcycles, but not as expensive as a full-size automobile. What doomed it, according to DesignNews and Allpar, was the DaimlerChrysler merger, announced in July 1997. “The entire (partner) process was theoretical, and required a lot of time and patience,” DesignNews wrote. “Daimler did not have the culture of working with outside engineering partners to the extent of Stallkamp’s Chrysler.” 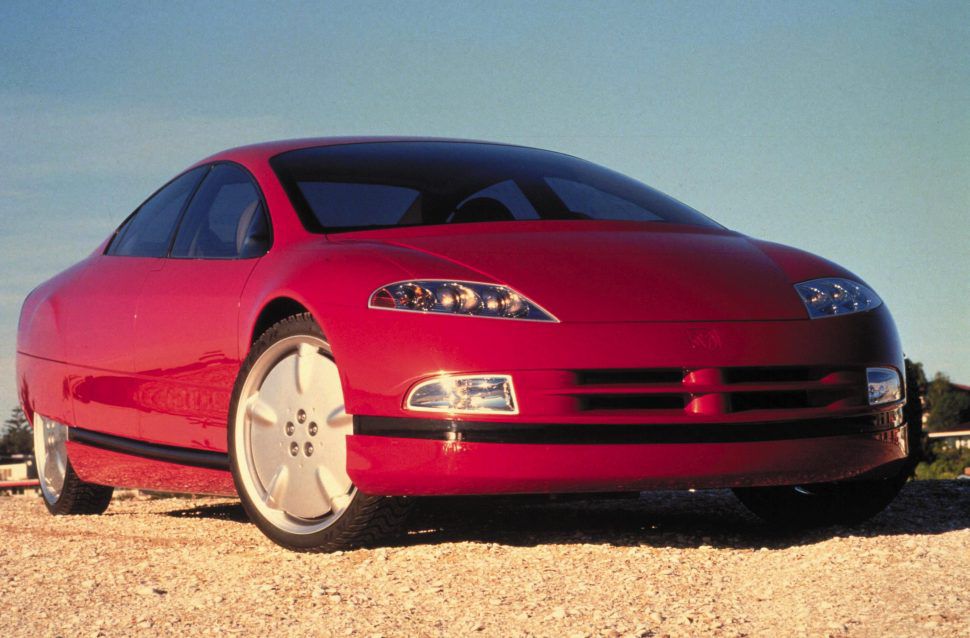 A few other concepts using the CCV’s PET-body technology trickled out, among them the 1998 Dodge Intrepid ESX2 with aluminum reinforcements in the body, the 1998 mid-engine Plymouth Pronto Spyder, and the 1997 Plymouth Pronto that served as a precursor to Nesbitt’s PT Cruiser design. Chrysler also ended up using the process to mold hardtops for the Jeep TJ Wrangler. Despite the CCV’s grand ambitions, DaimlerChrysler quietly shut the project down shortly after.

A couple years later, the Museum of Modern Art hailed the CCV as “an ingenious example of a car designed from scratch for developing nations” and included it in the museum’s “Different Roads” exhibit alongside the 1997 Mini Millennium concept, Ford’s Ka production car, Audi’s 1999 AL2 concept car, and a DaimlerChrysler smart car.

Perhaps with the pending merger, the CCV might warrant another look as PSA combs through the Chrysler archives.