[Editor’s Note: This story on the much-modified third-gen Pontiac Firebird that we recently highlighted as a Hemmings Find of the Day comes to us from contributor Jim Koscs.]

As a kid, did you try to draw cars that combined features of several favorite models? Dmitry Khudobin gets inspiration like that today. He’s got a book full of designs, and, working with his brother, Arkady, brought one of them to life.

The car, which could pass for a long-lost Ford or Mopar concept, or perhaps something with an Australian accent, is in fact a 1984 Pontiac Firebird wearing new duds. Well, make that new, 1970-ish looking duds. The Khudobin brothers set out to build their own expression of a classic muscle-ponycar on a more modern platform for everyday driving. After Hemmings Editor Daniel Strohl saw it in our classifieds and made it a Hemmings Find of the Day, we dug a little deeper.

The Khudobin brothers emigrated to the U.S. from Ukraine 30 years ago, following the collapse of the Soviet Union. Settling in Florida, they found American muscle cars tantalizing. Dmitry, a 3D animator and graphic artist, also admires classic Italian sports cars. Arkady, who collects and restores muscle cars, loves the 1971-1973 Mustang fastback, a car that would be a critical influence on their project.

The brothers have a business making custom fiberglass fairings for Harley-Davidsons and Japanese cruisers. Combining their skills to build the car over a 10-year period, they completely changed the Firebird’s look, including the cabin, without altering the unit-body structure.

“The idea was to create an affordable conversion kit, also with the idea to produce a limited number of cars ourselves on the third-generation F-bodies,” says Dmitry. “Ten years ago, those cars were plentiful and cheap enough.”

Soon after the Khudobin brothers began their project, however, the recession took hold and made their business case tougher. Meanwhile, the retro-tinged Mustang, fifth-generation Camaro, and revived Dodge Challenger were winning buyers with modern performance capability and new-car warranties.

The Car with No Name
Still, the Khudobin brothers strongly felt that some enthusiasts would find appeal in a car that distilled design elements of late-1960s and early-1970s models.

“We were essentially sampling other cars, but with our own expression,” says Dmitry. “We did not want it to be specifically a Ford, GM, or Mopar design. We wanted to make a mix so the car could appeal to a lot of people.”

Firstly, the Khudobin’s custom has no name. They tried a few, and you can see “Tornado” on an early dashboard mock-up, for example. In the end, they decided that any name might only confuse people, which was not their intent. A “GT” badge in the grille and “SS” logo on the glovebox door are there, more or less, as decoration. The car is registered and insured as a Firebird.

Despite the GM platform, the car’s design seems dominated by Ford and Mopar themes. The front clip, which attaches to the factory mounting locations, recalls not only the 1971-1973 Mustang, but also the 1969 Shelby Mustang that inspired that car. The ’70-’74 Barracuda and ’71-’74 AMC Javelin had a similar look, and one could argue that the creased lines owe something to the 1969 Camaro, as well. If the car also made you think of the early ’70s Australian Ford Falcon XB GT coupe, that was intentional. Up front, you’ll find Mopar influence. The deep-set grille with tunneled headlights was inspired not by a muscle car, but by a big sedan, the 1971 Plymouth Fury. For a modern touch, the headlights are aftermarket replacements for mid-1990s BMW 5 Series, with halo rings that illuminate with the parking lights.

Front fender gills are an homage to those on the ’71 Barracuda, but placed ahead of the wheel. They’re functional, too, containing amber lights that illuminate with the parking lamps. A front three-quarter view of the Khudobin’s custom hints at the bodyline and stance of the 1971-1974 Dodge Charger, and Dmitry says the faux louvers covering the Firebird’s B-pillars are a nod to the ’73 Charger SE model. Picture the car painted silver, and there’s also a bit of a DeLorean vibe. The sweeping fastback roofline is slightly less extreme than that of the ’71-’73 Mustang and actually uses that car’s back glass. Arkady happened to have an extra, but it’s a readily available part. Coming around to the rear, the overall shape shouts 1969-1970 Mustang Mach 1 and Shelby. The custom-made slotted taillights pick up a popular look from that period, but their origin is pure customizer’s improvisation. The brothers had been thinking along the lines of early-1970s Torino or Mercury Montego lights, and then inspiration appeared in a salvage yard.

“In the same month, we saw two Dodge Stealths there,” recalls Dmitry. “The middle section between the taillights is just a reflector, but it was the right length for the taillights we wanted. We took those and removed the silver paint from inside.”

The tailpipes were another salvage-yard find, taken from an early 2000s Cadillac Deville.

“We had to buy the whole exhaust, because they’re welded on,” says Dmitry.

The gas cap came from a modern Dodge Challenger.

“It was perfect, because it just says “Fuel” on it, not the Dodge name,” he says.

The Build
To translate the design to the Firebird’s body, the brothers started by welding 1/8-in thick metal wire to form the contours. To that, they welded tin plates, and then Arkady filled in with Bondo and shaped. They took fiberglass molds from the finished body and then removed all the Bondo and metal to use the Firebird’s shell.

“It was a very clean, non-rusted body with a non-running engine,” says Dmitry. 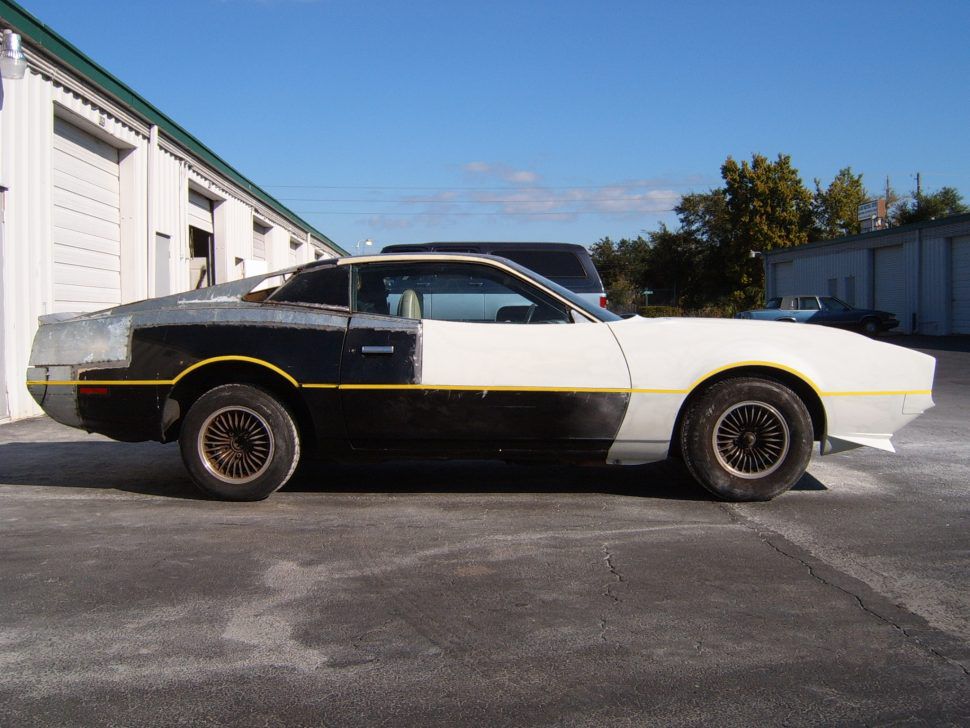 You’d be hard-pressed to find much of the Firebird in the Khudobins’ coupe. The windshield, roof, and doors are original, but the rest of what you see is their work. To get a narrow side window, they reshaped the door and rear fender profile, raising it by about 1.25-inch.

The rear clip is one-piece, incorporating the fascia and fenders. After removing the Firebird’s glass hatch and rear bumper, the entire piece could slide over the rear quarters to meet up with the doors. To support the rear glass area, ¾-inch square steel tubing is welded in, running from the roof corners to the corners of the quarter panels.

The metallic blue paint might look like a classic muscle car color, but it’s a modern Toyota hue called Electric Storm Blue. The brothers’ admired it on a neighbor’s 2017 Toyota RAV4.

The Khudobins’ conversion approach was similar to that of Simpson Design in Washington State, which makes Mazda Miata-based sports cars inspired by Italian classics. Not surprisingly, the brothers are admirers of Simpson’s work.

Italian Flavor Inside
The Khudobins had not planned to redesign the Firebird’s interior, but it became a necessity.

“We originally wanted to do just the outside panels, but the windows were too tall for the look we wanted,” Dmitry says.

Once they decided to raise the door line, that also meant making custom inner panels. From there, they went all-in, making a custom dash, center console, roof console, and rear panels.

This gave Dmitry a chance to design something inspired by Italian GTs, including his favorite, the late-’60s Maserati Ghibli. His design is much more cohesive and sophisticated than the Firebird’s dash.

They first made a dash to use Autometer gauges but then decided to go for a more modern look. A 1996 Chevy Caprice, sourced for its 5.7-liter LT1 small-block V8 and automatic overdrive tranny, would also give up its gauge cluster, which has a digital speedometer and four small analog dials. The brothers had to modify the center of cluster to fit into their dash. The outer HVAC vents came from a Pontiac G6, while a Mitsubishi Eclipse donated the center vents.

The finishing touch is a gearshift handle that Arkady picked from an early 2000s Mercury Sable LS.

There’s no doubt that the Khudobins unique creation could spark conversations at a cruise night or car show.

But would Ford, GM, or Mopar partisans embrace a custom car of such mixed design parentage – and based on a GM platform? We’d love to see how this story turns out.