Motor Medic doubled my 1951 Mercury’s oil mileage. But my teen brain reasoned it was cheaper to buy 10-cent cans of oil and store them in the trunk.

“Stop that, you’re stinking up the neighborhood!” Dad admonished as I goosed the flathead V-8.

In addition to the powerful odor of unburned gasoline and blue smoke from scorched rings, the 1951 Mercury’s mufflers produced sonic booms that irritated parents’ and neighbors’ eardrums.

I hate to admit it, but several cars I owned—starting with the Mercury—had smelly, loud exhausts.

I loved the noise and smells, of course. But I disliked getting only 100 miles to a quart of oil, which forced me to store cans of cheap oil in the trunk. Something had to be done. So I drove to the neighborhood Texaco station and asked for advice.

“How much is a ring job?” I asked with trepidation. When he told me $200, which was a lot more than I paid for the car, I asked if there was a cheaper solution. Taking me into the office, he pulled a bottle off a shelf.

“Here, pour this into your crankcase,” he said. “It will solve the problem.”

That bottle of Motor Medic, which looked and poured like molasses, did exactly what he promised. Now the Mercury got 200 miles to the quart of oil. But at $2 per bottle, my teen brain realized it was cheaper to buy 10-cent quarts of oil than to “medicate” the flathead V-8.

It wasn’t that way as I grew up in the early 1950s. Cars were primitive by comparison and windows and vents were open most of the time. The stink of New Jersey’s Route 22, a dangerous cement ribbon linking the Holland Tunnel under the Hudson River with the Phillipsburg Bridge over the Delaware River, was indelibly embedded in my brain.

The smell got worse near Bayonne and the Meadowlands, where odors from swamps and pig farms joined with those from diesel trucks and pre-smog-controlled cars. My friends and I had contests to see who could hold his breath the longest to avoid inhaling fetid air.

Dad was a Pennzoil man
“This is the best oil, Jim,” Dad told me as he poured a quart of Pennzoil into his Chevrolet’s crankcase. For some reason, he believed the finest oil came from deep under Pennsylvania farmlands. Its gold color and sweet smell made a lasting impression. Looking back, I admire him for religiously changing the oil every 1,500 miles and checking its level weekly.

Dad introduced me to engine additives when, once yearly, he threw in a quart of Rislone. He may have been impressed that Admiral Richard Byrd used it in his plane during the first South Pole expedition in 1928. Its strong odor—I thought it smelled like kerosene—got the “sludge out” and “sealed the rings.” What was “sludge,” I wondered? And were engine “rings” like those worn on fingers? These questions would be answered in time.

The Motor Medic experience encouraged me to experiment with additives designed to fix every car problem known to man. Like a kid in a candy shop, I studied claims made on cans and bottles lining service station walls. The Mercury was a great “guinea pig” for testing whether they worked. The car needed so many “fixes.” Everything leaked or dripped including radiator, crankcase, water pump, carburetor, transmission, differential, and tailpipes, to name a few. 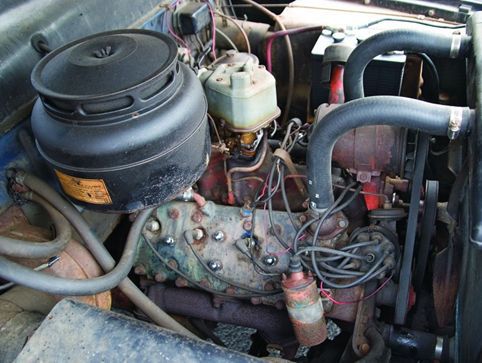 My Mercury’s flathead V-8, like this one, had more leaks than I could count. Fuel pump, radiator, crankcase, transmission…everything needed additives. Hemmings photo.

I didn’t understand at the time, but Motor Medic increased the oil’s viscosity. By making it thicker, oil had a tougher time squeezing past old valves and worn piston rings. The downside, however, was hard starting and clattering valves during winter months. Lesson learned: only “medicate” during hot months.

The Mercury’s radiator died from a thousand leaks. Most resulted from loose caps that couldn’t hold pressure. The remaining leaks were the product of a rusted-out core and worn hoses. I dropped stop-leak “pellets” into the radiator but they only made matters worse by further blocking clogged water channels.

Hose rubber glue and heavy-duty tape didn’t work well on tiny holes, which occasionally popped open and sprayed antifreeze in all directions. On one occasion, a thorough soaking ruined the generator. The reconditioned radiator I purchased and installed lasted three months. It, too, leaked like a sieve.

The nailhead that clattered
My 1955 Buick’s “nailhead” V-8 was the smoothest engine in any car I owned. But a valve lifter clattered annoyingly on start up. The tick-tick-tick drove me crazy. The noise went away after a few minutes, but it worried me and I looked for a solution. Dad’s Rislone helped, but the clatter persisted.

Quite by chance, I discovered a cheap solution that worked. Staring at the little red bottle on a store shelf, I was intrigued by the product’s name: “Marvel Mystery Oil.” Not waiting to drive home, I poured the liquid into the crankcase and listened. Voila! No more clatter on start up.

The nailhead V-8 in my 1955 Buick was a smooth-running engine but a valve lifter clattered on start up. Marvel Mystery Oil cured the problem.

Years later, after Grace and I married and started a family, I drove a 1965 Plymouth Valiant with slant-six and three-speed manual. It may have been the best car I ever owned. But after the odometer turned 150,000 miles, oil consumption and tailpipe smoke became a problem.

I tried different products to eliminate the “smoking” including Bardahl, which bragged about its “polar attraction” formula, Casite and others made up of solvents and detergents that supposedly “rinsed” the engine of contaminants.

About that time, a race car driver I admired, Andy Granatelli, appeared in TV ads for a product called STP Oil Treatment. He swore by the slippery liquid and bragged about Mario Andretti using it in the car that won the Indianapolis 500. It was cheap and doubled the Valiant’s oil mileage from 500 to 1,000 miles per quart. The engine ran quieter and smoke-free, too.

The Slick-50 years
Around 1982, the notion of coating engine parts with Teflon to reduce friction appealed to me. Much like the TV ad showing an omelet cooking in a non-stick pan, I visualized the benefits of using a product called Slick-50.

This was serious stuff, I discovered, after my Slick-50 “kit” arrived in the mail. For about $35, I received two bottles—one filled with a “conditioner” and the other containing the special “oil”—and elaborate instructions. Following the latter to the letter, I poured the “conditioner” into Grace’s Ford Crown Victoria station wagon’s crankcase and drove 100 miles to prep the engine.

After draining old oil, I put in new oil plus the can of Slick-50. Would the product “bond to metal parts” and “reduce friction by 50 percent for 50,000 miles”? The Crown Vic’s 5.0-liter V-8 ran as smooth as silk. Of course, it did that before I added Slick-50. But I was convinced it ran better and would last forever. (The car might have done just that had it not been stolen and wrecked in a high-speed chase after a robbery.) 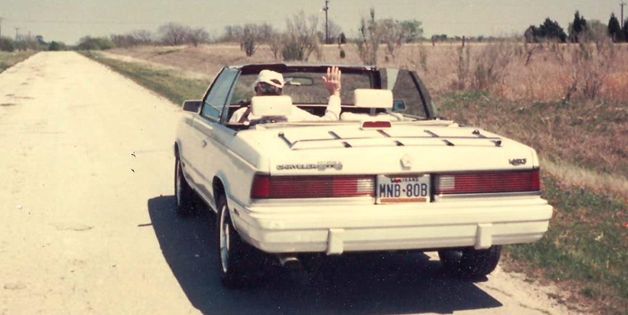 Three turbo cars I owned, including this 1986 Chrysler LeBaron, may have benefited from Slick-50’s Teflon engine coating.

In subsequent years, I performed the same ritual with other cars, including a 1984 Plymouth Colt turbo, 1985 Dodge GLH turbo, and 1986 Chrysler LeBaron turbo. The turbos especially needed the Slick-50 treatment, I reasoned, to reduce wear and heat.

I got off the Slick-50 kick when I read that consumer groups tested the substance and determined it might not be all it was cracked up to be. They recommended using quality oil—especially the synthetic variety—and changing it at the manufacturer’s recommended intervals. A cost analysis indicated it was cheaper to follow this advice and I switched to synthetic oil.

I ‘medicated’ gasoline, too
My early cars not only smelled but they knocked.

It was embarrassing, especially when I floored my 1956 Plymouth at a stop light and the V-8 sounded like a meat grinder crushing walnuts.

“You’ve got bad gas, Jim!” Dad opined, and he wasn’t referring to me. “You’ll ruin your engine if you don’t do something.”

So I did something and bought my first can of Wynn’s Friction Proof. It didn’t cure the problem. Logic told me I needed high-test gasoline, which not only eliminated knocking but gave the engine more power. This worked…but the eventual downside was burned valves. 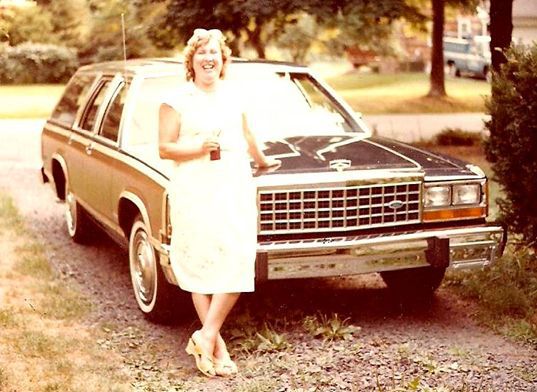 Grace’s 1983 Ford Crown Victoria’s 5-liter V-8 knocked at highway speeds. Only an occasional can of Gumout and high-test gasoline cured the problem.

Other cars knocked over the years, including a 1961 Valiant six, 1963 Rambler six, and 1966 Chevy II six. Perhaps the worst offender was Grace’s 1983 Crown Vic, its V-8 pinging in overdrive at highway speeds. Experiments with different additives lead me to Gumout, which, when combined with an occasional tank of high-test, reduced knocking. By the mid-1980s, most car engines had computer “knock sensors” that eliminated the problem.

For some reason, especially during winter driving, my cars suffered from water in fuel lines. Dad’s advice was to “always keep your tank half filled.” But I wasn’t so good at that and instead relied on alcohol-based additives such as “Dry-Gas” and “HEET.” On occasions when that approach failed, I stupidly directed an electric hair dryer at frozen fuel lines.

Today’s engine oils and gasoline have plenty of additives, which means it’s probably unnecessary to “treat” or “medicate” your car. I’ve used synthetic oil for decades and several of my cars have gone well past the 100,000-mile mark—even more than 250,000 miles—without burning oil or needing an overhaul.

Although I seldom use them today, I still examine engine additive labels when visiting auto stores. Maybe there will be a day when I can buy an additive that promises 100 miles to a gallon of gasoline…or one that doubles my engine’s horsepower…or maybe even eliminates ozone-killing emissions…or….?

The 1996 Mercury Grand Marquis that now belongs to my son-in-law has had a steady diet of synthetic oil since new and is still going strong with more than 250,000 miles on the odometer.