Bertone was once one of the greatest Italian design and coachbuilding houses. Its credits include styling icons such as the Lancia Stratos, Lamborghini Miura and Countach, and the incredible Alfa Romeo BAT concept cars. That short list in no way does justice to Gruppo Bertone’s 100-plus year history of design and manufacturing, and with a resume as impressive as the company’s, its fall was tragic. Gruppo Bertone filed for bankruptcy proceedings in 2014 (and was later resurrected as Bertone Design), but the irreversible decline started years earlier. And amid the turmoil was an ambitious 2009 coachbuilding project called the Mantide.

Based on the Chevrolet Corvette ZR1, the Mantide (pronounced Man-tih-day) was the styling creation of Jason Castriota. Castriota achieved fame in the design world by working on the Maserati Birdcage 75th anniversary and penning the Ferrari P4/5 by Pininfarina. In late 2008 he left Pininfarina to join Bertone as Design Director and, presumably, began working on the Mantide shortly thereafter.

By 2008, however, Bertone was not in good shape. Nuccio Bertone, the man who grew his father’s company exponentially in both size and influenced, died in 1997. He left the company to family, with most of the coachbuilding and styling house (two separate entities) going to his wife Lilli, his two daughters, and his two sons-in-law. None of them had significant design, manufacturing, or management experience. Road & Track chronicled the downfall in with incredible detail, but the short version is that by 2009 all of the manufacturing contracts were finished and years had gone by with no new business. Carrozzeria Bertone, the factory outside of Turin, Italy, went into court-ordered bankruptcy management by a tribunal in 2007 and was sold to Fiat in 2009 (it is currently home to the Maserati Quattroporte and Ghibli).

Stile Bertone was still alive and kicking, even if the factory was gone, and began teasing a special one-off car known as Project M that would be revealed at the 2009 Shanghai Auto Show using a bespoke website (you can see the homepage on the Wayback Machine),  YouTube channel, Facebook page, and Twitter account (currently locked with only 5 followers). The YouTube videos chronicle the ideas behind the car, from its advanced aerodynamics to the design and building process, framing Castriota as the star and primary on-screen personality.

Project M was based on the new Corvette ZR1. Bertone left the engine and chassis untouched but created all-new bodywork made of carbon fiber along with a new interior. At around 220 pounds less than the Corvette, with a lower coefficient of drag, the Mantide claimed a top speed of 217 mph, 12 more than the ZR1.

In April 2009, the Mantide was revealed to the world in Shanghai as a static model, followed up by an appearance of the full running prototype at the Concorso d’Eleganza Villa d’Este in Lake Como, Italy, a week later. It featured BAT-like rear styling, with a pinched tail and pass-through arches, and dramatic dihedral-opening doors. April was also when Michael Robinson joined Bertone as Design Director, following a 19-year run at Fiat. 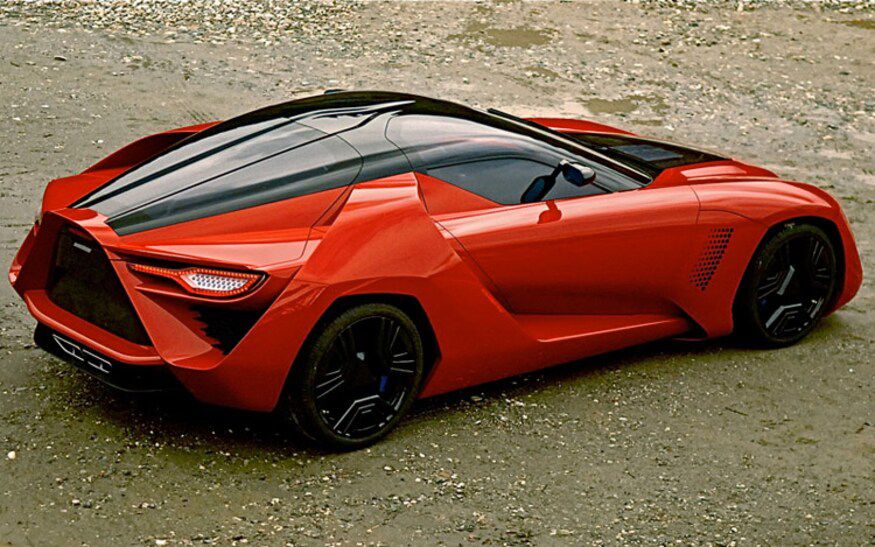 In May, Autocar reported that Bertone might build as many as 10 copies of the Mantide for a cool $2 million – more than the price of a Bugatti Veryon. Following the car’s appearance at the Goodwood Festival of Speed, rumors spread that Jay Leno was interested and was already third or fourth in line. In December another Autocar report stated the second Mantide was sold to a buyer in Dubai. By all current accounts, however, only one running Mantide was ever built. The full size clay model sold for 29,000 Euro at auction last year as part of a sale of remaining Stile Bertone artifacts. Castriota left Bertone in June 2010 to join a post-GM Saab; he’s currently Global Brand Director for Battery Electric Vehicles at Ford and is the chief designer of the upcoming Mustang Mach E.

The owner, car collector Dan Watkins, took delivery of the Mantide and immediately drove it cross-country to the 2009 Pebble Beach Concours d’Elegance – along with a McLaren F1, Ferrari 612 Scagliettii, Ferrari Scuderia Spider 16M, and a two-car hauler RV. The Mantide appeared on the concept car lawn just outside of the Pebble Beach lawn, just days after a cross country road trip. After arriving back on the East Coast it was painted white at Autosport Designs, a Long Island specialty dealer and restoration shop. The Mantide returned to Monterey in 2010 to appear at The Quail: A Motorsports Gathering. There are now 10,000 miles on the odometer, impressive for what is essentially a one-off show car, especially when all too many production supercars show up at auctions with far fewer miles.

And now, the Mantide is for sale. It’s listed on the Autosport Designs website as of this writing, and will head to the Worldwide Auctioneers Scottsdale Auction later this month. It’s all the more interesting given the Castriota’s short tenure at Bertone, and the chaos that must have been happening behind the scenes. The Corvette underpinnings might have made the Mantide a tough sell for the astronomical price 10 years ago, but today it means you can own a one-off prototype that looks like nothing else on the road and still drive it.