Long before the OPEC gas crisis of the 1970s, Americans who owned cars in the 1940s were limited to the amount of gasoline they could buy due to the consequences of World War II. Starting in early 1942, gasoline was deemed a precious commodity and, due to its limited supply, was needed to fuel our planes, tanks, Jeeps, and boats for the war effort.

Still, Americans needed fuel for their cars in order to get to work, so a system was developed and implemented to regulate the purchase of gasoline. Car owners were issued a Gasoline Ration Card—like the one shown here—that had One Unit tabs on the bottom that were punched when used. Along with the card, a windshield sticker with a specific letter was issued. The most popular was an “A” card/sticker that allowed the car owner to purchase about 4 gallons of gas each week. If you were employed in a factory that supported the war effort, you were issued a “B” card, while doctors, nurses, farm and construction workers, and mail employees were issued a “C” card, each of which allowed them to buy up to 8 gallons of gas per week. There were other specific cards, too, such as an “X” card for members of Congress, “E” for emergency vehicles, “R” for non-highway farm vehicles, and “T” for truckers.

I recently found this A-rated Gasoline Ration Card—No. 3156410—at an antique store in Sturbridge, Massachusetts, hidden among old gas station-issued maps. For a mere $1.50, I just couldn’t pass up this little bit of American history. Although it doesn’t state the year of the car (but does list the registration number), it shows that the owner had a Chevrolet sedan. Instructions were listed on the back of the card, as shown here. 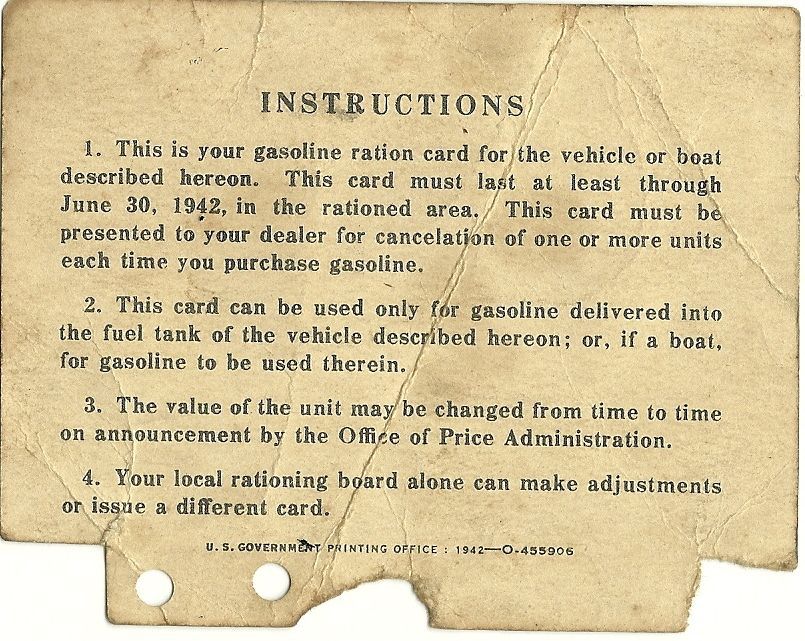