Building an engine is the pinnacle of automotive wrenching. Nothing else is so essential to the soul of a car. It’s a straightforward, yet intricate, puzzle. Putting an engine together correctly is more satisfying than solving the biggest jigsaw or completing most intricate Lego kit. So, what if an engine build was reduced to a low-stakes, toy puzzle-like experience? That’s the proposition of the 1:3 scale Franzis Ford Mustang 289 K-code V-8 kit. It’s still pretty fun if, like me, you really, really like putting stuff together.

Full disclosure: Franzis sent us a free kit to build ourselves. If you want one, it’s available for $185.95 at Amazon and Makerhaus. Franzis also makes a couple of Porsche Boxer kits and a BMW R90 motorcycle engine kit, among others, if that’s more your style. There are also cheaper model kits out there. The Franzis engine is not just any V-8, mind you, but the hi-po K-code 289. The kit is officially licensed by Ford and comes with an extensive, 60-page history of the Mustang in the front half of the instruction manual. The completed engine turns via a battery-powered motor inside the alternator housing, accompanied by engine noises, with lights at the end of each spark plug that flick on for each firing cycle.

So how did it go? Read on for our full build thread. My total time was around two and a half to three hours. 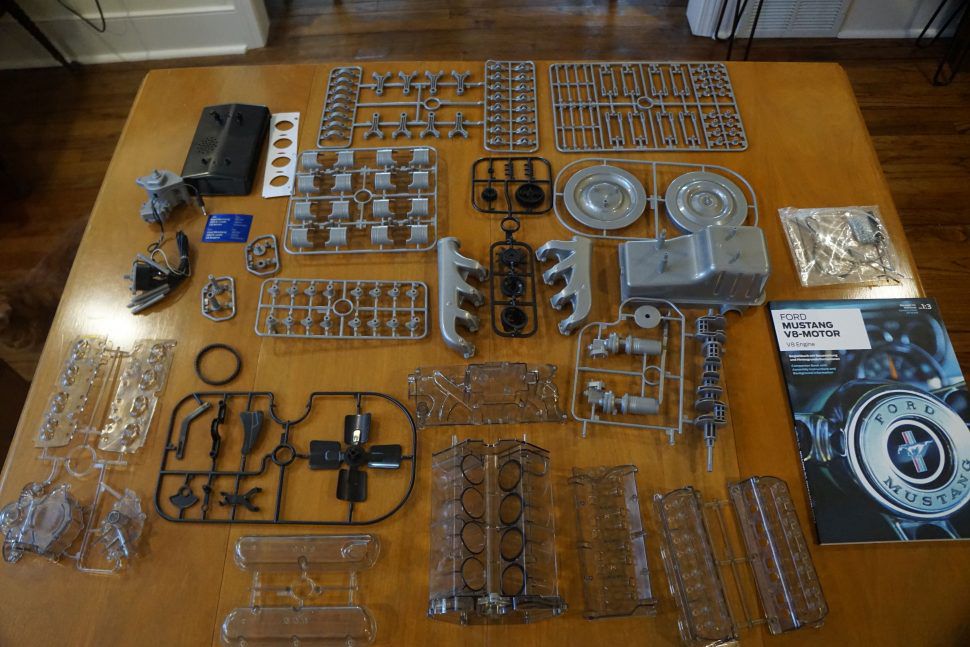 Yes, this is a lot of stuff. It’s labeled as a 200-part kit, but I didn’t count. I did resist the urge to pop out all the parts before starting. That turned out to be a smart move, because it makes it easier to keep all the parts straight. The instruction manual has an illustrated reference guide to each piece of plastic, just in case you get confused.

The first step is to assemble the pistons, which are split in two halves. You place a wrist pin inside a piston half, slide the connecting rod over the pin, and snap the other half of the piston on. Then, you attach four of the piston and connecting rod assemblies to the crankshaft and screw on the bearing caps. Drop the other four pistons into the engine block, snap the crankshaft into place, and fasten the other four pistons and connecting rods to the crankshaft. The piston are one of the items where it’s a good idea to shave off any plastic nubs that remain when you remove the pieces from the sprue, to prevent any clearance issues. On a related note, there will be a lot of tiny bits of plastic debris in your workspace. 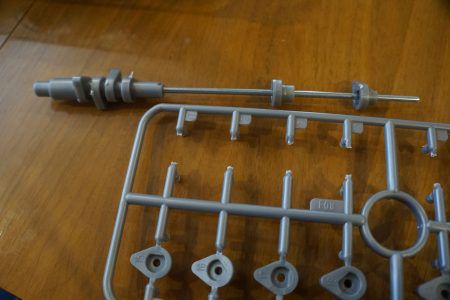 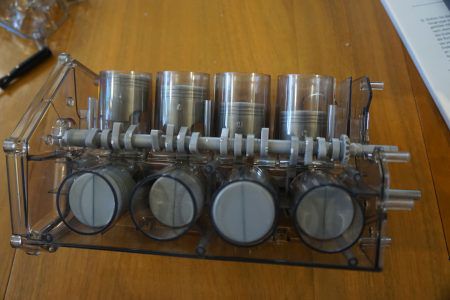 The camshaft is another component where I risked bloodshed by shaving off plastic nibs, fortunately escaping without injury. Each lobe is a single piece of plastic, with a flat edge to index correctly relative to the other pieces. All the parts in the kit are numbered, which makes the instructions, and the assembly process, clearer. 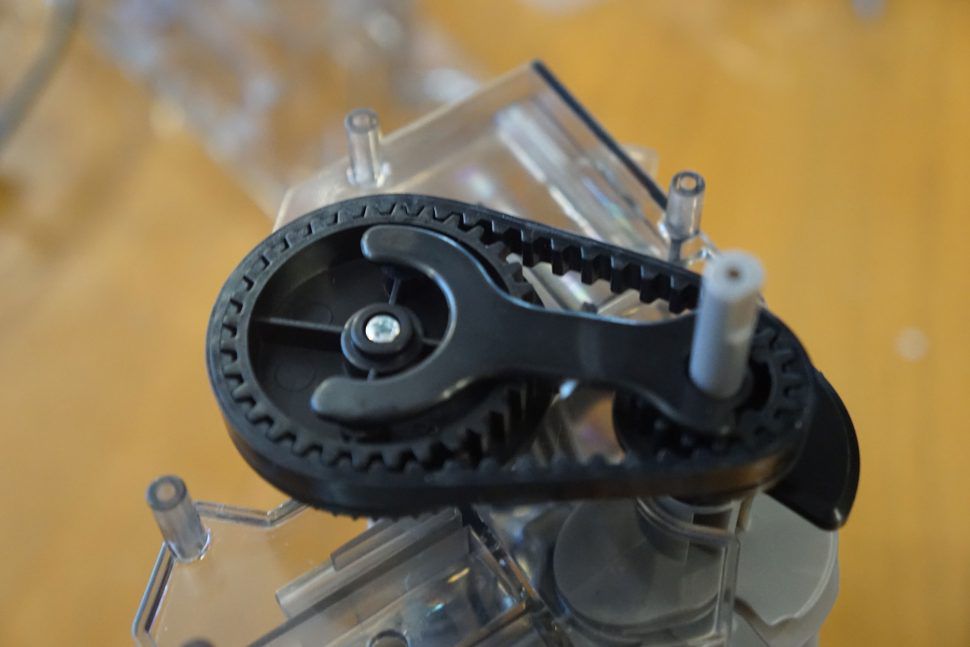 Add a counterweight, cam and crank gears, and a timing belt. Then, just like a real engine, you have to fix the gears in place to make sure you don’t mess up the distributor timing later on. After this, the alternator goes on – it hides the motor that turns the model engine, which connects to teeth on the backside of the camshaft gear. 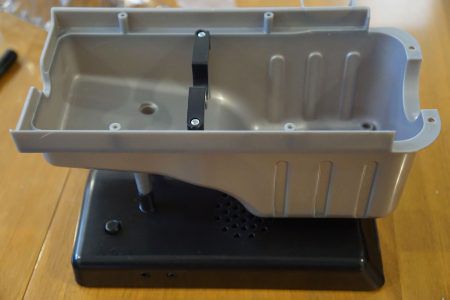 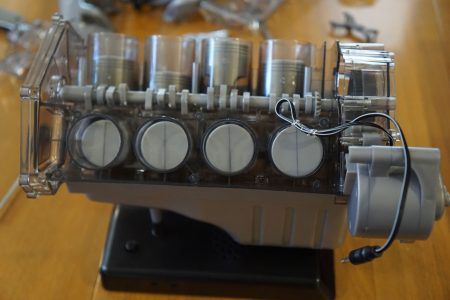 Batteries go in the engine stand, oil pan and crankshaft support go on the stand, and then the block goes onto the oil pan. The included screwdriver, used for assembly, is magnetic, which is handy considering how small and easy to drop the screws are. I didn’t lose any, but in case you do the kit comes stocked with extras.

With the block finished, it’s time to assemble the heads. This is the most intricate step, much like in real life. Unlike real life, the kit uses two-piece valves, so you slide the stem through the head and pop the bottom of the valve on once it’s through (although I suppose you could push a fully-assembled valve though the bottom of the head). The valve springs here are similar to what you’ll find on a retractable ball point pen. I had to be extra careful to get the intake and exhaust valves in the right place, although it looks like the kit would still work if you got them backwards. The rocker arms snap into place.

Drop in the pushrods, toss on the head gasket, and install the heads. Resist the temptation to turn the engine and watch the valves work. These steps involve a lot of those tiny screws. 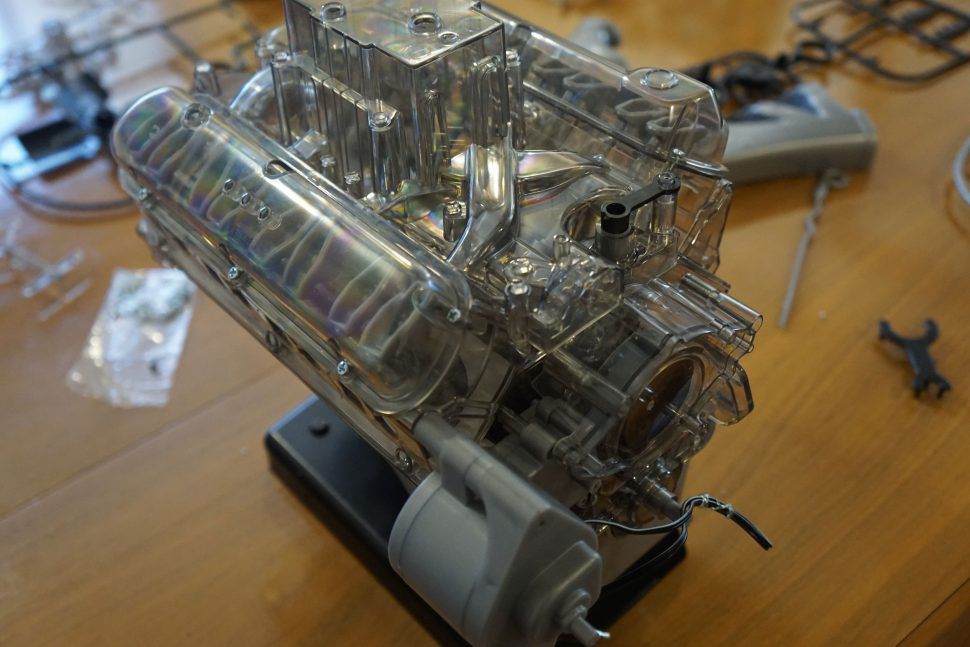 With the intake manifold in place, the engine looks almost complete. One simplification here is the lack of a model carburetor and throttle body. Which is probably a blessing. 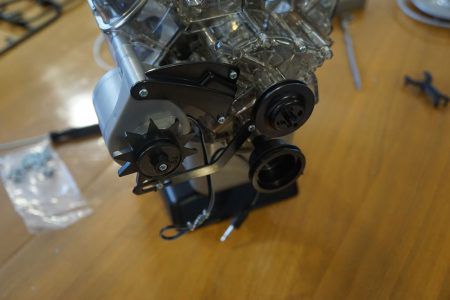 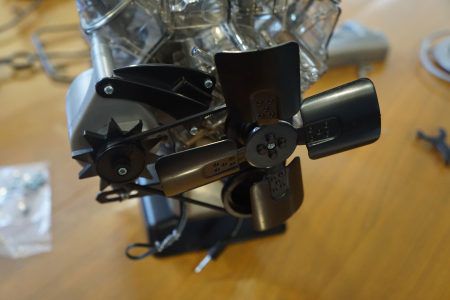 Pulleys, alternator bracket, accessory belt, and fan go on next. 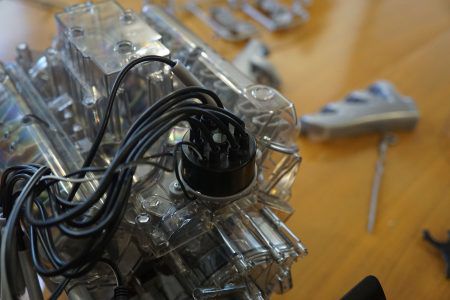 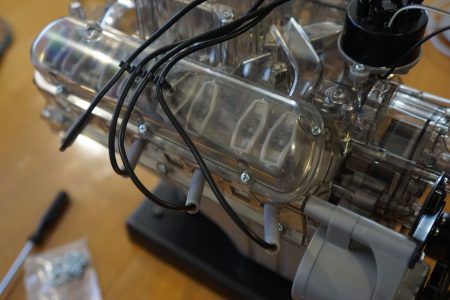 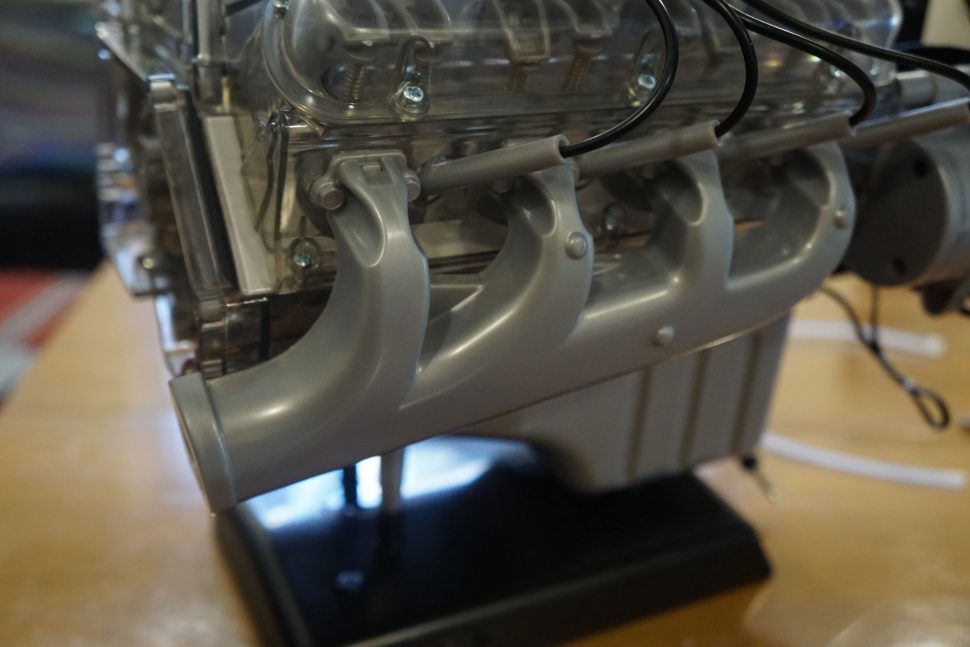 In what is perhaps anticipation that builders will get sick of all the tiny screws at this point, the exhaust headers, fuel pump, and air cleaner all snap into place. Add the dipstick, and the job is done. 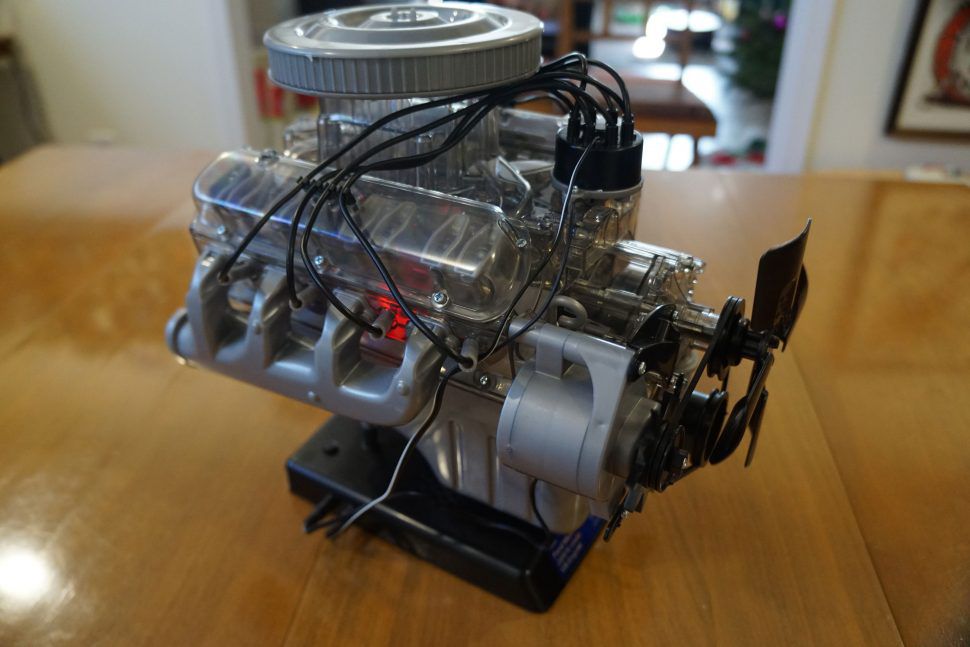 Success. I feel at least one third as accomplished as I would with a full-size engine. Notice the red light where the cylinder is firing. The interesting thing about this kit is that the fundamentals are all correct, so it’s also a good way to teach someone how an engine works. The recommended age for the kit is 14 and up, but younger hands can probably get the job done with adult supervision.