All photos by Jim Donnelly

If it wasn’t for the universe of automobiles, the buzzing Gold Coast city of Daytona Beach, Florida, would not exist in the form we all know so well. From the earliest days of the 20th century, auto pioneers including Henry Ford, the Stanley brothers, and Alexander Winton brought their creations just up the coast to Ormond Beach, with its hard-packed sands that were ideal for maximum-speed runs. When the cars began going seriously fast, needing more room to stop, the action shifted south to Daytona, which had longer beaches. Once the old stock car course — consisting of the beach, state route A1A, and two U-turns — became increasingly inadequate, Big Bill France defied sanity and erected his gigantic palace of motorsports a few miles inland.

Today, “The House that France Built” towers majestically over ordinary car folks and their rides every Thanksgiving weekend. The Turkey Run, as its now called, marked its 46th edition this November. Running over four days that include Thanksgiving itself, the Turkey Run can rightly claim its place among Hershey and AutoFair at Charlotte Motor Speedway as one of the old-car world’s biggest happenings. Typically, the Turkey Run will attract more than 6,000 classic cars, old race cars, hot rods, rat rods, and (this being Daytona, the home of fabled Bike Week) motorcycles. The vendors’ area and swap meet markets everything from deep-fried goodies to complete cars to riding leathers, the latter another consequence of the motorcycle thing that envelops Daytona so deeply. 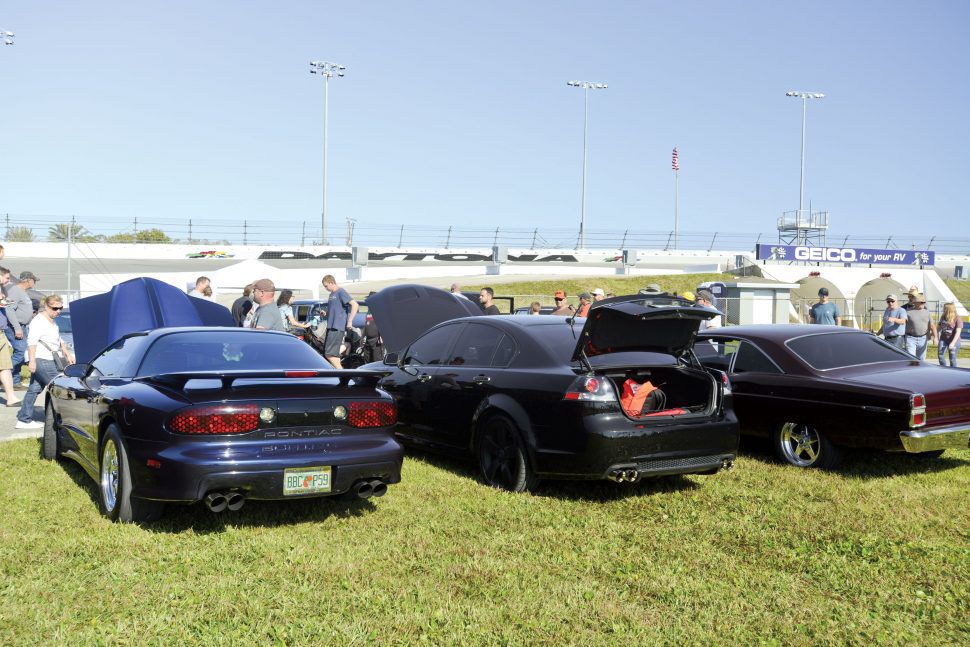 This year’s edition of the Turkey Run featured fabulous weather, with temperatures in the 70s and a determinedly full house, even with Black Friday shopping going full tilt right across International Speedway Boulevard. Diversions included a craft beer festival that attracted 48 breweries, appearances by Rick and Kelly Dale of the History Channel’s American Restoration, and visits throughout the show by Butch Patrick, who played Eddie Munster on the unforgettably macabre 1960s sitcom. The George Barris-built Munster Koach and Drag-U-La cars from the program were also in attendance. We, however, focused our attention on the sprawling car show, the only way to appreciate the sheer volume and variety of what shows up at the Turkey Run. 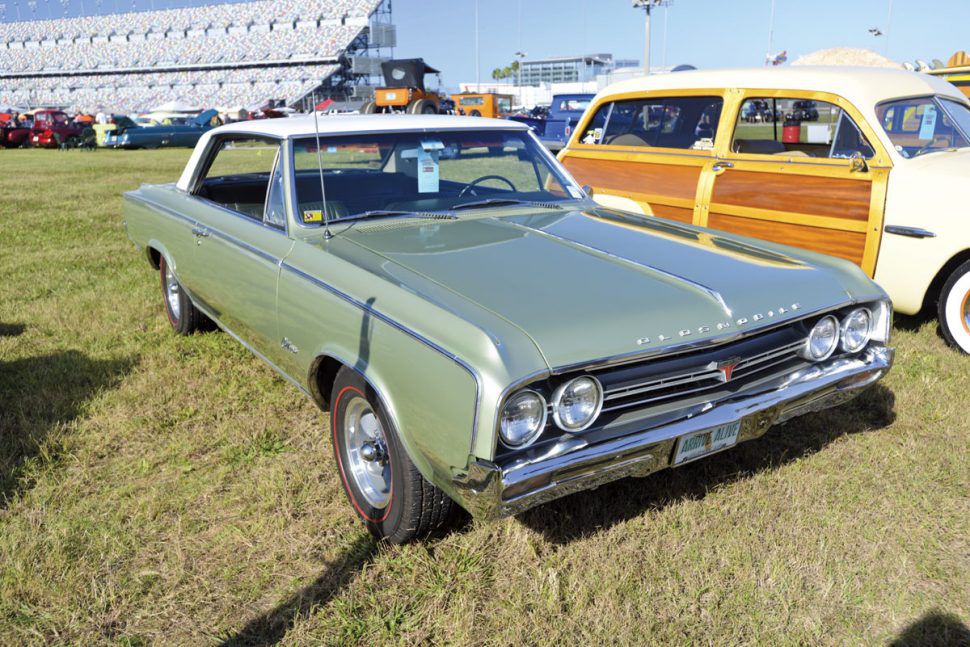 How often do you see one of these, especially decked out with handsome Torq Thrust wheels? This 1964 Oldsmobile F-85 Cutlass hardtop was presented by Rich and Linda Martin of Fort Lauderdale, Florida. 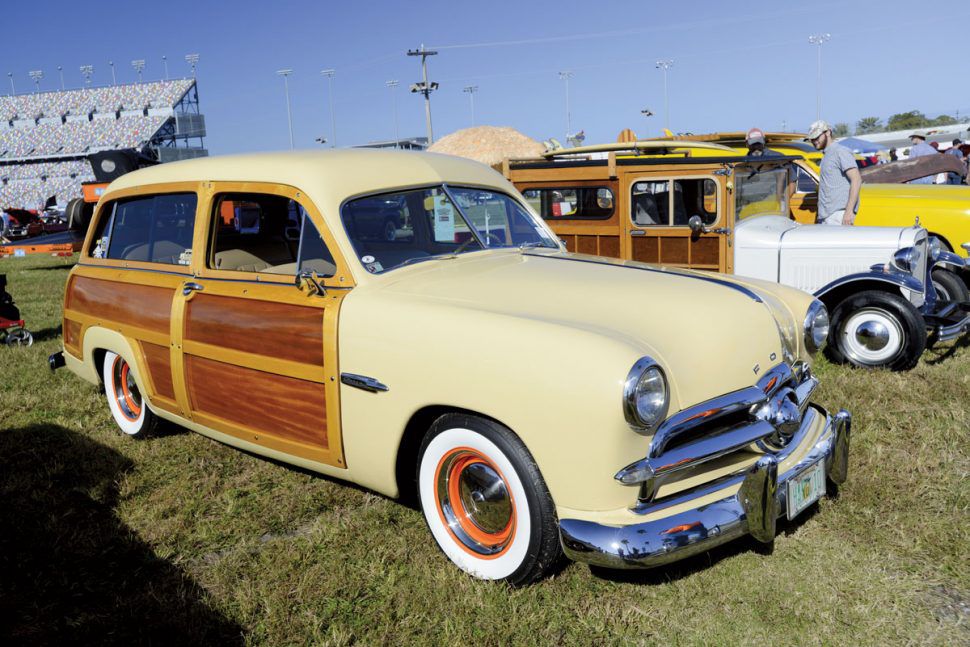 Woodies got their own dedicated show field at the Turkey Run. This 1949 Ford two-door station wagon—the block letters on the hood and single grille spinner are the giveaways—was also shown by the Martins, and its Florida license plate appropriately read “HANG 10.” 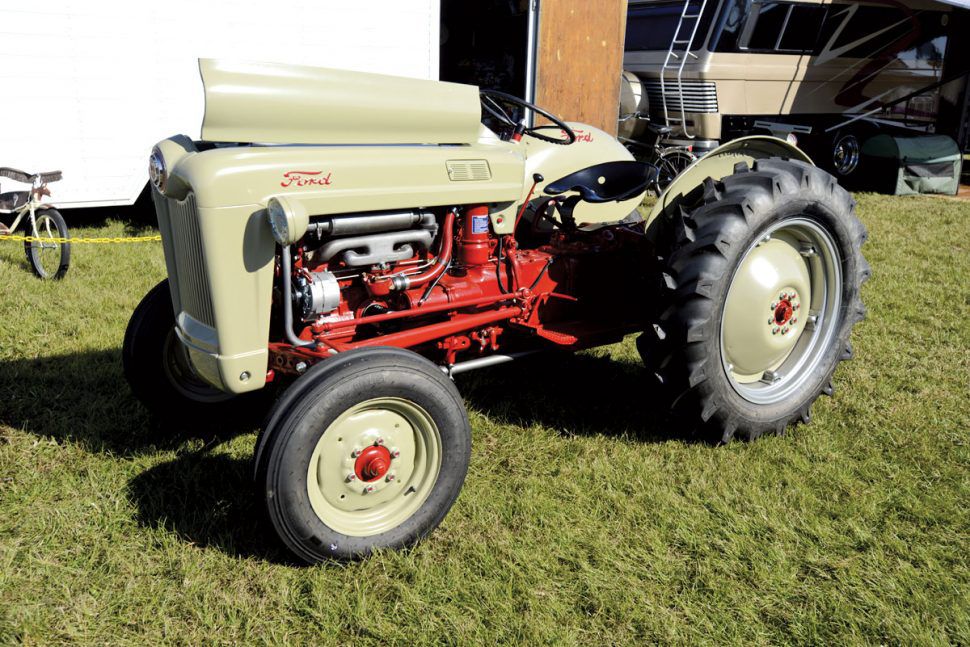 The Ford Motor Company may have liberated farmers from the land via the Model T, but the firm still kept its hand in when it came to working the soil. This Ford NAA Golden Jubilee just one of several lovely postwar Ford tractors that were being shown. 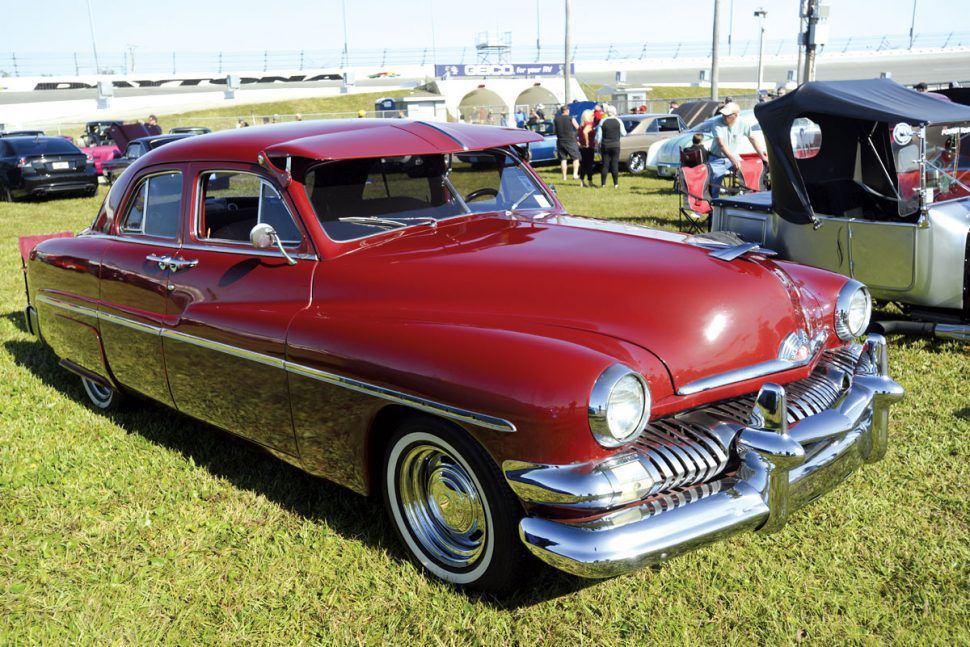 No car show is complete without a 1951 Mercury, the greatest of the brand’s first true postwar cars. The owner of this Sport Sedan didn’t advertise his or her name, but we liked the chop-free bodywork with its (necessary) sun visor. 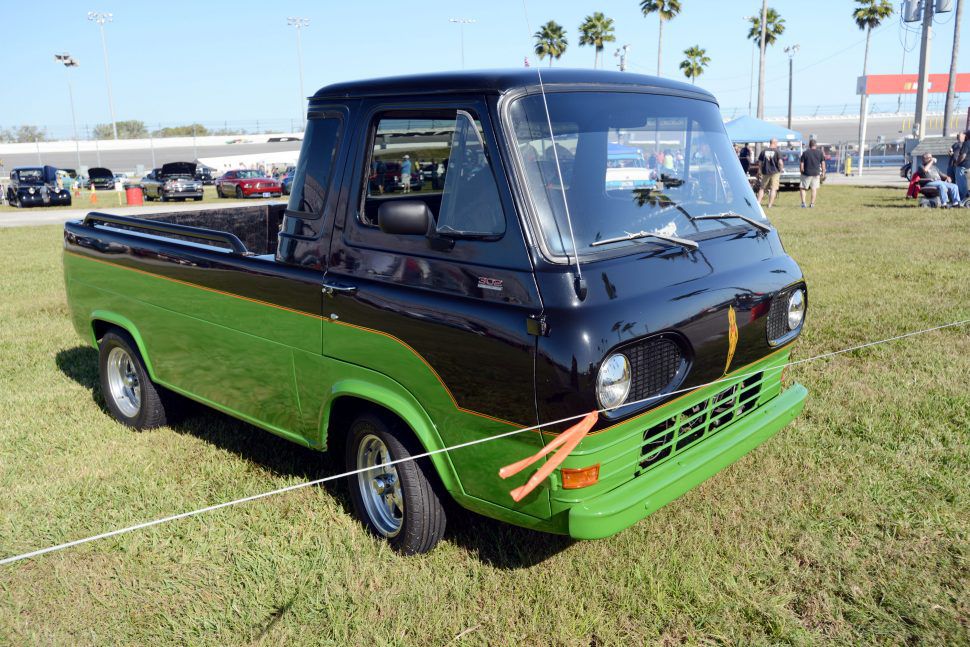 Palm trees framed this tasty treat from George Berg of DeLand, Florida. It’s a 1967 Ford Econoline pickup retrofitted with a 302 small-block and C4 automatic, pinstriped, given the big ’n little treatment and finished in black and a shocking fluorescent green. 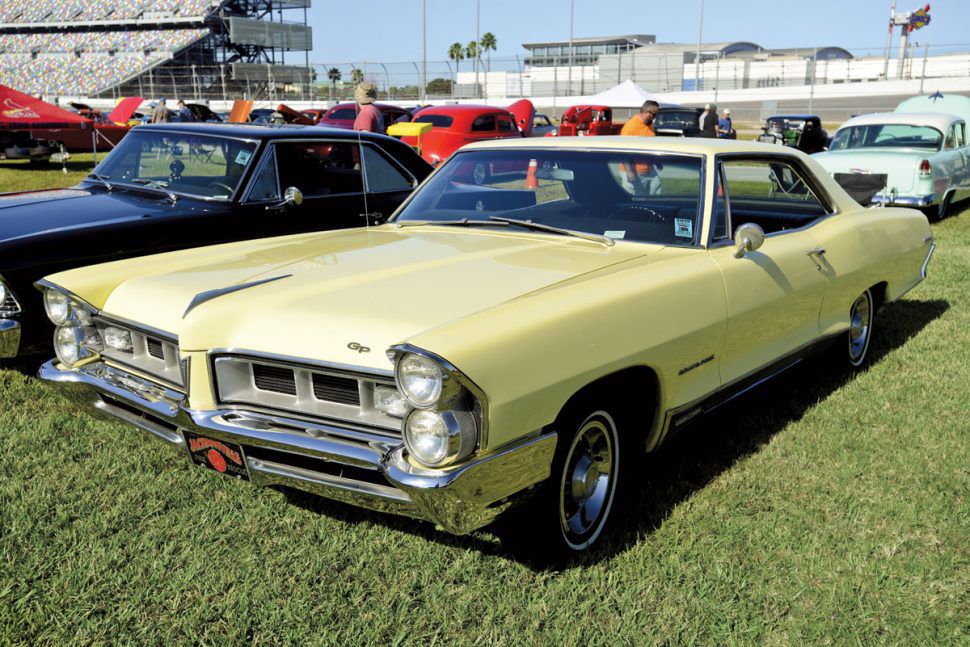 The owner’s name wasn’t available, but there was no way we were passing this up. Pontiac adopted Coke-bottle styling and a new box frame with perimeter rails in creating the 1965 Grand Prix, this soft yellow case study looking admirable with its fresh eight-lug wheels. 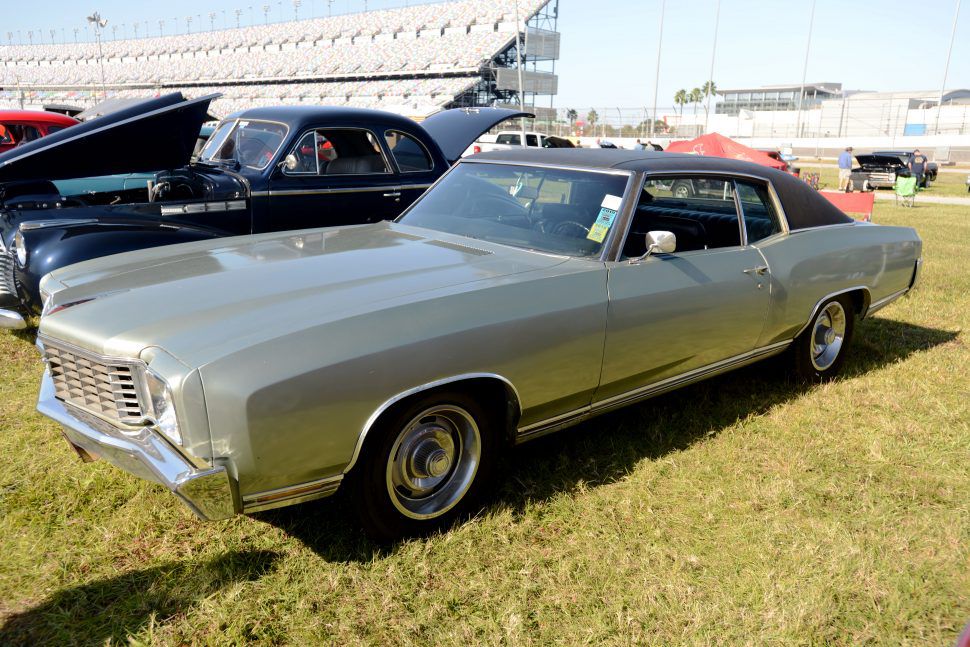 The absence of engine callouts indicates that this 1972 Chevrolet Monte Carlo, with its column-shifted Turbo Hydra-Matic, is likely powered by a 350. Everything about this personal luxury coupe, from paint to upholstery, spoke to full originality. 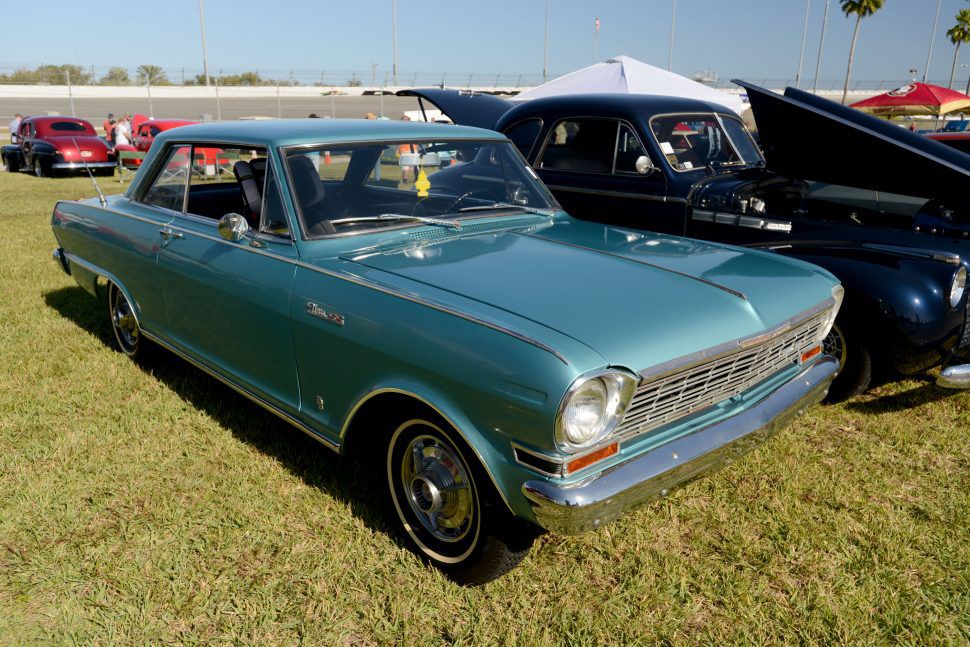 We glommed right onto this 1964 Chevrolet Nova SS, with a basic OHV straight-six and a Powerglide making up its drivetrain, and likewise looking to be an original car. The owner was asking $11,000 for it. 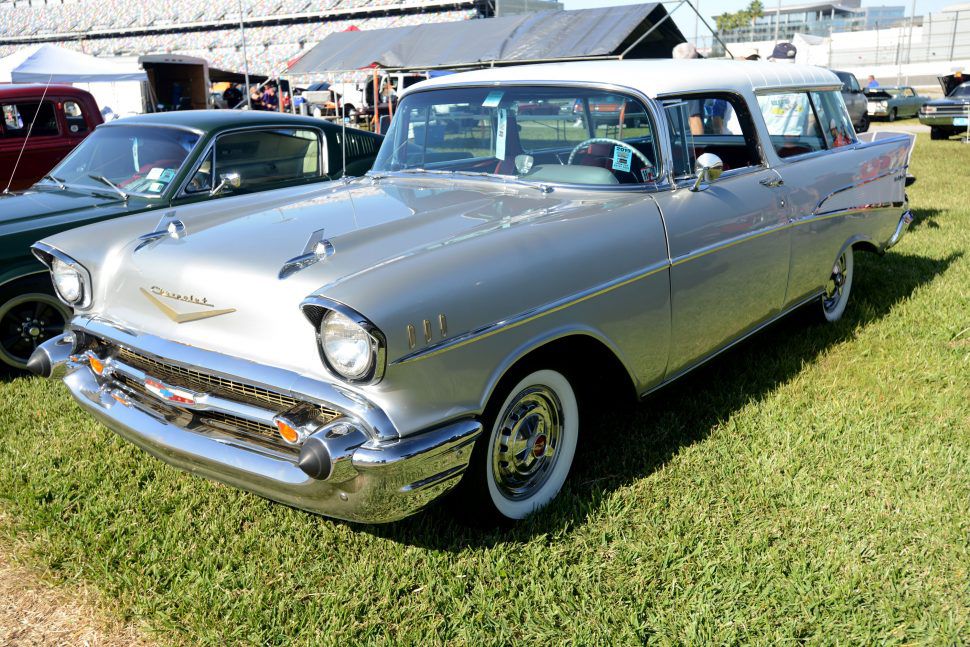 Does any car bespeak the ’50s as forcefully as a 1957 Chevrolet, especially a Nomad like this one? It’s in the collection of Scott and Loretta Mabus, who brought it all the way from Milton, Pennsylvania. 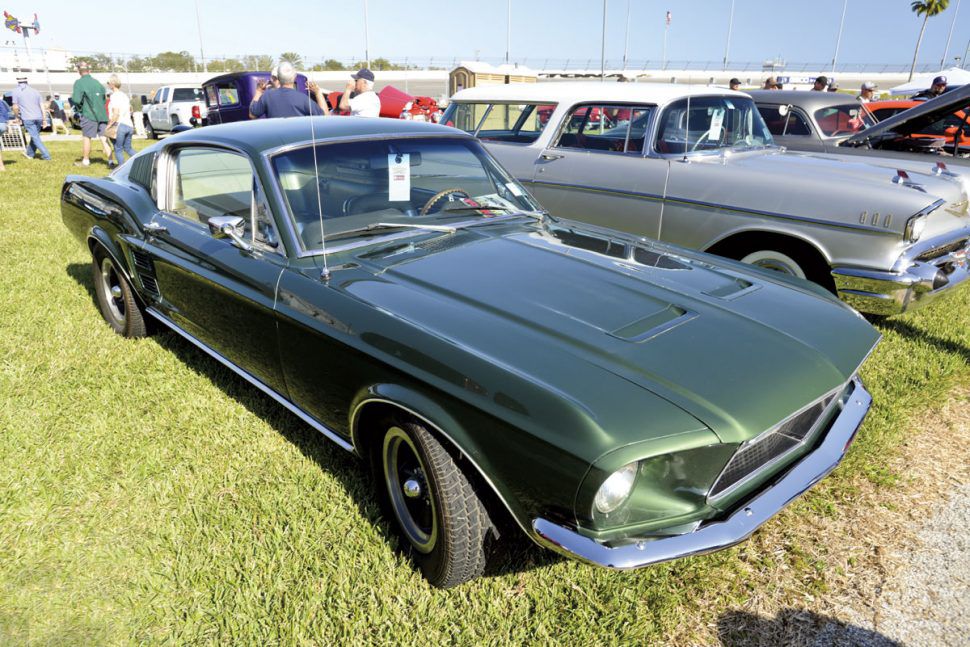 Look closely, and you’ll spot an issue of Hemmings Muscle Machines on the dash top of this 1968 Ford Mustang, its cover story on a re-creation of the fabled car from Bullitt. We don’t know whether the Mustang was a 390 like the movie cars, but the four-speed manual, Highland Green finish, and Torq Thrusts all contributed heavily to the right look. Randy Lawton of Bloomsburg, Pennsylvania, showed it. 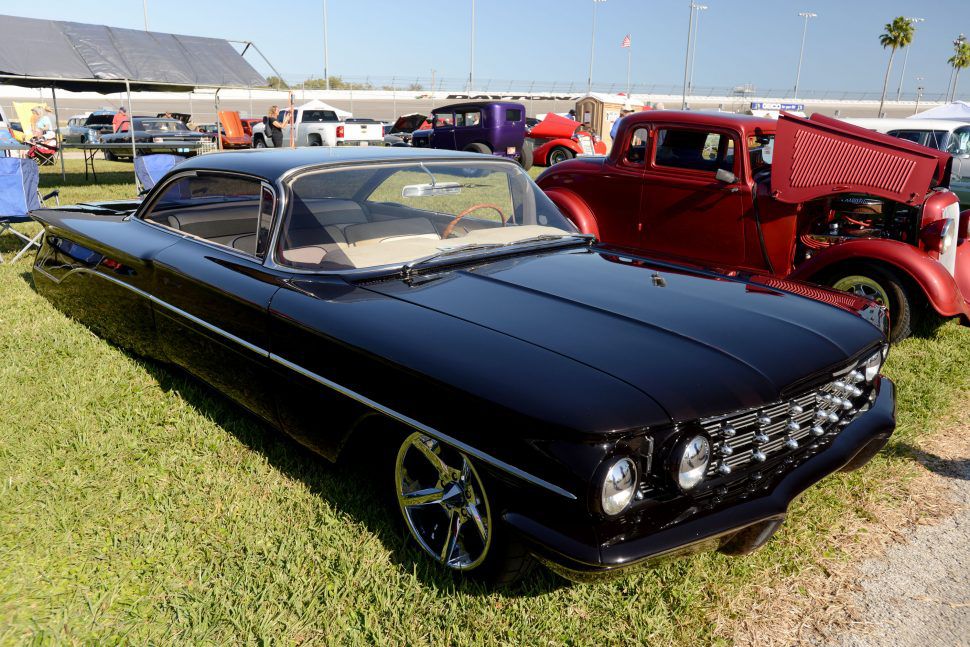 The owner identified himself only as J. Wood, and didn’t list his hometown, but we loved his handiwork. It’s a 1960 Oldsmobile Dynamic 88 with a moderate custom treatment. You can’t really see it here due to the sun’s brightness, but the car is finished in root beer fade job. Note also that, despite its rocker-scraping stance, the bodywork is uncut. 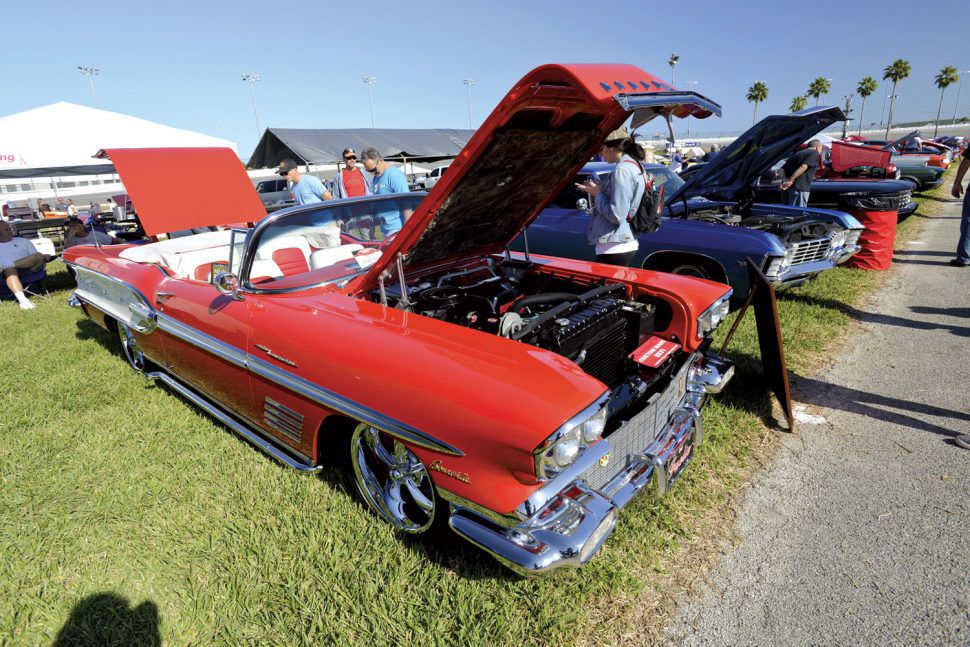 If there was a Best Engineered award at the Turkey Run, this piece would have grabbed it. It’s a 1958 Pontiac Bonneville convertible and, yes, it has fuel injection. Only the engine’s fed by a custom electronic sequential fuel-injection setup with stock looks. The factory Rochester fuel-injection unit was in the trunk. With a .030 overbored 370 V-8, the Bonneville was billed as one of 18 convertibles built in 1958 with quad bucket seats and Rochester fuel injection. It belongs to Larry Jones of Kentucky. 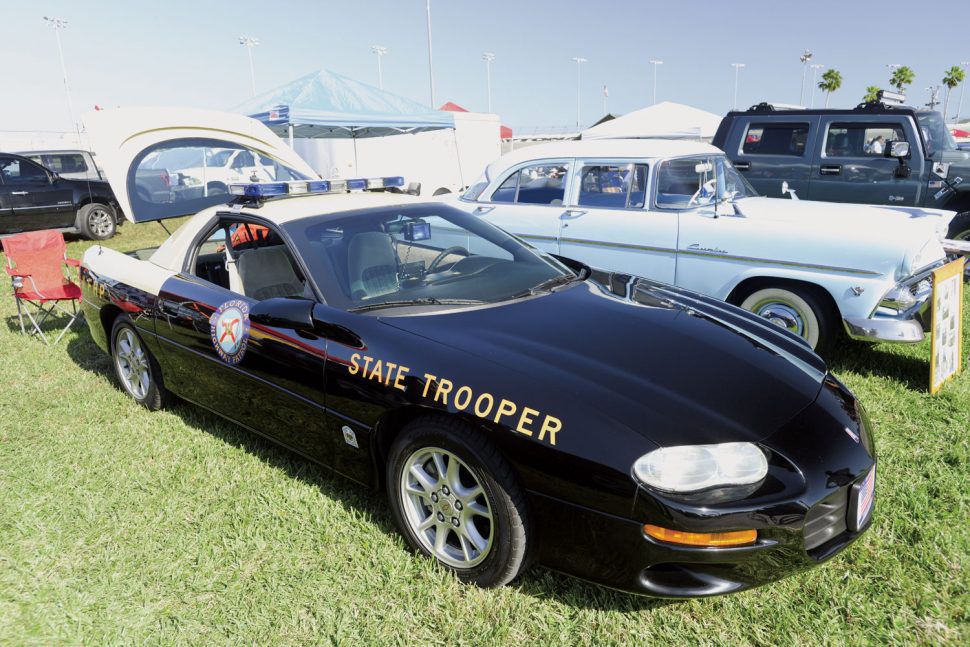 Denny Powell of Jacksonville still serves as a Florida state trooper. His 2002 Chevrolet Camaro is one of a fleet once operated by the Florida Highway Patrol for pursuit duty. 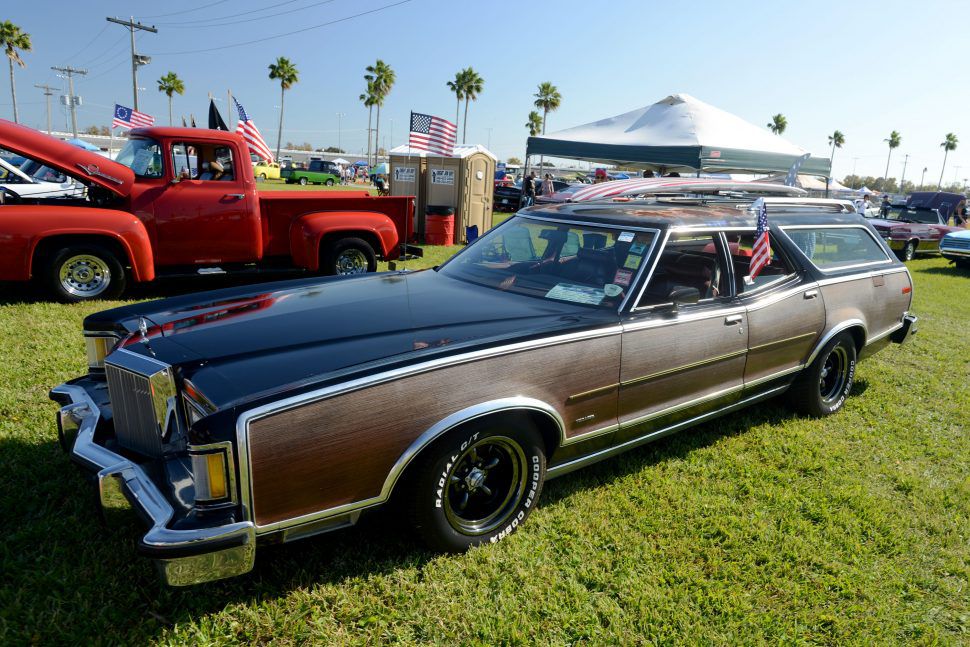 We spoke to Ed Schultz of Palm Beach Gardens, Florida, about this highly unusual offering. In 1977, the Mercury Cougar was a midsize car that was also offered as a station wagon. This nine-passenger Cougar Villager station wagon is one of only 4,700 produced, a one-year-only model, and, aside from the wheels, tires, and a retrofitted Ford 400, it’s all original. 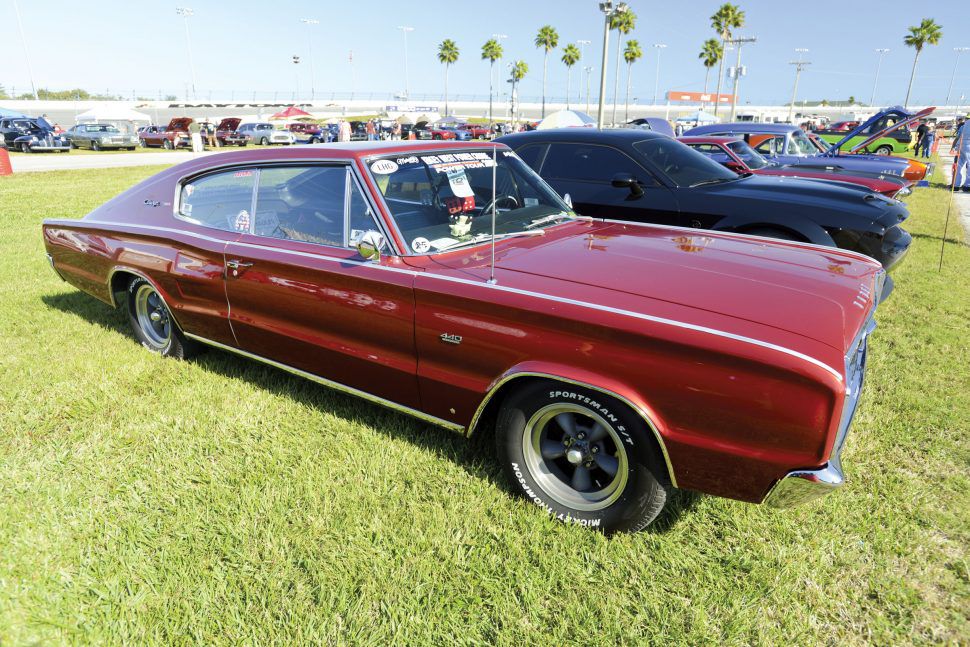 In 1966, the new Dodge Charger came standard with a 383 Wedge V-8 for power, but Luc Vian of West Palm Beach, Florida, upgraded his clean example with a 440 and a modern four-speed-overdrive automatic transmission. Do Torq Thrusts help a car’s looks bigly, or what? 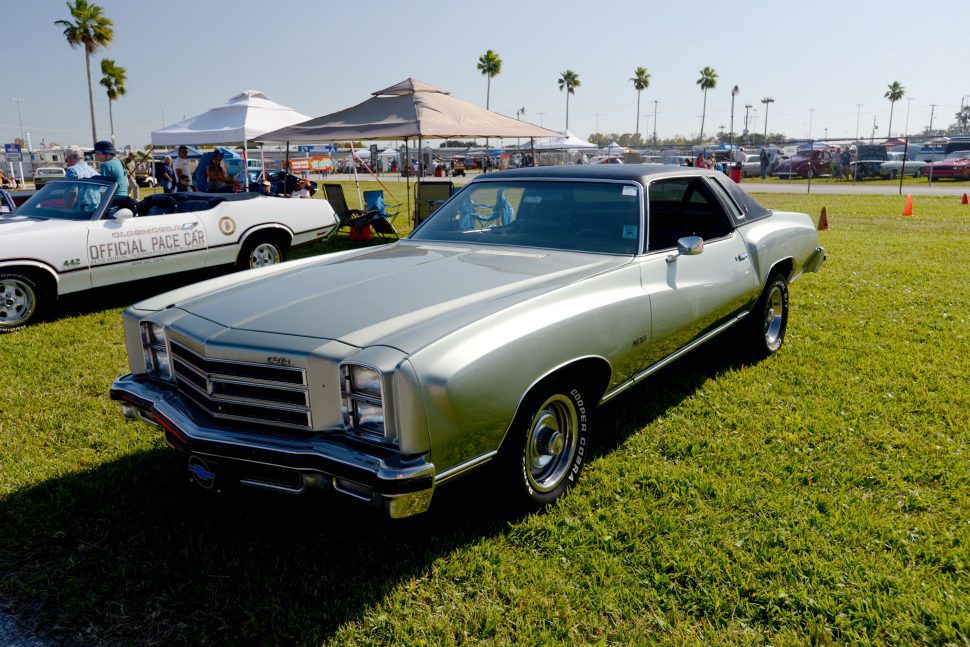 Another original Chevrolet Monte Carlo, this 1976 model boasts the rectangular stacked headlamps that were new that year for the second-generation cars, more than 353,000 of which were built in base S (like this one) and deluxe Landau versions. Again, Florida is kind to original cars. 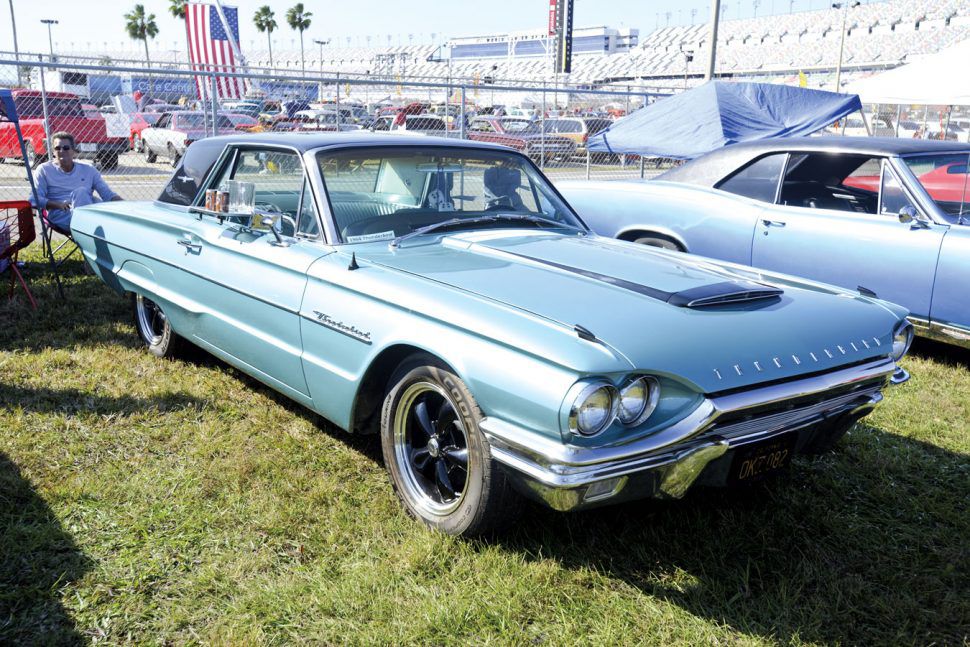 It looks mostly stock, but Rodney and Katherine Witt of New Smyrna Beach, Florida, have made some significant changes to their 1964 Ford Thunderbird. It retains its original 390 V-8, but has had its chassis upgraded with aftermarket front coilovers. 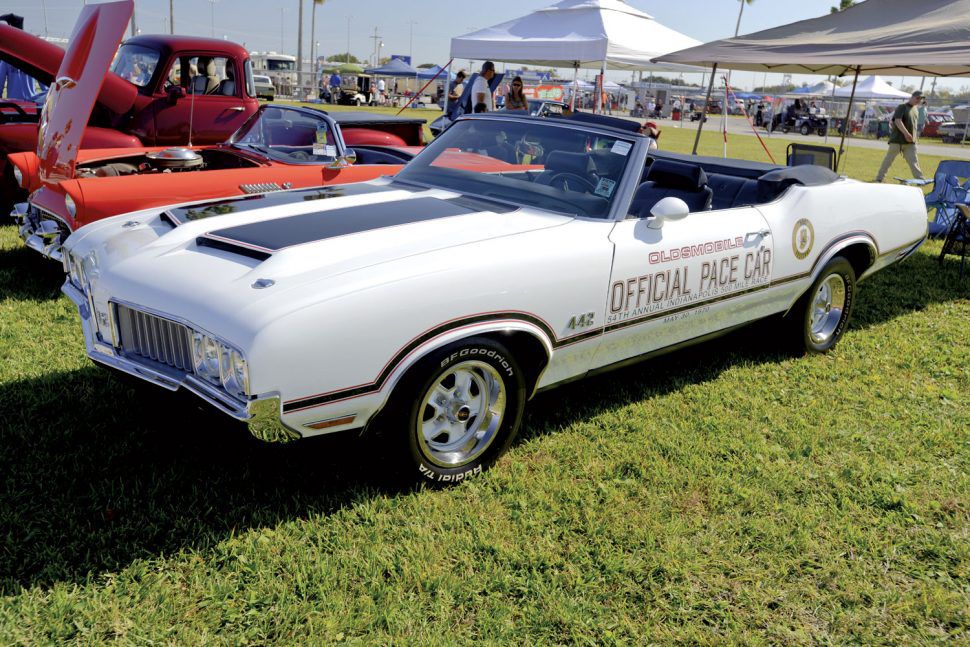 Out of Pennsylvania, this 1970 Oldsmobile 4-4-2 convertible replicates one of the cars that Oldsmobile supplied to the Indianapolis Motor Speedway that year, one of which paced the starting field that sent Al Unser to the first of two straight Indy 500 victories. 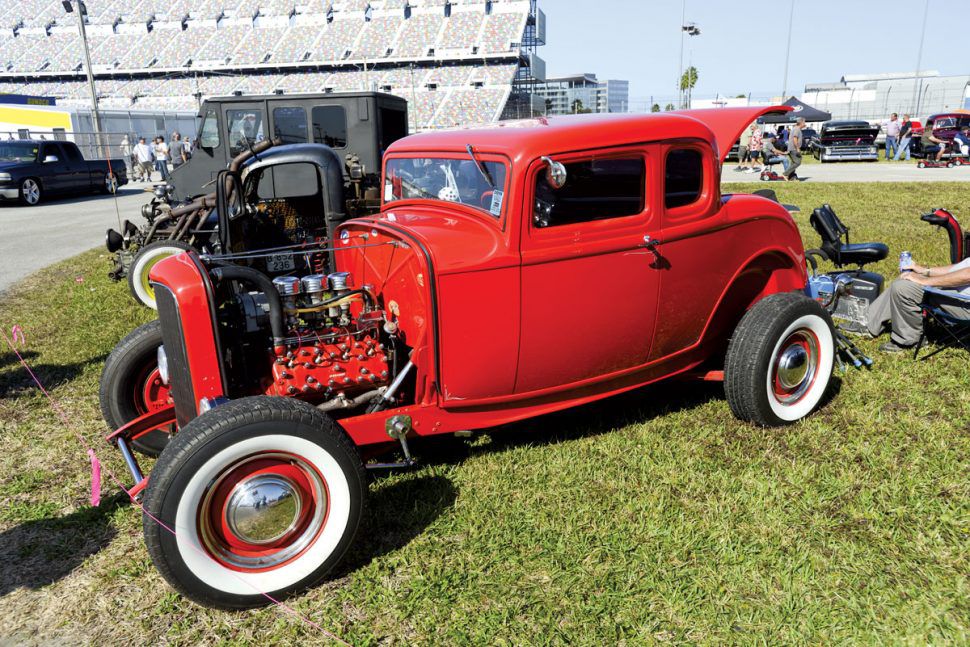 We loved this one. In the perfect color scheme, this 1932 Ford five-window coupe has a 1953 Mercury flathead V-8 displacing 255-cu.in., a trio of Holley 94 carburetors, a 1939 Ford transmission, and 1940 Ford rear. Gary Raber of West Palm Beach, Florida, tools around in it. 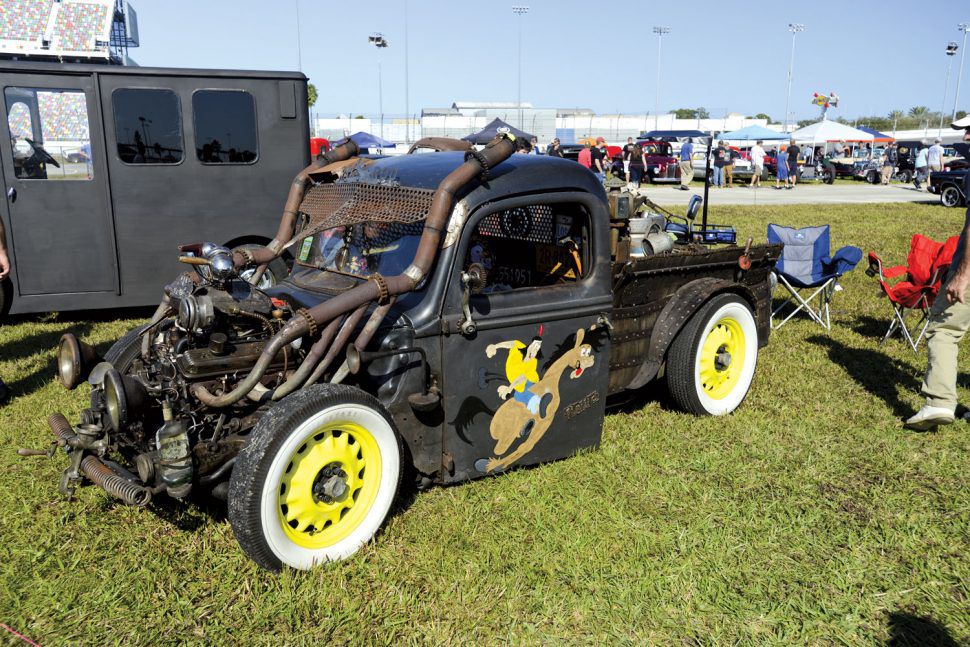 This, folks, is a rat rod. Best we can tell you is that it’s got a 1940s cab and a discarded vodka bottle for a coolant-overflow tank. 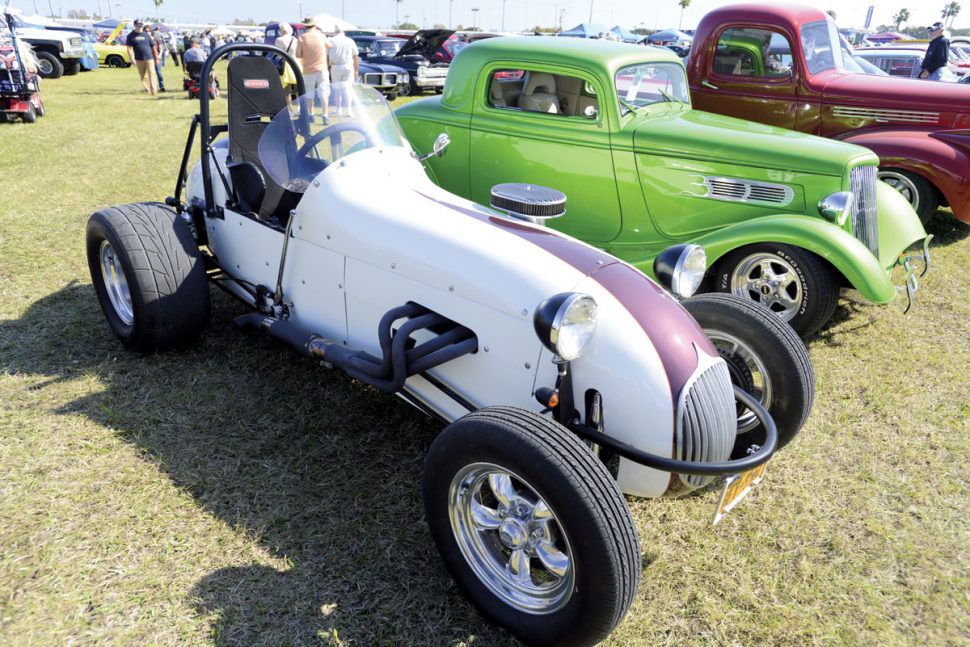 The owner wasn’t with it, but this vehicle looks to be a stretched 1950s Midget racer, the kind that was adapted for Sprint car racing in those years. It has a crossflow engine design of some sort, full safety equipment, including a Kirkey seat and removable steering wheel, and it’s licensed for road use in New York. 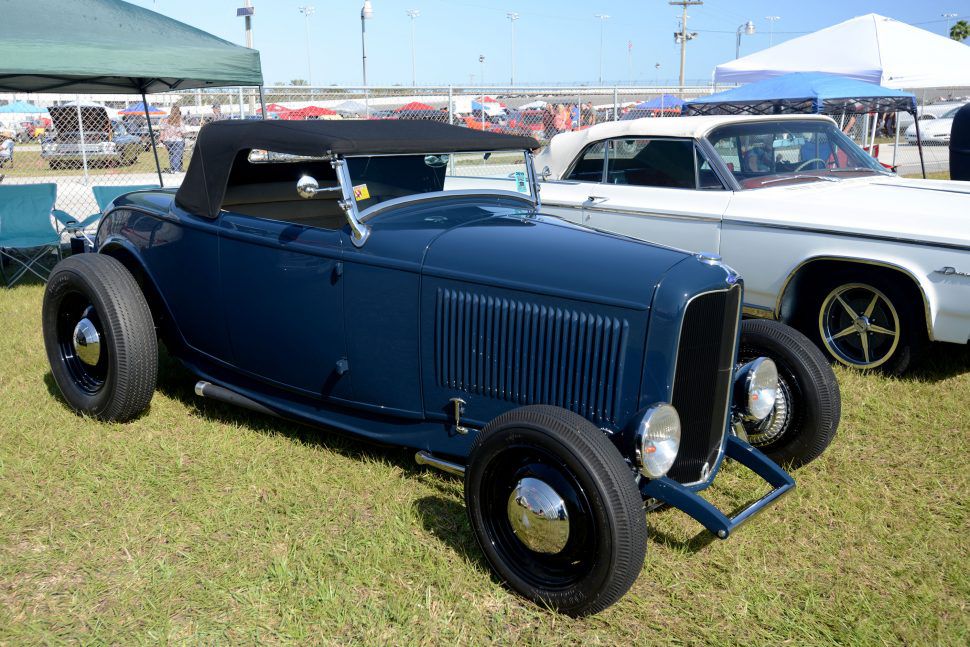 This is everything a street rod ought to be: Steel 1932 Ford roadster body, no fenders, big ’n little steelies, hairpins, and capped exhaust cutouts. 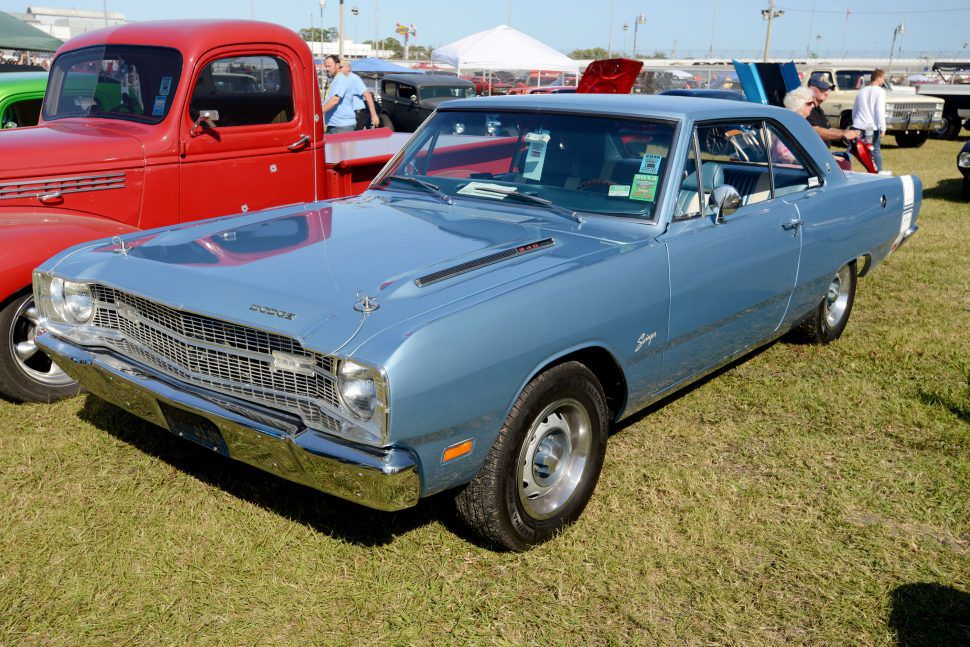 The Dodge Dart Swinger was a youth-oriented spinoff of the fourth-generation Dart; this one dates to 1969 and boasts both a 340 small-block for power and Dodge’s famous bumblebee stripes. The owner is Otto Brito of Orlando, Florida. 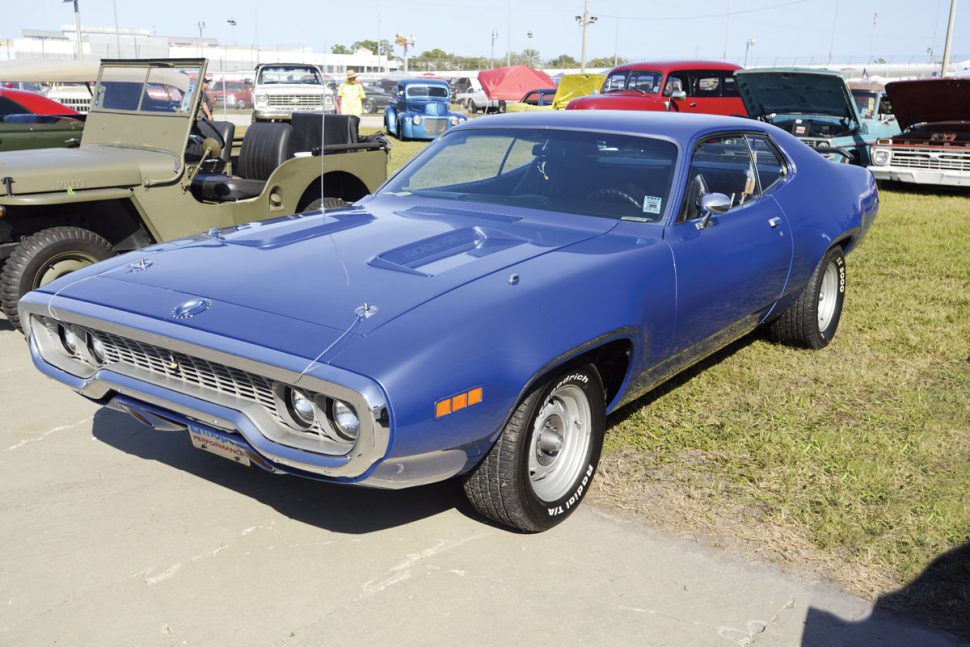 You either liked the fuselage-body Mopar muscle cars of 1971 or you didn’t. We opted to be fascinated by this 1971 Plymouth Road Runner, powered by a 300-hp version of the Wedge V-8. 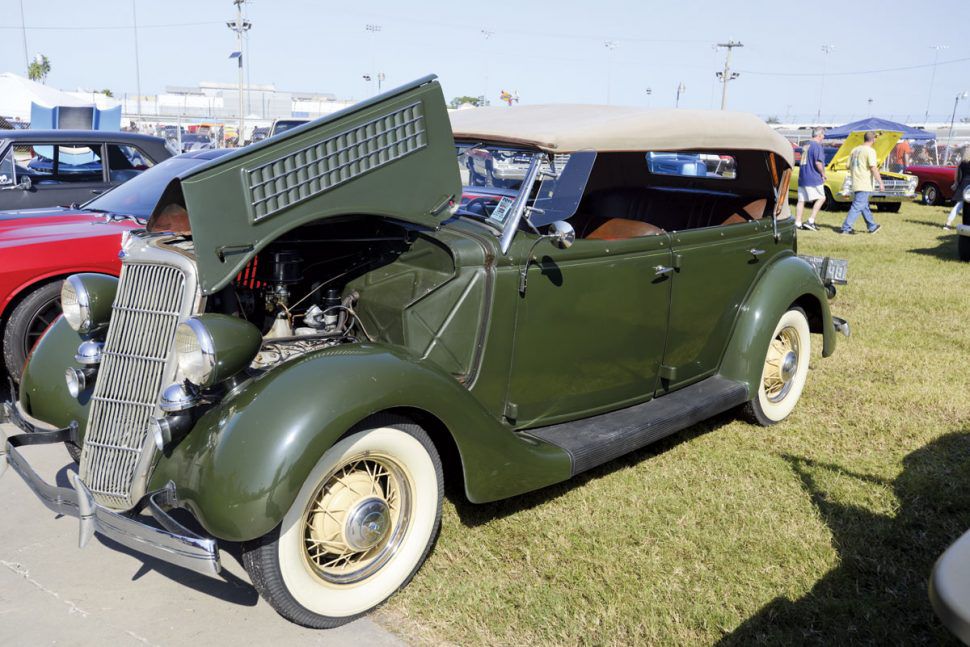 We actually spotted this car cruising the beach on A1A one night during the Turkey Run. Ford produced only a few more than 4,200 examples of the convertible sedan in 1935 against total output that surpassed 820,000 cars. We liked that this was an honest, if older, restoration in correct factory colors, in no way exaggerated or overdone.