Camping via auto – or what the bros call “overlanding” these days – isn’t exactly new. Consider the many housecars built on cheap Model T chassis during the Twenties, or the rise of travel trailers a century ago, or the Joad-style jalopies that carried Dust Bowl migrants to California during the Depression. For as long as cars have been a necessity in our mobile country, people have camped in them for both recreation and necessity, and on occasion the carmakers have expressly made their vehicles suitable for camping.

The company most famous for encouraging their customers to sleep in their cars, Nash, was one of a number of companies that offered seats that folded flat into beds in the Thirties. Early versions of the seats merely provided a flat floor between the trunk and rear seat, but by the late Forties, the company introduced the more well-known version that relied on the front seat to fold back and provide a flat area that would sleep entire small families. Pitching the feature to hunters, fishermen, and other outdoorsmen, Nash even offered an accessory mattress and window screens, as seen in the press photo above. The feature remained a Nash staple well after its merger with Hudson to become American Motors. 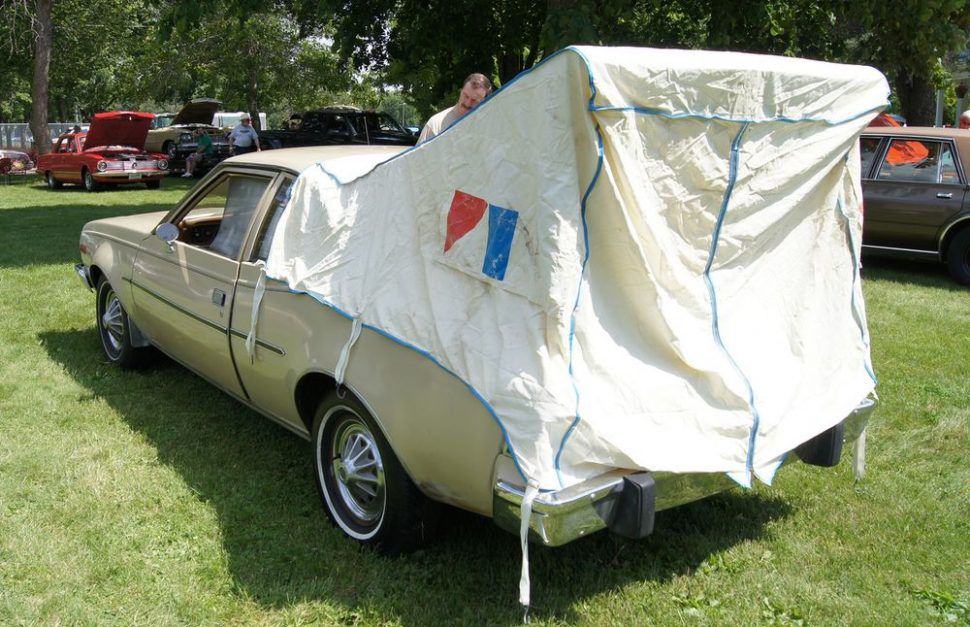 Though not a direct successor to the Nash fold-down seats, AMC continued the tradition with the Hornet Hutch, an accessory tent offered from 1973 through 1980 specifically for the Hornet hatchback with its fold-flat rear seat. AMC also reportedly offered tent packages for the late Fifties Rambler Cross Country station wagon and the Gremlin (as the Penthouse Sleeper), but we’ve yet to confirm the existence of the former or whether the latter was a factory-offered accessory (as opposed to an aftermarket item). Likewise, we’ve yet to confirm reports of a factory-offered tent for Kaiser Travelers. 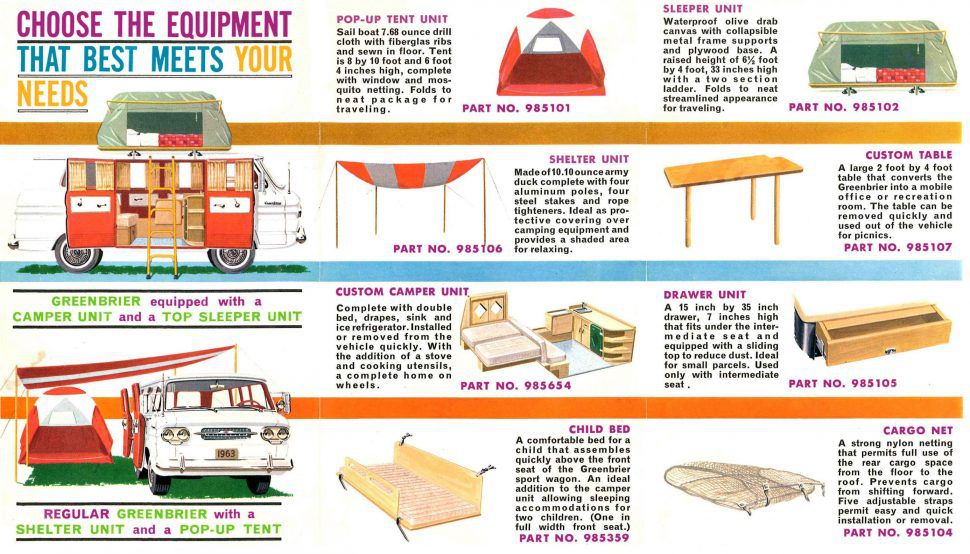 If any carmaker worked harder to get its customers to saw logs in its products than Nash/American Motors, it was GM. Take, for instance, Chevrolet’s suite of camping accessories for the Greenbrier van, ranging from a rooftop-mounted tent to a separate, non-attachable tent that Chevrolet intended to pair with a canvas shade to a “custom camper unit” bed and kitchenette that could be removed from the van. Volkswagen’s similar camper van, which Chevrolet surely had in its sights with the Greenbrier camping accessories, doesn’t get a spot on this list if only because Volkswagen itself didn’t build the campers, rather contracted their construction out to Westfalia. 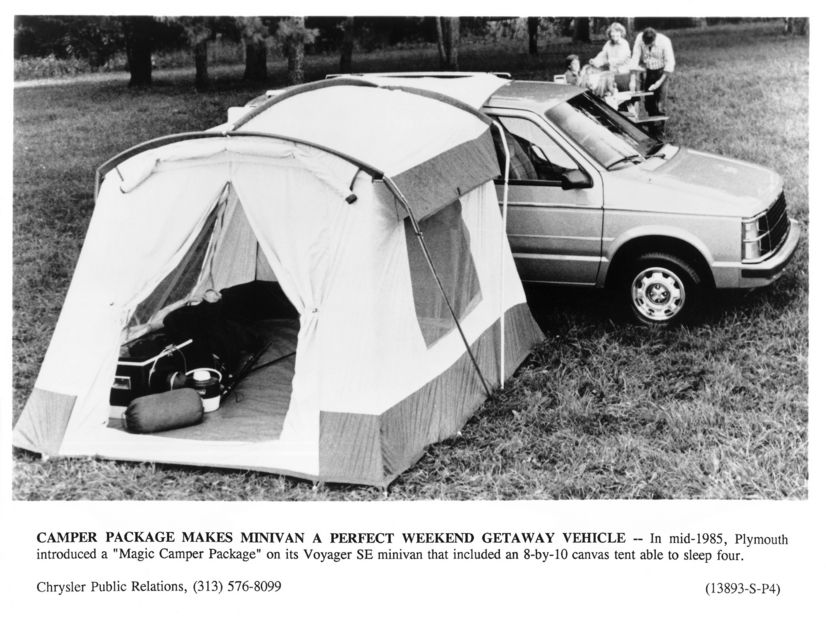 While Dodge vans formed the basis for countless motorhomes during the Sixties and Seventies and numerous Street Vans from the Adult Toy lineup in the Seventies received beds in the rear thanks to factory-provided full-size paper templates, Chrysler didn’t actually offer a camping kit for its vans until it released the short-lived Magic Camper Package for its Voyager minivans in 1985. 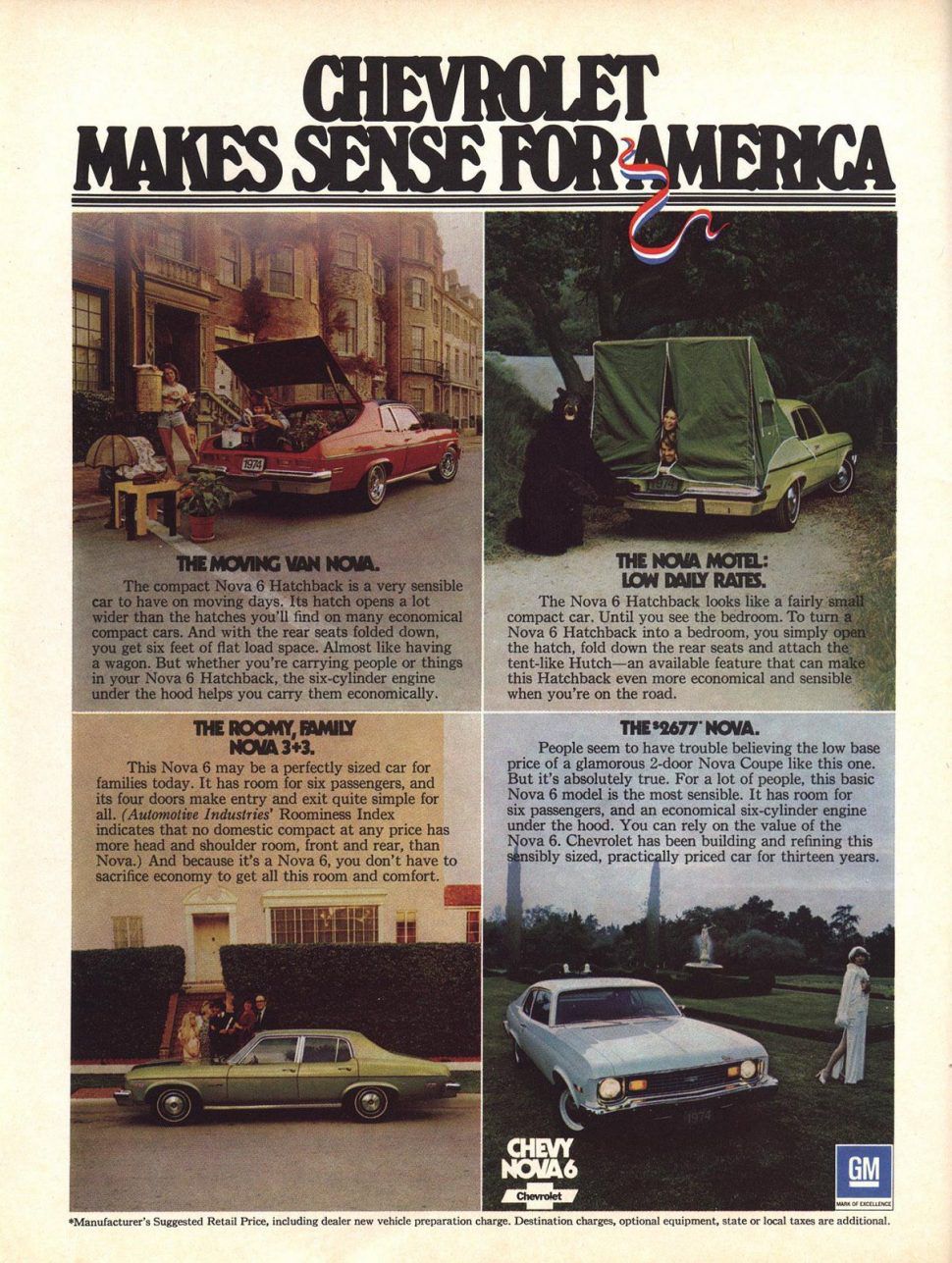 Of course, if we’re going to discuss factory-option tents, we can’t ignore GM’s tents, which debuted at the same time as the Hornet Hutch on both the compact X-bodies (sold as the Hatchback Hutch) and the subcompact H-bodies (sold as the Kammback Kabana). As with the Hornet Hutch, the GM Hutch line was intended for hatchback variants with fold-flat rear seats. However, GM, with its global reach, even developed a similar tent for the Holden LX Torana hatchback (the Hatch Hutch, as seen at top) and the contemporary Torana panel vans (marketed as the Tail Tent). 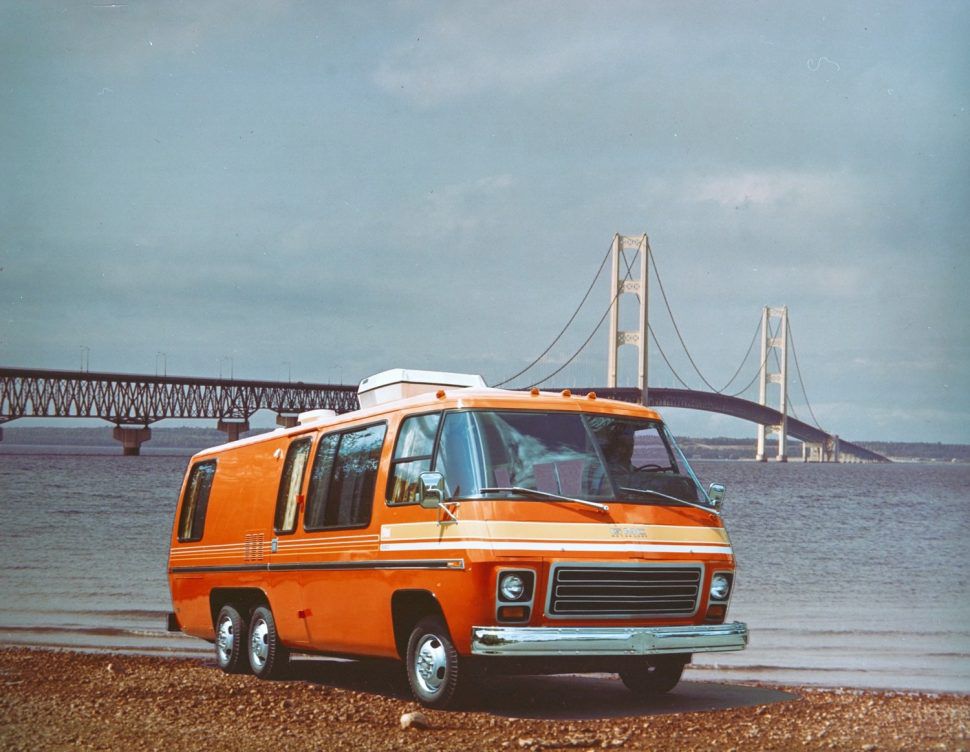 GM reportedly offered a tent package for the LUV truck similar to the Kammback Kabana, though we’ve yet to confirm that. And while they’re not exactly tents, GM did offer a couple truck-based campers from the factory. The most visible and dedicated of them, the GMC Motorhome, debuted in 1973 remained in production through 1978, while the 1976-1977 Chevrolet Blazer Chalet and GMC Jimmy Casa Grande relied on a collaboration with Chinook Mobilodge Inc. to add a camper package atop the short-wheelbase SUVs. 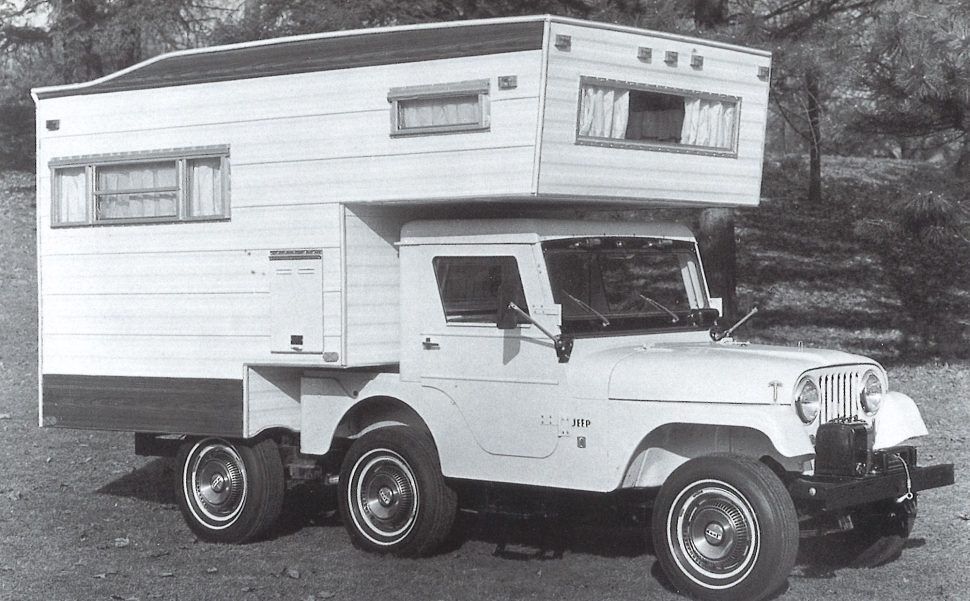 Similar to the Blazer Chalet/Jimmy Casa Grande, Jeep’s late Sixties camper for its CJ-5 intended to transform an SUV into a motorhome. However, with less room to work with, Jeep developed a self-contained unit on a tagalong axle that included a stove, dining table, and beds for three. 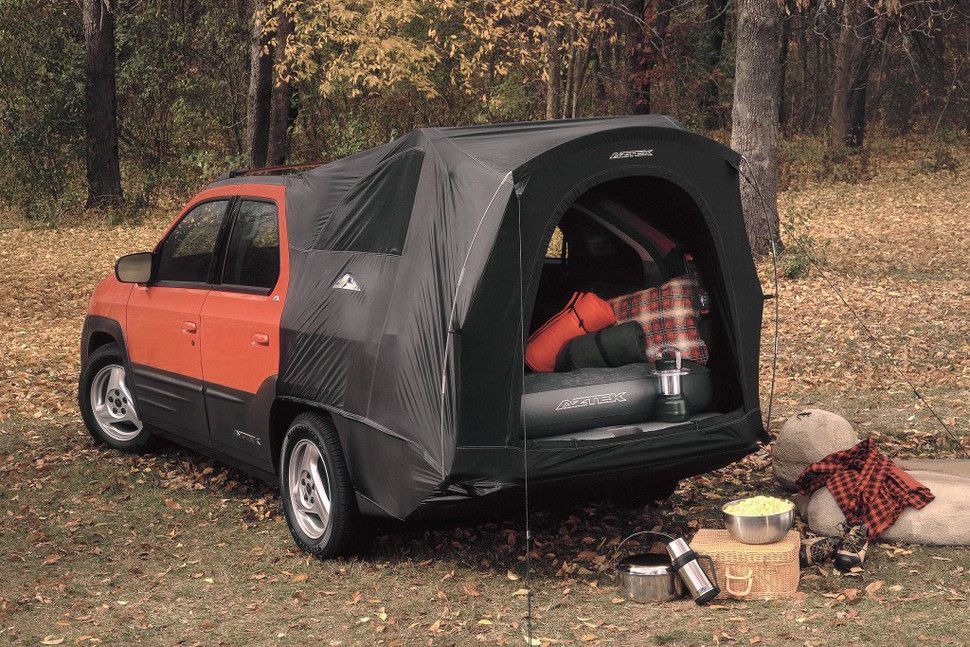 GM factory camper packages and options then reappeared in force in the 2000s, most notably with the camper tent option package for the Pontiac Aztek, which doesn’t appear all that different in concept from the various Hutches of the mid-Seventies. At roughly the same time, GM also offered tent options for the GMC Envoy XUV – the one with the slide-forward rear roof section – and Chevrolet Avalanche.

We also see that Honda got in on the tenting trend in the 2000s with a factory tent package that fit the Element, Odyssey, and Pilot. Then it seems for the last decade or so the carmakers have dropped the idea of offering tents and other camping options on their vehicles, leaving aftermarket outfitters to customize off-roaders for overlanding. At least, that was until Tesla previewed the Cybertruck with an optional camping package; undoubtedly others will follow suit shortly, reviving the auto-based camping trend yet again.