Stranger Things is set before this station wagon should have a CHMSL. No, I can’t get over it.

I have a hard time simply watching a TV show or a movie and immersing myself in a fictional world. For example, when I watch a Mission: Impossible movie, I don’t see Ethan Hunt and (checking Wikipedia) Benji running around Europe to save both the world and his good name. I see Tom Cruise and Simon Pegg on a 20-foot-high screen. Yeah, there’s probably a plot too, but you know, whatever. I look at a room set in the 1940s, and I think, man, where did the props people find all of that cool stuff? Do I recognize an actor, but can’t place where I know them from? I just hit the IMDb app on the phone and an actor’s entire filmed legacy is unfurled before me. And so when people act surprised and (occasionally) outraged when they learn I’ve never seen any of The Godfather trilogy, or Jaws, or The Shining, I don’t feel like I’m missing out. I’ll only see Marlon Brando, Roy Scheider, and Jack Nicholson acting on a screen, rather than (checking Wikipedia again) Vito Corleone’s power, Martin Brody’s fight, or Jack Torrance’s slow descent into madness.

When cars enter the picture, particularly when a modern production is set in the past, my radar goes up. Are the cars right? And frequently, sadly, no they are not. Oh, they mostly are on the money, but the occasional slip-up just pokes me in the brain and takes me even further out of the picture than I already was.

I tried watching the first season of Stranger Things a while back, which is supposed to be set in Indiana in 1983. I spotted a car with a CHMSL, which wasn’t a thing until 1986. And I was out. (Not buying conspiracy theories about cars with CHMSLs in the Upside Down; the resurgence of New Coke was bad enough.) 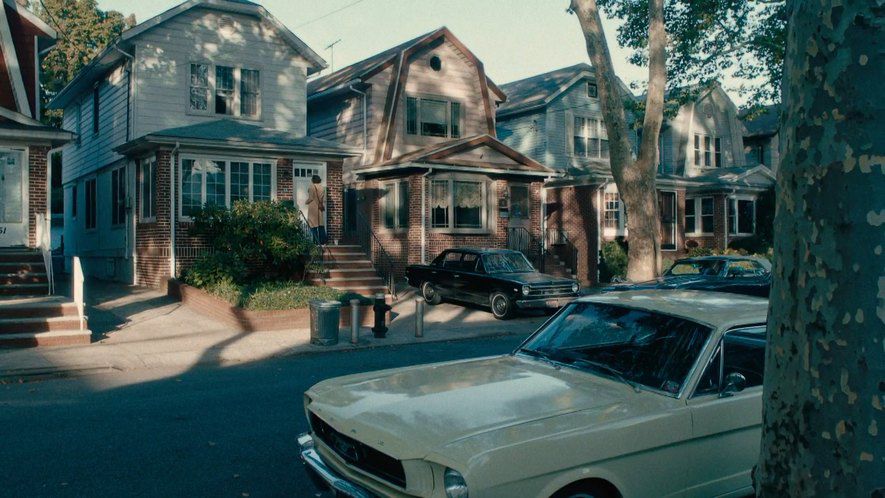 Did the producers of The Deuce think the Rambler American was everywhere in New York, or that people wouldn’t catch the re-use of a background car?

I tried watching The Deuce, on HBO. A black Rambler American caught my eye during one of the nighttime street scenes in the city. Absolutely correct for the era. But in literally in the next scene, Maggie Gyllenhall’s character goes home to visit her mom on Long Island, and what’s parked across the street on a neighbor’s driveway? The same black Rambler. Was this a subtle message that the quiet suburban neighbor was cruising the city for action, some Blue Velvet-style commentary on the seedy dark underbelly of American suburbia, or did they just hope no one would notice? I noticed. Maggie Gyllenhall talking dirty or not, I was out.

This weekend I tried My Name is Dolemite, streaming on Netflix. A perfectly serviceable biopic, and I even made it to the end. But there was a Prius floating by behind Eddie Murphy’s head in one street scene, a blue seven-digit California license plate on the trunk of the Cadillac parked in a driveway (and not even starting with a 1!), and the egregious limo-to-the-premiere scene, with a tan Suburban in the limo’s blind spot, desperately trying to disguise the fact that none of the traffic passing in the background was anywhere near 1975.

Sasha Baron Cohen was in something called The Spy. He was the best spy I’d ever seen: He uncovered a 1963 Corvette in South America in late 1961, and less than a year later was at a party when a 1980s-era Lincoln stretch limousine pulled up.

I tried watching the second season of Mindhunter. In the opening scene of a season that starts in 1980, there’s a Chevy Celebrity out in front of the church. They didn’t arrive until, what, the early days of 1982? I stuck with it, despite that.

Mindhunter let a post 1982 Chevy Celebrity slip into a scene set in 1980. I pressed on watching regardless.

I’m constantly scanning Mr. Robot for cars that are beyond the 2015-era brief of the show. In one episode, they lit a Ford Transit van on fire; I had to check to see if it was right, and it was: Transits have been around since mid-2014 as a ’15 model. I felt better.

This isn’t a new affliction. Anyone remember the sequel to A Christmas Story, My Summer Story? Don’t be sad if you didn’t. It died quickly in theaters (with just $71,000 taken in during its mercifully limited release), perhaps in part because some 1941-era Indiana car antics appeared to take place on some early 90s-era Los Angeles city streets. The Dukes of Hazzard used to use round-light B-body Mopar sedans, stacked-square-light B-body Mopar sedans, and (occasionally) AMC Matadors interchangeably. As if they’re all the same. And I once freaked out my mom, watching an old TV movie about the Son of Sam killings (or something that happened in the ’70s, anyway) and quibbling about the ’83-era aero-nosed, downsized Fox-body Ford LTD the cops drove around in. (I’m pretty sure that I’m remembering Out of the Darkness, a CBS made-for-TV movie starring Martin Sheen and Hector Elizondo.)

Maybe that’s why I watch pro wrestling on Wednesday nights: I can switch my brain off and just be overtaken by the moment. Precious few cars involved, you see. I can’t be the only one so afflicted. Can I? Other than the inevitable De Lorean that didn’t belong in 1955 with Michael J. Fox, which was apparently the point of the movie, what out-of-time TV or movie car error pulled you out of the picture?